Indio, California: Dave and I have returned to our motorhome, patiently waiting for us, at the Motorcoach Country Club. We thought we were so smart, getting out of Las Vegas early in the morning, before the official hotel check-out time and before all the hung-over hipsters pointed their cars back to Los Angeles.

Our clever plan did not turn out very well.

Our modern age made it possible to check-out of our hotel room by pushing a few buttons on my phone. Receipt was emailed immediately. Done and done. We only had to wait about five minutes for the valet to bring our car. The parking attendant pulled up, slammed on the emergency brake and handed us the keys. When we opened the hatch to load our luggage, we found everything spilled about like someone had flipped our car over. What was going on? Everything previously on the console was strewn on the floor of the passenger seat. Looks like "someone" took a corner at 90 miles per hour in the parking garage??? 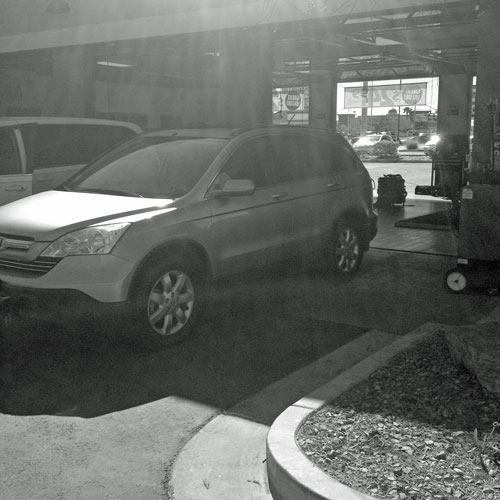 After we had settled-in, DT could not get the BRAKE light to go off when he released the emergency parking brake. We tried several times and restarted the car. Nothing. We pulled away and could tell the parking brake was not engaged, so knew it was either low on brake fluid, the switch was broken or several other more expensive options. We found a nearby lube/oil/filter place and luckily learned the car only needed brake fluid - a $5 solution. However, since we were already there and the crew had checked so many things, we went ahead and had a needed lube & oil job on the car. 90 minutes later, we were back on the interstate, pointed west... with about a million other tourists and the two UCLA fans on their way back to Los Angeles. Traffic came to a complete stop many times and the rest of the time we were crawling.

Being stopped on I-15 gave me opportunity to snap a few photos of the Ivanpah Solar Electric Generating System just over the California border near Primm, Nevada.

When they first started construction, we thought it was just another of the usual solar energy collection plants in the California desert... until they started building three tall towers. 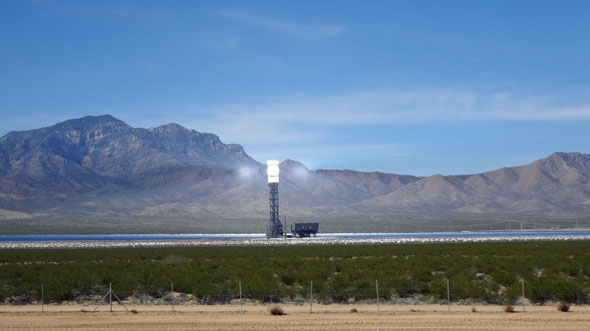 What appears to be a blue lake in the center of the above photo are some of the 350,000 garage-door-sized computer-operated mirrors in the power plant. Three 460 foot tall towers are filled with water and the mirrors are programmed to rotate and capture the sunlight to reflect the light onto the water tank... which boils the water... producing steam... which turns a turbine that produces electricity. Sounds like someone won their high school science fair project! 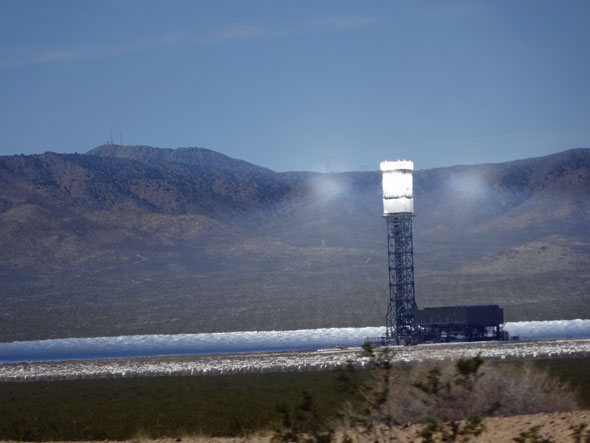 The plant generates enough electricity to power 140,000 homes and employs 90 people. Pretty interesting the stuff you can find the desert... especially when you are driving 5 miles an hour down the freeway.

We left I-15 at Barstow and took the "back way" towards Joshua Tree National Park and arrived home at 4p. What a very, very long day.

Did I mention it was 92 degrees?

Though we had only been away four nights, we found a few surprises waiting for us: 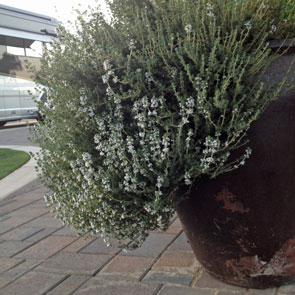 My little tomato plants have set fruit! I bet there are ten tomatoes already. So exciting - and the thyme is blooming and is simply gorgeous.

We learned (via the radio) the Ducks drew a 7th seed and will face BYU in the first round of the NCAA tournament on Thursday, March 20th, in Milwaukee. The game will air on TRU TV at 12:10p pacific.

After unpacking, I ran out to the grocer and was blown-away at what a shopper was wearing. This is coming from a woman who has just spent four nights in Las Vegas where I saw enough butt cheeks hanging out of booty shorts to last a lifetime. 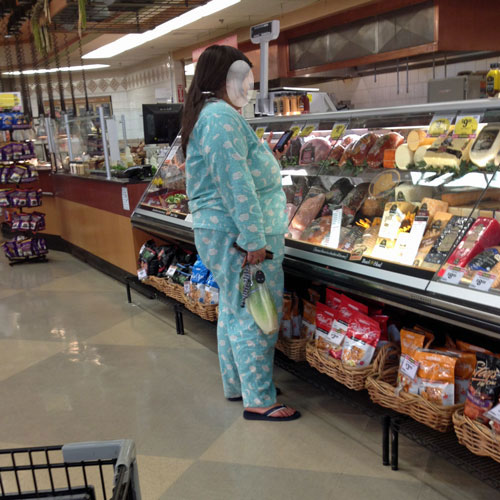 Who wears their flannel jammies to the grocery store? It was 5p. It was 92 degrees. Seriously, people, look in the damn mirror before you leave the house.

Until my next update, I remain, your "wouldn't a negligee be more appropriate?" correspondent.