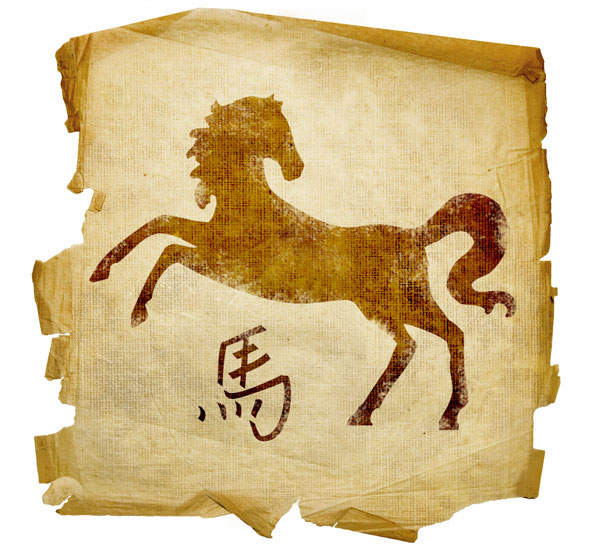 This is the Year of the Horse, so something tells me 2014 is going to be a very good year for a certain little equestrian: 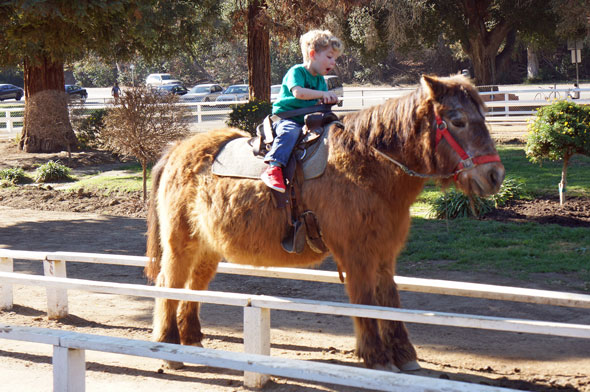 We are calling 2014 the Year of the Horsie, though.

The Year of the Horse is starting well for the Duck men's basketball team. After a blazing start to their season, they have fallen on hard times (now 15-6 - ouch). The Ducks beat the USC Trojans at home this afternoon and, to celebrate his 76th birthday, tonight was Phil Knight Bobblehead Night! 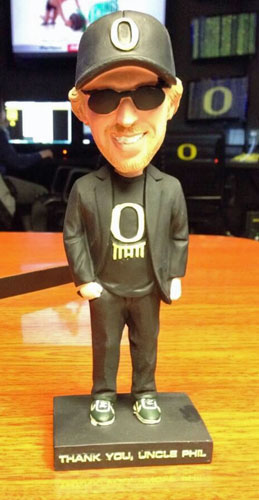 As the University of Oregon's favorite and most generous alum, the students refer to Mr. Knight as "Uncle Phil". As they should, but it still cracks me up. All I'm saying... the person sitting in my seat - using my game ticket at no cost - had better save that bobblehead for me!

The Palms RV Resort, where we are camped, hosted the 5th Annual Boomer Bash Car Show today, and a Burger Bash fundraiser to raise money for three local charities. So many pretty old cars were on display. I am going to state right now that I don't know a thing about cars. I don't even care about cars. I drive a seven year old Honda CRV. It starts, the radio and air conditioning work, and it is paid for. This lack of interest or knowledge does not stop me from looking at the pretty shiny things and taking photos for My Readers who do enjoy vintage automobiles. That said, if there are any errors in my note taking on the vehicles below, please forgive. 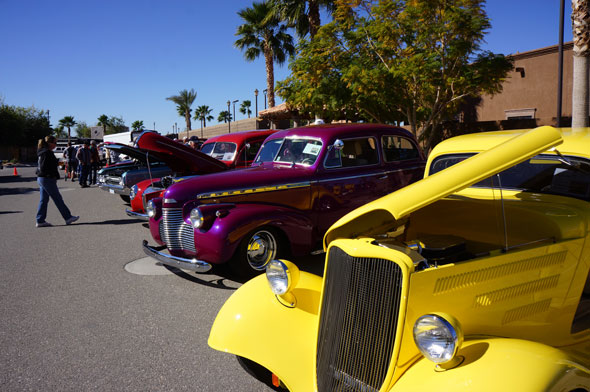 Cars lined-up all around the RV resort. 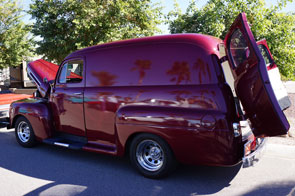 The pretty 1948 F1 Ford Panel truck once was a rusted-out chunk-o-junk. The owner has restored it with a 5 liter (302) Ford engine, AOD transmission, Ford Explorer 8.8 rear end, 4 wheel disc brakes, air conditioning and cruise control. If you are going to kidnap anyone, might I suggest you use this vehicle? 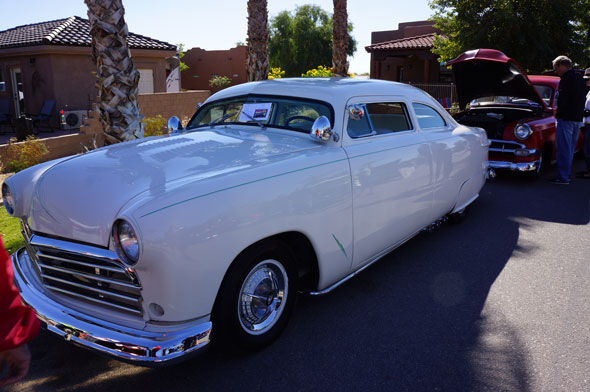 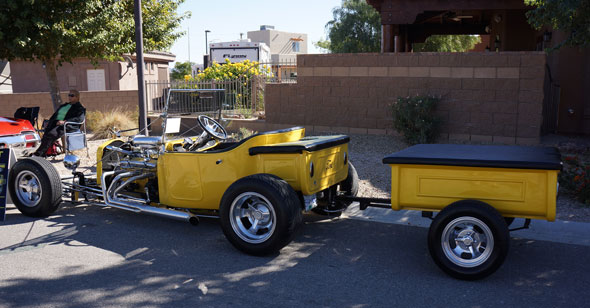 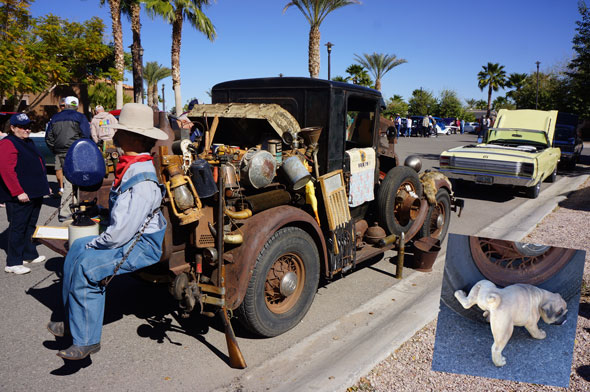 1949 Ford Pickup - this one was decorated as an old prospectors truck
- complete with a ceramic dog peeing on the tire. Very cute. 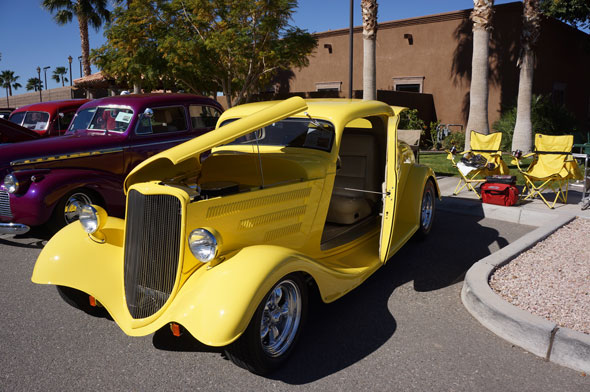 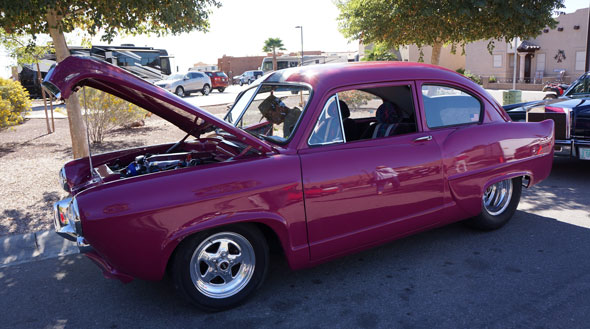 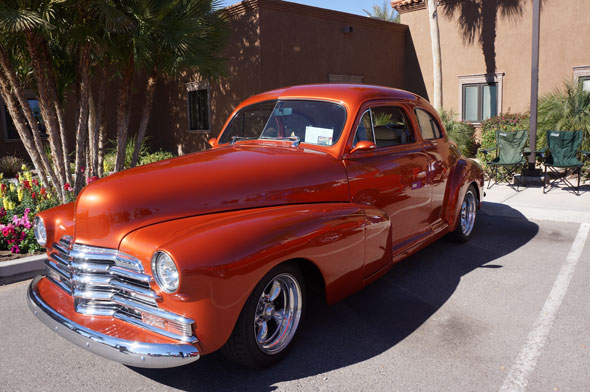 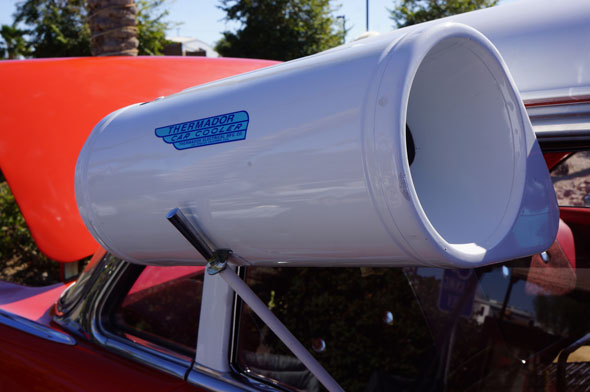 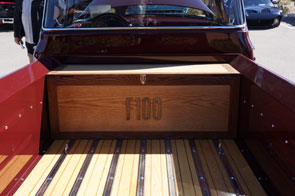 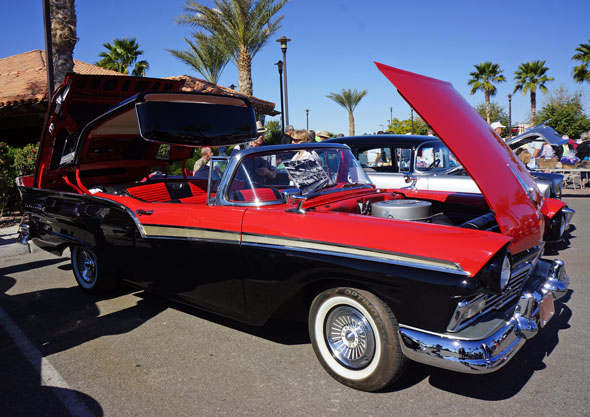 1957 Ford Fairlane Skyliner: the trunk lifts up, and the roof drops down into the trunk! 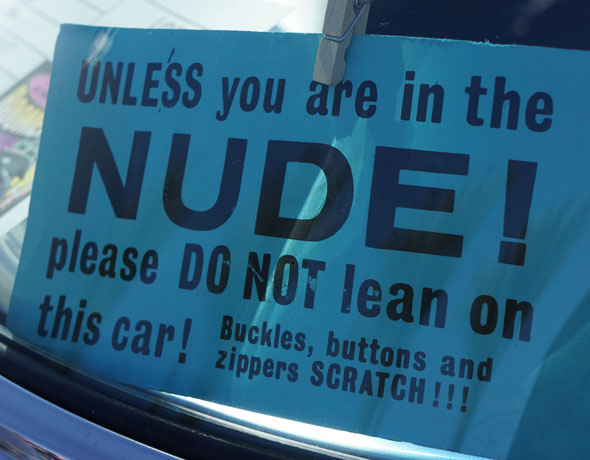 I did not lean on the car while snapping this photo! 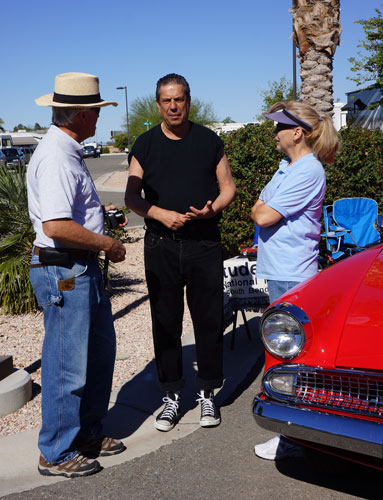 Last night, Jon Bauman (center, Bowser from Sha Na Na) played a concert at the RV park. Today, he was hanging around, checking-out the cars and posing for photos with his fans. Bowser is 66 years old. 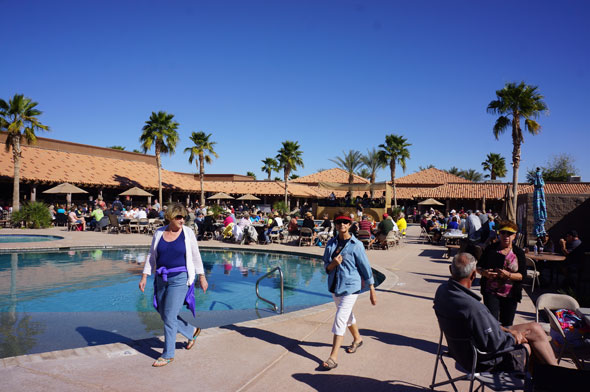 The burger (and beer) fundraiser was really well attended - hundreds of people showed up for lunch around the huge swimming pool at Yuma Palms.

We didn't stay for lunch after touring through the car show. Dad, Mary, Renee, DT and I drove into town for lunch at one of the most popular Mexican joints in town. This place is so ancient, Dave's Dad used to visit it when he was in the military - Chretins. 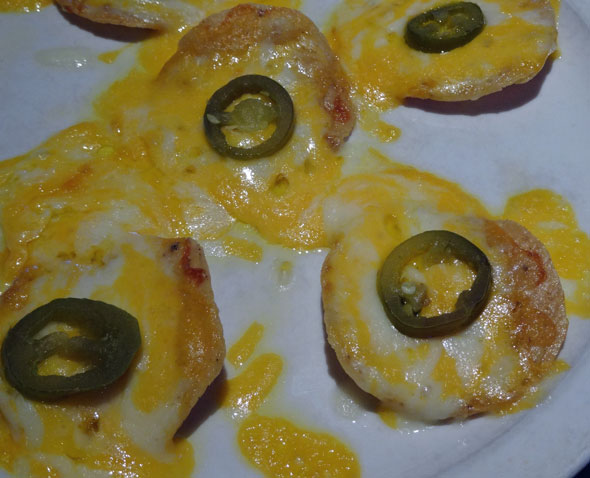 Pronounced Chit-eens, Chretin's used to be downtown in an ancient old adobe building. The front of the restaurant was actually boarded-up, giving the impression it was closed/out of business... but if you drove around back to the parking lot, you would find the back door - the only entrance to the restaurant - through the kitchen. For some reason, the building was condemned and they moved several years ago to an empty shell that once housed a national chain restaurant. The atmosphere isn't the same, and the food doesn't seem as spicy. Chretin's "signature" dish is their nachos (photo above), and the Navy Airmen would have contests to see who was the best fire-eater. The record is now around 190 nachos, but since Chretin's now use pickled jalapeno slices, the nachos aren't even spicy. Leo could eat them.

It was great spending the day with our family and tomorrow we will gather together again for the big Super Bowl Party!

SLOGGER REPORT: Day of Rest. Sad to start the month with zero-mileage, but Saturday is my day of rest. Feh.

Until my next update, I remain, your Yuma correspondent.

RV PARK: The Palms RV Resort - we have a large back-in site (I think they are all back-in sites) with 50 amp, water, sewer, cable and free wifi. Pool, bathhouse, laundry, etc. We are paying about $48 per night. 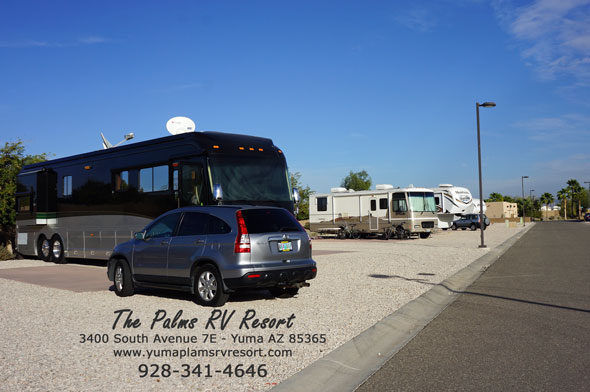