Santa Barbara, California: Another day of fun with the kids. We did have a late morning, as I decided taking two kids through the buffet line was too much of a chore for me before coffee. We waited for Bubba to finish his work-out and shower, so we didn’t get to breakfast until well after nine o’clock. (No worries, Lisa, your kids had a piece of left-over pizza from the mini-bar fridge before breakfast. Breakfast of Champions.) Everyone ate well and fueled-up for our morning adventure. The hotel gives each room a two-hour free rental of a bicycle surrey, and the carts are parked literally just outside our patio, so the kids have been asking when when when. There are several different size carts, but we opted for the smallest surrey. Lucy was too small to even consider as a fuel source. Leo could only reach the pedals if he was pedaling standing up. I could just barely reach the pedals, but Leo always wanted to pedal… meaning our power came 90% from poor DT. Sadly, I did not get a photo of us all on the little cart, but we rode it all the way down to the harbor. The fog was thick this morning, but the temperatures were warm. We parked the surrey and walked down to the end of the breakwater. 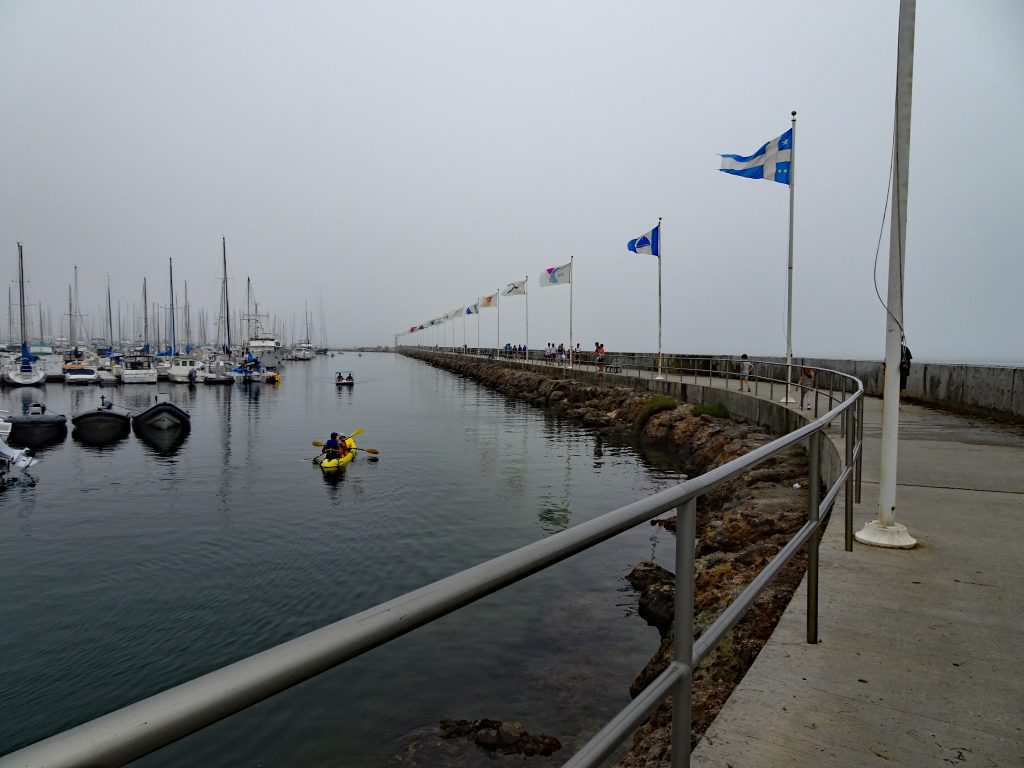 We watched a sail-less sailboat being lifted into the water, and the kids posed for me on a massive anchor. 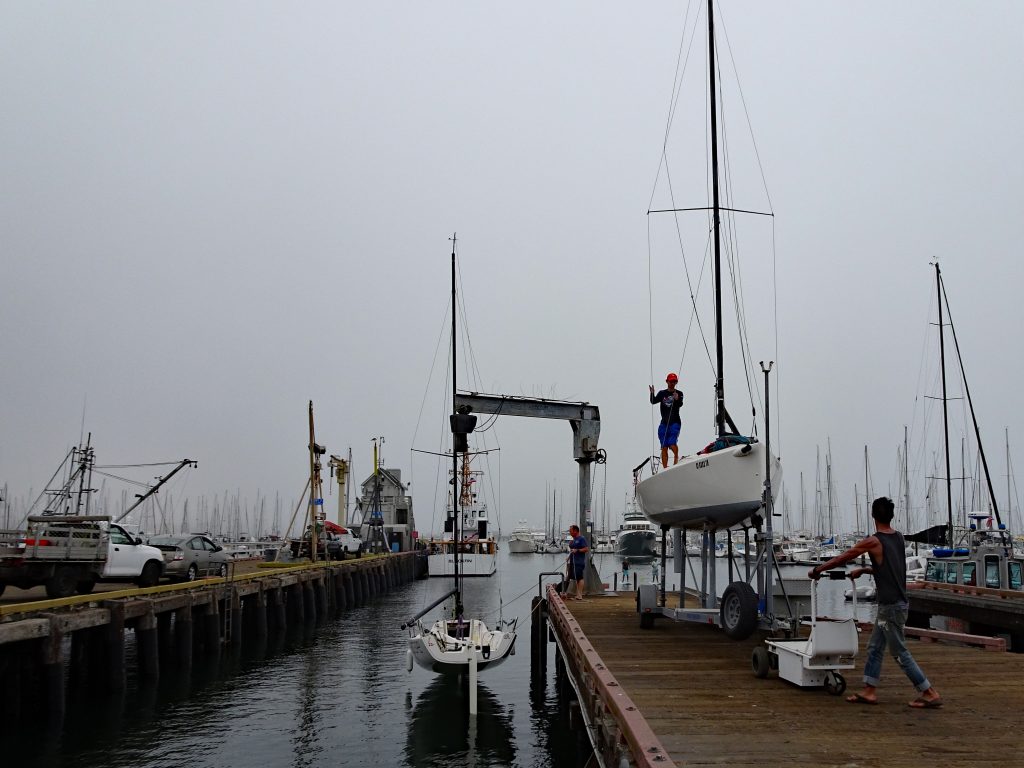 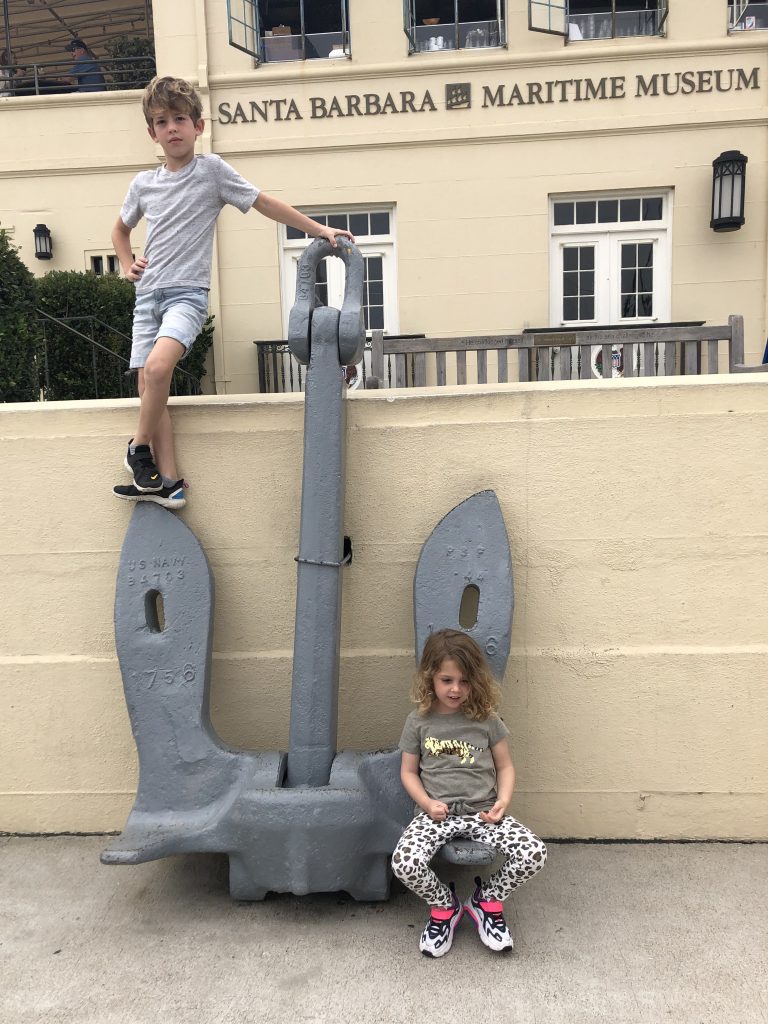 The sidewalks (adjacent to the bike path we were required to use) were lined with booth from an art fair. Lucy wanted to see the paintings, so she and I walked about half-way back to the hotel, while Leo and Dave rode the cart. The child was fascinated with the colorful paintings, glass, fiber art, metal, and jewelry. Several times she asked how could someone make that, so I suggested she ask the artist (usually sitting right there behind a table). It was impressive how the craftspeople explained their skills so a little kid could understand their methods.

Dave and Leo met us to return us to the hotel, where we had a nice swim before heading out on our evening adventure – a cruise on the Azure Seas with Celebration Cruises. 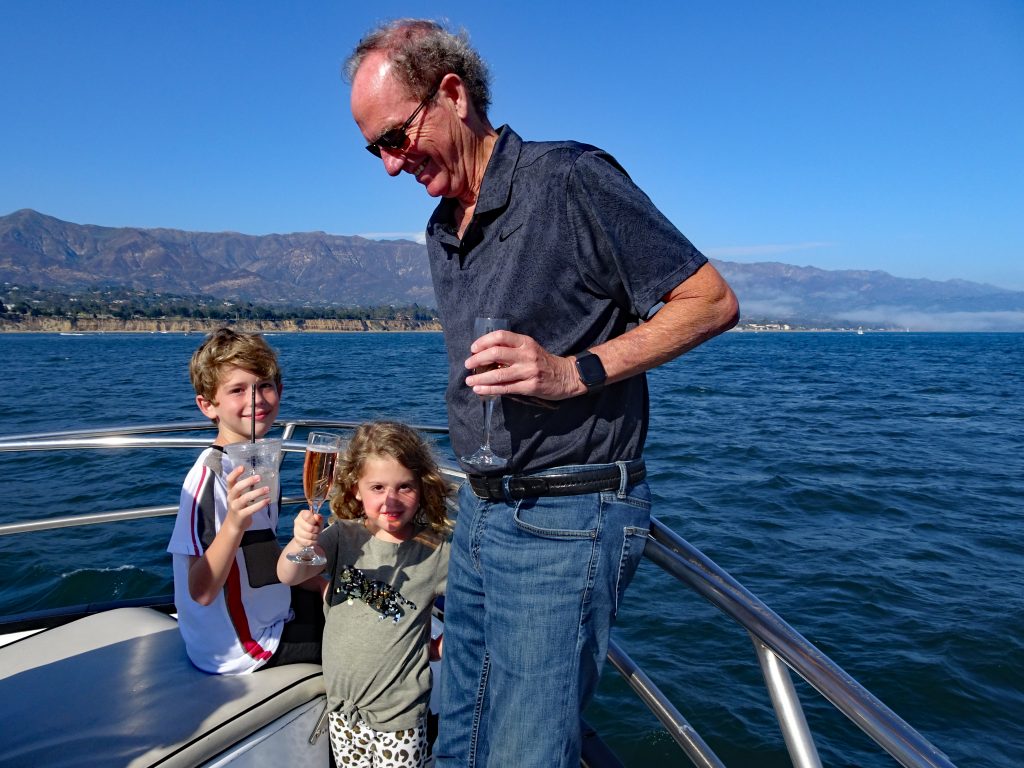 Lucy volunteered to hold my sail-away toast while I snapped this photo. The sun had finally burned-away most of the morning fog and we cruised from the embarkation at Stearns Wharf, north to the harbor, then south to Montecito, finally returning to Stearns Wharf. 90 minutes in all. 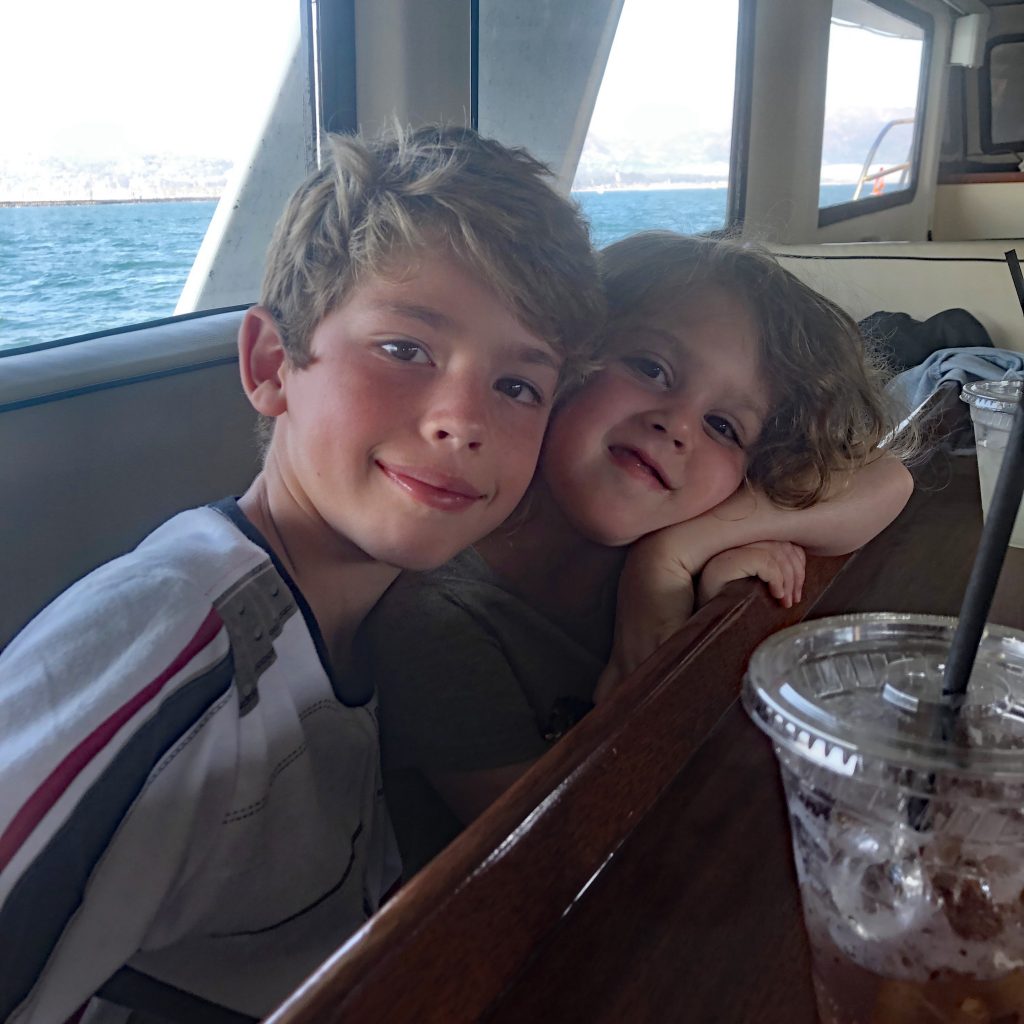 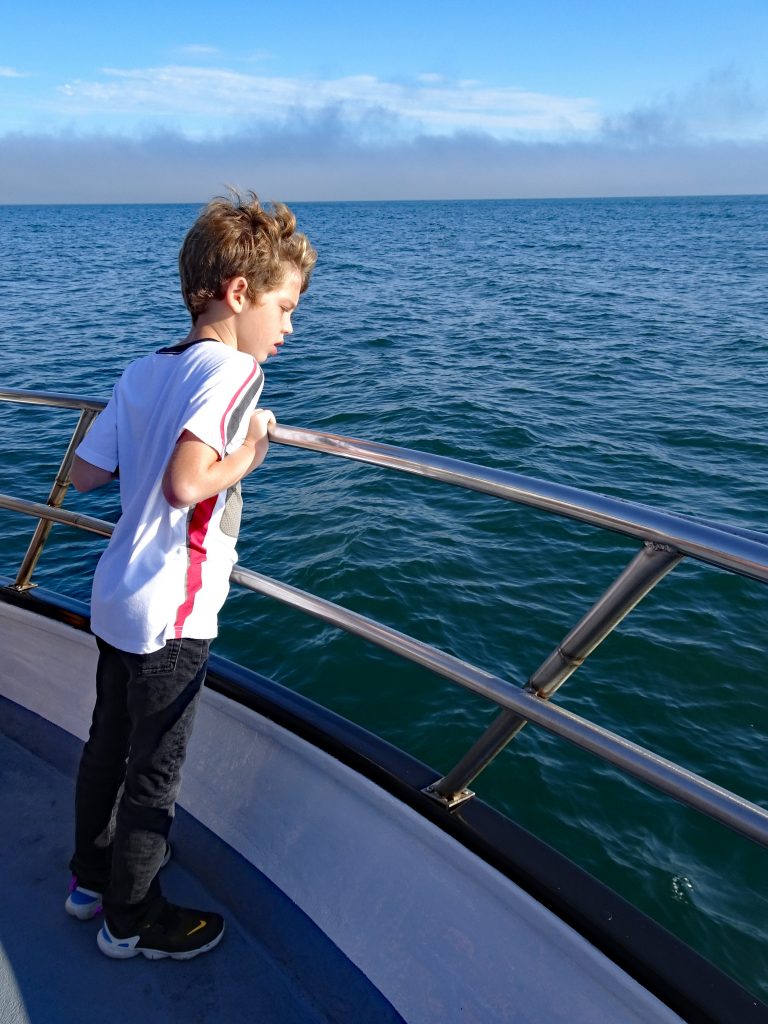 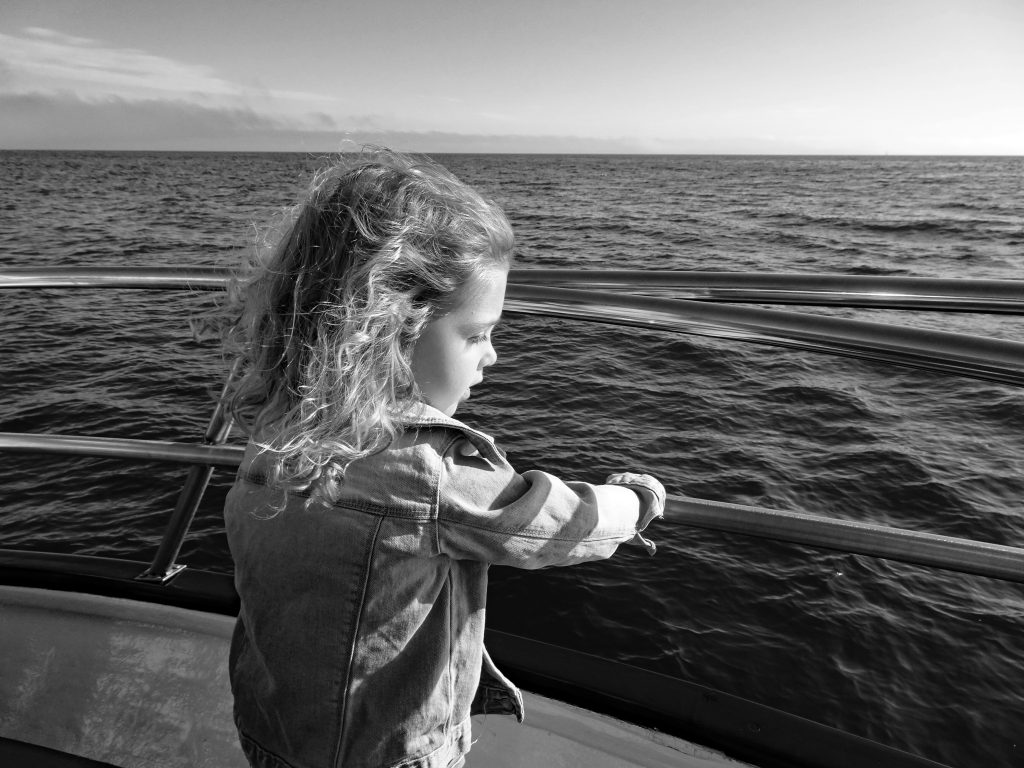 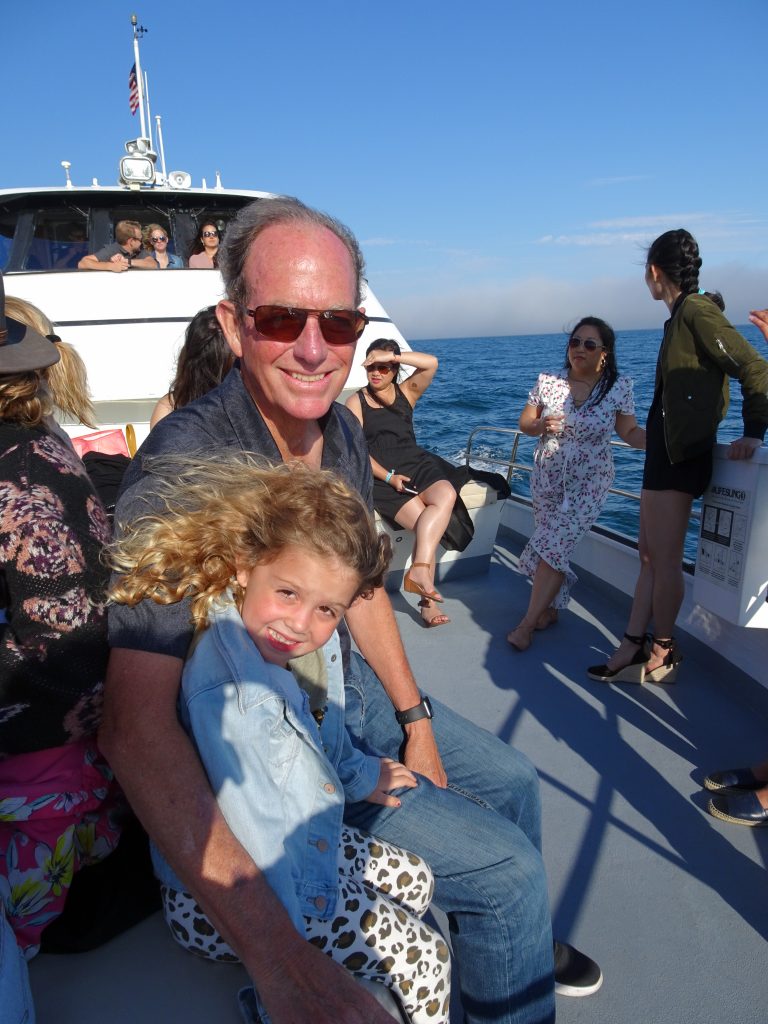 It was windy up on the bow of the boat, but that is where Leo wanted to ride. The Captain paused for quite a while alongside a buoy loaded with sea lions: 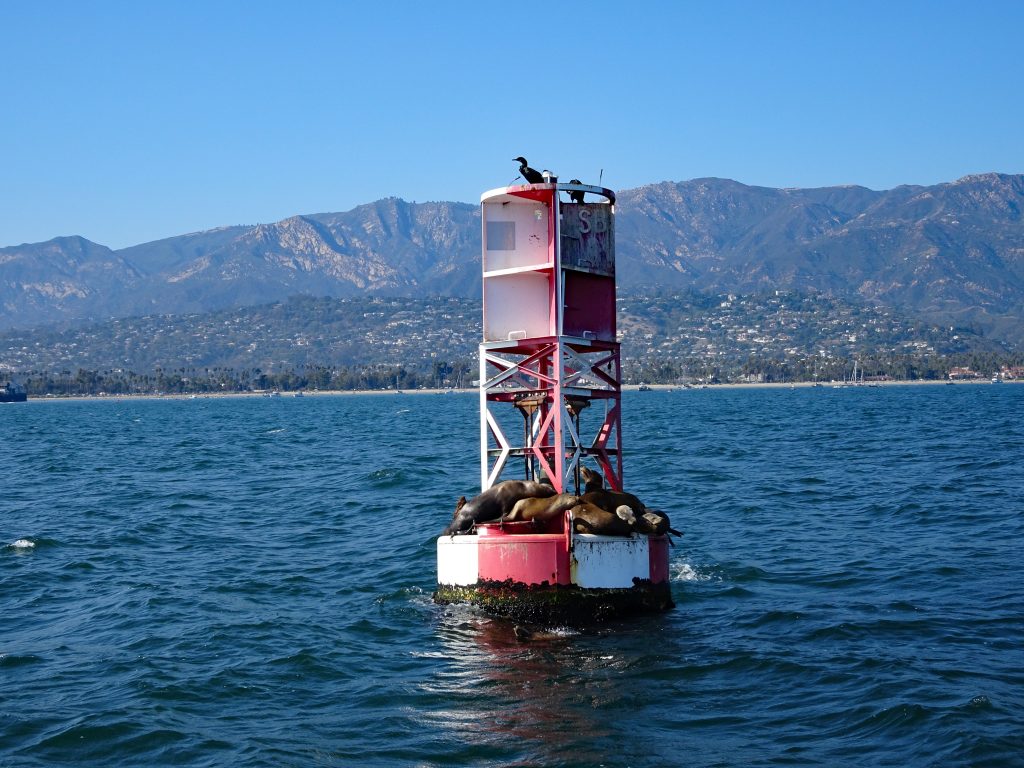 Of course, the usual jostling for sleeping space was in full fighting mode. Basically, sea lions are goats who live at the sea? 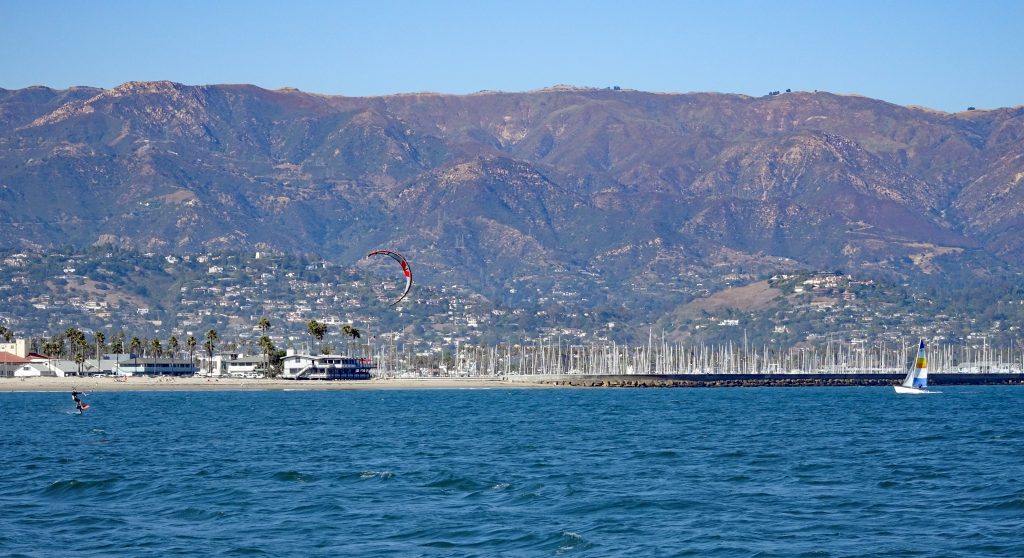 I had made dinner reservations at a touristy seafood place on the wharf. Moby Dick Restaurant is not the most highly-rated joint in town, but I knew the kids would love the “ambiance” of dining on a pier over the sea, and Leo is crazy for seafood and shellfish. (In the end, our meals were quite good and our server was super.) Leo and Dave ordered a massive (and massively expensive) steamed seafood monstrosity of mussels, clams, and shrimp poached in clam juice – with a huge Dungeness crab on top! 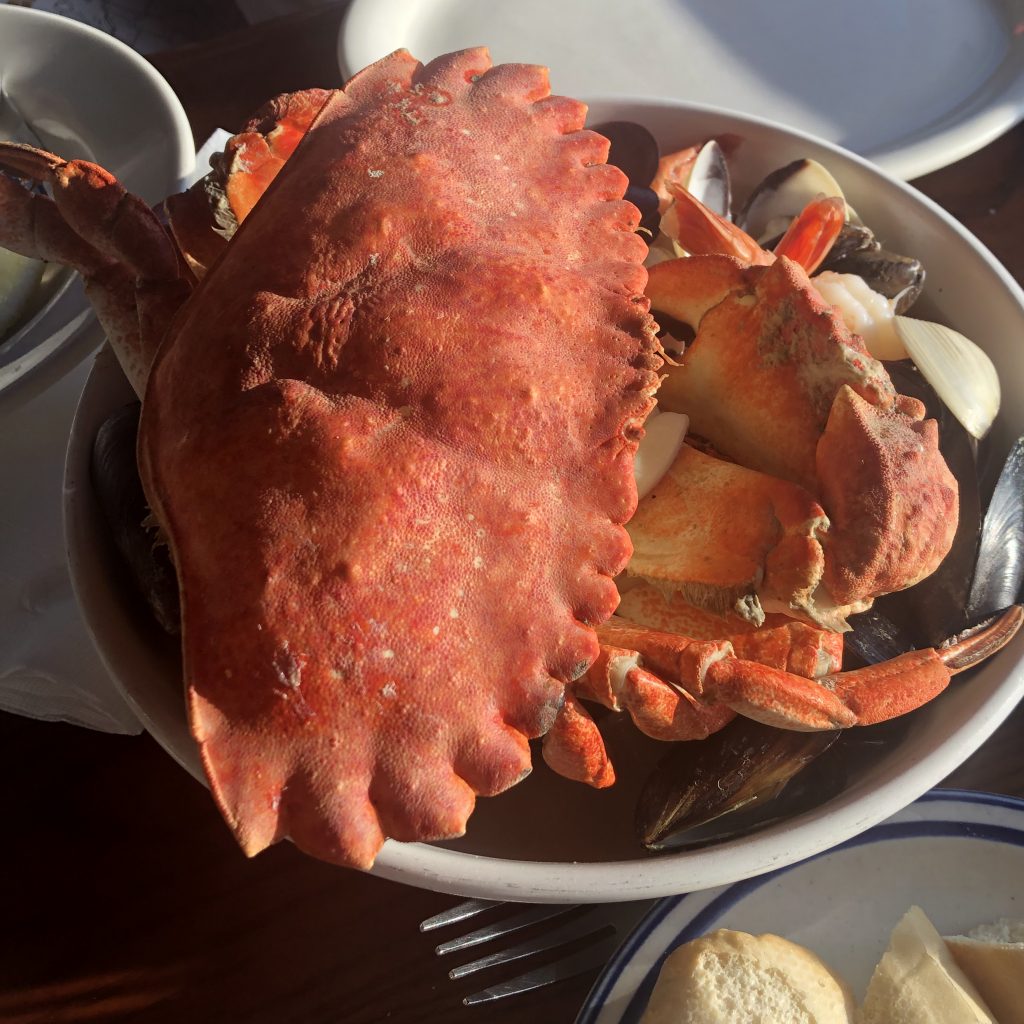 I ordered snapper fish and chips. Lucy ordered nothing, just ate from our feasts. Dang if Leo, Lucy, and DT didn’t finish the entire steamed mess. 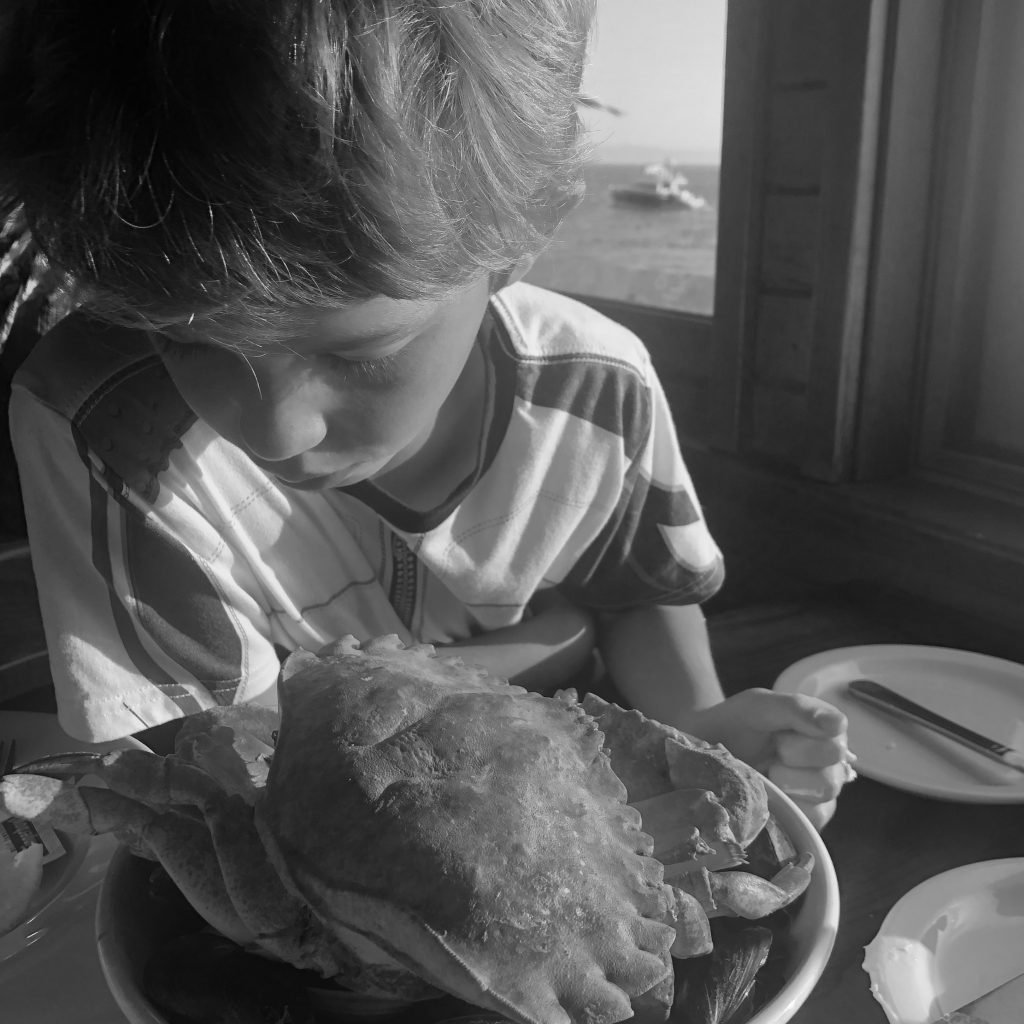 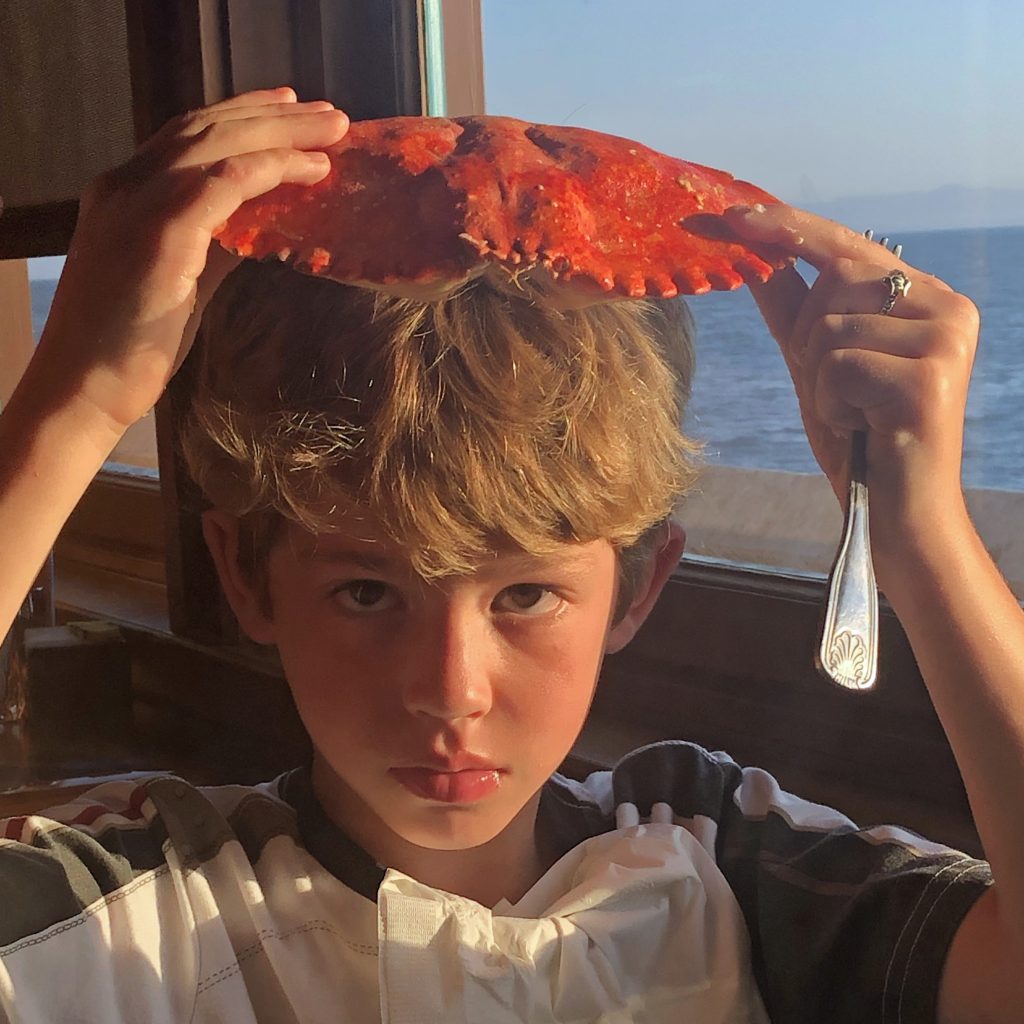 We had a stroll through the gift shops, didn’t buy a thing, though I could have been tempted: 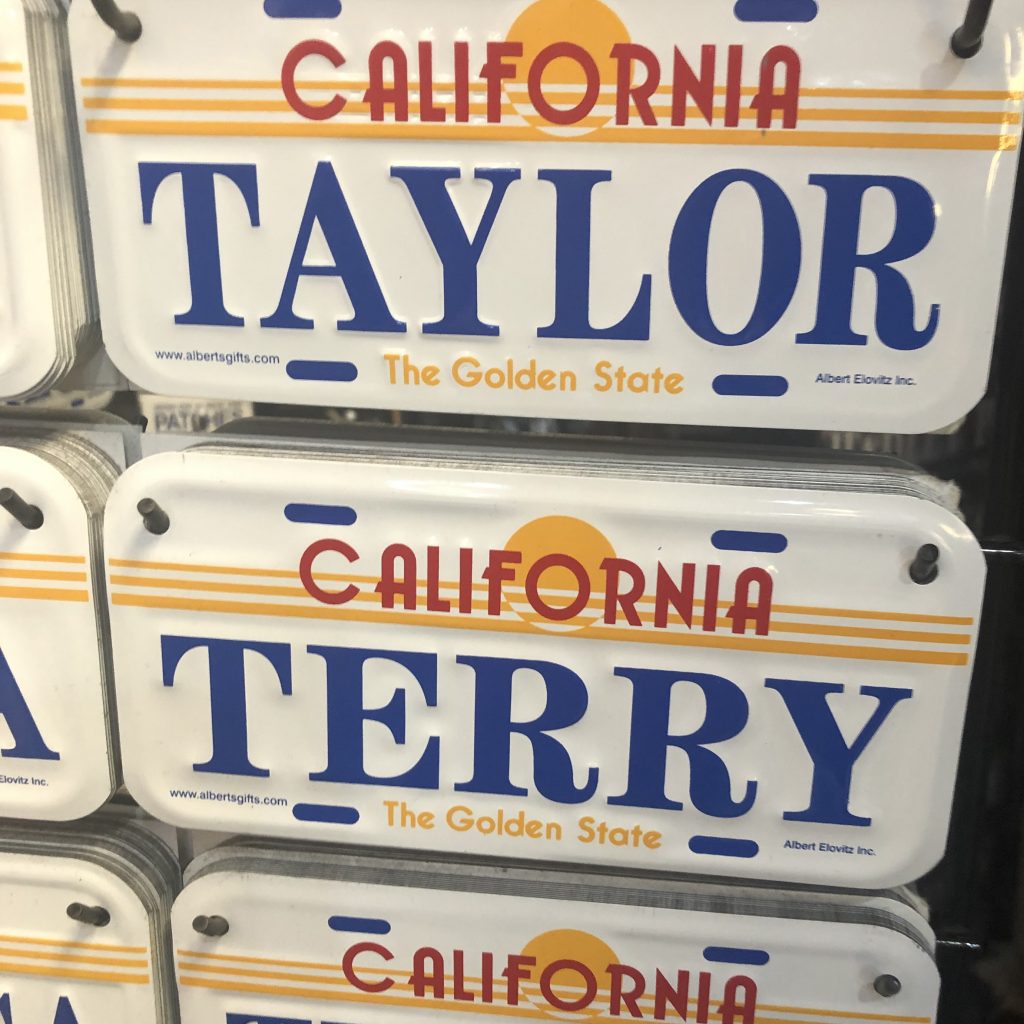 Back to the hotel, with one last play session with two little girls from San Francisco Leo and Lucy have been partying with all weekend. The rosé trailer was towed away, the s’mores firepit was extinguished. Looks like the Labor Day party is over at this hotel.

Until my next update, I remain, your land-lubbing correspondent.