Santa Barbara, California: Another beautiful day in Santa Barbara, but foggy near the shore. I took the kids to the breakfast buffet while DT went for a jog. I am not a fan of most hotel buffet breakfasts, but the one at the Santa Barbara Hilton Beachfront Resort is first-rate. Not to mention, Lucile was free and Leo was only $12. The kids ate well, while I had a veggie omelet from the menu. DT ate my toast (and half of my eggs) after his run. The kids also enjoyed a little table tennis game next to the breakfast area. 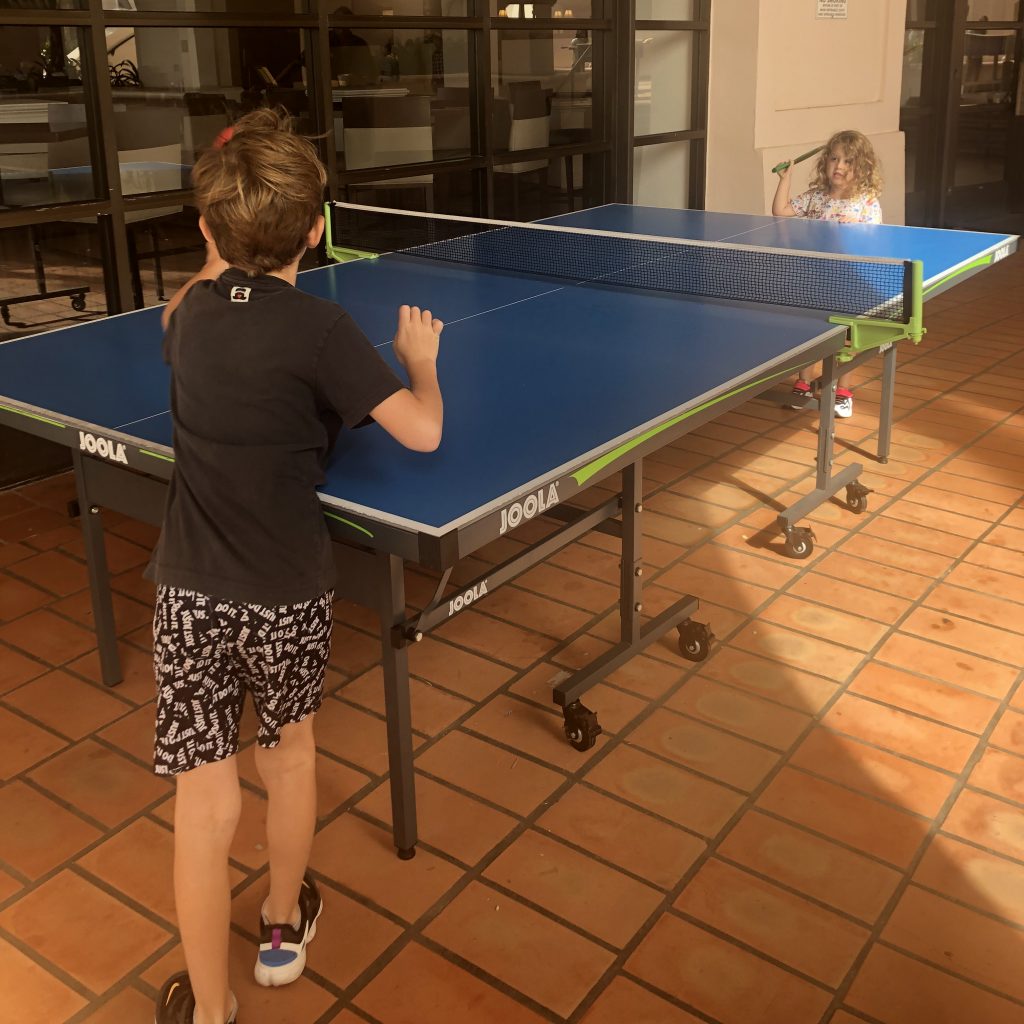 After breakfast, we walked (less than a mile) to the the Santa Barbara Zoo, stopping for a perfectly Instagrammable moment along the way… 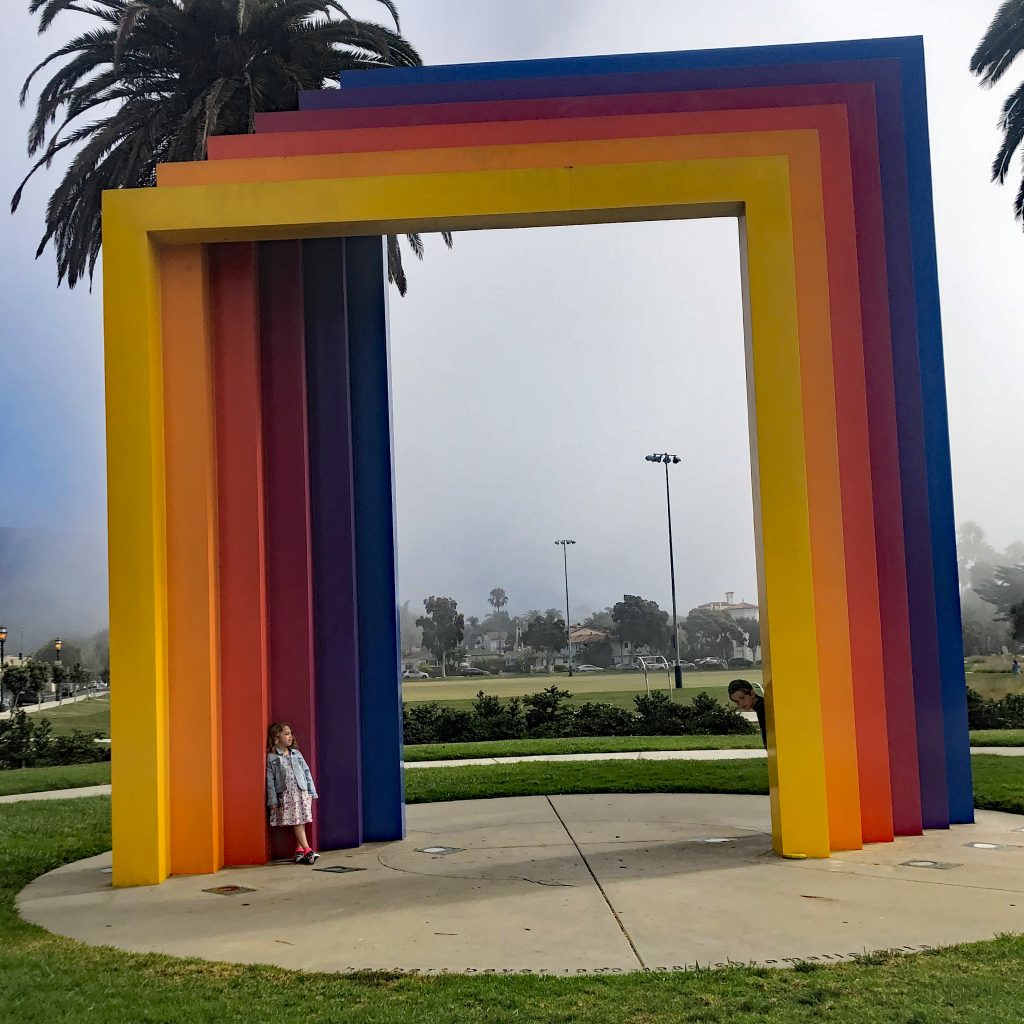 The Santa Barbara Zoo is small, but the animals are well-displayed and have very nice enclosures. They have an Asian elephant, a lion, several zebras, and quite a lot of California reptiles and birds – including condors. 500 animals in total. 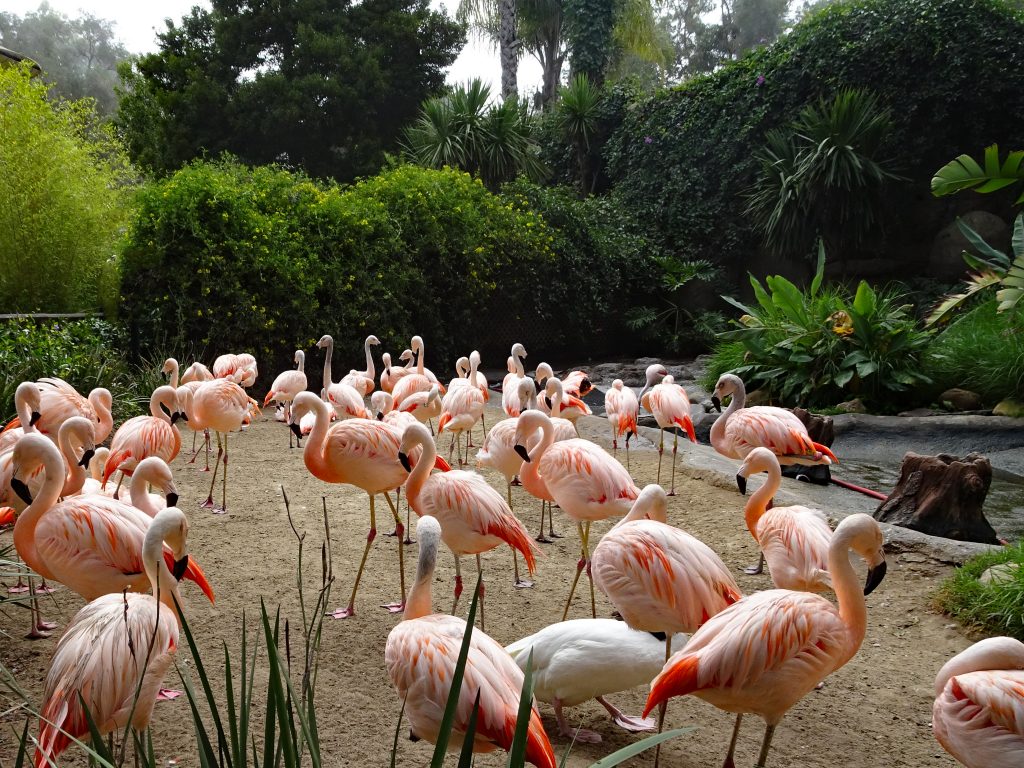 Please notice the white goose in the center-bottom of the above photo. The flamingos were “escorting” the poor goose out of the area! Move along – you are not welcome here.

After exploring the zoo for a while, we came upon an amphitheater with a T-Rex on stage. DJ was a most impressive dinosaur and had all the kids at attention. 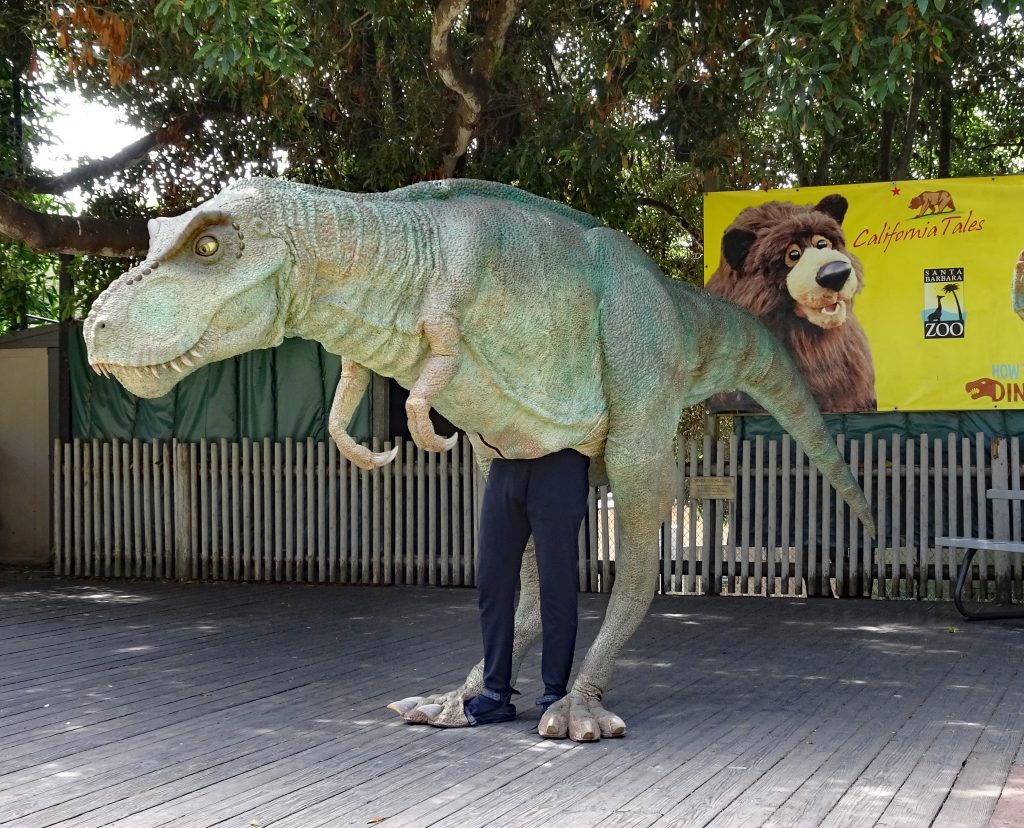 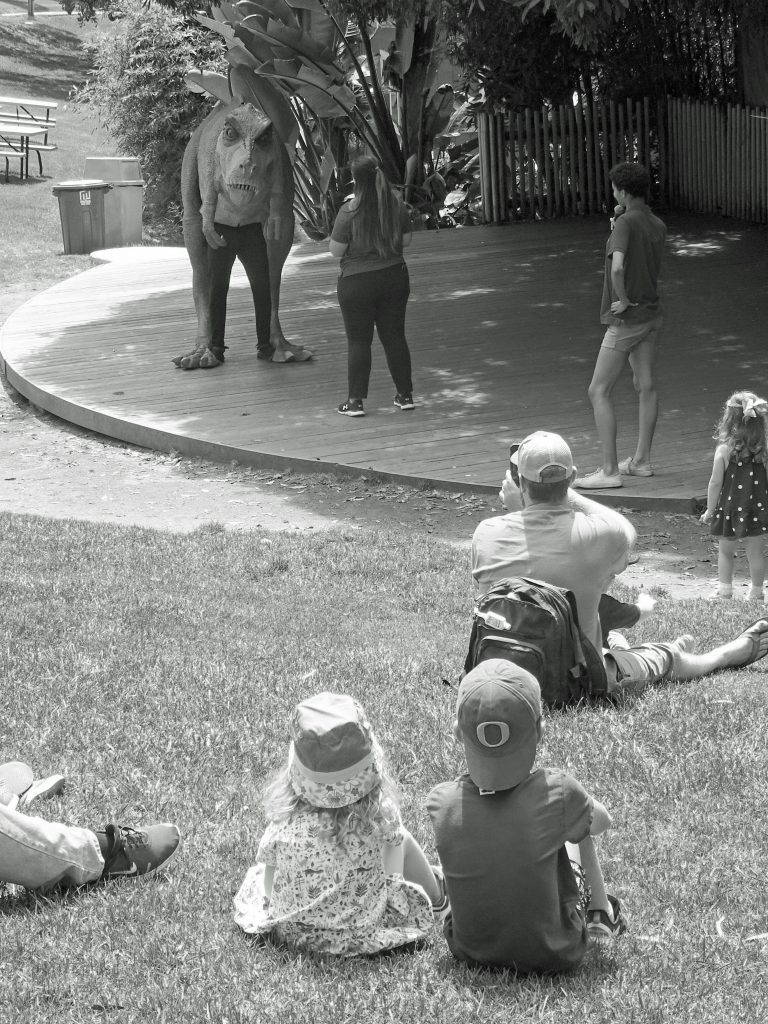 I can’t imagine how strong the person inside the massive costume must be. The neck, head, and jaw could move – and the dinosaur showed quite a bit of personality for a dummy. The zoo trainers on-stage were asking DJ the T-Rex if he had brushed his teeth this morning… which was pretty funny… as how could poor DJ reach his mouth with those tiny little arms? His breath was claimed horrid, so the staff asked DJ to go into the crowd and choose a volunteer to brush his teeth. 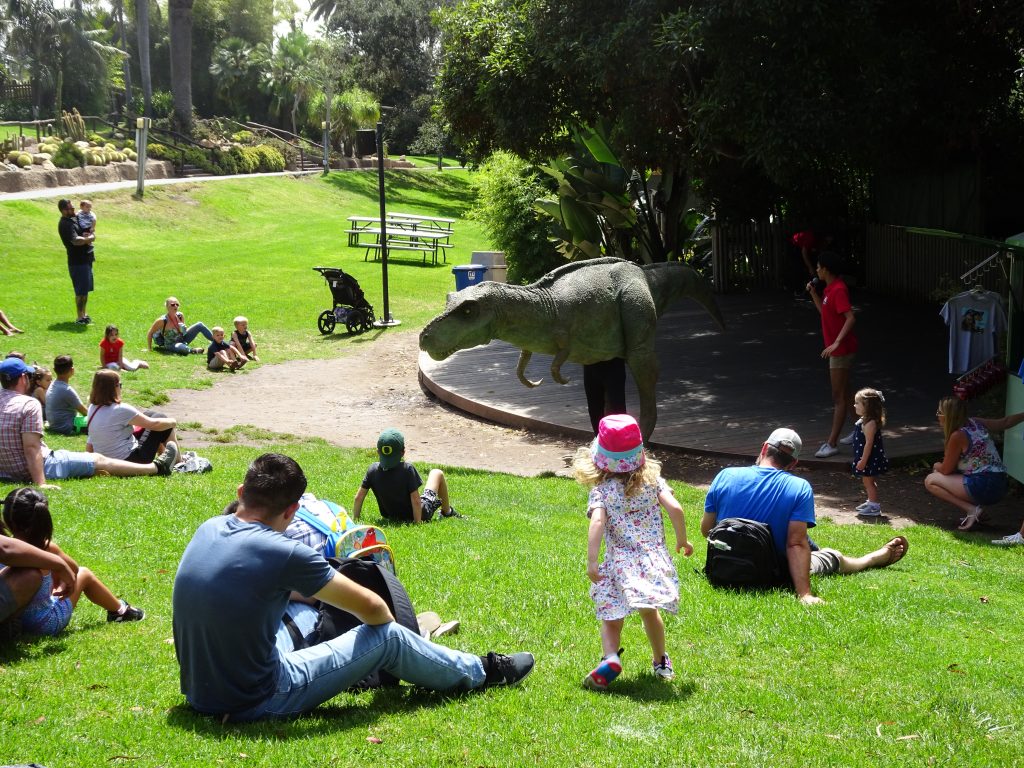 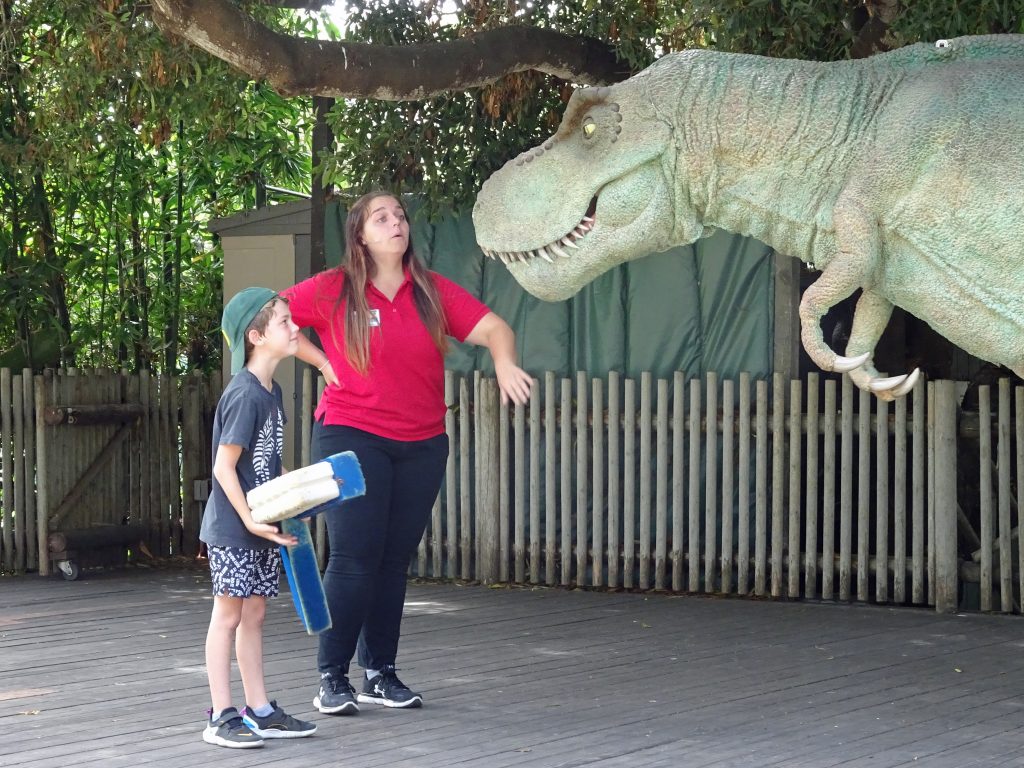 Leo was introduced and asked to get right to work, but first they needed to teach Leo a few hand-signals DJ knew. They showed Leo how to get DJ to lower his head: 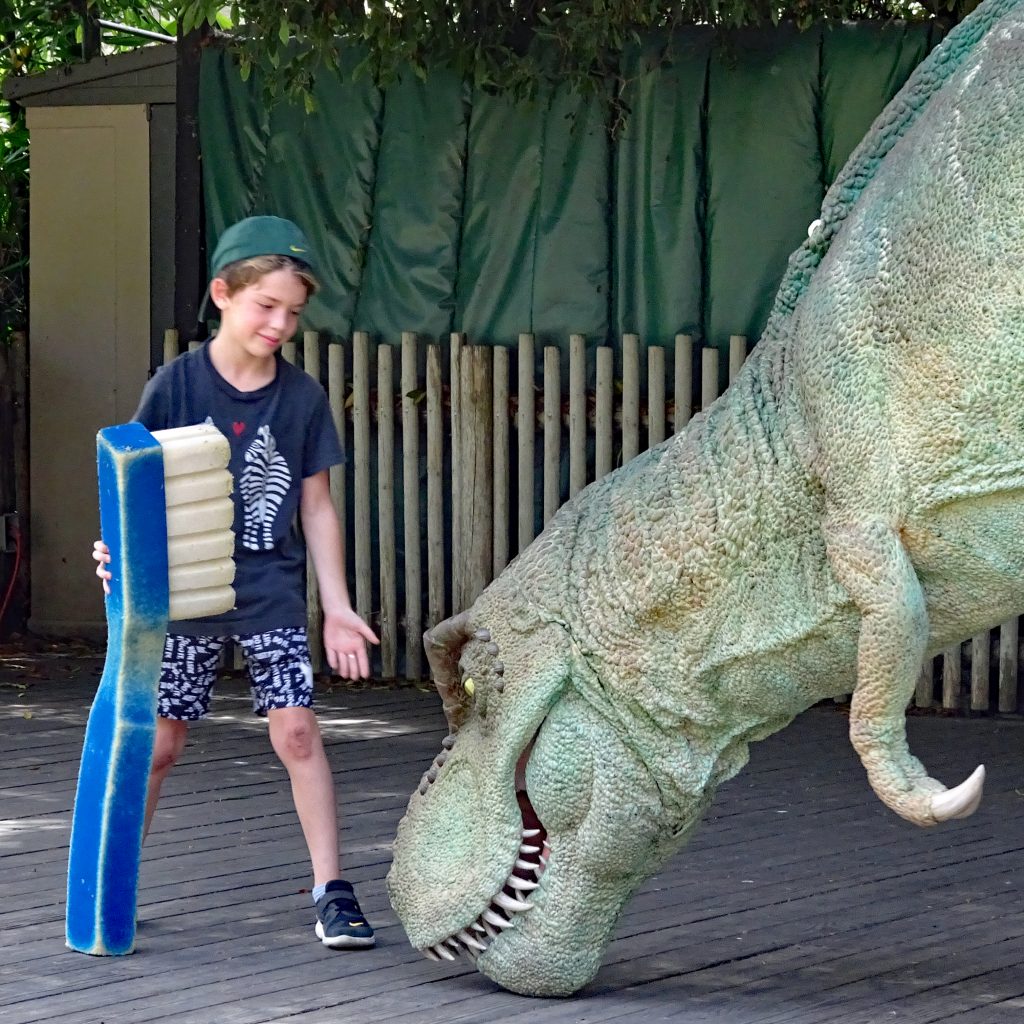 Meaning, the trainers were having fun with Leo and the audience! More photos of the dental session: 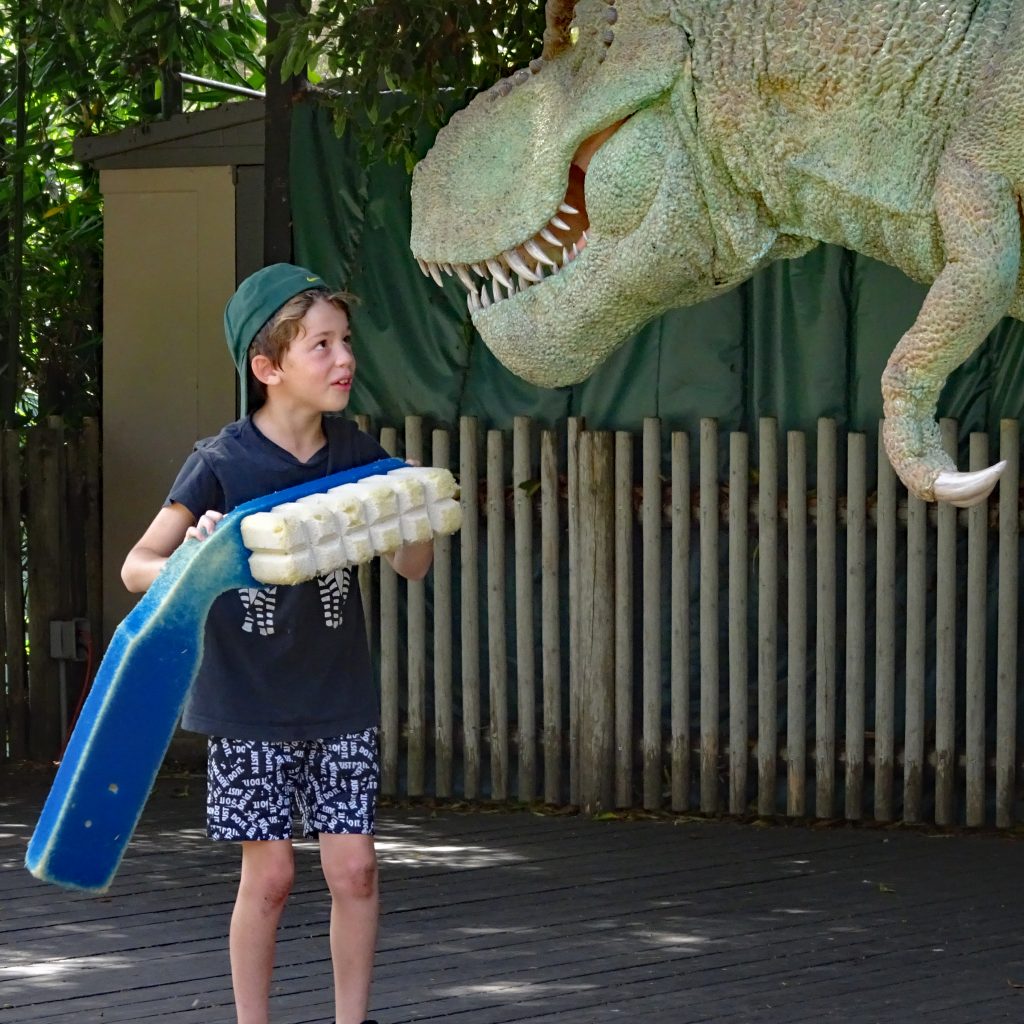 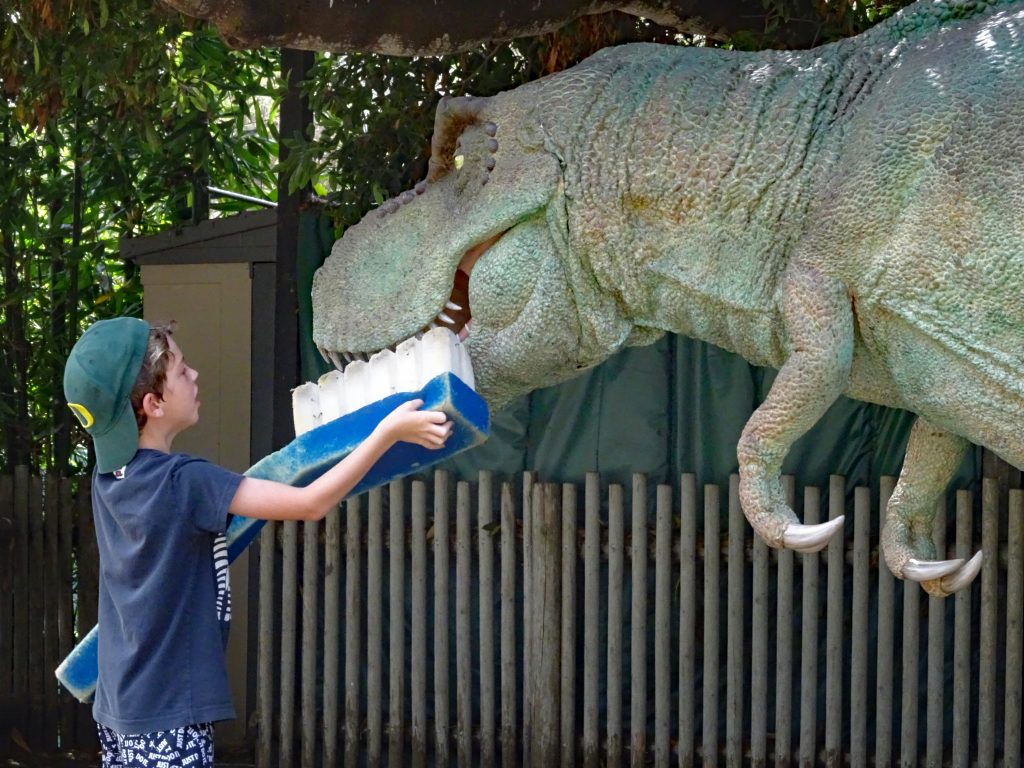 All the while, trainers were asking the kids on the lawn why the dinosaur had sharp teeth. Because he was a vegan? Omnivore? The kids just laughed. Kids are so smart these days – so many were yelling out: He’s a carnivore! 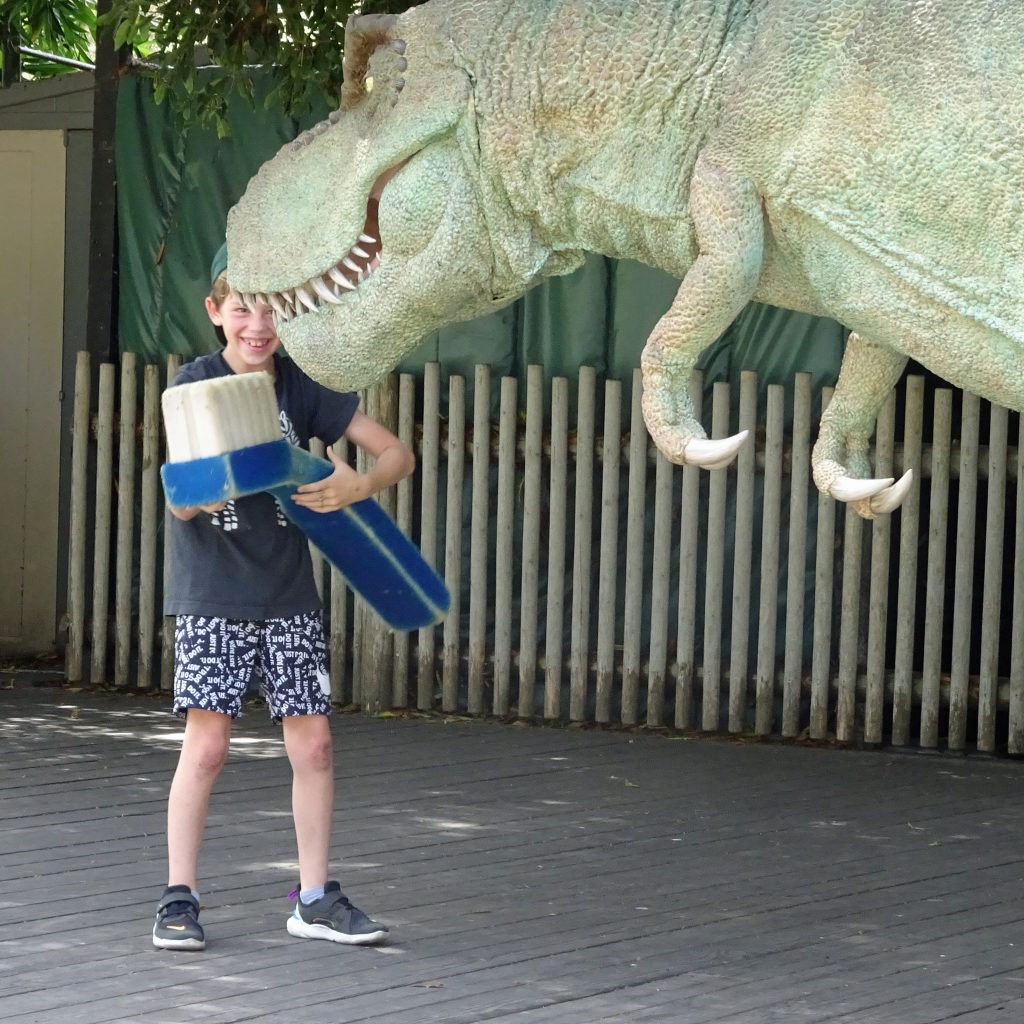 Raise your head. Open your mouth. Don’t eat the volunteer: 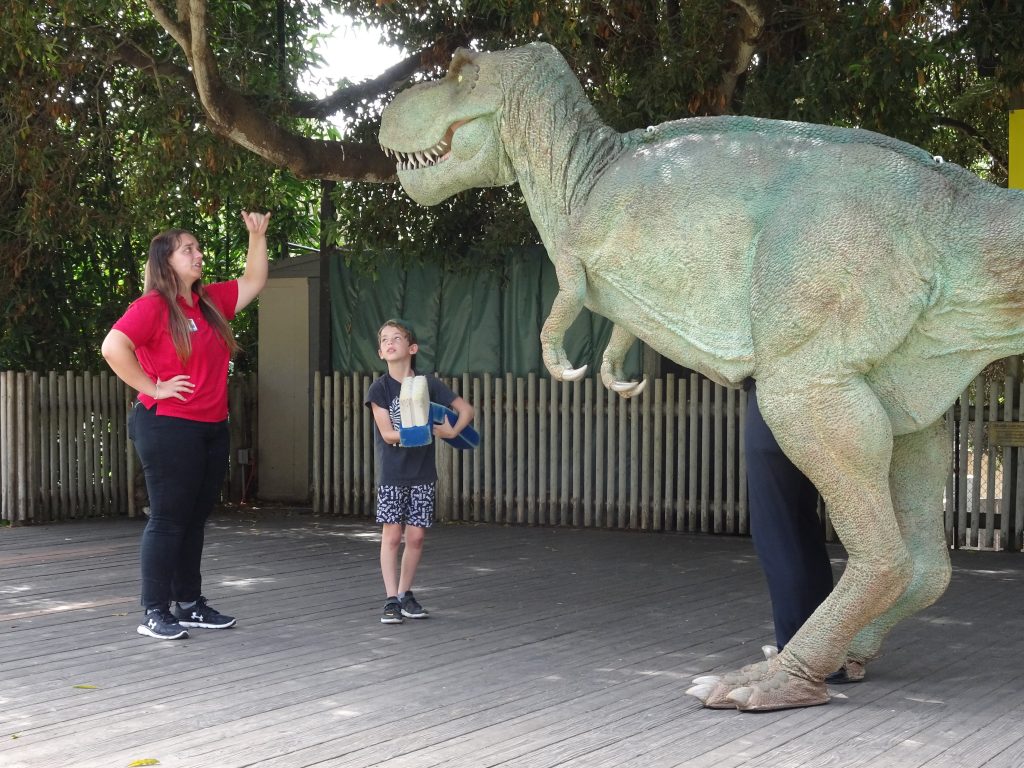 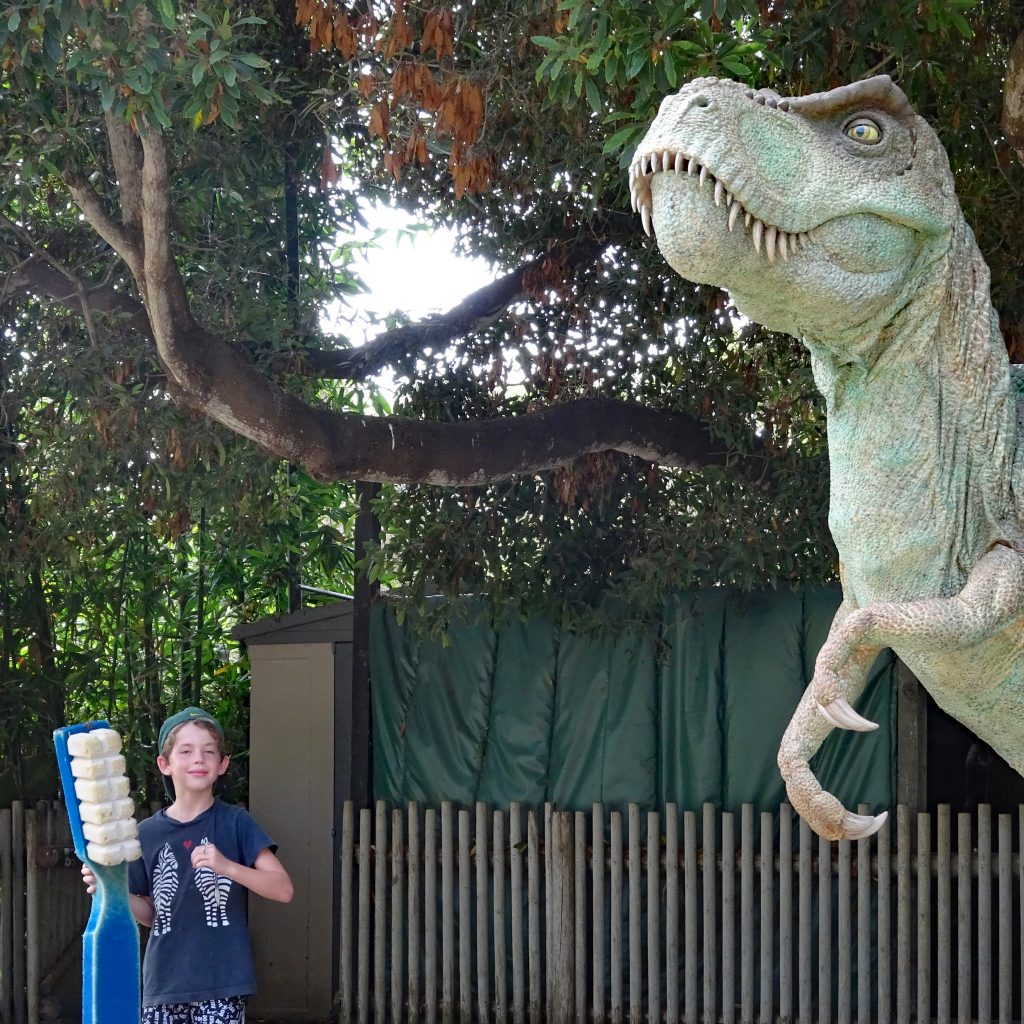 Job well done, Leo! After the cleaning, DJ let all the children come up on the stage to receive a kiss or a fist-bump. DJ kissed Lucy: 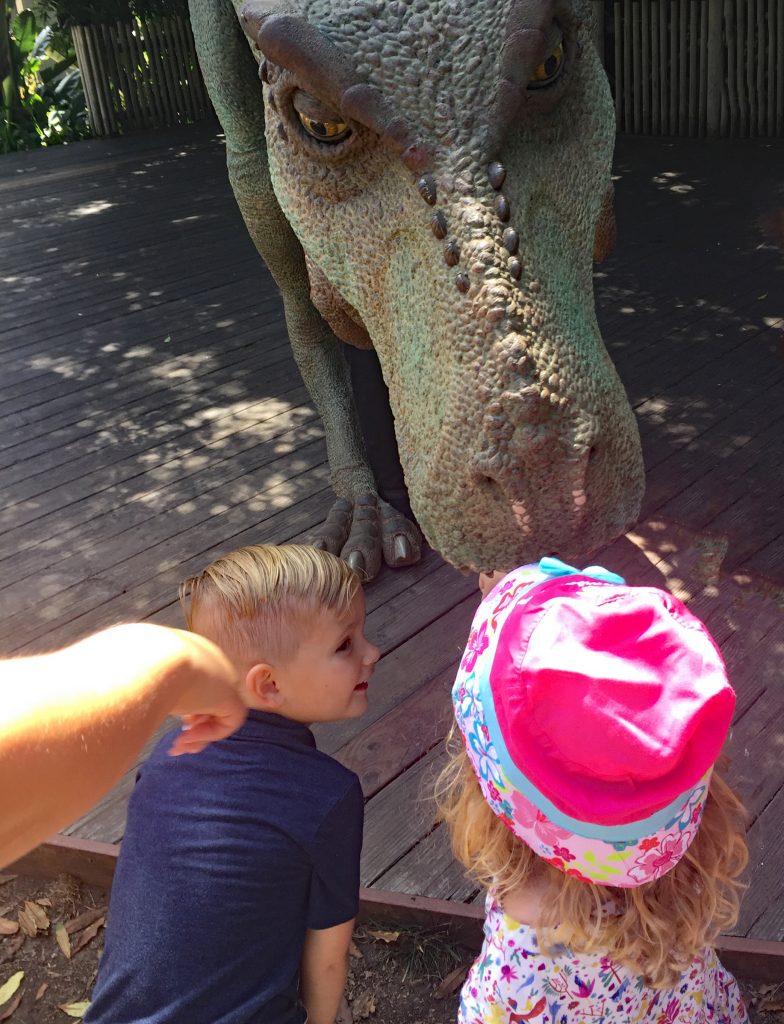 There were so many activities to entertain children at the Santa Barbara Zoo. Leo and Lucy spent quite a bit of time in a bouncy castle, and also slid-down a fake-grass hill on pieces of cardboard. Simple fun. 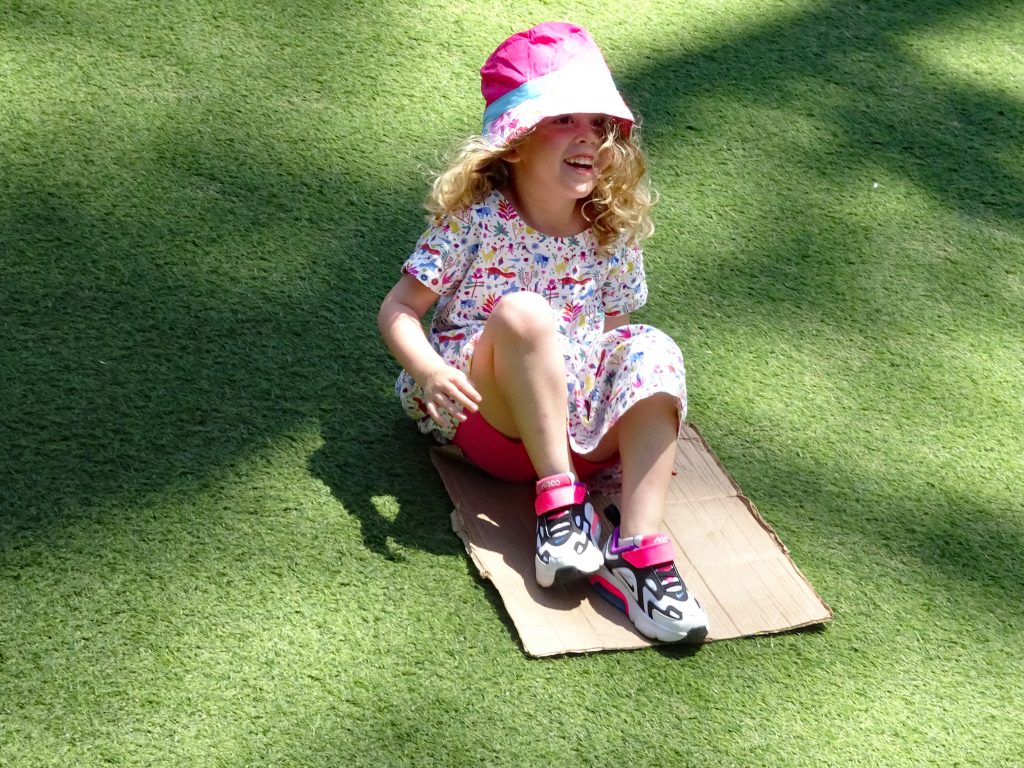 We toured every exhibit of the small (30-acre) zoo. The zoo is well-known for their giraffe’s and a popular attraction is giraffe feeding (which was not happening while we were at the zoo today). 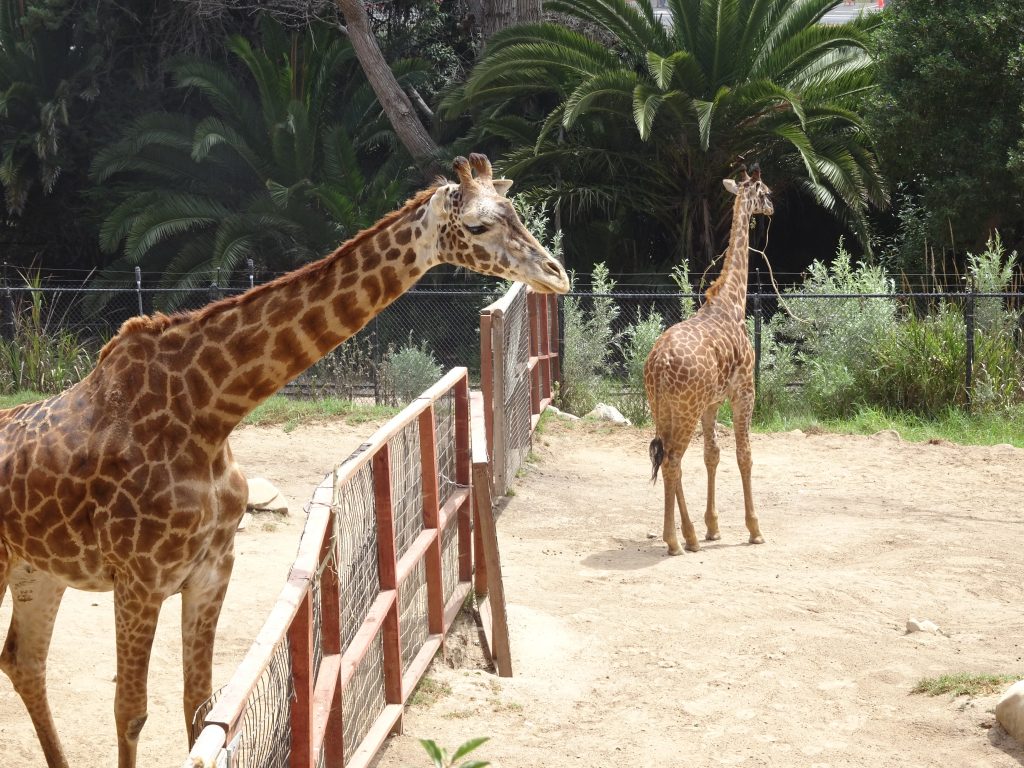 Another popular attraction is the train ride… where Leo’s Oregon Duck hat flew-off and had we had to wait around for the next train, as the conductor promised he would stop and fetch it for him on the next ride. And, he did! 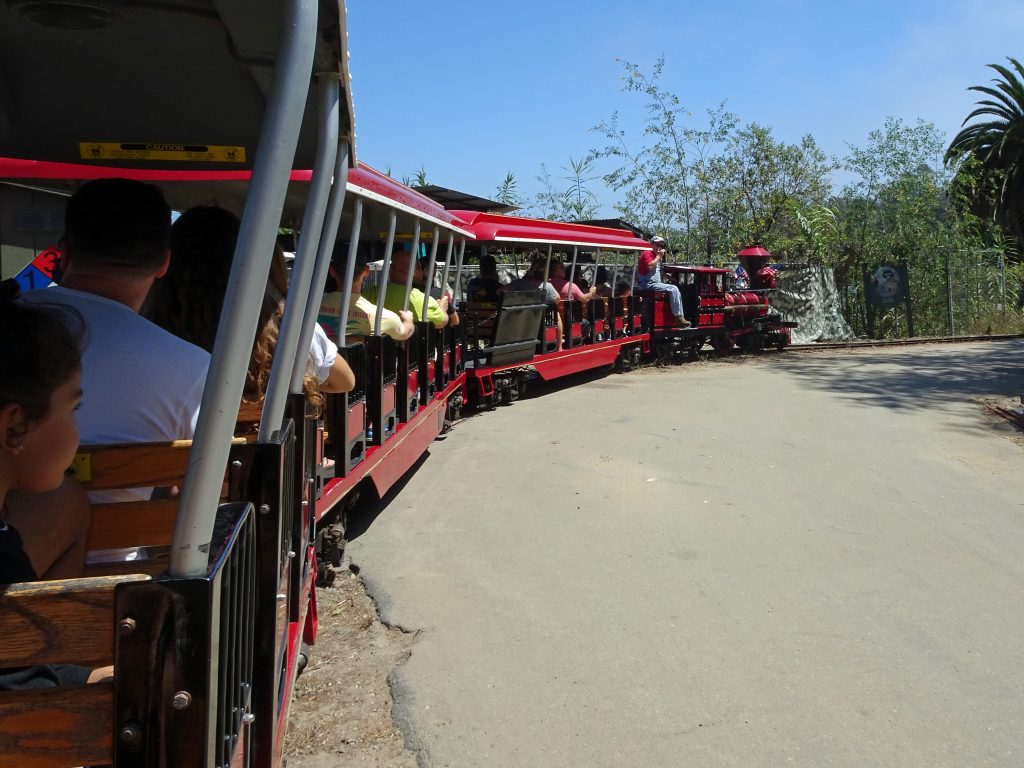 After returning to the hotel, the kids posed with their zoo souvenirs for their mom, who will not be excited to see more “stuff” enter their new house before they are even unpacked.

Then we went to the hotel pool for a few hours!

Our focus this evening was the Oregon v Auburn football game (live from Texas on ABC) which began at 4:30p pacific. The game was being shown on several televisions in the hotel (and, of course, in our room), so we settled into the indoor/outdoor patio restaurant along a huge lawn where the kids could play, and where the hotel was hosting a pop-up “Rosé All Day” Airstream situation with Malene vineyard: 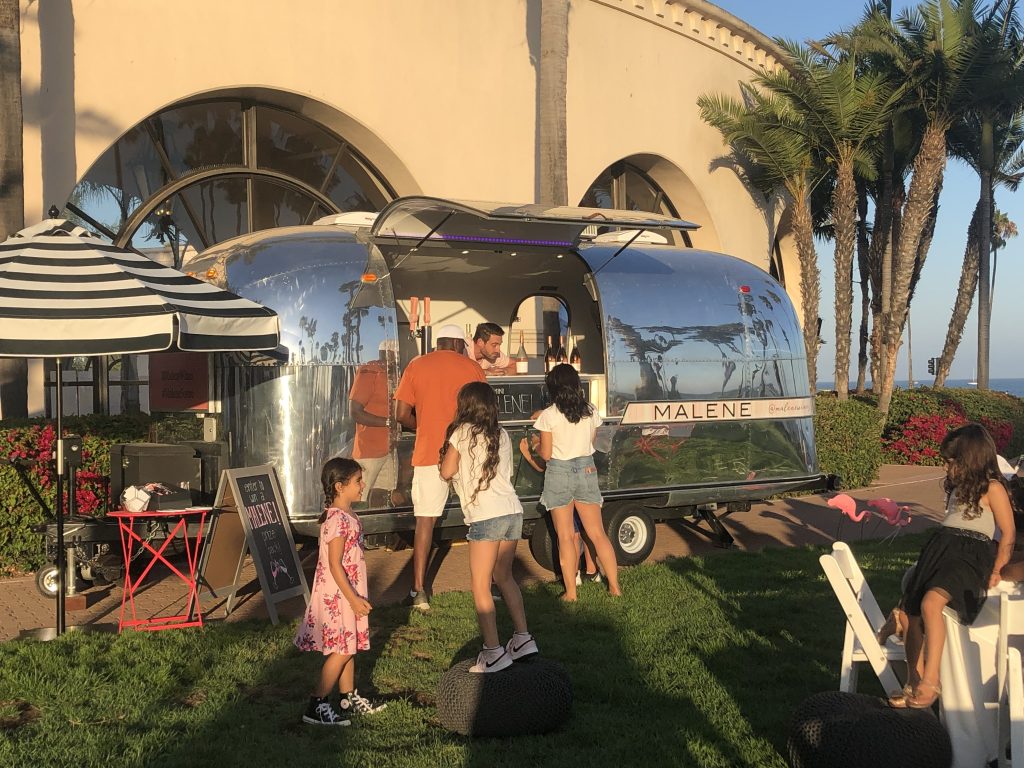 We had dinner and rosé (and ice cream sandwiches) while watching the Ducks lose to Auburn. DT and Leo are quite sad and in serious funks. 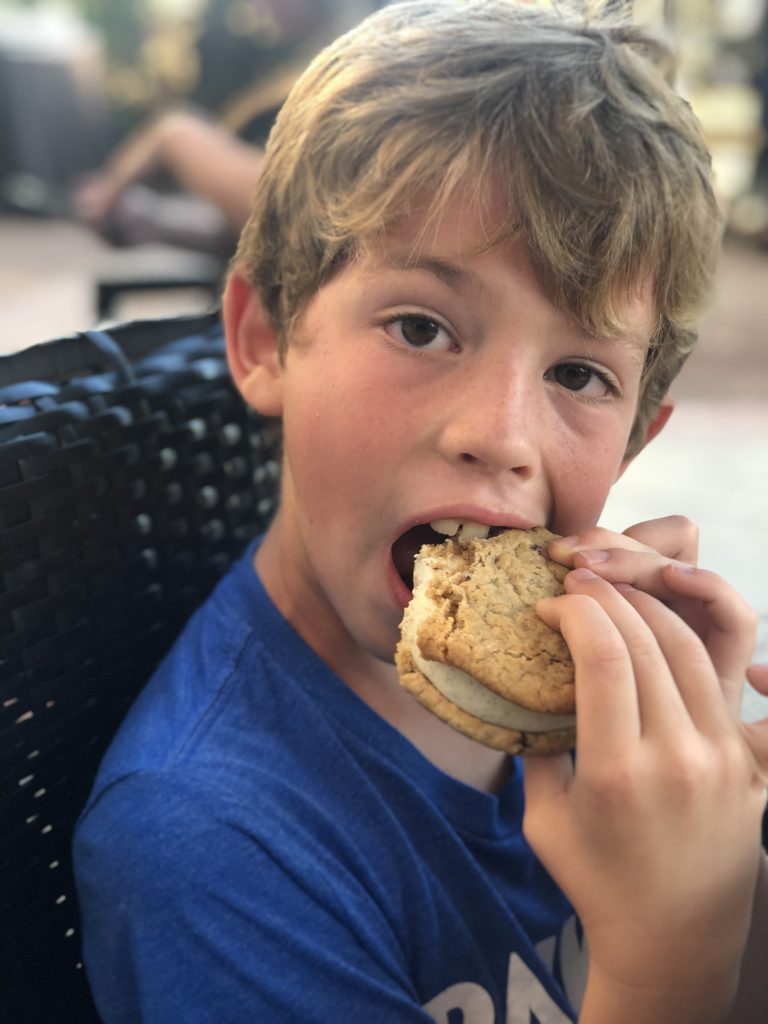 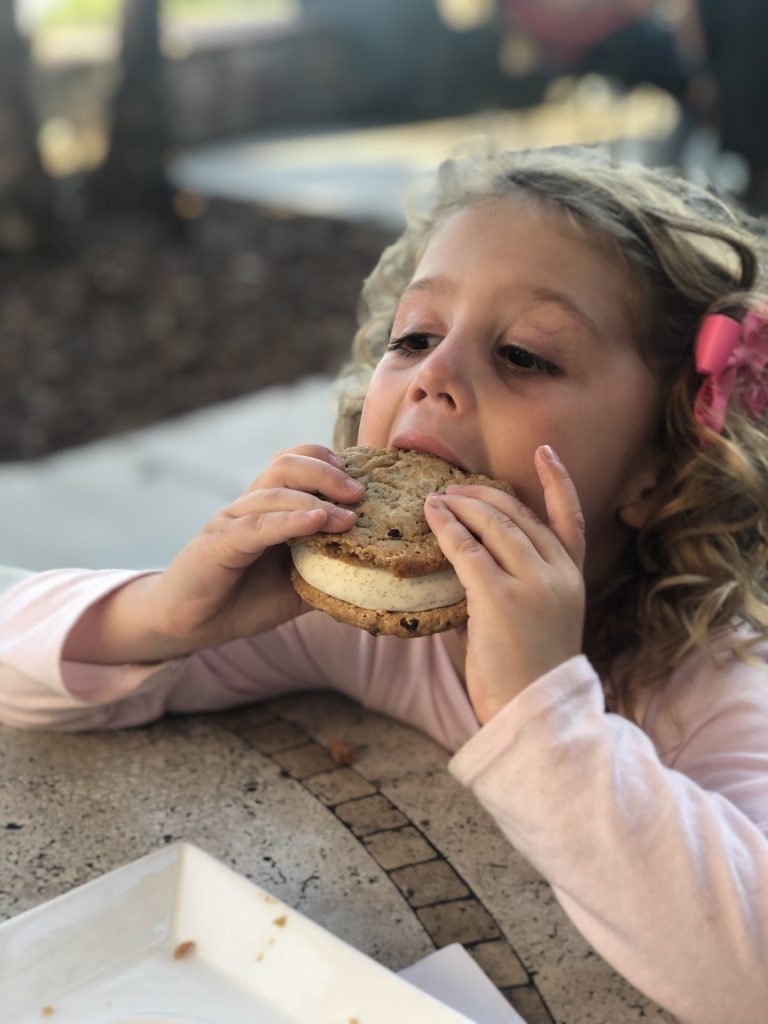 Except for the score of the football game, we had just a wonderful day in Santa Barbara. The weather was just awesome (the morning fog burned-off early), the kids had so much fun at the zoo, Leo was chosen to brush the teeth of a dinosaur, they bought souvenirs, they had ice cream, we swam, we had rosé. The kids fell asleep about two minutes after baths/showers tonight.