Eugene, Oregon: Hello from Track Town USA! We will be here for a few days, and then head over to the Oregon Coast. Hoping to find a little sunshine!

Before packing up and heading out, we spent the morning with Ryan and Lindsay. I bet you thought Ryan stopped by our house on the way to Canada for a free place to crash for the night.

Well, maybe you are right, but Ryan had another reason to stop in Portland. Ryan is a huge Nikephile. He collects Nike shoes. He studies the company. He knows the history. Ryan also knows DT is a retired Nike executive who could offer two things - a private tour of Nike World Headquarters and a visit to the exclusive Nike Employee Store. 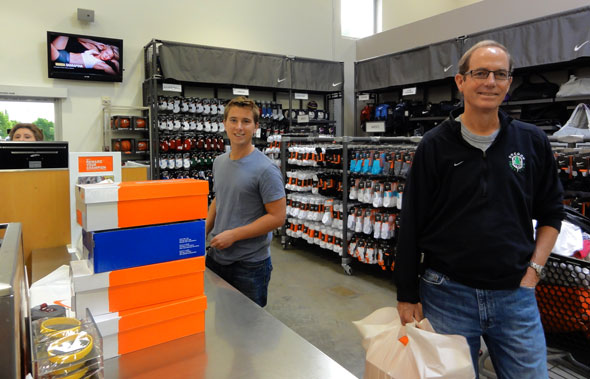 Ryan was like a kid in a candy store at the Nike Employee Store. Nike products, plus Nike-owned brands (Hurley, Converse, Cole-Haan) at employee pricing. Everything from Nike golf clubs to socks. Shoes to sunglasses. Ryan was amazed. He was delighted. He thanked us over and over. (Oops, I guess you can notice, DT bought a few things as well... and a few things for our future grandson.) 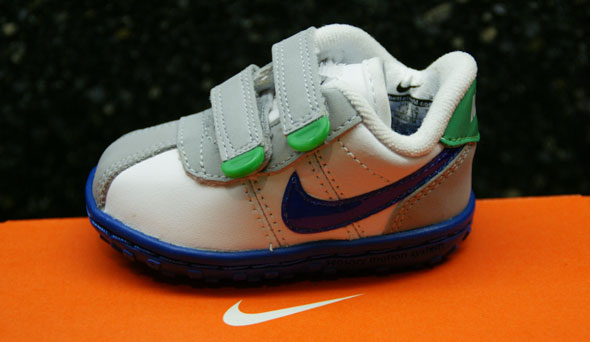 So cute! So teeny! 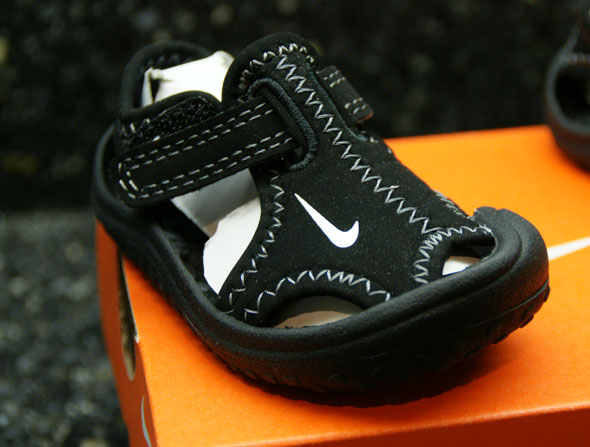 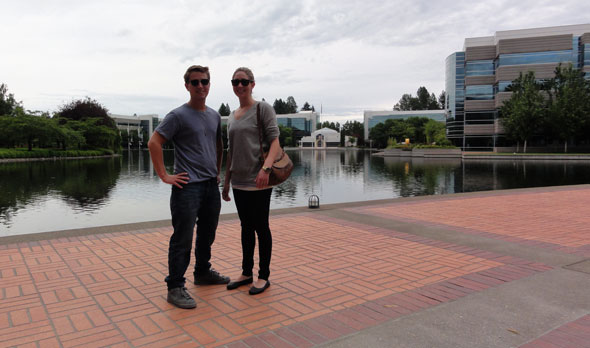 Our next stop was a tour of Nike World Headquarters, situated on 193 wooded acres in Beaverton, Oregon. It was a very warm day, humid, but it was not raining for once. Yeah! Office buildings are situated along the shore of a lake in the center of the campus and employees have two huge fitness centers, a swimming pool, basketball courts, tennis courts, soccer fields, sand volleyball courts, climbing walls, 3 daycare centers, many restaurants, a beauty salon, dry cleaner, Nike shops, sundry shops, a regulation track, about 4 miles of jogging trails and access to light rail. And there are probably a few things I have forgotten. 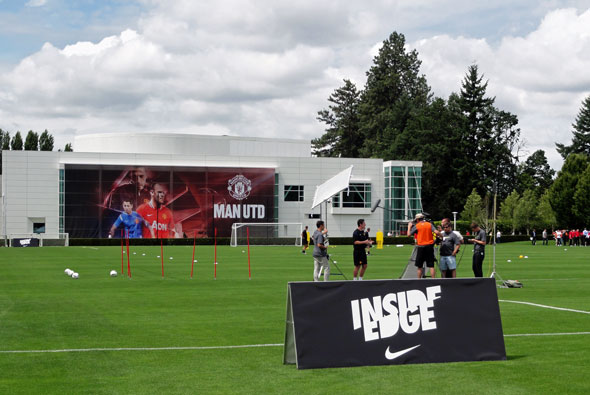 It was so busy at Nike World Headquarters today. Unbeknownst to us, Manchester United was holding a practice and a scrimmage on one of the soccer fields! 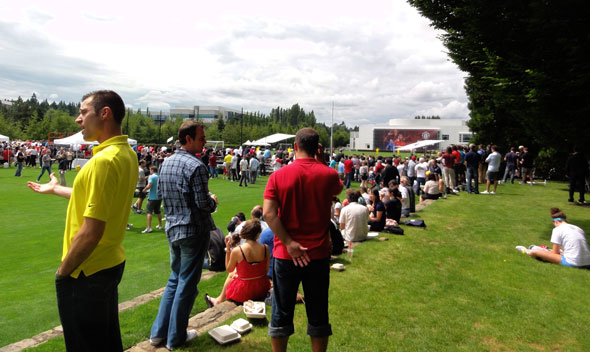 Bleachers had been set-up and a huge hamburger barbeque luncheon had diners lined-up for a block! (Manchester United will play the Sounders in Seattle Wednesday.) 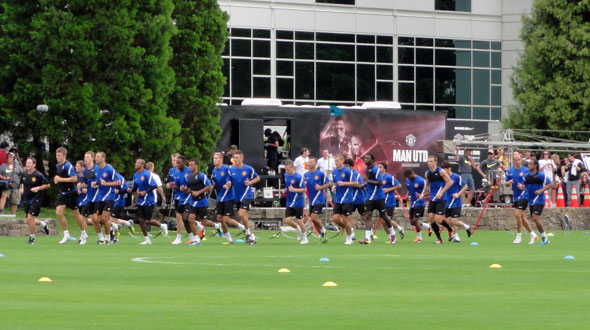 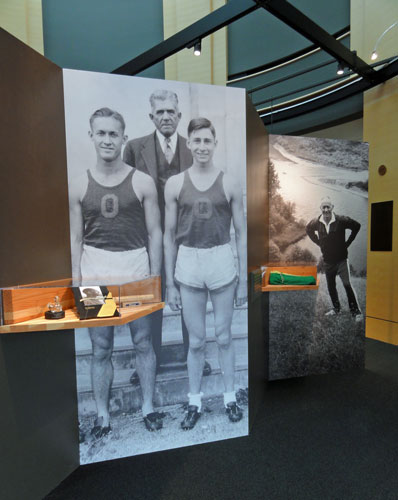 Bill Bowerman (front left) as a runner at Oregon

After walking the circuit around Nike World Headquarters and a quick lunch at the Boston Deli (one of the many restaurants on campus), we made a final stop to Prefontaine Hall - the Welcome Center/Visitor Center. The museum in Pre Hall is having a special exhibit honoring (what would have been) Bill Bowerman's 100th birthday. Bowerman was the long-time and legendary track coach at the University of Oregon, and together with Phil Knight, they started making running shoes for runners in the early 1970s... and, well, the rest is history - still in the making. 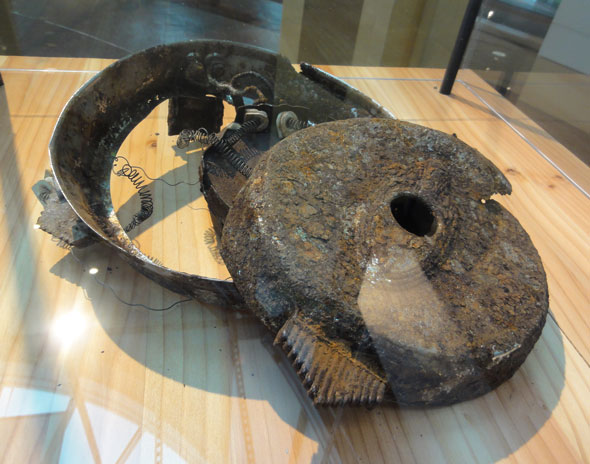 They even have the original rusty waffle iron! 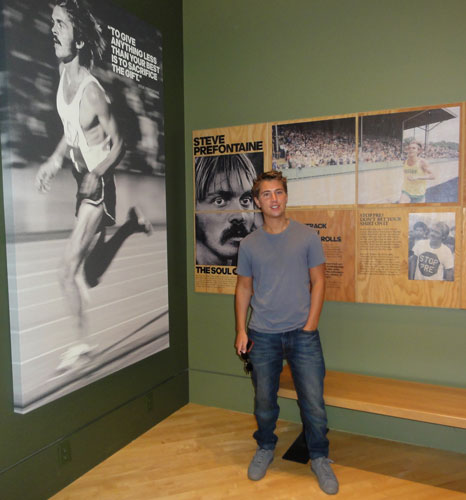 Ryan loved looking through the historical Nike exhibits and we even found a photo of DT on display! 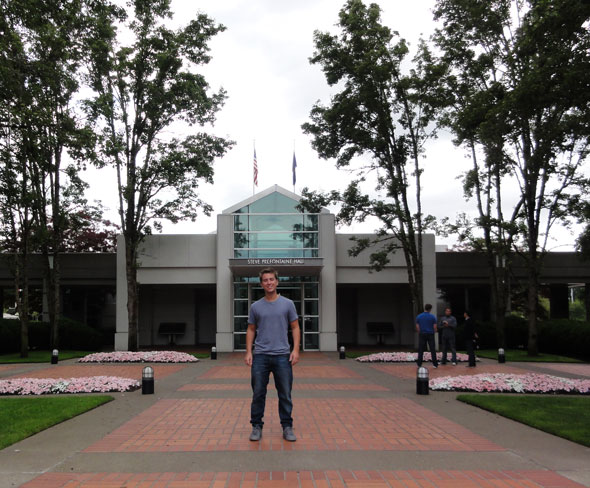 Ryan and Lindsay continued north on their West Coast Road Trip and we threw a few things in the Honda and rescued our motorhome from her storage garage. We made it to Eugene around 6p.

Until my next update, I remain, your swooshed correspondent.