Canyonville, Oregon: For the first time EVER, we have stayed two nights at theSeven Feathers RV Resort. Normally, we use this park as a convenient over-night stop, which really is a shame as the resort is simply one of the nicest in America. Today, we had a little time, so decided to explore a bit. After exercise and work, we drove the Honda 23 miles south on I-5 (yes, retracing our steps!) for lunch at the historic Wolf Creek Inn. We had lunch at the Wolf Creek Inn two years ago and wanted to go back for more of their delicious fried chicken. 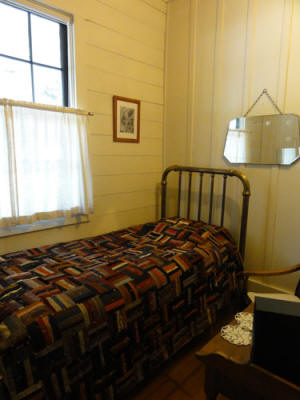 After lunch we took a self-guided tour of the upstairs rooms. The above photo is of the room often used by Clark Gable. He loved to fish in the nearby Rogue River. The hotel has also hosted Jack London, Carol Lombard, Mary Pickford and Douglas Fairbanks, Jr. President Hayes once dined at the Wolf Creek Inn. I bet he had their famous fried chicken!

The room on the right is a typical example of how most guests rooms would have looked when the inn first opened. Jack London wrote The End of the Story in this room in 1911.

There is also a pretty ballroom on the upper floor and a hall with four guest rooms, each with ensuite baths - for rent.

As you know, My Driver has a keen interest in geology which goes hand-in-hand with mining. DT has never mined, but knows what types of ores are apt to be found in different rocks, etc., and if you are a long-time reader, may have noticed we seem to visit a lot of old mines and old mining towns. 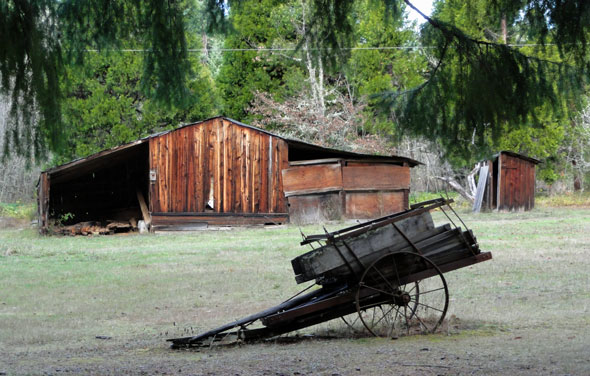 Golden, Oregon. Founded in 1890, Golden was the site of a huge placer gold mine. (Placer mining means water is forced at high velocity into the hillside and the resulting mud is routed through a series of sieves to find the gold as it is flushed out of the earth.) Today Golden is a ghost town, with only a few buildings, an outhouse and a few headstones still standing. 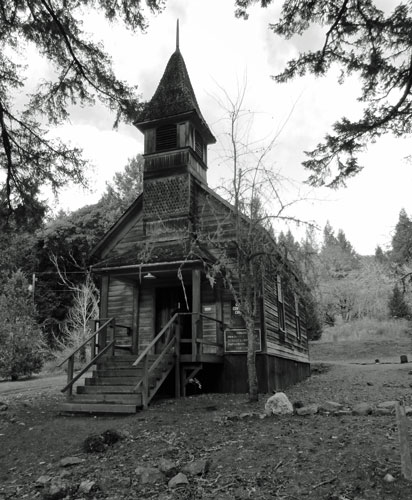 Golden was a very odd mining town: it had two churches and no saloons. This church is still used on Sundays! 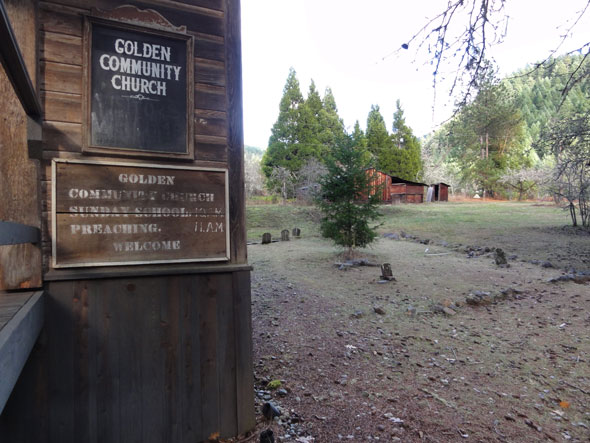 There are a few headstones in the cemetery, but the names can no longer be deciphered. 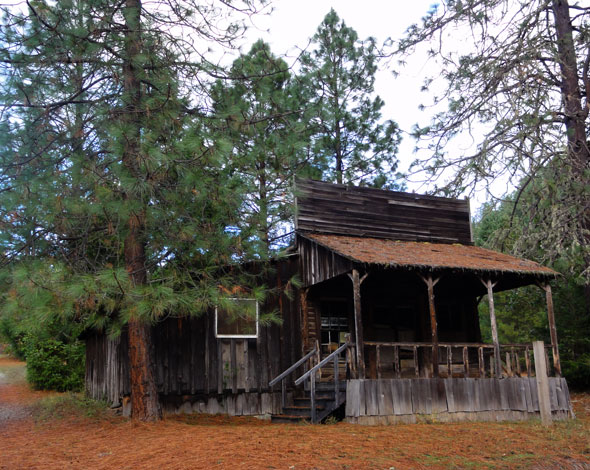 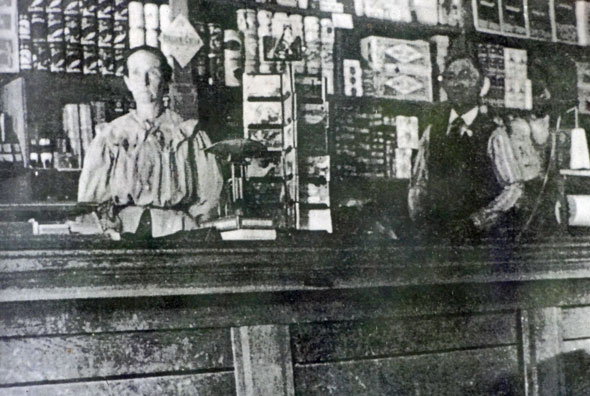 The above photo was taped to the window of the store. Is that canned salmon/fish above her head? Dang, that woman looks unhappy. She either needs some cod liver oil or maybe something offered in a saloon?

The mine was just a few feet from town. The big hole in the ground is now being restored as the Golden Coyote Wetlands, and the project is working as beavers have returned and are greatly helping to transform the habitat to a more natural state.

And that is the last time I will ever say anything positive about a Beaver. 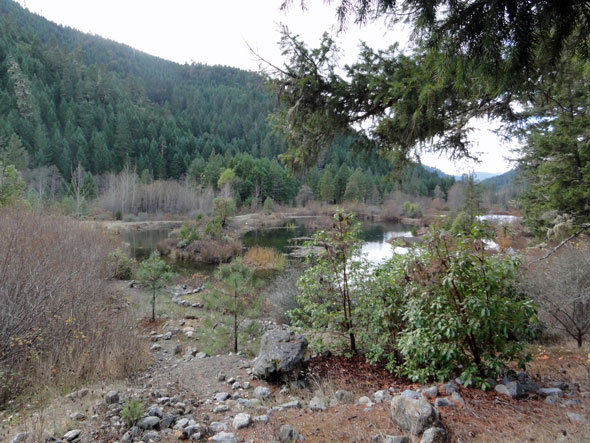 We traipsed a bit around the wetlands on the trails... as much as I can traipse around a wetland in boots with four inch heels.

We still had one more stop. Another place we had never visited that we have passed by countless times on our I-5 travels - Heaven on Earth Restaurant & Bakery at Exit 86. Dessert time! Wait a minute, you may ask, didn't you just eat fried chicken? 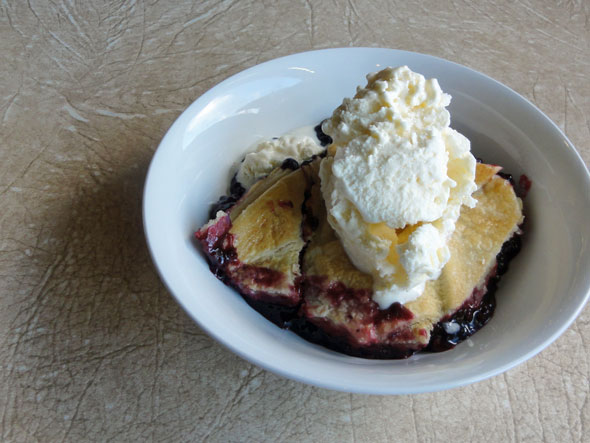 That was hours ago! DT had heard Heaven on Earth served great cinnamon rolls and desserts and they did! We also saw mounded plates of foods being delivered to tables in the restaurant. Breakfast is served all day! Dave had Marionberry Cobbler ala mode. 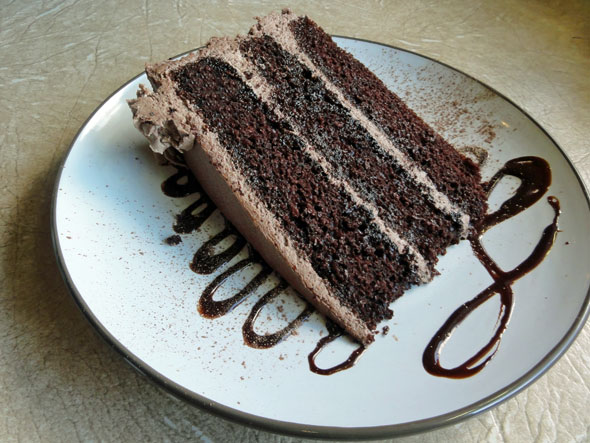 I ordered a piece of chocolate cake. This massive slice is on a dinner plate! It must have been 8-inches long! I was a trooper and ate over 1/3 of the moist piece of cake. OINK!

Not only did we really over-indulge today, we bought one cinnamon roll for breakfast tomorrow... after which I will need to run 3,596 miles (approximately). Anyone have a good hotel recommendation in the Atlantic City area?

No dinner required tonight - but it was a very fun day of exploring new places! If you ever find yourself along I-5 in Southern Oregon, try to visit one/all of the three spots.