Corning, California: I am fairly certain long-time Readers will not be surprised we are camped for the night in Corning. This is one of our usual stops on our way south. And, yes, it seem we just traversed this route and we did - on the 11th of this month... but in our car.

We arrived (via our Honda CRV) in Eugene, Oregon yesterday afternoon, where we had left our RV after the Oregon v USC game Saturday. After unpacking a few items, we spent 45 minutes cleaning the motorhome from top to bottom, then relaxed for the rest of the evening. I roasted the last butternut squash from Brother Steve & Gina's organic garden. Dang, if it wasn't just delicious. I tossed the cubed squash in olive oil, salt, pepper and nutmeg. So yummy. It was like candy! 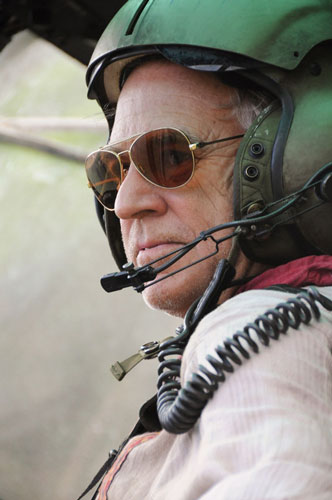 I spent the rest of the evening needlepointing and stayed up late to watch Hawaii 5-0 because a certain singer I enjoy had a guest spot on the show. I have never watched Hawaii Five-0 (the new version, I mean) before. Not sure I will watch it again. It does feature several actors I am familiar with from Lost and the ever-impressive Scott Caan of Entourage fame. But if you think for one minute that I could believe the law enforcement team of Hawaii Five-0 flew a helicopter into North Korea to rescue one of their own? Come on. Seriously? North Korea? Even if Frank Bama (aka Jimmy Buffett) was the pilot, this could be one of the most ridiculous plots ever written.

By the way, Jimmy Buffett was awesome and didn't have to stretch his acting "ability" too far as he actually holds a helicopter pilot license in real-life. The other-wise ridiculous writers did slip-in one margarita joke and Jimmy wore a temporary tattoo!

It poured buckets of rain all night and we woke to a huge rain storm. It was even too stormy for My Driver to go for a jog, so you know I deferred to his expertise. We headed south just after 9 o'clock and only stopped twice all day. We had head winds all day and we are not expecting much mileage-wise out of this tank of diesel. At least the mountain passes were clear of snow and our drive was mercifully without incident... except for the countless Duck, Beaver & (yes, even) Trojan fans giving us a friendly wave. 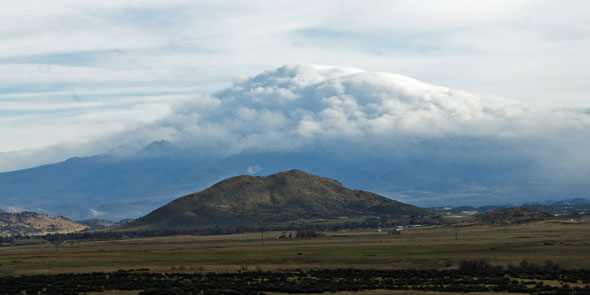 Just after entering California, we stopped at a vista point to enjoy this very interesting view of Mt. Shasta completely encased on fluffy clouds! I had never seen the mountain in this way.

My Driver, who holds a degree in Geology from the University of Oregon, said it was an opportunity to notice the hundreds of cinder cones around the base of the mountain. He was right! They were everywhere. 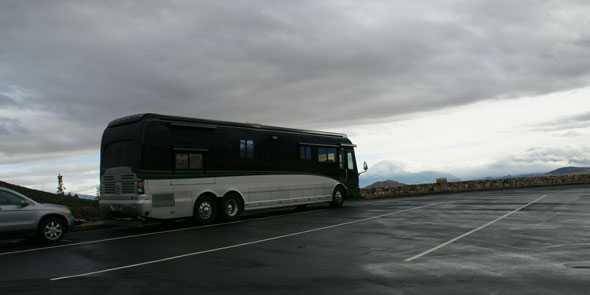 And here is just a lovely photo of the beautiful Magna Peregrinus at the Mt. Shasta Vista Point. 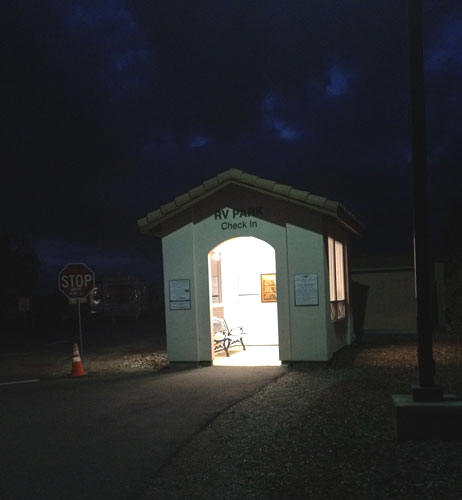 It was dark as we set up camp at exit 629 - the self-check-in RV Park behind the Rolling Hills Casino in Corning, California. Still $25. 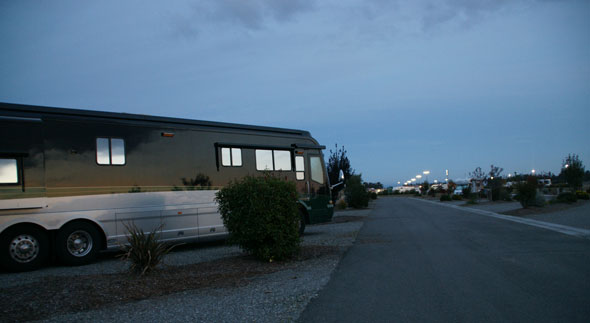 Pay at the kiosk, receive a parking "permit" and the spot is yours until noon the next day.

The skies were clear towards the east... 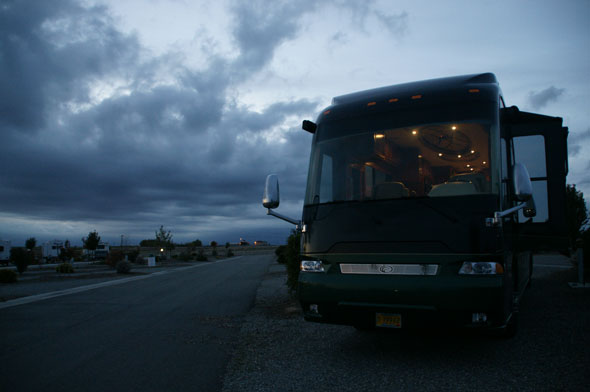 ... but it was pretty nasty looking west. Rain, rain, go away.

I put the lasagna I had made/froze the other night in the oven and before we knew it - dinner was served. A fat-free spinach experiment this time. 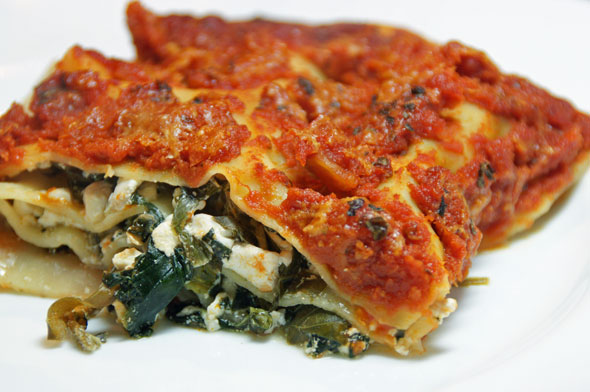 How was the lasagna? Considering I swapped fat-free cottage cheese for ricotta cheese, it was pretty dang good. I will make it again, but will add a bunch of chopped artichoke hearts to the mixture to make it a bit "taller".