In my last update, I wrote about preparing for a busy weekend of football - with one of Dave's college roommates flying-in for the game with his family - and preparing to leave on a little road trip. Tonight I will report that everything went very well, except for the final score of the game. The Ducks lost! To the silly USC Trojans. By three points and it was actually freezing at the game. Oh, goodness, it was a very long day... but first, let's start at Friday night.

We fetched Bruce, his wife Lisa, and their 9 year old daughter, Sierra, from the airport and met another one of their roommates, Terry (and his wife, Rosie) downtown for dinner. It was great to get the old gang back together! We had a little snow downtown on Friday evening. 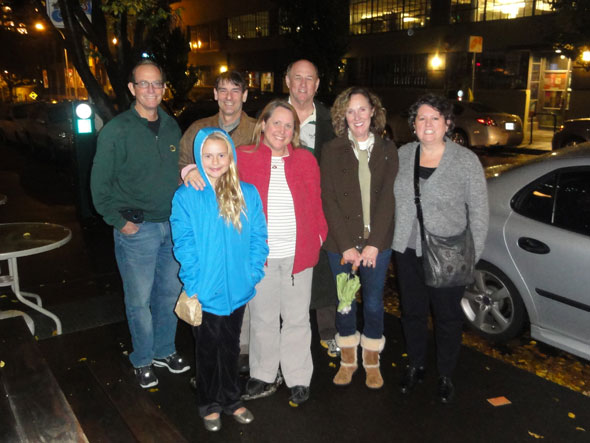 Saturday morning we enjoyed coffee and bagels before heading to Eugene for the game. Dave, Bruce and Sierra drove down in the motorhome. Lisa and I drove down in the Tahoe. (There is a reason for this confusing transportation scenario, which will be apparent later.) 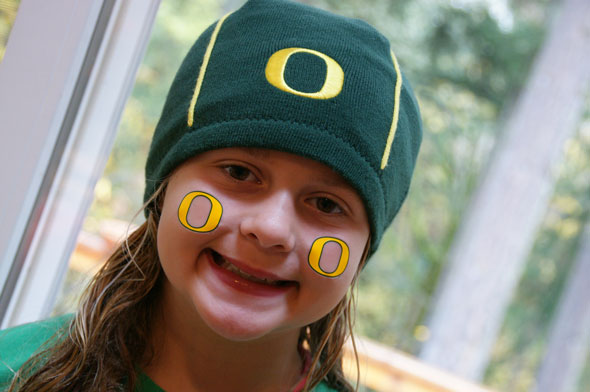 Sierra had her game face on! She loves the Ducks. 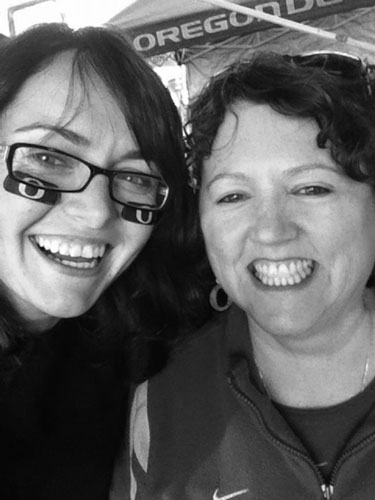 We had another big tailgate party, feeding the masses. Woody made a vat of beef chili and he served it in a paper cup over a bed of Fritos. The chili was then topped with chopped tomatoes, onion, grated cheese and sour cream. Delicious and really a great way to keep warm on the frigid day. 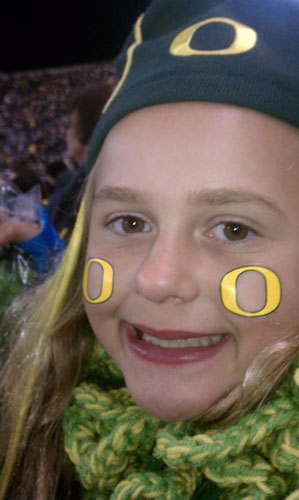 Sierra kept up a brave face in the ice box known Saturday night as Autzen Stadium. It was a terrible loss. The Ducks went from #4 in the nation to #10. Ouch. 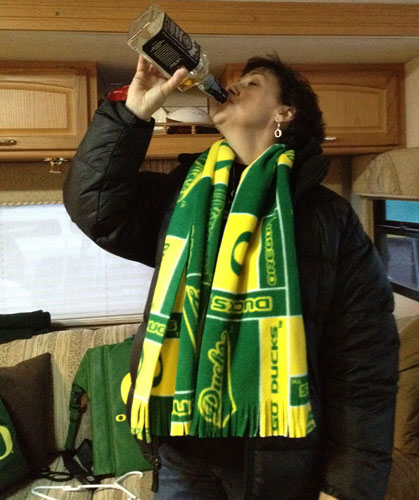 Note: this photo is staged. The RV Goddess does not condone drinking
Jack Daniels straight out of the bottle. (She thinks it should be mixed with
ginger ale and served over ice in a pretty crystal glass.)

After the crowd thinned out, we left Autzen Stadium and drove the RV to a campground (where we had checked-in and left the Tahoe earlier) and reversed vehicles. The motorhome was left in Eugene, and we all drove to Portland in the Tahoe. We arrived home very late, we were all cold and no one was exactly in a very good mood.

So, we decided today should be spent on more child-friendly activities. Even though it was bitterly cold, the sun was shining and it really was a very pretty day. 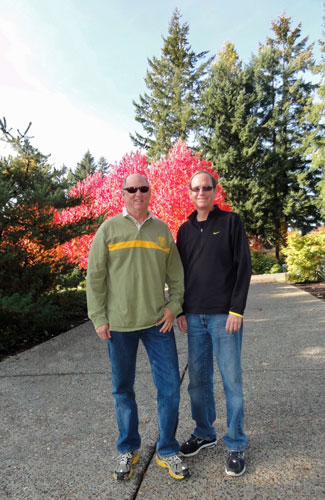 Bruce & DT in our driveway

The first stop on our kid-friendly afternoon was Piccolo Mondo (Small World) Toy Store. This shop is new to our neck of the woods and it is just top-notch. Sierra found a new little doll she really needed. 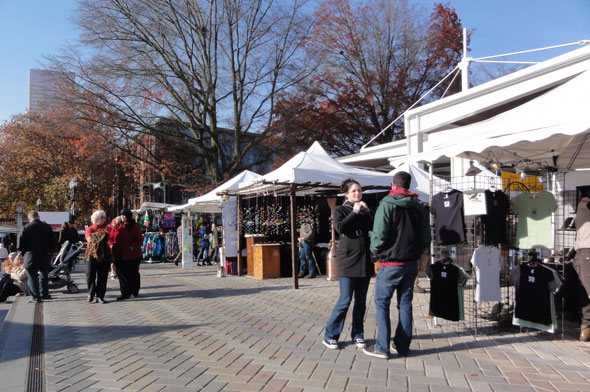 Next, we decided to drive to downtown Portland and have a stroll through the always entertaining Saturday Market. Sierra really enjoyed seeing all the crafts made by local vendors... but this time it was DT and I stimulating the economy: 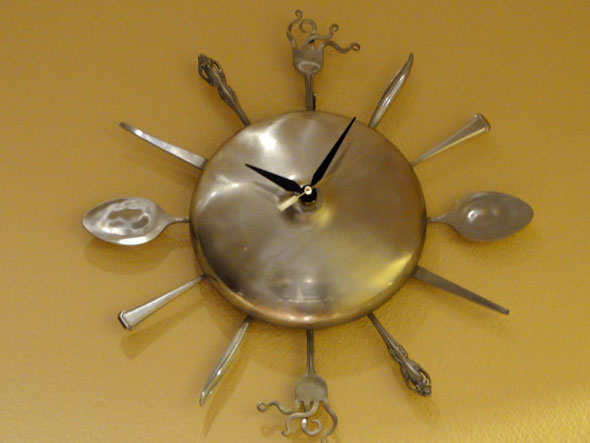 We bought this crazy knife/fork/spoon clock for our kitchen! The face of the clock is the lid to a saucepan. Our new whimsical clock was made by The Spoonman - a Salem, Oregon company that takes old utensils and everyday kitchen items and transforms them into clocks, jewelry and hair accessories. (It may be a little early to be thinking about your next gruesome Halloween costume, but wait 'til you see what else The Spoonman makes.)

We were hungry and we were cold, so we walked a few blocks to Dan & Louis Oyster Bar, because Sierra loves clam chowder and they serve some of the best at Dan & Louis. 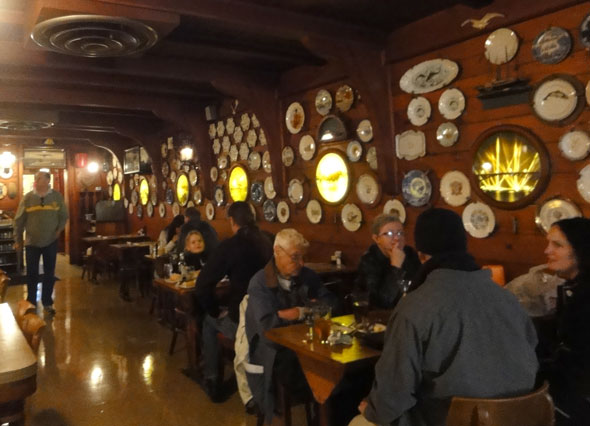 Dan & Louis Oyster Bar has been in the same location and owned by the same family since 1907! 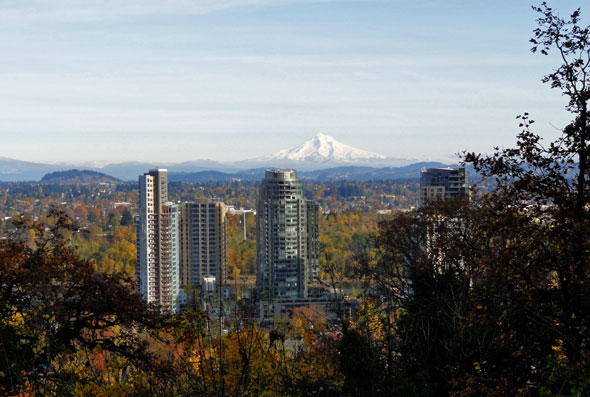 We stopped at a vista point above Portland for an awesome view of snowy Mt. Hood. 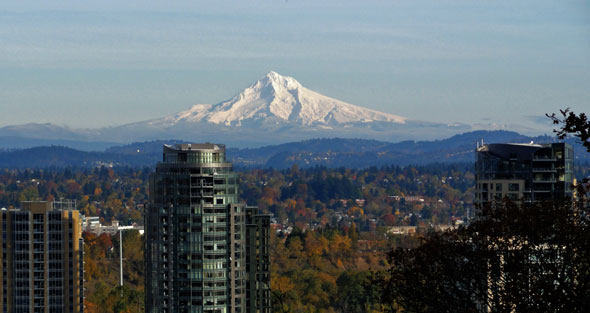 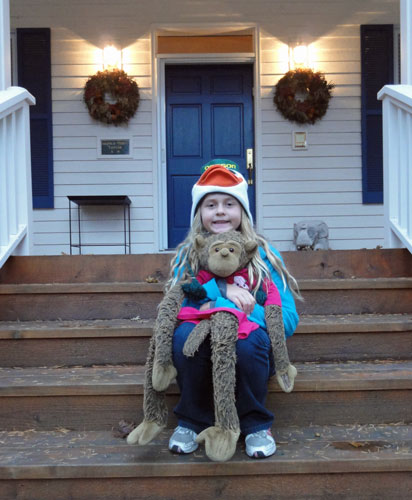 Sierra & her friend, MoMo, on our porch

We went home long enough for Bruce, Lisa and Sierra to organize their suitcases and then we put the cherry on the sundae of our Sierra-friendly day - we took her to Big Al's!! 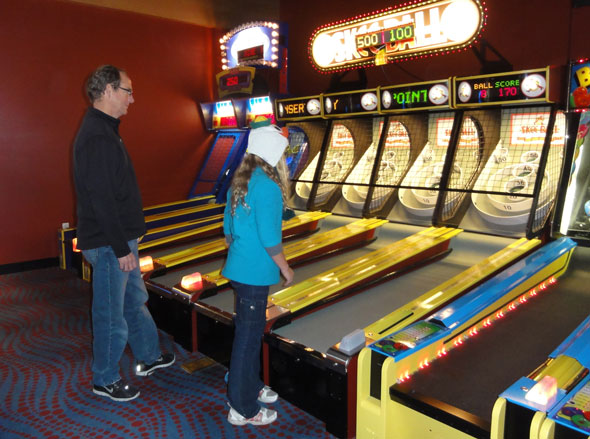 She had a blast going from game to game - racking-up hundred and hundreds of points. Points = prizes! After an hour, Sierra had enough points to "buy" an entire bag of loot and candy. 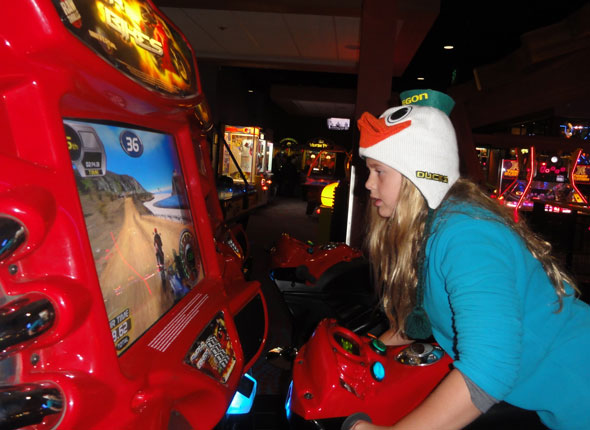 Sierra loved this motorcycle racing simulator. But... if Sierra ever asks to borrow your motorcycle, I would kindly advise you say no. At times she was driving over 150 miles per hour and I'm pretty-sure a few of her virtual motorcycle racing competitors are in a virtual ditch. Is that the cutest hat? And look at her concentration!

We filled her belly with nutritious chicken fingers and drove the family to the airport. A very busy weekend.

Tomorrow we are heading out on a trip in our motorhome!

Until my next update, I remain, your GO DUCKS correspondent.
« Nuts Road Warriors »