Indio, California: Instead of staying in Los Angeles for the Duck v UCLA game Saturday night, we drove back to Indio Friday morning. 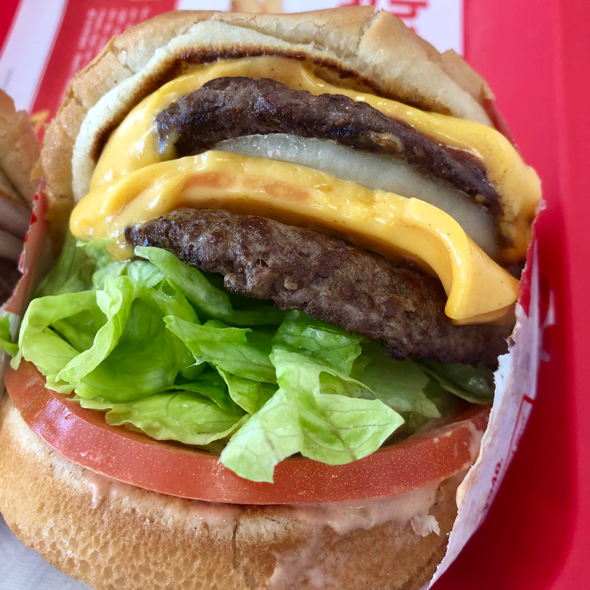 On the way home, we stopped for our annual visit to In-N-Out. It’s a California thing.

If you may recall, Lisa needed two days of peace and quiet (and no kids) to prepare for the charity auction next weekend for Leo’s school. As she did last year, Lisa “kicked-out” her husband and children and sent them to us. They arrived Friday night in time for dinner (and S’mores) and a movie.

This morning the kids were up early and excited to finally find some sunshine! It was only 65 degrees today, but there wasn’t a cloud in the sky and not a hint of wind – such a joy after the past two months of rain and cold! After breakfast, Lucy made tickets for attendees for her BIKE SHOW. 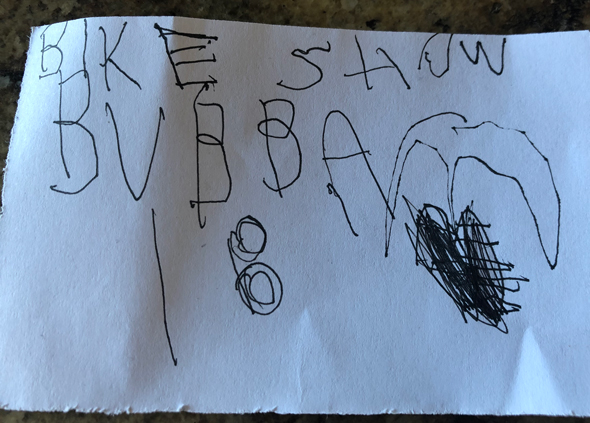 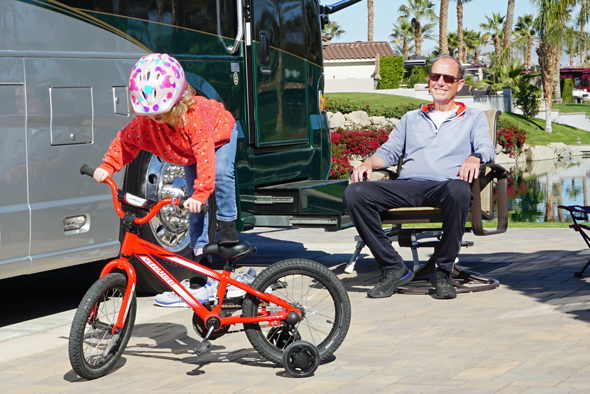 For a four-year-old who had never touched a bicycle until a few weeks ago, Lucy is about ready to pitch the training wheels. Obviously, she has mastered several fancy tricks. Lucy is turning into a dare-devil (like her brother). It was a great show. Not to be shown-up, Leo did a few tricks on the street for us to admire. 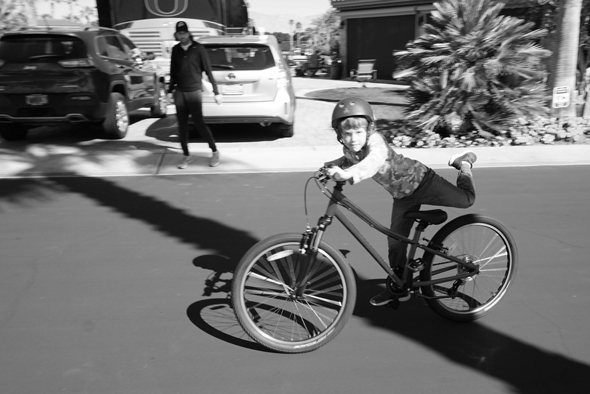 Our planned activity for the entire day was a visit to the Riverside County Fair and National Date Festival. We saw most of the fair today, but never made it to the Date Festival part. The entrance fee was not steep, but everyone (but me) bought $28 unlimited midway ride wristbands. This did turn-out to be a bargain for everyone but Lucy. She was too tiny to ride much of anything except the “baby” rides… but she had as much fun as anyone and Leo was a total trooper and didn’t mind riding the kiddy rides with Lucy (as he much prefers the wilder rides). Even Leo wasn’t tall enough to ride a few of the monster-thrill rides at the fair. 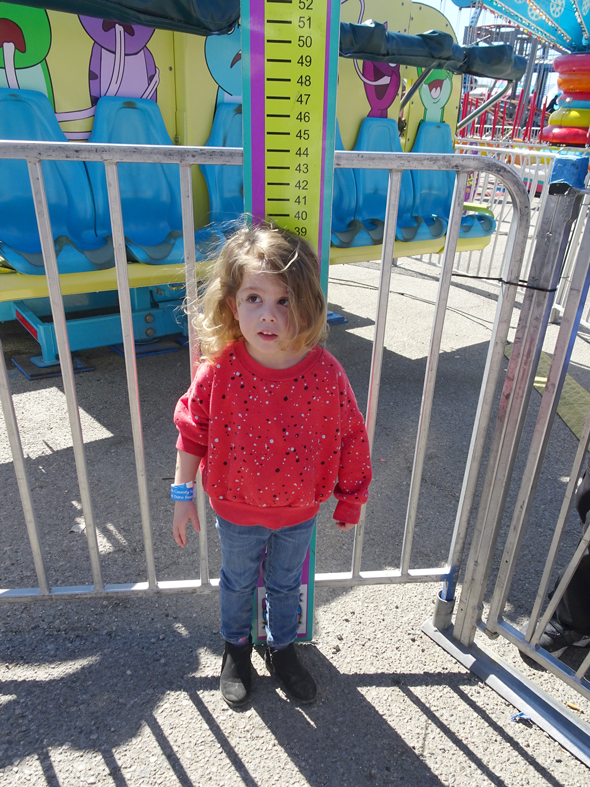 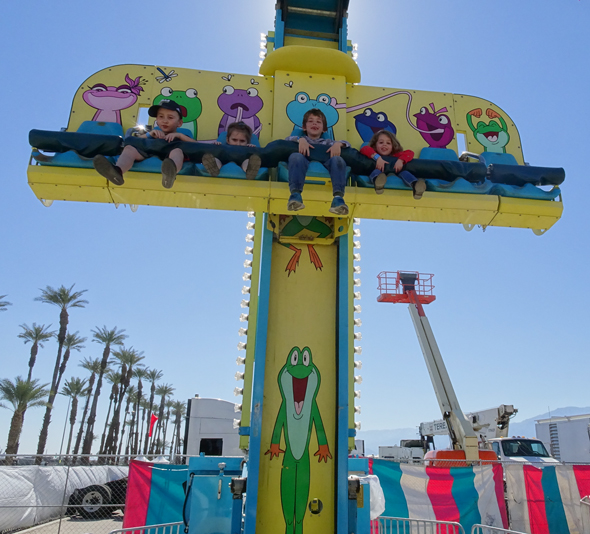 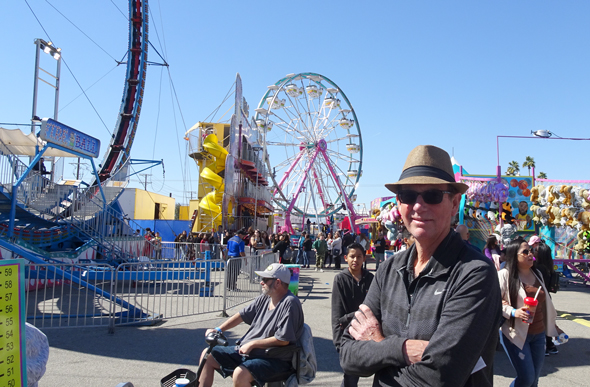 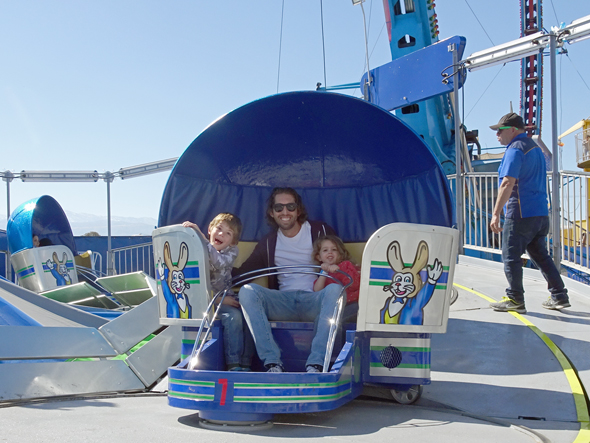 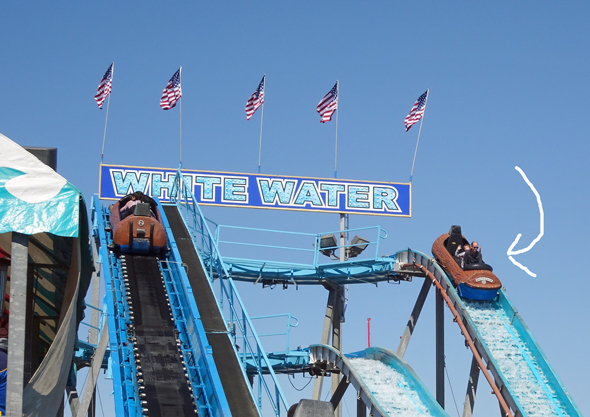 Dave and Leo on the White Water log ride (Dave was soaked!) 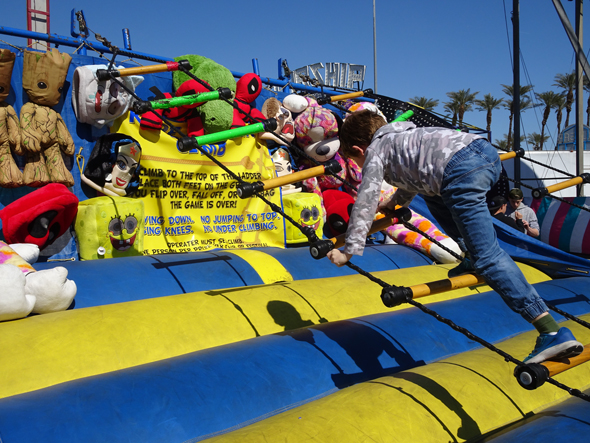 We spent another fortune on arcade games and tests of strength/courage. Leo made it over half-way up this rope climb. Balloons were popped. Rings were tossed. Balls were thrown. Leo came home with a big stuffed black dog. Lucy won a rubber ball and a pink stuffed carrot. (Not a typo – it is a pink stuffed carrot.) 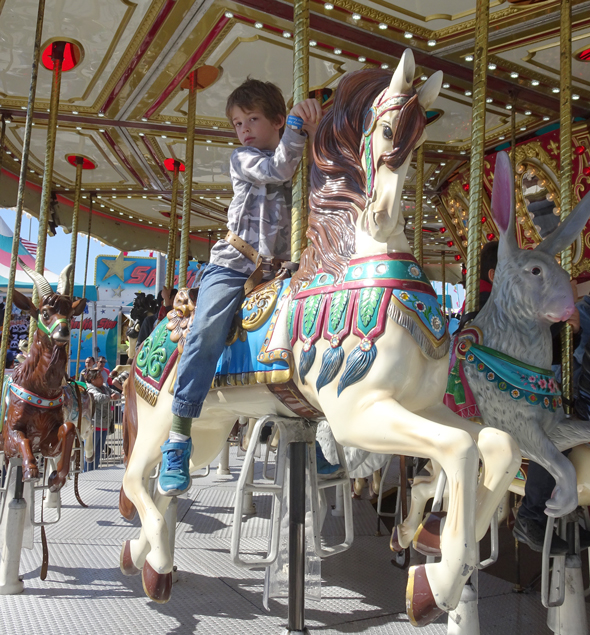 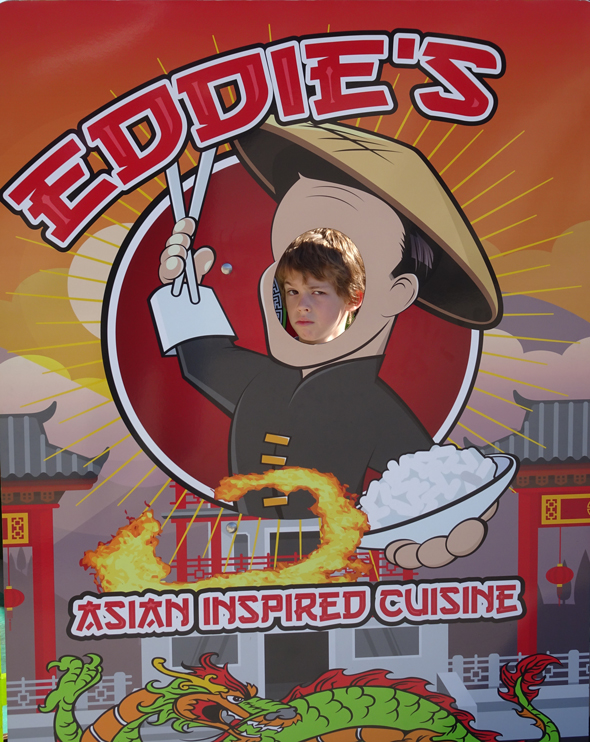 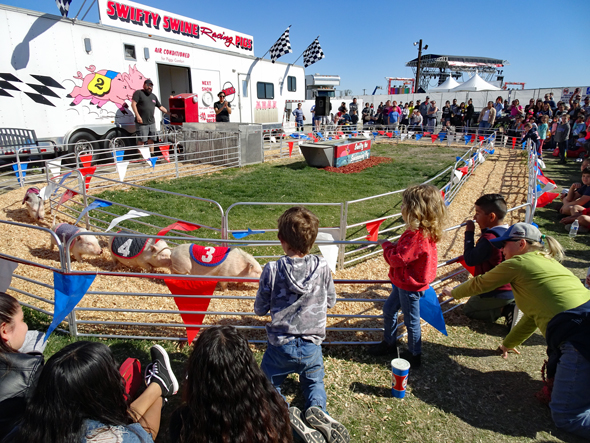 After many rides, we headed over to the agricultural area of the county fair. On the way, the kids participated in cheering for pig #1 in the pig races. Leo was chosen as the cheerleader, promoting the victory of “Ham Solo” in the third race. Ham placed second. The clever names of the pigs really cracked me up: Kim KardashiHAM. Brad PIGG. Lindsay LoHAM. Justin BeBOAR. Sarah Jessica PORKER.

And, of course, Kevin Bacon.

The kids had their photo taken with a few-weeks-old piglet and wore pig snouts the rest of the afternoon.

We went through the barns and talked with Future Farmers of America kids. There were a few teeny baby goats and Lucy and Leo were completely spell-bound by the cuteness factor – and that the babies were so happy to let the kids give them a pet or a scratch. 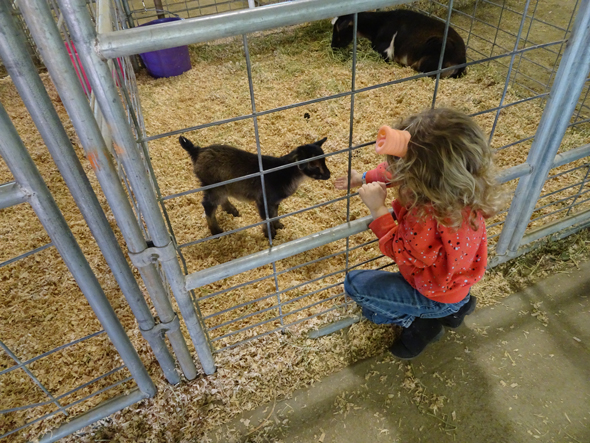 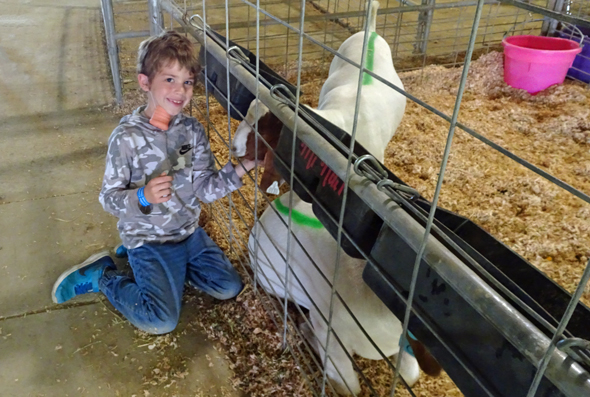 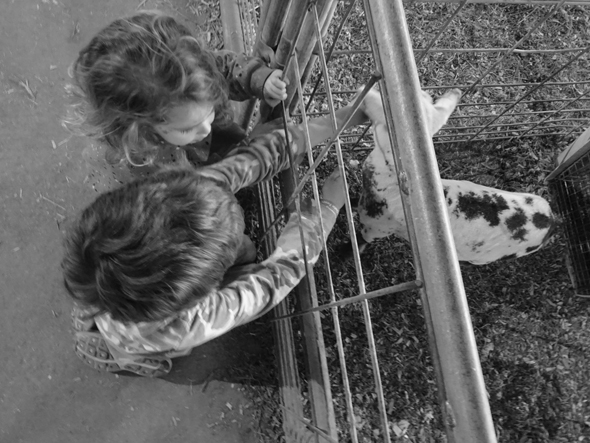 It wouldn’t be a Coachella Valley anything without a camel ride. 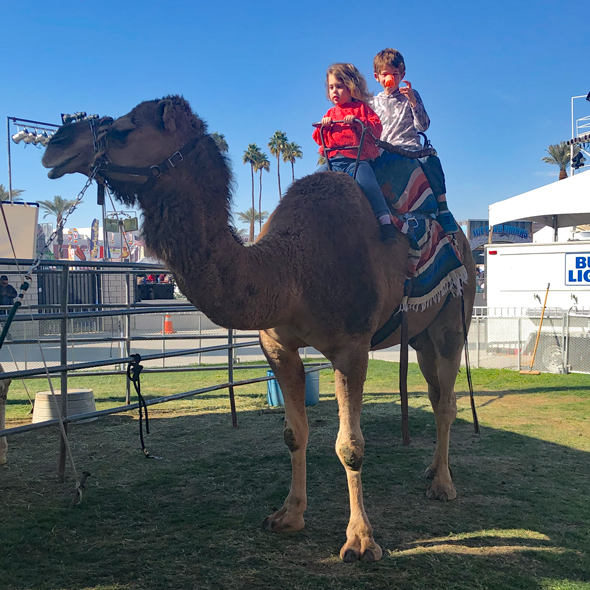 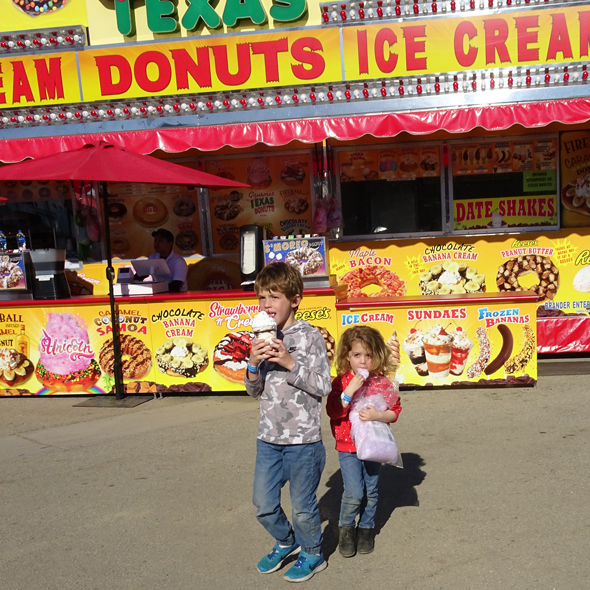 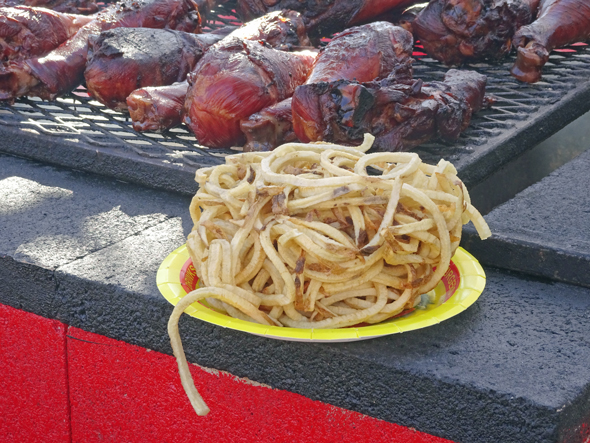 The variety and portions of food served at this fair was impressive. A lot of grilled meat. A lot of Mexican food. 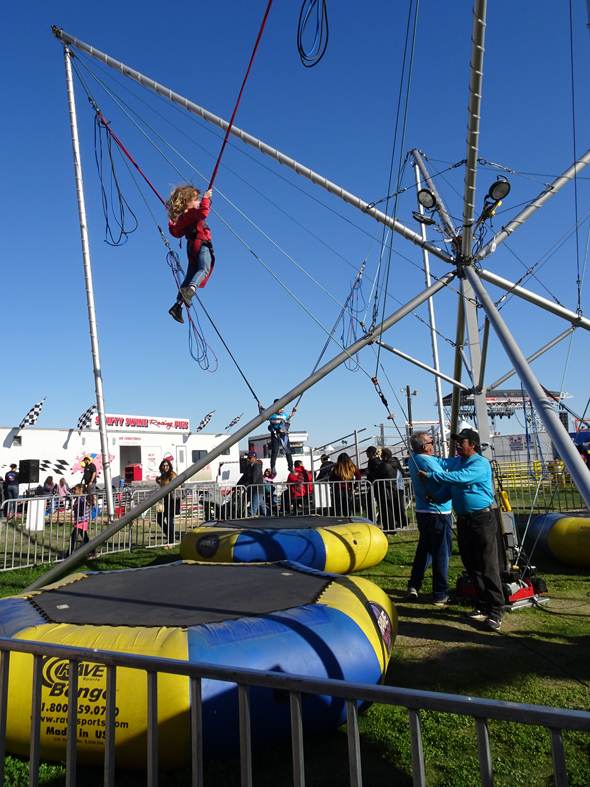 What’s better after half a bag of cotton candy than bouncing up and down in a harness for ten minutes? Lucy really loved this activity and she was so good at soaring high and had no fear.

Time for a few more rides before heading back to the RV: 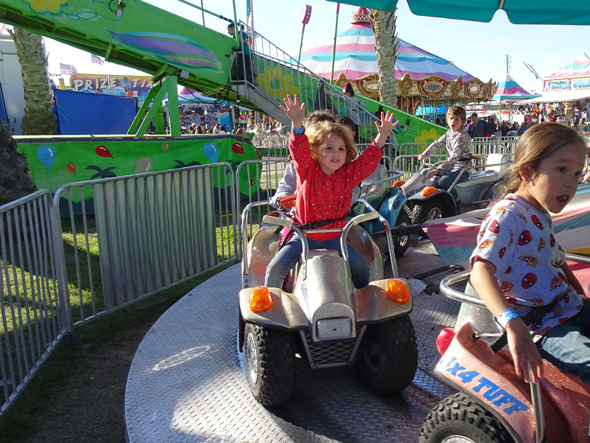 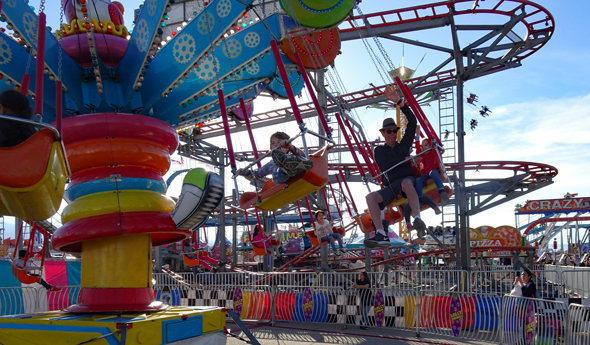 We only stayed at our resort long enough to spiff-up, before heading out to a teppanyaki joint. The kids really enjoyed the “show” of our chef preparing our meals on the grill at our table. The chef managed to fly one piece of shrimp into Dave’s open mouth (impressing Leo). A good time was had by all – but it was a very long day and the kids were both asleep by 8:30p.

Good thing we didn’t stick around Los Angeles for the UCLA game. The Ducks lost this one too. It’s like they don’t even care.