Los Angeles, California: Anyone remember we bought a tour of the ESPN studios in Los Angeles and an opportunity to watch Sportscenter live at a charity auction last summer? The item was donated by SportsCenter host (and Duck alum), Neil Everett. Since the Duck men’s basketball team would be in Los Angeles this weekend, we made arrangements to attend the game, then head-over to the nearby ESPN studio for the late-night show. Why not? It’s still icy cold (and raining) in Indio… and it is still icy cold (and raining) in Los Angeles. Maybe this would be just the thing for our cabin fever? 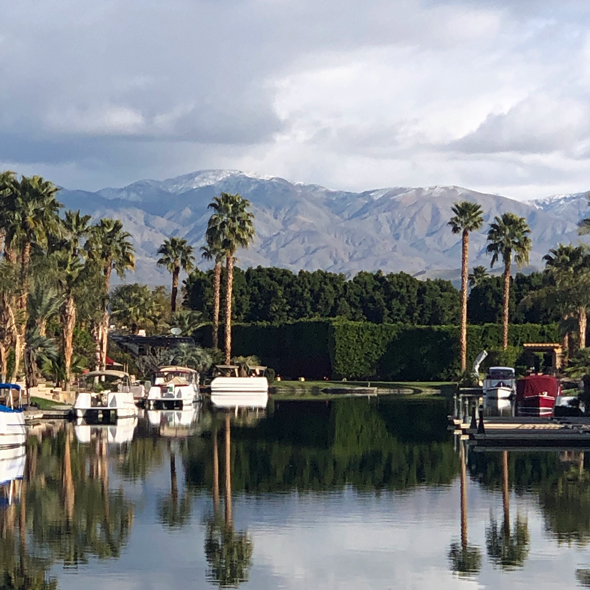 I am  not kidding about the weather. Record-breaking rain, and now, record-breaking days-below-80-degrees. It hasn’t been 80 degrees since Thanksgiving. So very unusual. Snow in Joshua Tree National Park? It’s just crazy out there, people.

Dave and I drove to Los Angeles this morning in terrible cold rainy weather. The skies were so dark in Los Angeles, it looked like impending doom on the horizon, but by the time we reached our downtown hotel, the sun was shining (and 53 degrees). We stayed at the JW Marriott at LA Live because it was fairly close to USC, and next-door to the ESPN television studio. We checked-in and had a late lunch (or early dinner?). We asked the bellman for a taxi, but he said no need – the hotel car would be happy to give us a (free) lift to the Galen Center. How nice, and in a massive Cadillac Escalade. 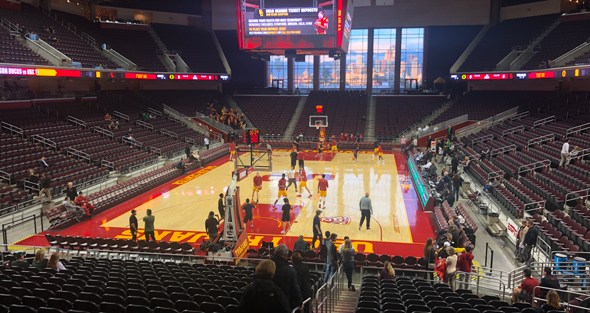 The Galen Center at USC is a brick building with a mural-sized window at one end, framing downtown Los Angeles. With the sun glorifying the city center, it was an impressive sight.

The skyscrapers framed from the Galen Center was the only impressive thing we saw during the game. The Ducks were not impressive in an way. The Trojans were victorious, but the whole thing resembled a high school basketball game in too many way.

Our allotted seats were great – third row behind the Oregon bench – and we were seated with player parents/siblings, University of Oregon President Michael Schill, donors, and actor/Oregonian Ty Burrell (Modern Family). 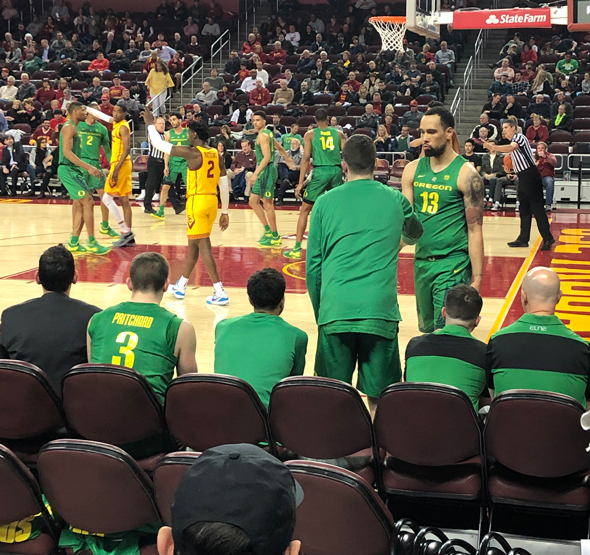 Ears and black hat at bottom of photo belong to Ty Burrell. He wore a hat indoors.

I cannot comment on the Duck loss to SC. The Quackers just stunk the joint up. 66-49. Ouch. It was difficult to watch the inevitable failure.

Wasn’t Oregon in the Final Four two years ago?

As soon as the embarrassing collapse was complete, Dave and I hopped an Uber back to LA Live. This destination includes the Staples Center (where the Lakers & Clippers play), shops, offices, restaurants and several hotels. We had passes for the live ESPN SportsCenter show and were quickly admitted through strict security and having a tour of the facility with Neil Everett.

I may not have the facts 100% correct, but it seems the LA SportsCenter show is live most of the time, but a few segments are taped in advance (and by advance, I mean only minutes before airing). A few stories are aired from the ESPN “home office”/”mother ship” in Bristol, Connecticut, but most commentary comes directly on the fly (or from a script) from Neil Everett and co-host, Stan Verrett. Dave and I were the only two visitors to the set this evening. 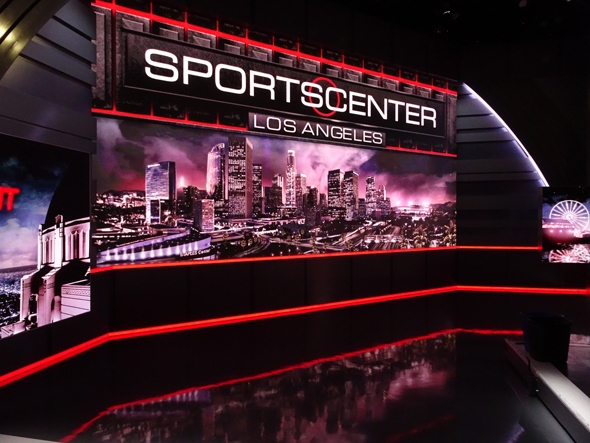 One of the sets at ESPN SportsCenter Los Angeles 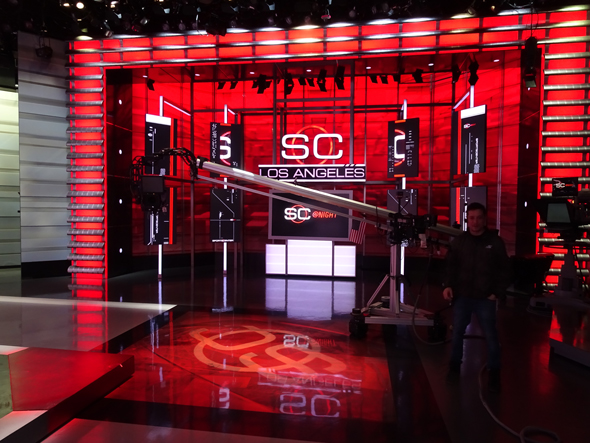 Another set – everything is so clean and shiny. 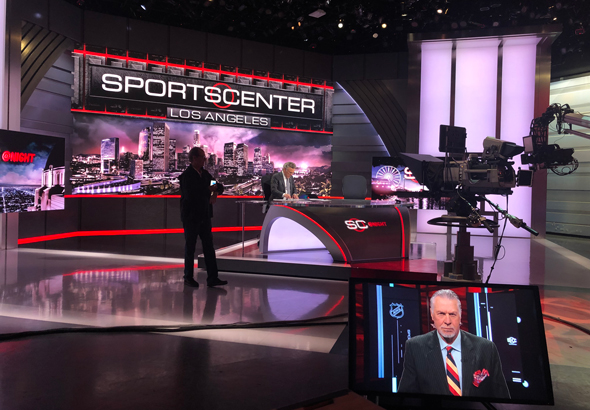 DT (center), standing on the set between takes. Neil Everett was ready to tape a segment with hockey reporter Barry Melrose in Bristol (on screen, lower right). This segment is tapes early, so Melrose can go home (it was midnight in Connecticut). 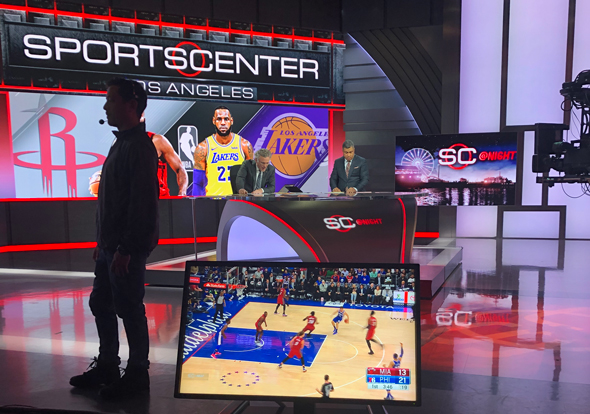 A television (bottom, center) was placed in front of us so we could see what was showing on live TV. While the basketball footage is running, Mr. Everett and Mr. Verrett are reading from their scripts. (The cameraman standing on the left was catching the Laker game – literally next door – on yet another television.) 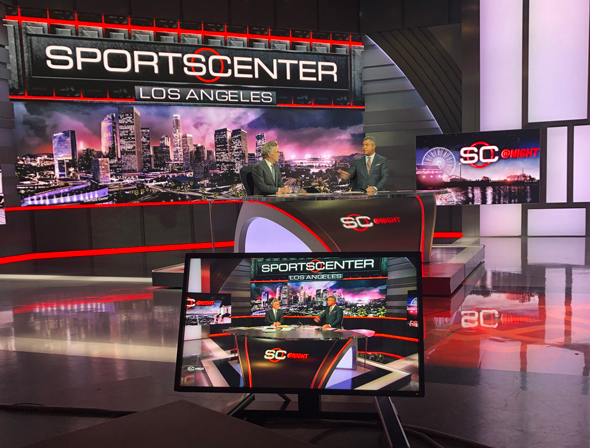 In this photo – the co-anchors are live.

At one point in a production break, Dave and I were taken down to the control room to see how every second of action – live or taped – is thrown together to produce an hour of television sports news. 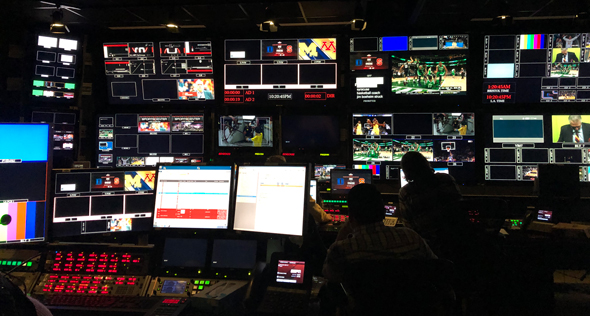 During one of the final segments, Neil Everett gave the Portland Trailblazer for Dave and Terry Taylor – so if you heard it, yes, that was us!

The show airs for an hour, then the hosts need to re-do/add a few things (late game scores… breaking stories about NFL owners caught with prostitutes) for a re-airing immediately after the first show.

What an amazing night. When we purchased the auction item, I had imagined Lenny and Dave would enjoy this adventure together, but Lenny was not available tonight. I filled-in and am so happy. Really an eye-opening event for me… since my only comparison is waiting up late for a Duck score when I worked at the University of Oregon student newspaper. The score needed to be in the paper before we sent it to the printer. Can you even imagine how technology has changed? Neil Everett was actually at the USC v Oregon basketball game for a few minutes this evening (in his spare time).

So sorry for my uninspired Oregon basketball team, but we still had a wonderful day in Los Angeles.