Portland, Oregon:  After writing about the controversial Mexico City Olympics in my column yesterday, I thought today would be a breeze. How can I write about a games that are not yet complete?

Goodness. There was enough controversy TODAY to fill a book. We were up again at 5:30a to watch The World's Greatest Athlete, Oregon Duck alum, Ashton Eaton, compete in the second day of the decathlon. We drank coffee in a very dark house during the 110m hurdles and discus, then closed all the doors and windows and fired-up the air conditioner. It was predicted to be 100 degrees in Portland today. It is the fifth day this summer we have used our air conditioning. Later, we watched the decathletes complete in a very exciting pole vault contest - before actually leaving the house. We went to the grocer. Can you handle all this excitement? I know there is a huge issue with American swimmers telling lies to Brazilian authorities about some-sort of drunken pee-fest in the middle of the night at a roadside gas station. I cannot report or comment on this because I have not paid any attention to swimming. In fact, in full disclosure, I have watched the Opening Ceremonies (only because we thought Leo would enjoy the spectacle, and he did) and track and field. Not one moment of any other sport. Also, I have watched very little of the Prime Time broadcast due to the fact NBC spends way too much time on fluffy stuff, show nothing live during the west coast broadcast, and we have already watched the track and field events LIVE earlier in the day. This morning US sprinters suffered an elbow clip from the Brazilian team during the women's 4x100m relay heats. Allyson Felix was jarred and then unable to get the baton to Duck English Gardener. Allyson Felix dropped the baton. Luckily, Felix has been around the track enough to know what to do. She picked up the baton, handed it to Gardener and told her to continue on. This way, the US team finished the race. Team coaches cannot file a protest if the a race is not completed. It was very important - and smart - that Allyson Felix KNEW what needed to be done. She saved the relay team. Oh. The. Drama. This had never happened before. I can't even imagine the meetings and rule book consulting that went on to decide how to handle the situation. Brazil was disqualified for stepping out of their lane and elbowing Felix. There are only 8 lanes around the track (though 9 on the straight-away), so only 8 teams can compete in the final of a one-lap race. It was decided the US girls would re-race their relay and if they finished faster than the 8th place qualifying team (China!), they would get into the final and China would go home. Naturally, the Chinese team filed a protest. In the end, the Chinese claim was denied. The US girls would have their re-run just before the meet started this evening. Racing without competition, the US women finished in the fastest qualifying time over-all. (Duh.) The Chinese team was bumped-down to 9th place and would not move into the final. Oh. The. Drama. I feel so bad for the Chinese women. What an awful situation. I truly dislike this aspect of sport. What I like best about track and field is that it is not judged (except for race walking, but don't you even get me started on that subject!). Unlike gymnastics and ice skating and diving and dressage and what-ever-the-hell-that-thing-is-with-the-ribbon-dancing-stuff, there is no judging in track and field. Fastest, longest, highest win. That's it. Well, that's it, until someone gets pushed out her lane in a semi-final and drops the baton and a fire-storm begins. It was a great day for Mr. Eaton. He again won the Gold Medal in the Decathlon, equaling his own Olympic record. Kevin Mayer (France) took the silver, and Canadian Damian Warner was 3rd. And it was a great day for a few more Oregonians. Duck Matthew Centrowitz won a place in the 1500m final and Oregonian (he went to University of Texas) Ryan Crouser won the gold medal in the shot put while setting a new Olympic record. His cousin, just-graduated Duck, Sam Crouser, threw the javelin yesterday in Rio. The Crouser family are a famed powerhouse of throwers in the Northwest.

Our Brazil-themed menu this evening was chosen due to a random Facebook post I noticed last week. Someone linked a newspaper write-up about a vegan restaurant with a Brazilian chef in suburban Philadelphia. I wasn't too interested in making the black bean stew with roasted vegetables (did not want to use the oven! 100 degrees!) but was fascinated with the pretty composed salad that accompanied the article.

But, since Thursday is Soup Night at our house, I made a simple Brazilian-style black bean soup (1 pound black beans soaked overnight, water, 1 chopped onion, 6 cloves minced garlic, a tablespoon of cumin, a teaspoon of salt) and let it stew in my crockpot all day. An immersion stick blender went through the soup for about 30 seconds before serving. 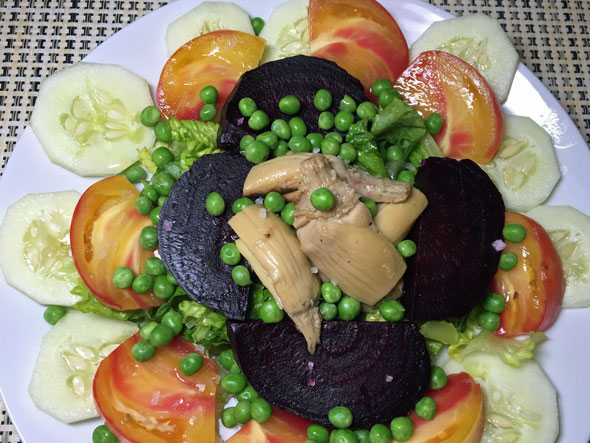 Isn't that simple and pretty? Dressed only with olive oil and flaky sea salt. I get extra credit for using fresh peas and a fancy variegated heirloom tomato. (I roasted the beet yesterday when I used the oven to bake the berry tarts.) A very hearty and healthy vegan meal. 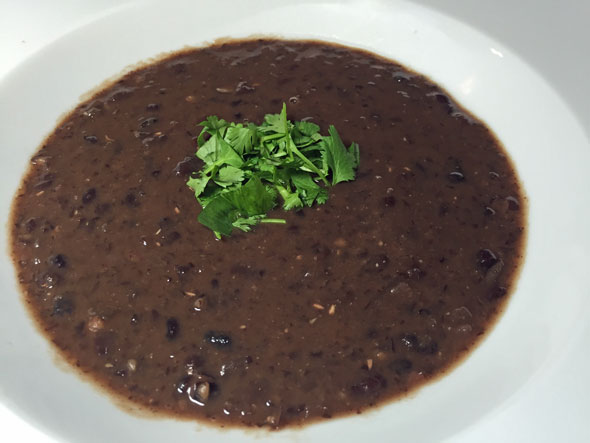 There is no need to rise before the chickens tomorrow morning, because the only morning event include the race walks. If the race walk course went through my bedroom, I would not wake to watch. In the afternoon session, there will Ducks in the relays.

Tomorrow, our menu heads across the Pacific to the 1964 Tokyo Olympics - not to mention the home of the future 2020 games.

Speaking of the future... Lisa sent a photo of Leo working on homework from his first week of Kindergarten. Should I tell him this is his life for the next 17+ years, or should I just let him enjoy the moment? 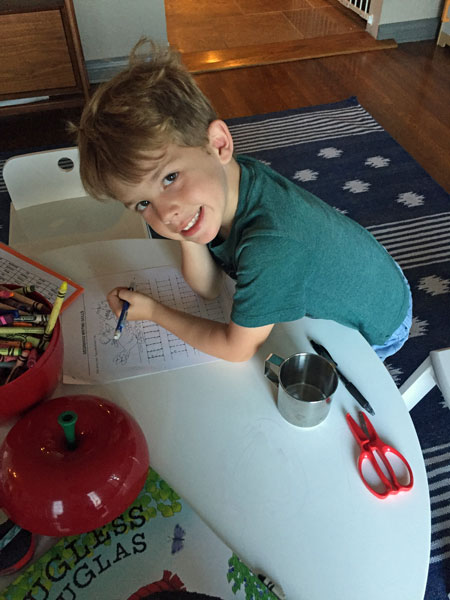 I blew-up the photo and the worksheet is titled BEGINNING WRITING SKILLS. The object is to draw/trace straight lines. Looks like our little lefty is going to get a gold medal star today as well.

Congratulations to the World's Greatest Athlete!