Los Angeles, California: I was up before dawn to watch two Oregon fencers compete in London. Woody & Kathy (and three of their off-spring/spouses) are in London to watch their #3 daughter's best friend, Mariel Zagunis, fence. Plus, US fencer, Seth Kelsey, is a high school classmate of The Lovely Lisa. Anyway, these athletes are from the Portland area... but today was not their day and they both finished out of medal contention. Fourth. Or as the runners refer to it... !@#$%*# fourth. A very sad ending to the games where Ms. Zagunis was honored to carry the US flag during the opening ceremonies. Between watching the matches on-line and facebook/tweets from Woody, it was a very exciting and long "morning"... if you consider "morning" to occur before the sun rises.

Mid-morning, we gathered our belongings and headed out to Portland International to catch a 2-hour-long Los Angeles shuttle to spend a few days with the Cutest Baby Ever. Tomorrow Leo will be one year old! He had his check-up today and - at 19 pounds - proved to be just a few ounces shy of the expected "triple your birth weight at one year" norm. Just like his Momma.

Lenny's parents have also flown to Los Angeles for this momentous occasion, so Leo will have so many people to love and coo over him this weekend! This evening, we all had a lovely meal together at Little Dom's.

As spaced-out as I was from waking before dark, I came alive when I saw this smile: 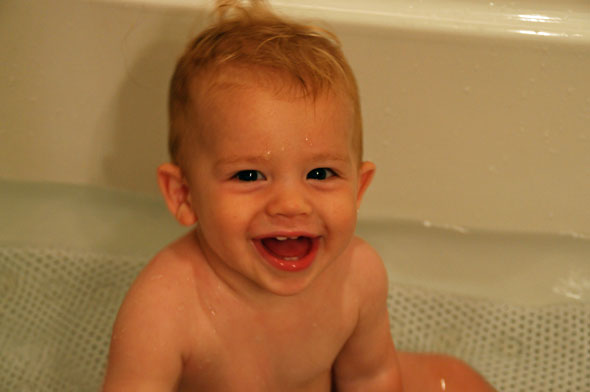 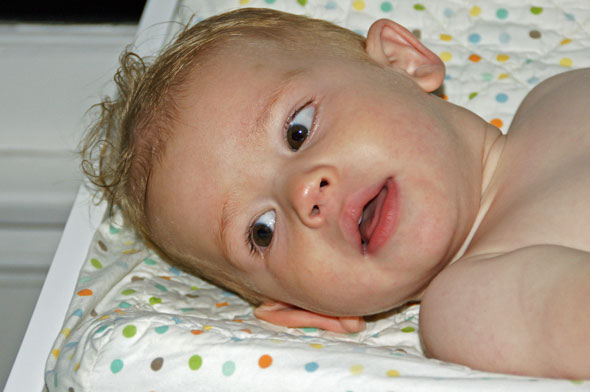 Getting ready for bed, after his bath... Grandpa was taking photos... Grandma was singing... 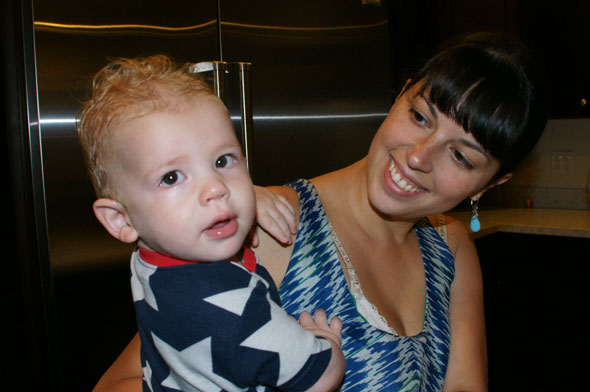 In his pajamas, with his Momma, saying goodnight to his grandparents... Mr. Over Tired is on his way to bed.

Until my next update, I remain, your long-day correspondent.
« Daughter Dinner Leo’s First Birthday »