Boise, Idaho: This isn't the "Take the Weather With You" Tour for nothing. Dang, I wish someone would take this weather with them and go somewhere far, far away. One hundred degrees again. We realized at six/seven o'clock this morning that we had crossed into the mountain time zone yesterday. I did not know this, but my blackberry did and she woke me at 6a so I could run while it was still cool (and by cool, I mean less than 80°). It is still dark at 6 o'clock in Boise and this RV Goddess does not get up before daylight. It's simply unnecessary in my daily life. I hit the snooze button until light was seen. We ran on the track at Meridian High School - GO WARRIORS. Great facility and friendly cheerleaders practicing on the astro-turf infield. I did a speed workout while DT jogged. Dave jogs faster than I sprint, which is fairly pathetic and I have no idea why I would divulge this humiliating information on the interweb for all to see.

Anyhoo... last year DT drove to Boise (in a car) with a bunch of Duck fans for the Boise State game. The weather was lovely in September and they had a great time until Boise State seriously plucked the Ducks and then the "punch thrown around the (college football) world" kinda put a clunker on the entire weekend and the drive back to Portland was miserable. But DT loved Boise and wanted to show me around, so here we are for a few days.

We took our Honda to downtown Boise this morning and had a tour of their State House, as we really enjoy looking at State Capitol Buildings. Though long-time readers of this blog will be surprised, we have only been to 20 of the fifty State Houses (plus the US Capitol in Washington, DC). 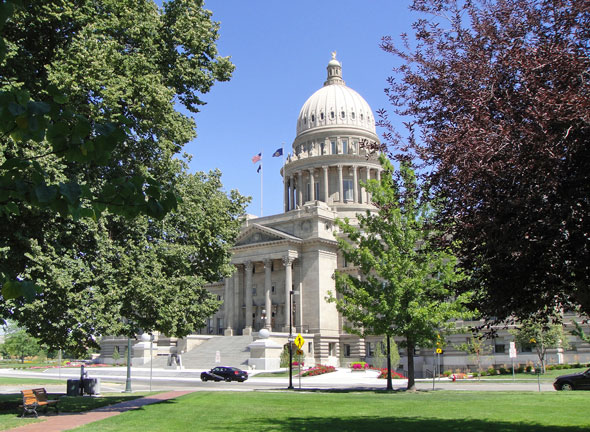 John Tourtellotte designed the Capitol, using light shafts, skylight and reflective marble surfaces to capture natural sunlight. The columns only appear to be marble, but have a finished surface composed of scagliola - gypsum, glue, marble dust and granite dyed to look like marble. Most everything else is the real deal - marble is used extensively throughout the building. 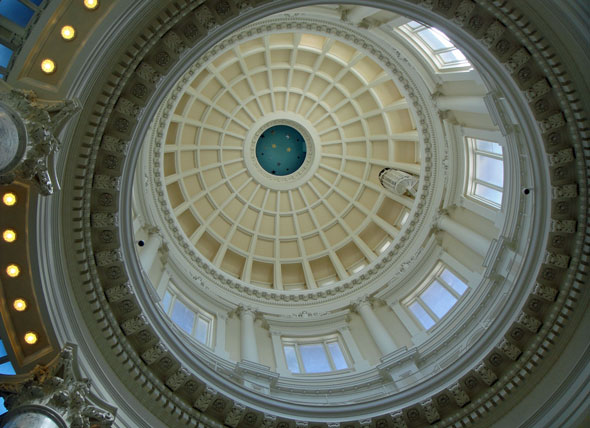 Wasn't it nice of Idaho to greet the Taylor Family with a (replica) statue of Nike of Samothrace? 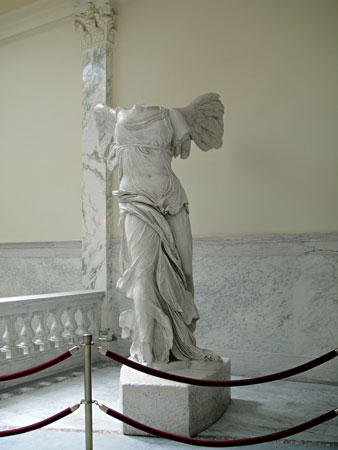 Also called Winged Victory, the 400 BC statue of Nike (the Goddess of Victory) was discovered in 1863 on the Greek island of Samothrace by a Frenchman. It now resides in the Louve Museum in Paris. The City of Paris gave this replica to the State of Idaho as a thank you to the US for its aid in liberating France from Nazi Germany in World War II. (I guess liberating an entire country is only worthy of a replica.)

Wasn't it nice of Idaho to greet the Taylor Family with a statue of George Washington - founder of The Lovely Lisa's alma mater? 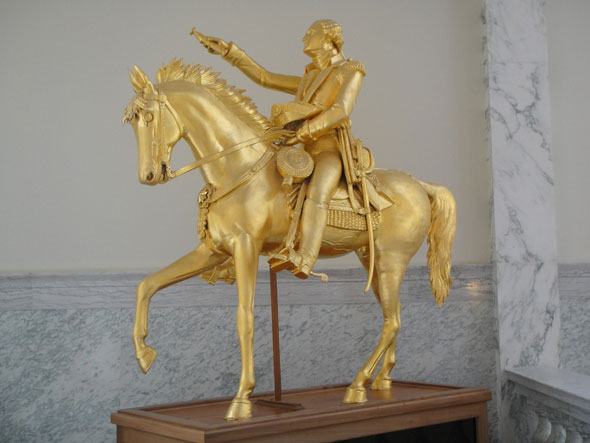 Charles L. Ostner carved this statue of Washington in 1869 of Yellow Pine and gilded it with gold.

I made a little video of our tour through the Idaho State House - enjoy! And if you are in your office - turn-down/mute your speakers!

Next on his itinerary, DT led me to The Flying Pie Pizzaria, about three miles west of the Capitol Building. They make a great pizza at Flying Pie, but are famous for a pizza they only serve in August. For the past 17 years, every August, when the chilies are at their peak, they prepare a pizza topped with sliced Habanero chilies. The menu claims the few Habanero chili slices used on this pizza is equal to putting 14 POUNDS of jalapeno peppers on a 12-inch pizza. These babies are hot! The restaurant actually offers milk to accompany the Habanero pizza. 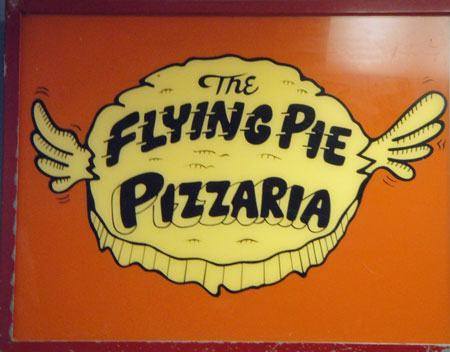 In 2009, the Travel Channel's Man v Food made a visit to Flying Pie and Adam Richman ate the spicy pizza. The peppers are so fiery, special care must be used in the restaurant - gloves, of course, but also separate pans, knives for slicing, spatula's for serving, etc. Cross-contamination could actually injure an unsuspecting customer. 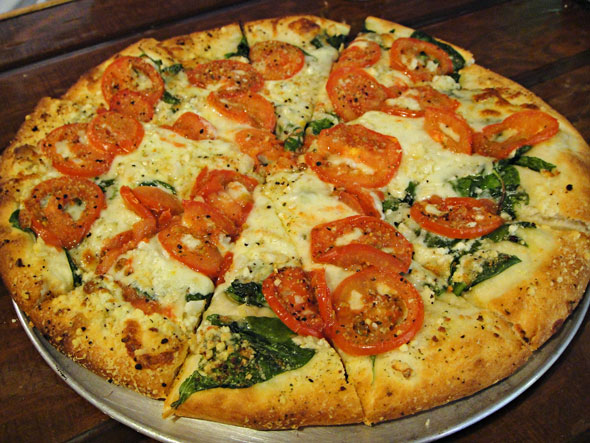 Did we have the Habanero pizza? What? Are you nuts? No way. We are wimps. We had the Zerto Magnifico without the sausage: spinach, tomatoes, mozzarella, pecorino and parmesan. It was a very decent pizza. We did watch as a group ordered a spicy Habanero pizza. (Our eyes burned as the waiter walked past our table while delivering the pizza.) They munched away, claiming it wasn't that hot. (Let it be known, this group of fire-eaters were raised in a country where the food is very spicy.)

Next on "Tours by DT" was a walk-around tour of adorable downtown Boise, in the shadow of the Capitol Building. 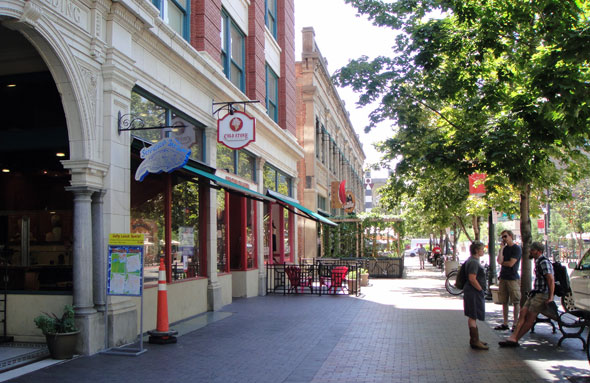 Many of the streets have been closed to traffic and the city is very small and pedestrian-friendly. 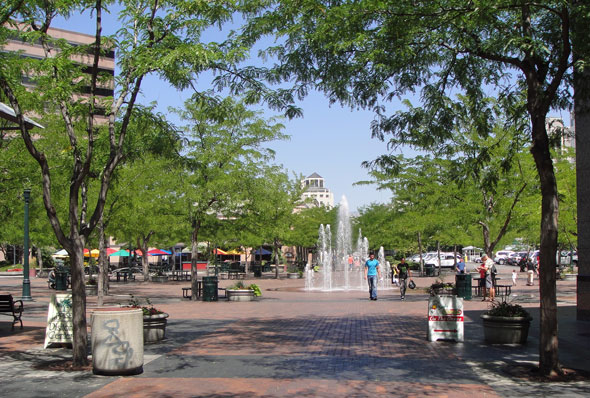 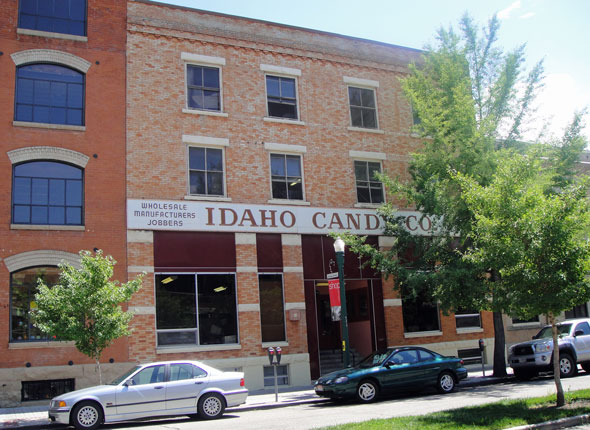 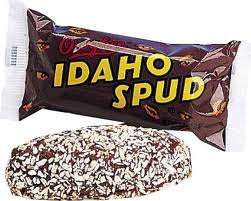 Nancy (Lisa's Godmother) said we needed to find her an Idaho Spud. Nancy remembers traveling (from Portland) to Boise as a child and enjoying this Idaho treat. So we did. Not only did we find Miss Nancy the candy bar, we found the Idaho Candy Company factory where the potato-shaped confection is still made. (I do, very vaguely recall this candy bar.) The locals rave about the treat and say the Idaho Spud is especially delicious frozen... which is a good thing, because we bought a few for Nancy and put them in our freezer. 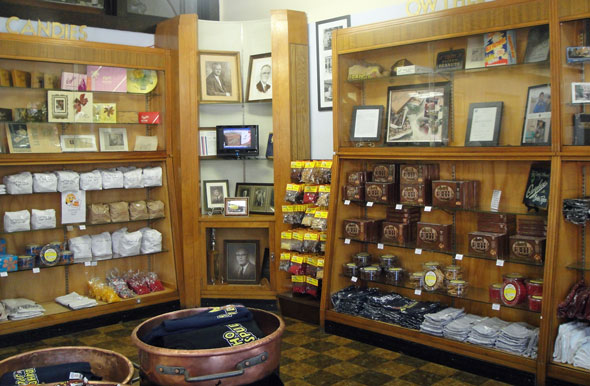 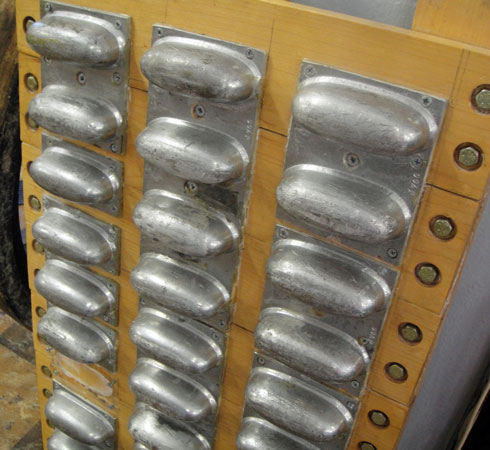 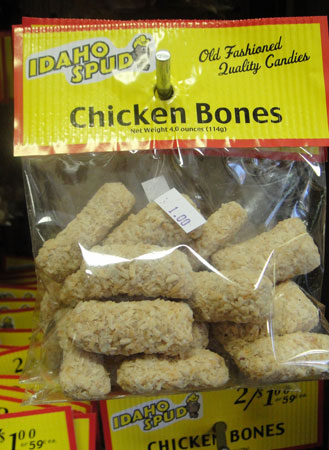 DT and I both remembered Chicken Bones. Do you?

Not getting enough sugar, we visited the chocolat bar - a gourmet chocolate shop where everything is hand-made on premises using only the best quality ingredients. 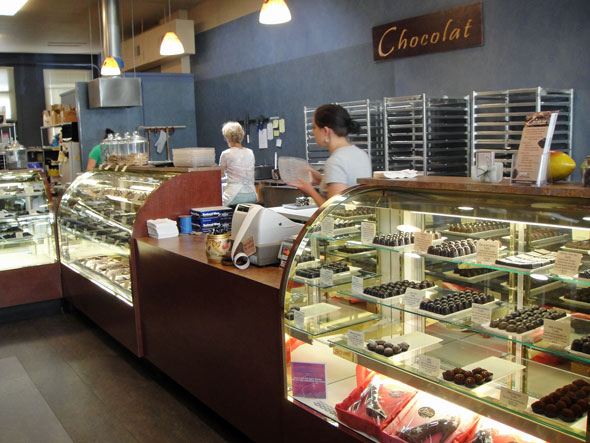 City Peanut Shop (DT's favorite addiction) and bought just-roasted-still-hot Virginia Redskins! One last stop to a very good grocery store, the Boise Consumer Coop, where if you are from out of town, they waive the membership requirement. We found beautiful organic produce and an over-the-top cheese selection. Highly recommended by me, but what do I know?

NOTE: How can we buy chocolates and vegetables in 100-degree heat (not to mention leftover pizza)? Our pizza was on ice while we shopped and the Idaho Spuds and treats from The Chocolat Bar were kept cold because I never, ever, never, ever leave the bus for a day touristing without a cooler filled with an ice pack or two. Even if the weather isn't blazing. Even if you only are planning to visit a museum. You never know when you are going to find a cheese shop, a wine shop or a fresh fruit stand. Restaurants serve such large portions, so bring home the leftovers safely. Re-freezable ice packs are essential - keep a few in your RV freezer at all times.

After all this excitement, we came back to the bus and took naps.

You would think we were done for the day.

DT - my Boise tour guide - had heard about Gino's Restaurant, 208-887-7710, 3015 W McMillan Rd, Meridian, ID 83646. Gino's used to be in downtown Boise, but impending construction forced them out to the 'burbs. And I mean ELEVEN miles from downtown Boise. The food is so good and the menu is so diverse, the crowds continue. I ordered Veal Milanese (one of my all-time favorites and something not on every Italian restaurant menu) and it was very good and only $18. Gino's also has a very good wine list, and with over 100 items on the menu, I just don't see how you could go wrong. 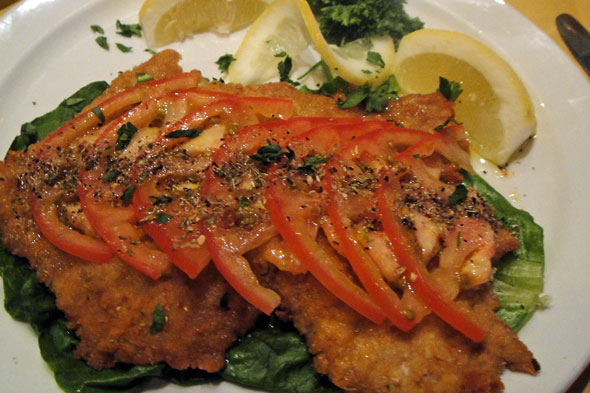