Craters of the Moon

Craters of the Moon National Monument, Idaho: I am tired of talking about the weather, so let's just say it was hot this morning in Boise. We hit the road, pointing the bus east on I-84 and took a left to follow 26 to Craters of the Moon National Monument. We have camped here several times before, but the lure of ice caves, lava formations, lava flows and cinder cones is just too much for My Driver to resist. We will come here again, I suspect.

Dry-camping sites are available at Craters of the Moon. Very nice, clean and a fun spot to camp. First-come, first-serve and there are only about 6 sites (out of 51) able to handle our beast. We arrived around noon and claimed our spot - at nearly 6,000 feet elevation - for the night.

Nothing to hook-up to here - we just parked, leveled, put out the slide rooms and awnings, then pointed the internet dish up to the sky (camping schamping - there is no cell service in the park - so I wanted internet). 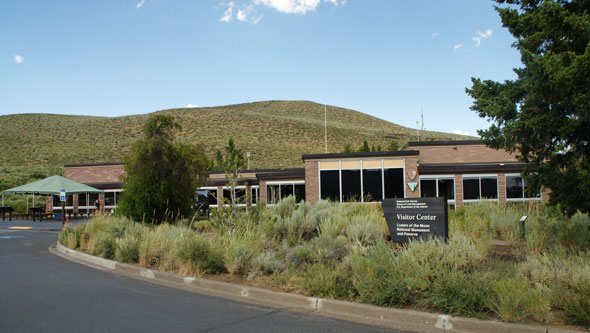 We grabbed binoculars, flashlights (for spelunking), cameras, hats and water bottles and headed out to explore the park. Our first stop was the Visitor Center where we obtained information and maps (and learned that many areas of the park are closed due to re-paving). 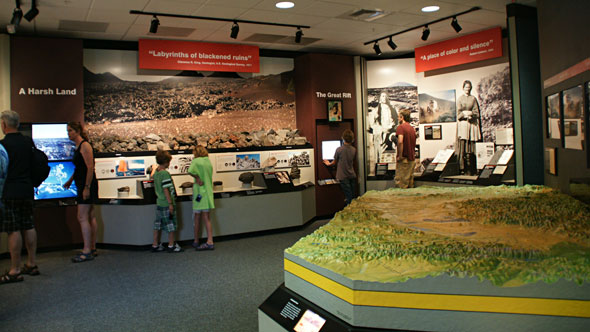 We checked-out the informational displays, watched a video about the park before driving the scenic loop through Craters of the Moon in our Honda. 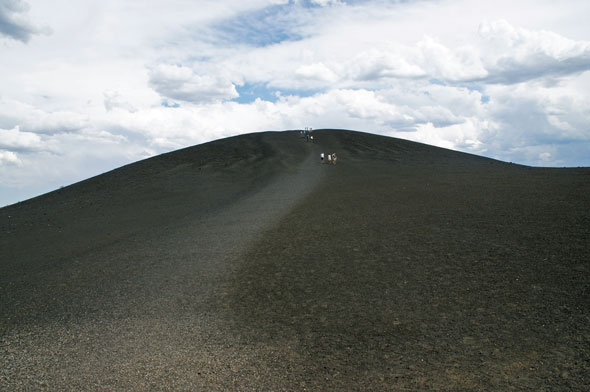 We huffed and puffed hiked to the top of 6,200 foot Inferno Cone, a massive cinder cone. 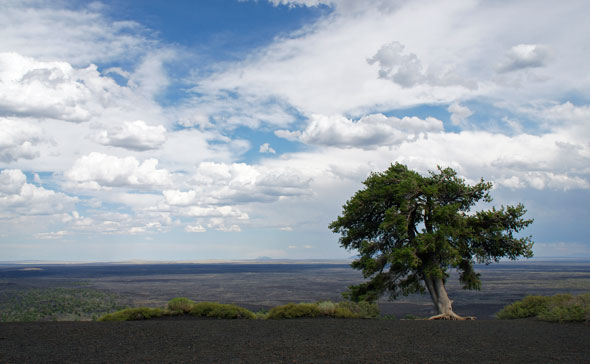 The view (east) was spectacular. 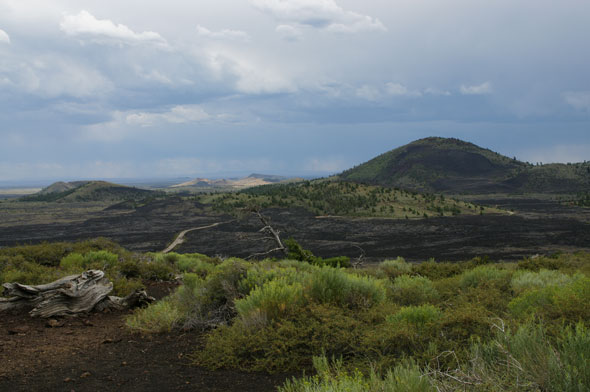 The view southwest was spectacular. 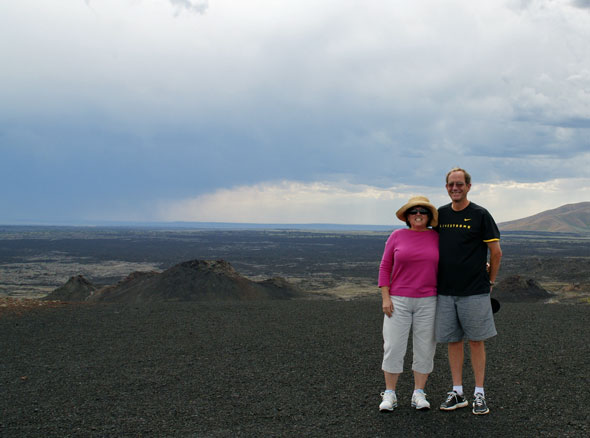 Conquerors of the Cone! 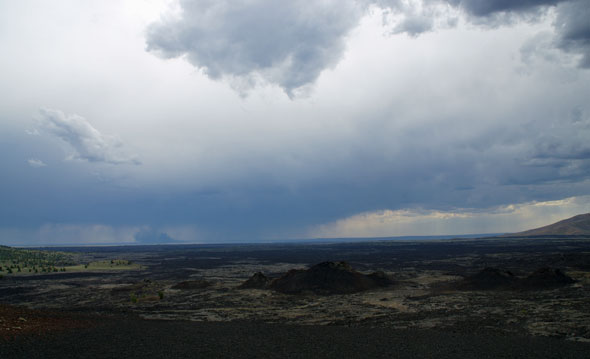 We wanted to walk around the two spatter cones at the base of Inferno Cone (bottom right of the photo above), but noticed the weather was turning quite nasty. 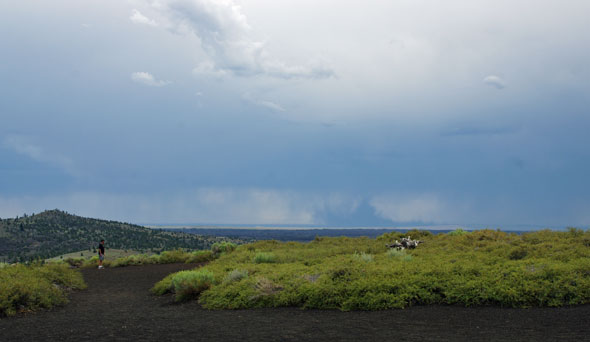 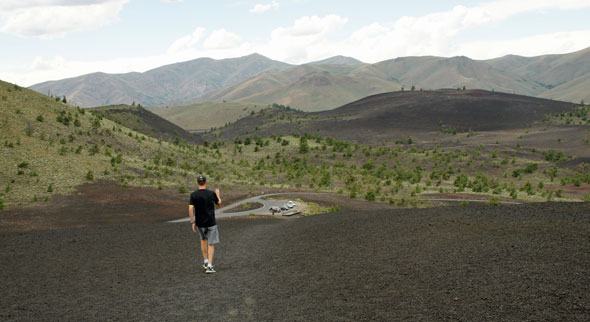 We decided to take the plunge back down the cone to the safety of our car. 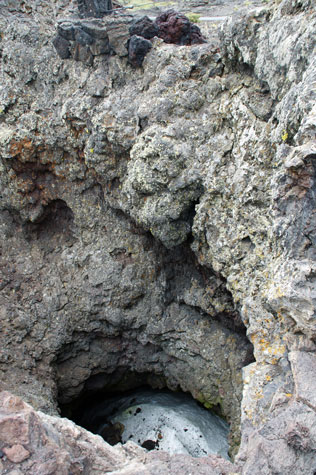 We spent a few moments looking around the spatter cones. We found snow in the bottom of one of the vents. 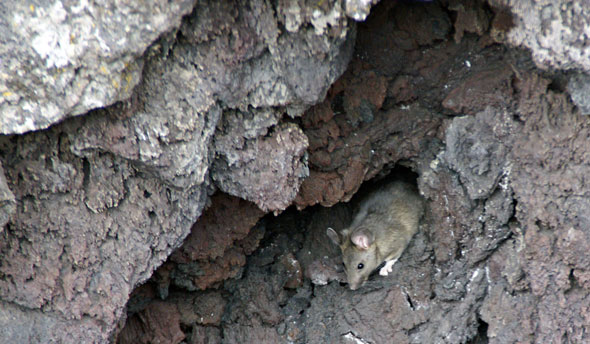 We found a rat in another. 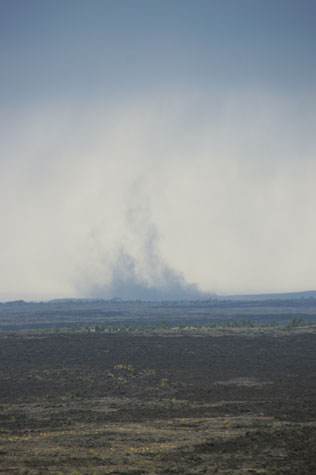 Now it was just getting dangerous. 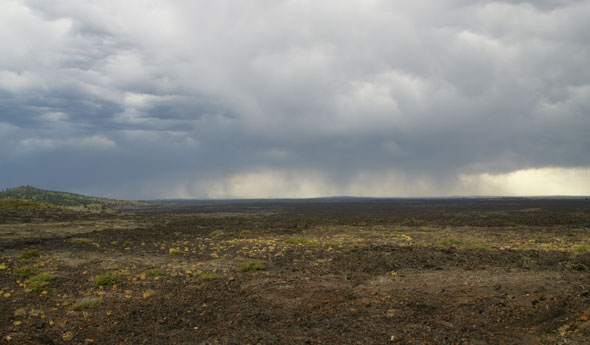 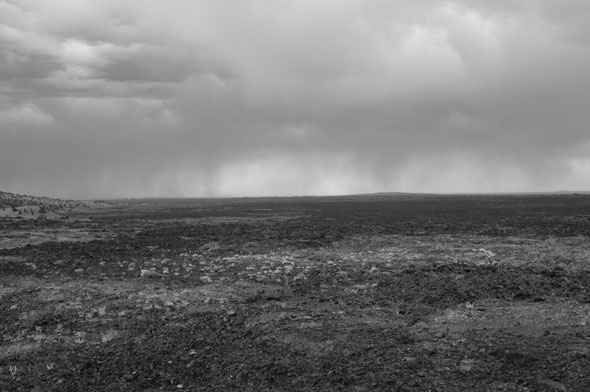 This black & white photo is just for fun. Sorry to waste your bandwidth.

We went straight back to the motorhome and barely made it inside before our bus was blasted with gale-force winds. Well, honestly, I have no idea how strong gale-force winds are, but the wind was strong enough to rock our 54,000 pound bus. We pushed buttons everywhere to bring in window awning and stow the internet dish. We left one window open a crack and then spent the next hour wiping down every surface in the living area - it was covered with grit sand volcanic sediment. Thirty minutes later, it was all over and the sun came back to charge our batteries via the solar panels on our roof. 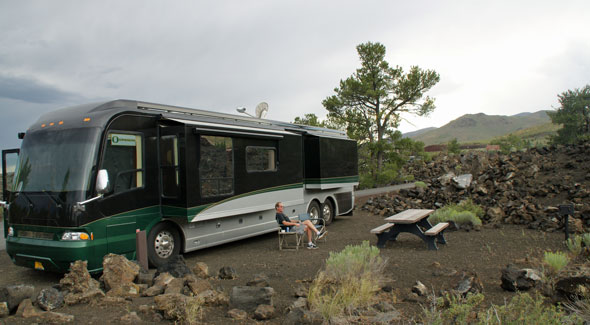 Cocktails... which we enjoyed outside for about thirty minutes - when another squall came along and forced us to hunker-down indoors for the remainder of the evening.

Until my next update, I remain, your "gee, that rain smells good" correspondent.