Portland, Oregon:  I convinced My Driver to take a few hours away from his laptop this afternoon. It wasn't a difficult chore. After a batch of bad weather, a very hot weekend is predicted. Sun. Blue sky. 90-100 degrees. A good day to play hooky.

A new "food court" had recently opened downtown Portland. Being Portland - land of farm-to-table, organic, locally-sourced and sustainable foodies - this was not going to be a typical mall or airport food court with chain burgers and gummy pizza. This was going to be something spectacular. 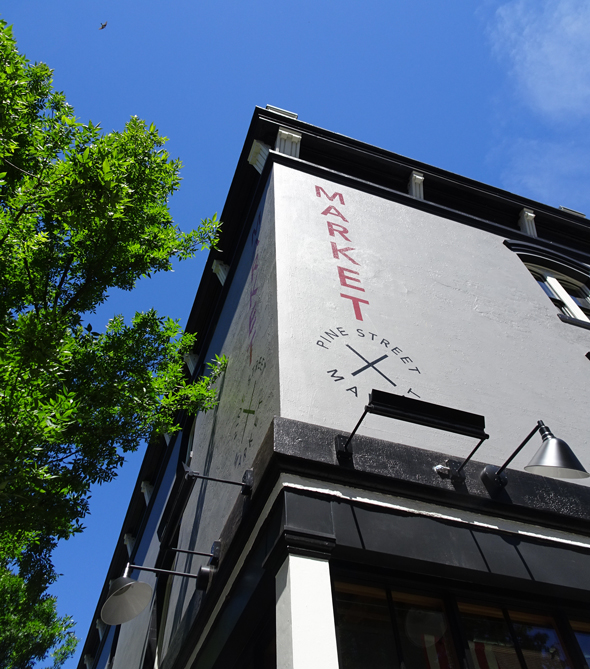 And it was. And it was crowded. Bustling. Nine walk-up  restaurants in 10,000 square feet. Communal, bus-it-your-own-self tables. Semi-organized chaos. 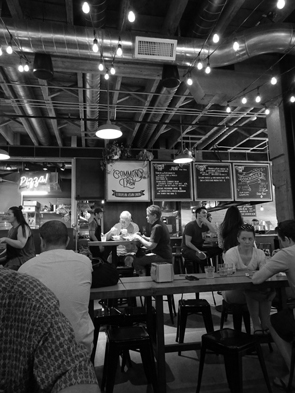 Dave and I walked around Pine Street Market (2nd & SW Pine), looking at menus, and getting the lay of the land. A few new faces, but also several old-time Portland chefs have opened small restaurants in the market.

We settled on Marukin Ramen as it has been getting the most attention in the press (ramen is taking over America, people!) and there were two empty seats at their counter. Win-win. 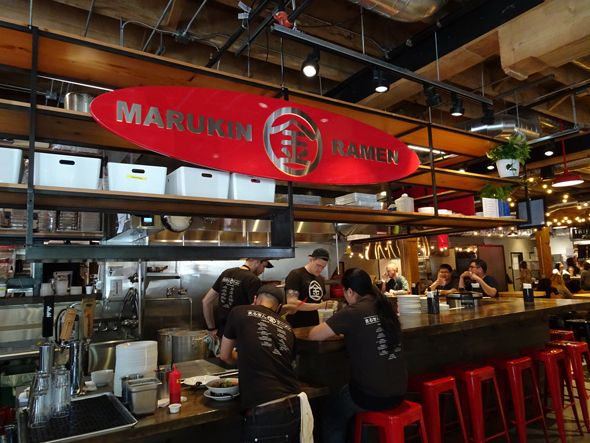 Marukin Ramen have nine stores in Tokyo and two in Portland. They have a very (very) small menu, offering only two different ramen soups a day and the soups change daily. One broth is either pork-or-chicken based and the other is always vegan. Each broth is carefully made in nine different steps. The other three items on the menu are Age Dofu (fried tofu slices in a light sauce), Pork Gyoza (meat dumplings) and Chicken Karaage (Japanese version of boneless fried chicken). One beer choice. Really could not be more simple.... yet DT counted nine workers in the teeny booth. The ramen is really, really good. Maybe the best I have ever tried? 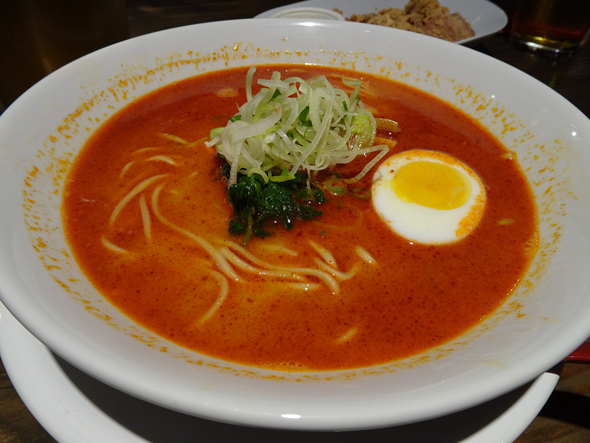 We split the chicken-based bowl of ramen. It was spicy and we finished the entire bowl. This massive bowl of noodle soup was $10. 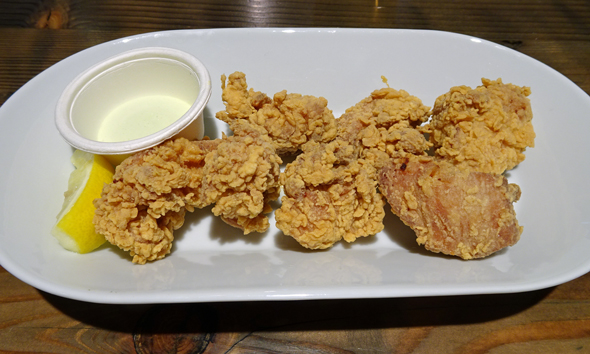 We also shared an order of karaage - served with a wasabi-mayo sauce for dipping. 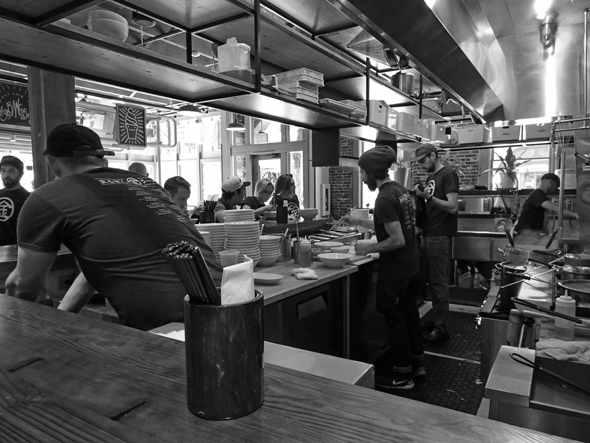 After lunch we again cruised through the market. The late-lunch crowds had cleared a bit so we could explore menus better and take a few photos. 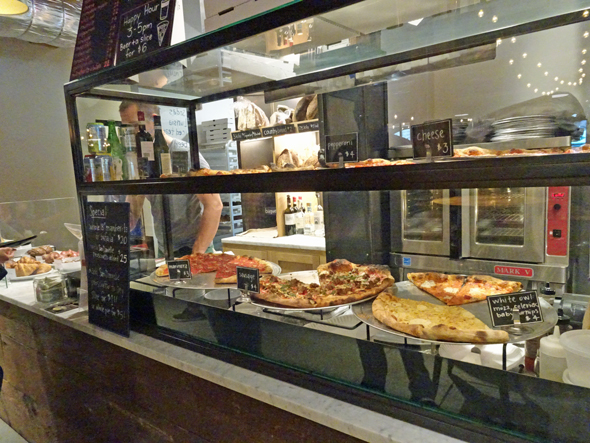 Portland's favorite bread/pizza baker, Ken Forkish (James Beard Award winner and best-named chef ever!), has opened a small place in the market, Trifecta Annex. He sells pizza by the slice/pie and other baked goods (croissants, etc). 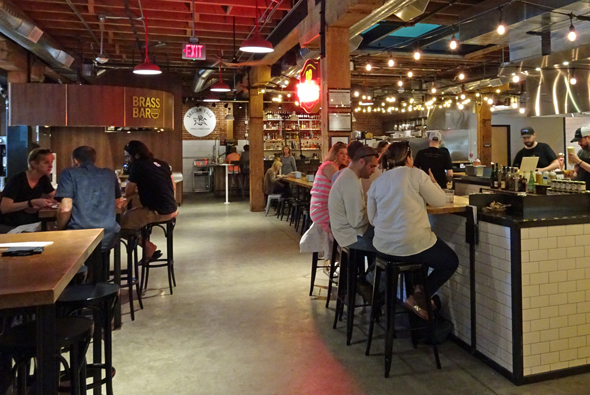 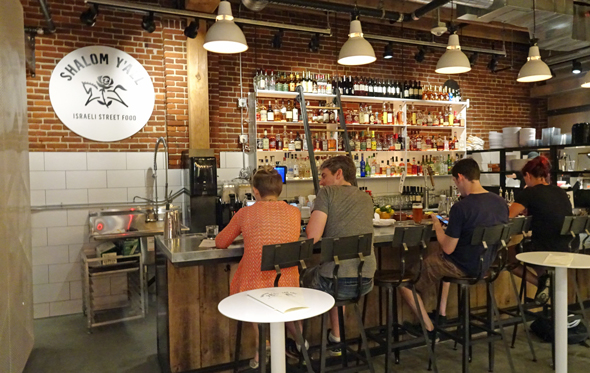 Shalom Y'all sells Israeli street foods - hummus, falafel, shakshuka, lamb, chicken shawarma, pitas, Israeli Salad. Still not sure about the name of the restaurant. I was expecting a Southern US-Israeli blend... happily that is not the case. Would love to go back, as everyone had gorgeous plates of food at their tables... but I cook a lot of these dishes at home.

Our bellies would have been perfectly full if hadn't decided to try Salt & Straw's new soft serve joint. Damn you, self discipline! Salt & Straw became an instant success from the moment they opened their first ice cream shop in Portland a few years ago. They a have ridiculously different flavor combinations, relying mostly on local ingredients. You know the Arbequina olive oil I love from Red Ridge Farms? Salt & Straw uses it in their olive oil ice cream. Yeah, they make chocolate and vanilla as well, but how about Pear & Blue Cheese? Strawberry Honey Balsamic with Black Pepper? They even make a corn ice cream in the summer. 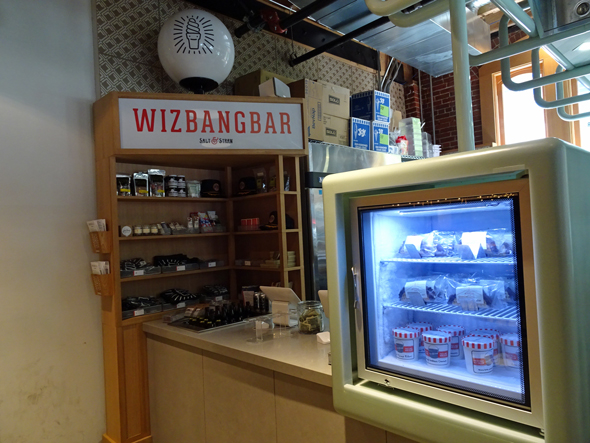 They have three shops in Portland, three in Los Angeles and now have their first soft-serve shop in the Pine Street Market, Wizbangbar. 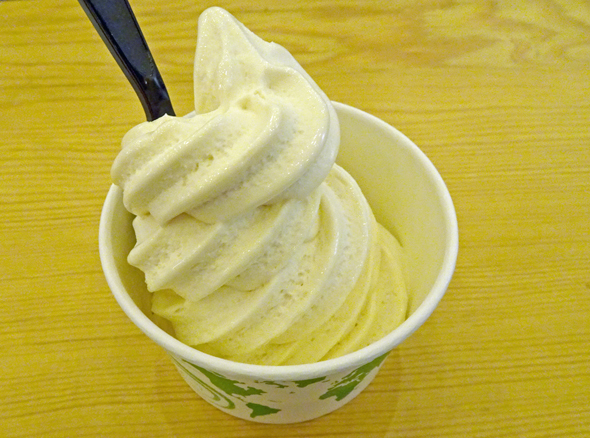 We tried Sea Salt Caramel. We did not share.

This was a great field trip. We had a blast talking to our chef at the Marukin Ramen and will try the market again when the crowds thin a bit. If they ever do. The Pine Street Market would be a great place to take a group of people - everyone could try something different and hopefully share!

Until my next update, I remain, your "I should get paid by the Oregon tourism bureau" correspondent.