Count me in on the people who feel chicken does not belong on pizza list. When did this trend begin? I remember something about Thai Chicken Pizza first. Maybe in the early 2000's? Thai + Pizza were two words that did not belong together. Pizza was Italian. Red sauce. Mozzarella. Herbs. Done and done.

Not only am I getting older, the world is getting smaller. We can now eat Korean tacos. Burgers are the new food rage in Paris. Corn is in ice cream. We just had perfect Tokyo ramen in Oregon.

About five years ago I had chicken on pizza for the first time in Los Angeles. It was a homage to Syracuse (not Buffalo), New York and featured diced chicken in a spicy sauce, but with ranch dressing (versus blue cheese that one would find served with Buffalo wings). The pizza is very good. Very good. We find time have a slice most times we are in Los Angeles.

This pizza turned me into a member of the "Chicken Belongs on Pizza" camp. (Probably causing me to lose membership in several other foodie organizations, but I don't care. I'm out. Get over it, people. Chicken can be on a pizza crust and the world will not end. 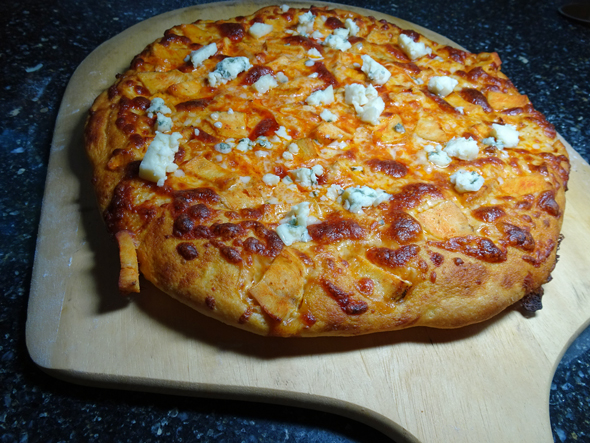 See? I make a pizza most Sundays if we are home (or not out for pizza with our friends). Poor DT. I have been experimenting with this Buffalo Chicken pizza several weeks in a row. He is such a trooper. All the pizzas have been consumed. Some were too spicy. Some were not spicy at all. Finally, Goldilocks showed up and I prepared a pizza that was just right. 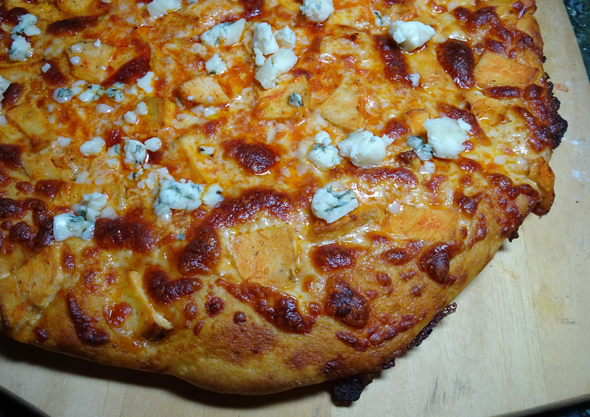 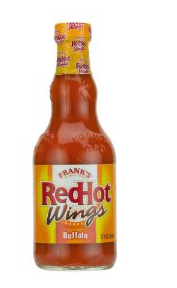 Make a simple dough (my recipe is below), use a store-purchased crust (Trader Joe!) or ask your local pizza place for a chunk of dough. They usually oblige... often just for a donation to the tip jar.

Meanwhile, prepare the ingredients for the pizza, bring the pizza toppings out of the fridge to warm up a bit - a risen pizza crust does not like cold ingredients! 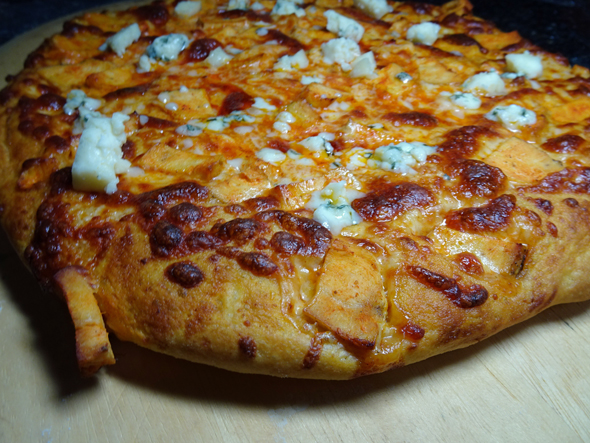 Melt 2 Tablespoons of butter and mix it with the remaining 1/4 cup Wing Sauce. Set aside. Heat the oven to 525° (or as high as your oven will go).

TO ASSEMBLE THE PIZZA: Use a pastry brush or the back of a spoon to spread the butter and wing sauce mixture completely over the prepared pizza crust. Sprinkle the shredded mozzarella evenly over the pizza crust, followed by the the marinated cubed chicken pieces.

Bake until bubbly and browned around the edges, approximately 9-10 minutes at 525°. Remove from oven and immediately sprinkle the crumbled blue cheese over all. The blue cheese will instantly melt. Slice and serve.

Makes one 12-inch pizza, serving 2-3 people. The pizza is just a bit spicy. 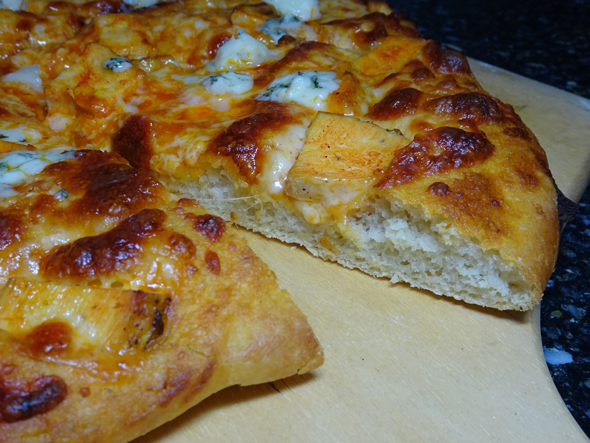 NOTES: I roll pizza dough out on parchment paper, but bake it on a hot pizza stone. The parchment paper makes sliding a prepared pizza onto the hot stone (using a pizza paddle) a breeze. Just trim the paper to a one-inch border around the dough, and bake the pizza along with the parchment paper. The paper easily slips-out from under a baked pizza - and an easy clean-up. The pizza paddle also aids in removing a hot pizza from the oven and doubles as a cutting board and serving board.

Mix the water, olive oil and yeast in a medium bowl. Let the yeast soften for about five minutes, then stir in the salt and flour. Mix well. Cover with a towel and let rise in a warm place (in the oven with the light on?) for 60-90 minutes, or until doubled in size and bubbly. This will make enough dough for a 12-inch "thin" pizza.

* I use Franks Red Hot Wing Sauce. Do not use Tabasco Sauce - it will be too hot.

Until my next update, I remain, your "please never put kale on pizza" correspondent.