Beijing, China:  I discovered a new corner of the hotel breakfast buffet this morning - a gluten-free section. I was pretty surprised, but don't know why. This buffet is super-accommodating and filled with foods from around the world. They also have several foreign workers. Yesterday we met a young girl from Purdue University who is doing an internship in the hotel as part of her Hospitality major. She lives in the hotel and they do her laundry once a week. 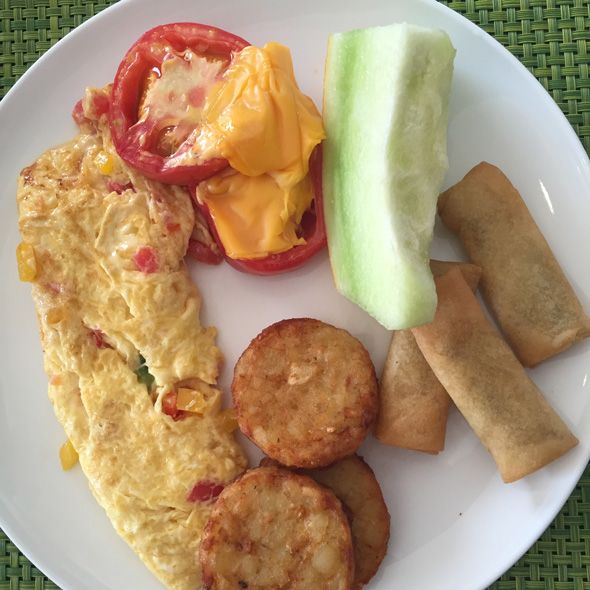 Today I ordered a tomato, pepper and cheese omelet from the egg bar, hashbrown patties, grilled tomatoes with "cheese" (I do not eat this plastic cheese), fruit and three veggie egg rolls.

We talked with Galen Rupp this morning and told him about our Peking Duck track meet scoring game. He laughed and promised a few more points for the Peking Ducks during the 5000m.

After breakfast, we walked over to the track for the morning session. It was a true 3-Ring Circus this morning with the men's discus, women's high jump and women's 5000m heats happening at the same time. 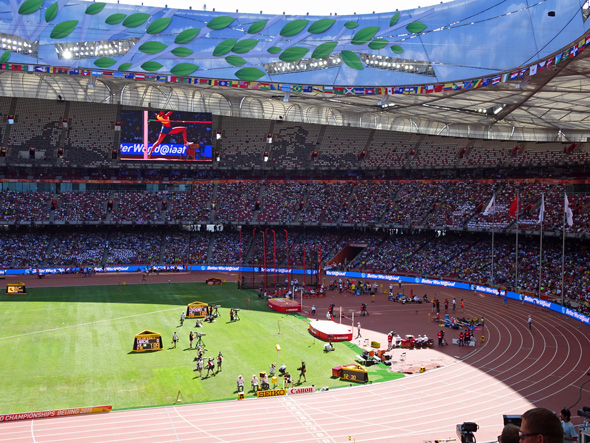 Three Americans in the women's 5000m and only one (Nicole Tully, in the first heat) made it out to the final. The second heat was very strange. Very. First, a Russian girl simply jogged-off the track into the bowels of the stadium where she had appeared from before the race. A little later Maureen Koster of the Netherlands fell down with 500m to go. Just dropped to the track. Medical staff came out to aid her, but hesitate to touch fallen racers. If a fallen competitor gets up unaided, they can continue on and finish the race. If they are aided, they are toast. 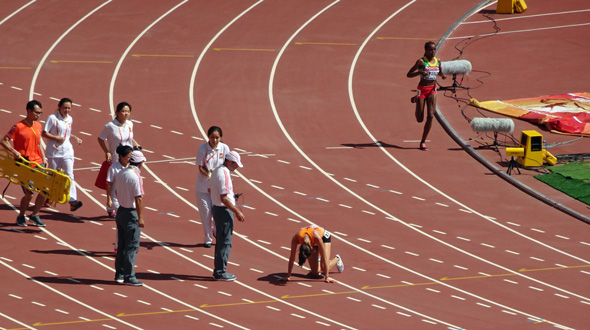 Koster was toast. She stood up on her own but was staggering. It was pitiful to watch and I was hoping the doctors would realize Koster wasn't going to run another lap and a half. They did, and immediately took her under the stadium for medical attention. As the race ended, several other girls plopped down on the track, exhausted and incoherent. Track and Field is a brutal sport.

There will be no American women competing in the high jump final. Chaunte Lowe didn't even clear a height. My idol, Blanka Vlasic will be there (of course).

Tianna Bartoletta is the only American to qualify for the long jump final. Current Duck Jasmine Todd's jump of 6.52 meters (21.39 feet) was not enough to get her into the elite group of 12 jumpers to move on to the final event. American Brittany Reese also failed to move on. An interesting (to me) side note here: remember England's Katarina Johnson-Thompson - the athlete who fouled on all three long jump attempts during the heptathlon? Guess who had one of the best long jump mark this morning? Yep. We'll see Johnson-Thompson in the final.

There will be no American men in the discus final.

The men's 1500m semi's were loaded with fantastic athletes. Literally any of the entrants could have won their heat. Race organizers ran three heats. The first six in each heat automatically qualified to move on to the next round and the next six racers with the fastest times also qualified - leaving a group of 24. The USA had one entrant in each heat and they all advanced!

Duck alum, Matthew Centrowitz, Jr., raced in the first heat. He ran smart and finished in third place. Leo Manzano finished third in the second heat. Robbie Andrews finished 7th in the last heat, but his heat was so fast 12 of the 14 entrants moved on the the next round. 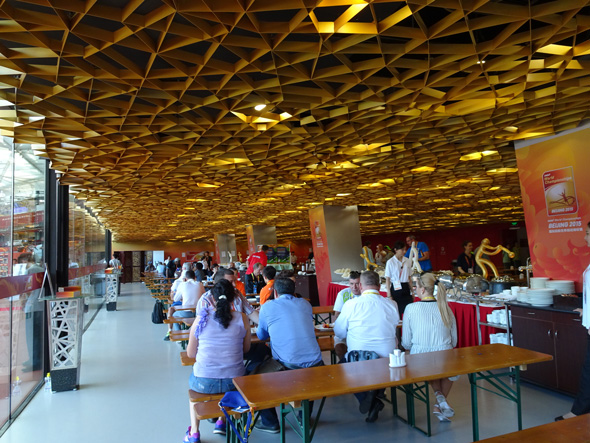 I thought y'all may be interested in seeing the IAAF hospitality area where we go to cool off, grab a bottle of water or a snack between races. Nothing fancy, but always a lot of good food and like-minded folks. The glass wall to the left looks out over the track, so we don't have to miss a second of the action if inside.

No catered lunch for us today. We came back to the hotel, tidied ourselves up and Ubered over to the Tuanjiehu neighborhood for Peking Duck at Da Dong. Chef Dong is world-famous for his crispy-skinned preparation of Beijing's iconic dish. 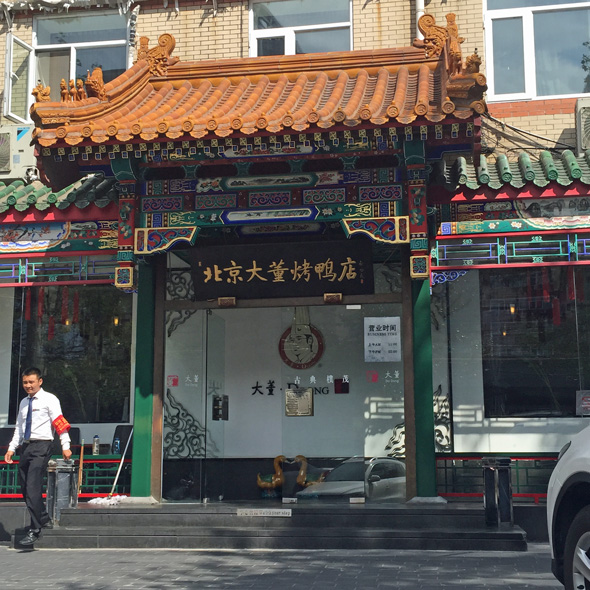 The facade made me think we were entering a very old restaurant, but inside the space is super modern. This place has a reputation for long lines, but early afternoon on a Thursday seemed to be a good time to drop-in. We were seated immediately, ordered two beers and began looking over the huge (lots of items and about two feet tall!) menu. We looked around at other tables to take our cue, but everyone had the same thing on their table - Peking Duck. We jumped in. 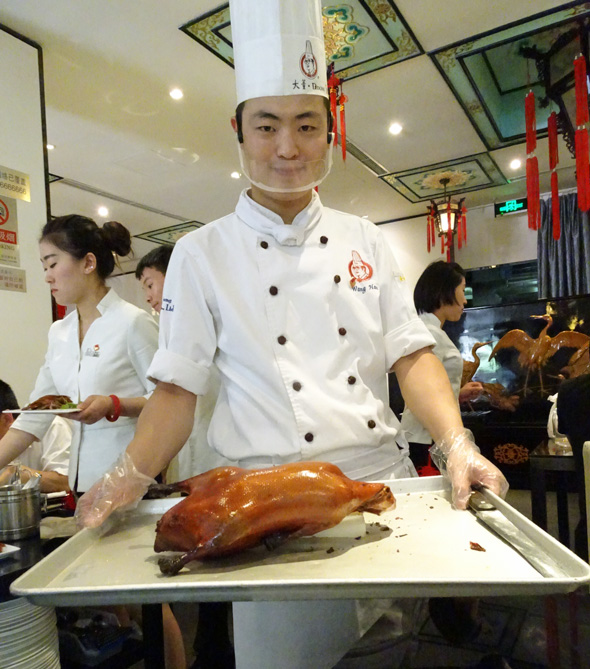 First, a our duck was presented tableside for approval. 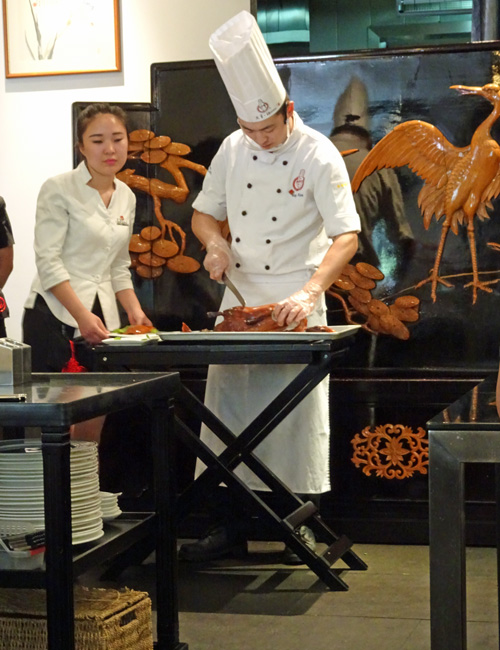 While the our duck is being expertly carved and sliced, we were set-up with plates, chopsticks and a divided dish containing sauces and fresh vegetables - and a steamed basket filled with paper-thin crepe-like pancakes. 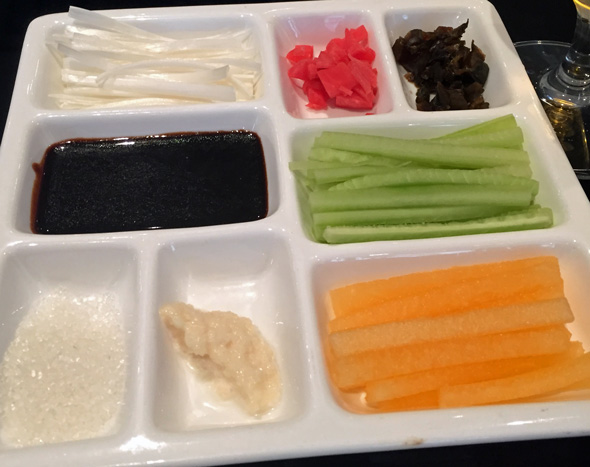 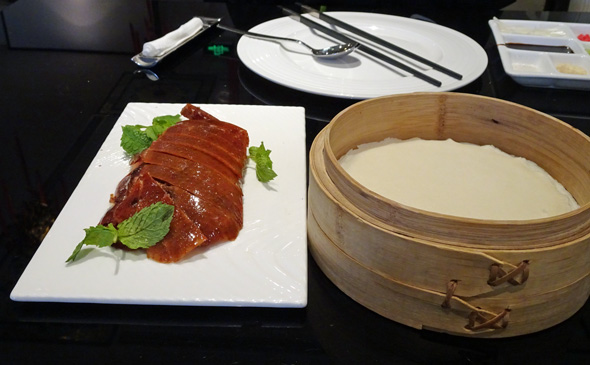 Peking Duck and a basket of steamed thin pancakes

Our duck was delivered, crispy skin up, succulent meat under. We received the entire duck, carved in half and two legs. Eating Peking Duck is like eating a taco or burrito. You stuff a pancake with meat, veggies and a sauce, roll it up and eat. (This Wikipedia article is very informative about the dish.)

And stuff we did. We made many pancakes and stuffed them into our faces. Simply perfect. They also brought us a shallow bowl filled with huge grapes. Under the grapes sat a layer of ice and under the ice must have been a bit of dry ice as the bowl was "smoking". The waiter even brought a little plum sorbet for dessert. (We only ordered the duck, but it seemed every table received grapes and sorbet.) I am so happy we went. With two beers, our lunch was about $50. More than we would usually spend on lunch and probably one of the most expensive places for lunch in Beijing... but I was not going to visit Beijing without eating proper Peking Duck. Mission accomplished. We even had time for a nap before heading back to the stadium for the evening session.

Usually the staff catering the hospitality carves a flower or a bird on watermelons on the buffet table. Tonight they carved the IAAF logo. Very cute. 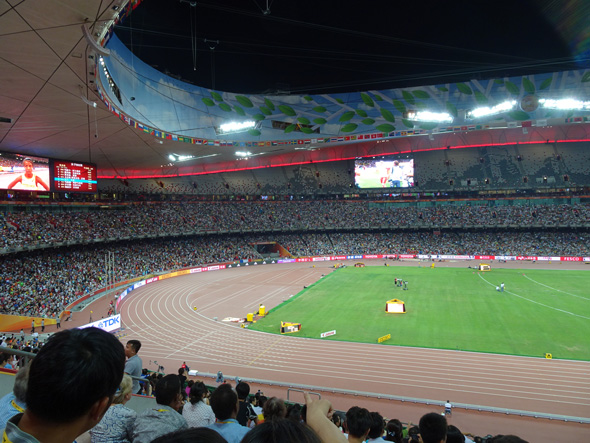 The evening session was loaded with nail-biting competition and the stands were packed with fans anticipating the smack-down between Justin Gatlin and Usain Bolt in the 200m final. Of course, meet organizers saved that race til last.

Aries Merrit and David Oliver qualified in the 100m hurdle semi-final and will represent the USA in the final. Oregon Duck Jonathan Cabral (Canada) did not qualify, but did run a personal best of 13.37.

The men's triple jump final proved much more exciting than the much-anticipated 200m final. (The triple jump is a thrilling hop, skip and jump.) American Christian Taylor made a monster jump on his final attempt, flying 18.21 meters (nearly 60 feet!), the second longest triple in the history of the whole entire world. He went wild and the crowd joined him in the celebration. What a night!

No Americans made it into the women's hammer throw final. The event was won by of Anita Wlodarczyk of Poland, with China's Wenxiu Zhang taking second and Alexandra Tavernier of France third. The local crowd went crazy cheering for Zhang. The Chinese crowd finally began to get more interested in track and field tonight and less interested with the "kiss cam" shown on the monitors.

Speaking of the hammer throw, here are photos of a medal ceremony: 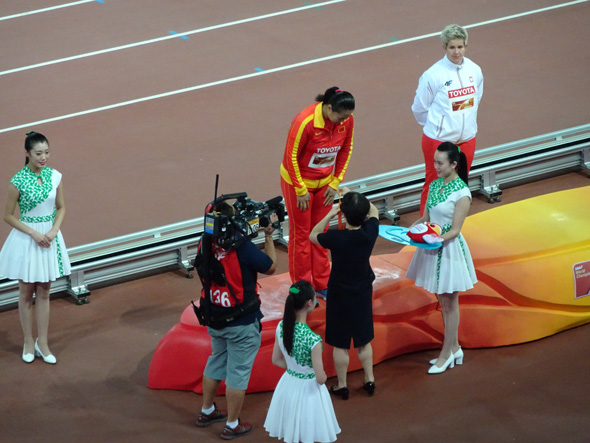 Zhang receives her silver medal from an important Beijing politician 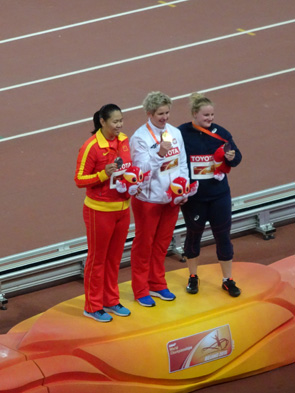 Flags from the winning countries are hoisted up a flag pole. Then, somehow, a breeze magically appears from the top of the flag poles to make the flags flow most properly. The national anthem of the gold medal winner is played. Besides medals, the winners in Beijing receive little mascot pillows.

Two American women qualified in the women's 200m semi-final - Candyce McGrone and Jeneba Tarmoh. University of Oregon senior, Jenna Prandini, racing in Pumas, finished 5th in her heat. After the race, Prandini announced she will leave the University to turn pro. Stay in school, kids.

There will be no Americans in the women's 800m final. 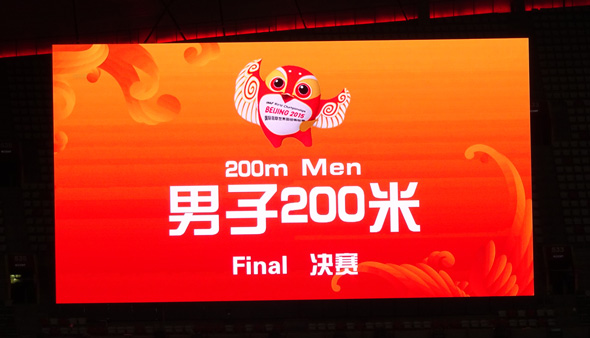 How races are introduced on the video board

The 200m Smack Down was the final event with Usain Bolt beating Justin Gatlin yet again.

Until my next update, I remain, your GO PEKING DUCK correspondent.

Peking Duck scoring: No Ducks in finals for several days, but tonight we picked up two points from Phyllis Francis placing 7th in the 400m final. Her two points brings the Peking Ducks to a total of 14 points. If the University of Oregon were a country, we would rank 14th in the placing table. Take that, Finland!
Official Placing Table

Something I found interesting today: The one-child policy must have been relaxed a bit. We see many families with two children.