Indio, California: The days just seem to drag-on without DT around. (OMG - you know I am kidding, right?) These are the dog-days of Passover. No more Seders, just observing the week by not consuming grains. Lots of salads and lots of running. I typically lose 4-6 pounds over the week... though it finds its way back to my tuchas very quickly.

I manage to keep myself busy, getting many projects completed, running, having fun and needlepointing like crazy. I even finished The Hunger Games - possibly the last person on our planet to do so. Since I am not the "target audience" the writer was aiming for (it was probably written for the kids bored after the Harry Potter and Twilight series ended), and since this is probably the first "fantasy/science fiction" book I have read since The Wizard of Oz, I can't say it was the best book I have ever read, but the character development was very good. Children killing each other on national television for sport is a bit hard to fathom, but in the end I gave it a thumbs-up and have already down-loaded the second book of the trilogy. (I'm a Kindle

Honestly, I can't say DT would enjoy this book. Not at all. I don't even think he would enjoy the film. (Just my opinion and I am not a literary critic.) But can I criticize the weather? The weather has sucked the big one over the past two days. I was so excited for my big planned 6 mile run yesterday. Went to bed early, set my alarm for 7 o'clock. Woke to rain. Rain is so rare here. I thought it would blow-over in a bit, so drank coffee, answered emails, etc., dinked-around until I could see blue sky. Not only did I see blue sky, I saw that all the surrounding mountains were once-again covered in snow! Holy Moley - it's April! The already-closed ski resorts are reopening for the weekend. Just as quickly as the sun appeared, the clouds again covered the sky. But these clouds were black and mean. Lightning. Thunder. Rain. By now it was 10:30a and I decided to take a day of rest. No run for me yesterday. I left the resort only to ship orders at the post office. Captain Jim and Mary invited me to join them for dinner at the club last evening. The restaurant closes at the end of the month and, since they have been in Hawaii all winter, still had a boat-load (ha!) of credits to use-up in the restaurant. Dinner was on them. It was prime rib night at the restaurant, but since I have yet to try prime rib (EVER in my life, it just looks like a huge hunk of bloody meat to me), decided instead on the baked potato/steamed veggie combo and a vat of white wine. Passover-friendly meal. We had such a fun time. Mary & Jim have a million stories and have so many friends! While we were in the restaurant a massive man came in and was seated at the table behind us. By massive, I mean tall. And by tall, I mean 7'-5". Never in my life have I seen a person this tall. Turns out this man was really just a boy - a senior in high school and a bit of a celebrity and certain to be a household name in the very near future. Mamadou Ndiaye (click to read his very interesting tale) was born in Senegal and is attending a small Christian school in Huntington Beach. Amazingly enough, the kid is on the basketball team. Every college coach in the nation is hot on his tail. Ndiaye is here with a high school friend, visiting the friend's grandparents (in their RV) in our resort. (Just wondering what sort of hide-a-bed a motorhome would have to hold a 7'-5" dude. Our RV is only 8 feet wide!) 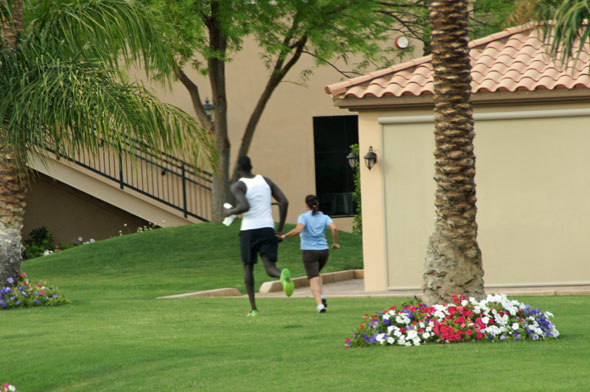 He was wearing NIKE's. Just sayin'.

So the rain has gone away today, but the winds have just been horrid. The only time I left the resort was to run around the block. I am a big girl - and short - but had to fight the wind every step and kept getting sand in my eyes. Terrible work-out. So happy when that was over. Lois came by this afternoon to chat. We were on the lawn and a wind came up so strong, I struggled to get the door of the RV open to get back inside.

1. It's Coachella weekend and I forgot that the music festival starts tomorrow and did not go out to buy groceries/supplies. So many people attend the festival (just a mile behind this resort at the Polo Grounds) that surrounding supermarket shelves are stripped clean. Bare naked. No joke. Remember a few years ago when we went to a nearby market and found only a six-pack of Natty Light in the cooler? The stores cannot keep-up with the demand for ice, beer and bottled water. For the first time, this year the festival will be held over two weekends. Same bands; this weekend and next. About 100 bands on 5 outdoor stages over three days. Most all the bands are "alternative", but the festival usually has one huge headliner. In the past, Madonna and Sir Paul McCartney have finished-off the show on Sunday night. This time they are offering a big headliner every day, but the stars are opening the shows each day. Interesting. Even though Our Girl is in the business, we usually have only heard of one or two of the bands. This year I have heard of SIX artists - Radiohead, Jimmy Cliff, Feist, Dr. Dre, Snoop Dogg and Santigold. I actually have Feist and Santigold music in my iPod. I am so amazingly hip.

2. Matthew Centrowitz, Jr. has a 15-shot pictorial in The Washington Post this morning. I really enjoyed the photos. Remember Matthew was raised in the DC area and his dad is the track coach at American University.

3. We lived for years in Asia, so always crack-up when I hear people say they "can't use chopsticks", when a kazillion people manage to feed themselves with chopsticks every day. (Imagine a Chinese person saying they just "can't use a fork".) After a few days of non-fork living, I think most people would be able to figure it out before starving. However, now they don't have to - someone has invented the chork. (Side note for future Jeopardy answer: chopstick (kwai-tze) translates from Chinese as fast wood. Really.) 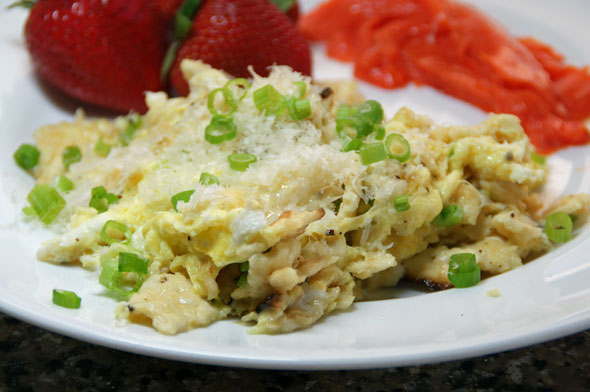 4. I made Matzo Brei. So delicious. We rarely eat Matzo Brei outside of Passover. Today I made it with egg whites, matzo, Parmesan, green onion and plenty of cracked black pepper - and served it with Nova Lox and strawberries. Here is Ruth Reichl's recipe, because I don't use a recipe.

5. New content on RVGoddess.com! Hold on to your hats, because I have NINE more trips to add to this website. These trips are blasts from the past. Today I added a ten-day trip we took in 2002. Ten years ago! Oh, boy, you will be so impressed with the grainy two-mega-pixel photos! Fun to see photos of our P.O.S. Holiday Rambler. Dang, if that RV wasn't an electronics nightmare. If you can't stand to read this boring flash-back, at least go read this crazy boat tale from our nephew.

SLOGGER REPORT:  Gone With The Wind. Four miles of windy running, with plenty of walking thrown-in. Horrid. Note to Self: this resort has a beautiful fitness center.

« Over-Doing It Not a Winner »