Indio, California: Busted! I have been a huge liar for weeks now. Honestly, I didn't know I was a liar, but it turns out I had no idea what was in store for us. We planned a very simple casita and covered pavilion with a kitchenette to be built on our lot in the Motorcoach Country Club, and we are ending up with a 75,000 square foot castle with parking for 40 cars and a heliport.

How did this happen? Simple - at the last minute, I decided to add a little dishwasher. DT was very excited about this decision, as he wanted a full kitchen from the get-go, but is letting me rule-the-roost on the casita decisions. Then, we went to an appliance store to inspect the under-counter oven I had chosen. The oven was ridiculously expensive, and we learned the same oven combined with a four-burner cooktop (in a slip-in configuration) was WAY-CHEAPER THAN ONLY THE OVEN. What? That was an easy decision. Then... since we are ordering a cooktop, it would be a good idea to have an exhaust fan/light of some sort over the burners to protect the overhead cabinets from the flames/heat/steam. Holy Crap. Now we have a range hood!

What's next? Hiring Mario Batali as our private live-in chef?

If I order a trash compactor or a built-in espresso machine, please get in your RV, drive to Indio and rescue me from this hamster wheel. 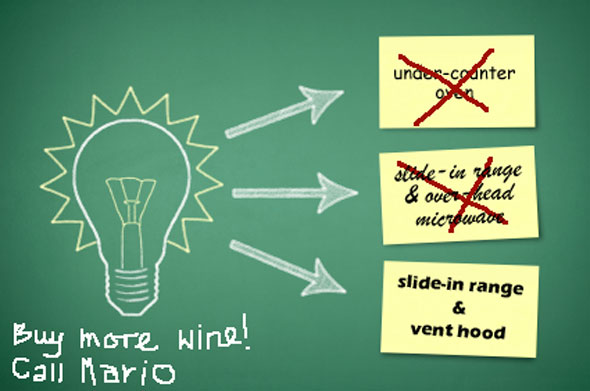 While I was running this morning, I saw our contractor. Arnold had just completed a gorgeous covered pavilion on a RV lot on the other side of the resort. He asked me to stop and have a look. Wowzer. Arnold does such a fantastic job! I can't wait to see what he does on our lot! As I have said before - I am going to let Arnold make a lot of the decisions on our casita - he has such good taste - and such an eye for detail.

DT has flown home/Eugene to attend meetings for the 2012 Olympic Track & Field Trials. He left me with several projects to complete and I have started needlepointing a ring pillow for a certain Bride I know and love. I will keep busy while My Driver is away. 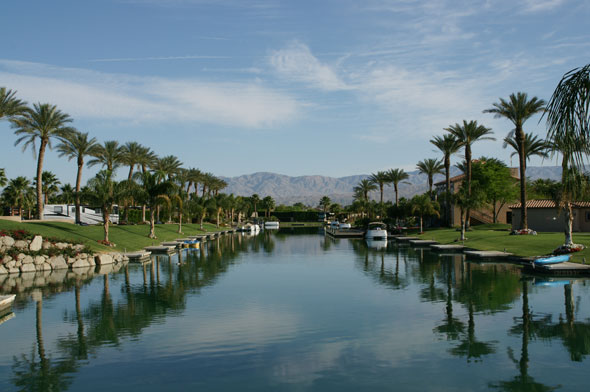 The temperatures have climbed into the 90's this week, but it is supposed to cool down a bit and actually may rain Friday.

Until my next update, I remain, your over-done correspondent.

SLOGGER REPORT:  I ran two miles outside the resort and 1.5 inside. Really hot today so I did not run very fast (who I am kidding... I never run fast) and I had a five minute break while admiring Arnold's latest build-out. 3+ miles.