Glendale, Arizona:  Another warm and sunny day in the Phoenix area. The Lovely Lisa and I started our morning with a four-mile course - we ran and walked, but mostly we walked and talked - and were ready to spend the afternoon in Scottsdale at the BCS FanFest with DT and Lenny. 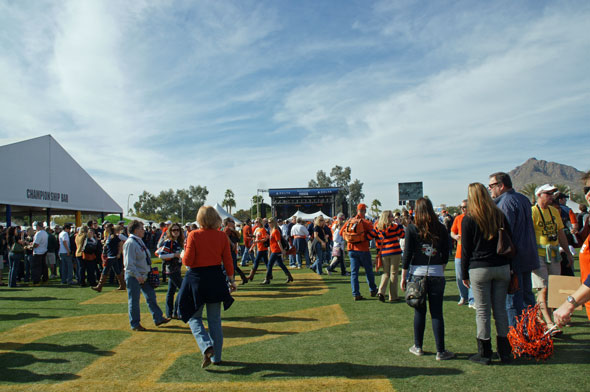 We left the Auburn Tigers to their pep rally and walked to a nearby restaurant (I would call it a bar that serves food), Dos Gringos in Old Town Scottsdale, with 735 of our closest friends to wait-it-out until it was time for the Oregon pep rally. Dos Gringos was completely packed. They ran out of beer. We ordered snacks and they were delivered to our table in only 75 minutes. I think the BCS game has over-whelmed Scottsdale 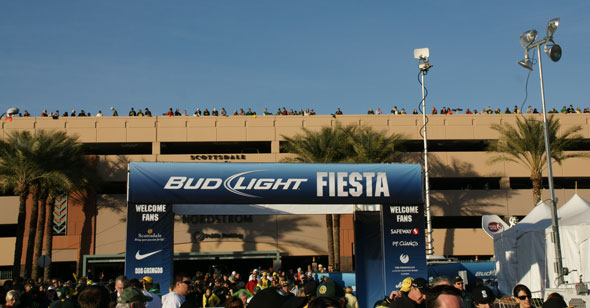 When we returned to the FanFest for the Oregon Pep Rally, things were even more crowded and more confusing. People had moved up to the top level of the next-door parking structure to witness the festivities. 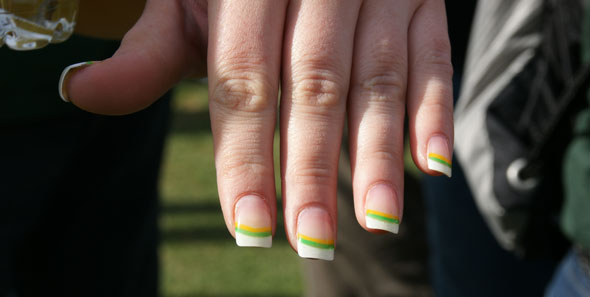 Cory arrived with a special manicure! 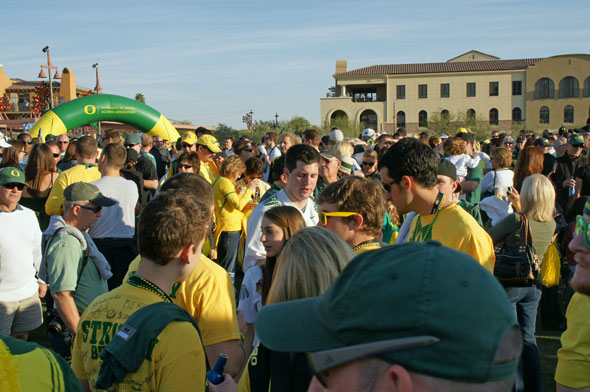 The Oregon pep rally was much more crowded than the Auburn rally, and we like to think we had more fun. We had no nasty signs. We had no nasty chants. We had cheerleaders and The Duck. We had three famous Duck alum sports stars - Joey Harrington, Ahmad Rashad and Peter Jacobsen speak at our rally. We also had that dude from the Jimmy Fallon show (see my post from Thursday), Supwitchugirl and On the Rocks... plus our University President and a quick speech by head football coach, Chip Kelly. 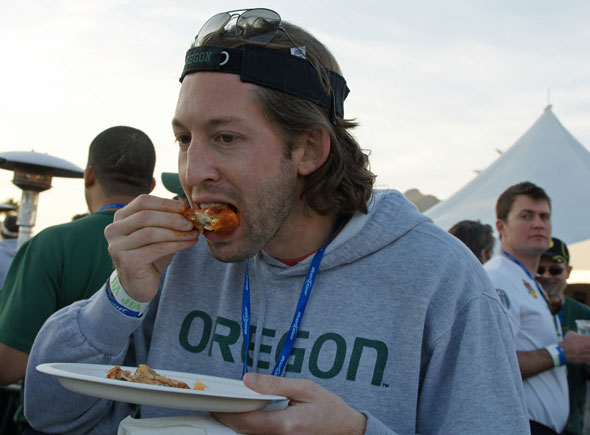 Lenny enjoyed the chicken wings at the rally. 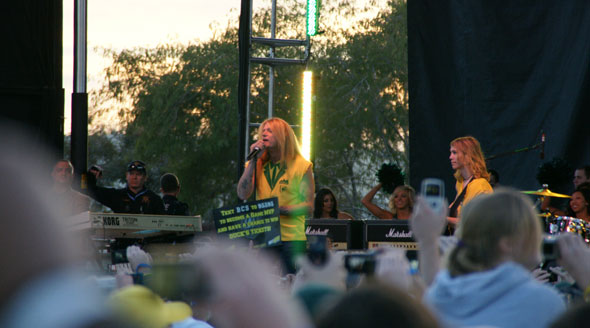 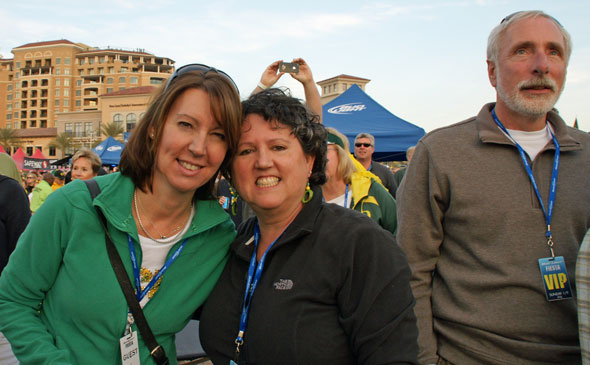 Here I am at the pep rally with my old friend, Tamra... and hey, isn't that Oregon track coach, Vin Lananna, next to me??? 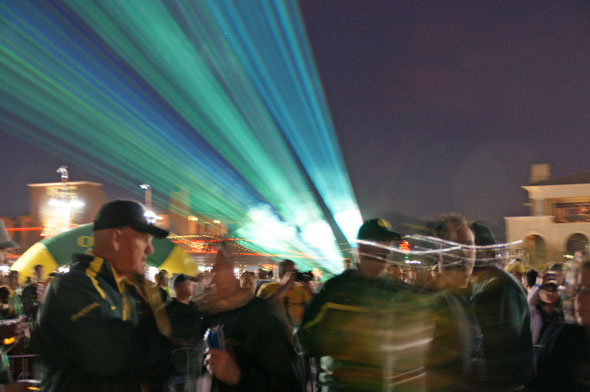 At the end of the rally, it grew dark. There was a little fireworks display and then some sort of laser light show. Suddenly, everyone was looking over to a nearby mountainside. Somehow it had been arranged for the side of the mountain to be filled with lights that flashed either "GO DUCKS" or just a massive "O", or a huge NIKE swoosh. Gotta love that. One thing about Oregon - we are loud, we are proud and we are flashy! We were exhausted... but we arranged to stop at the Camelback Resort to meet with our old friend, Clay Travis, for a quick drink on the way back to our motorhome. (Do y'all remember Clay from our trip to Tennessee last September? We had been planning to go to the Oregon v Tennessee game with Clay and - wouldn't you know it - his wife was due with their second baby the weekend of the game?) Clay is out here covering the BCS game for Fanhouse and wrote his last column about how Auburn is going to crush Oregon.. I have no idea why I am even speaking to him... except we have known him for years and I adore him. 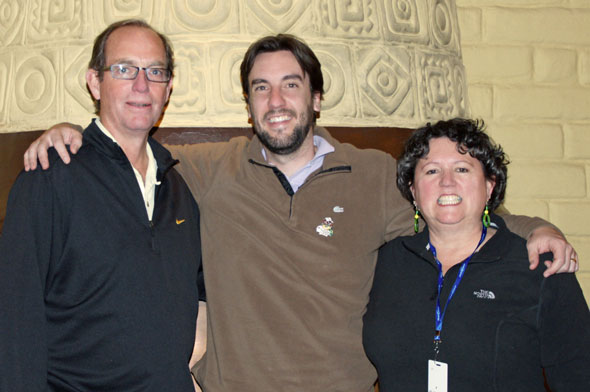 The Lovely Lisa snapped this photo of her old folks with Clay in the hotel lobby. 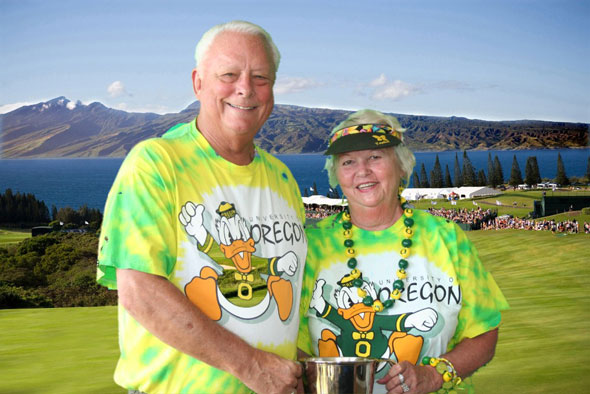 Speaking of Duck fans... Captain Jim & Mary are going to watch the game from their condo in Maui. Today, they attended the Maui Hyundai Champions golf tourney to watch Oregon alum golfer Ben Crain compete. Thanks for sending the photo, Captain Jim! We wish you were here... or do we wish we were there...???

Tomorrow is the Big Game. You all have been faithfully (and patiently) reading this website for months - following all the games and so many of you have truly become Duck Fans! It seems certain the game will be exciting - let's just hope for a fair game and no injuries! The BCS Championship Game will be aired on ESPN at 5:30 pacific/8:30 eastern. I will be in the stadium, but I hope someone will tell me what happens. I am too nervous to watch.

Until my next update, I remain, your GO DUCKS correspondent.
« Friday in Phoenix 19-22 »