Glendale, Arizona:  A very frustrating day, technology-wise. I was on the phone for 30 minutes with MotoSat this morning. Problem not solved. The signal is too weak for the dish on our roof to "talk" to the satellite in the sky. So, I went for a run to clear my head (and arteries). While I was out, DT said the internet locked-on to the satellite and he was able to catch-up on his email. I ran for one hour! Yeah, me!

While the system was up and running, a test could be conducted from an office somewhere in Colorado. Another hour on the phone. According to Jessica Simpson (no, not that Jessica Simpson, but a very well respected satellite internet tech) our dish and modem are working correctly.

Apparently just not all the time. All the support staff from both ends of the service have been so helpful. I think they are also frustrated. I now have a call in to a local tech/repairman. Hopefully he will return my call. But he didn't today. Luckily, my iPhone serves well as a back-up and I am able to post my column easily. Aren't you glad???

Gossip and news continues to swirl around the game. Stubhub had to stop selling BCS Bowl game tickets yesterday, due to such over-whelming demand. The $350 tickets are fetching as much as $15,000. Demand for tickets to the Auburn v Oregon game has surpassed any other sporting event in the history of ticket scalping. Our friends are reporting people asking to buy their tickets from them at airports in Portland, Nashville, Las Vegas and here in Phoenix! Students at the University of Alabama hate Auburn so much they are wearing "ROLL OREGON ROLL" tee shirts. Oregon tee shirts are selling out in Tuscaloosa. What is going on? We see Oregon fans everywhere. We have seen few Auburn fans. Strange too, as Auburn and Oregon received identical ticket allotment.

Woody & Kathy arrived (in their RV) this afternoon. After they settled-in, we all drove over to the official team hotel (a Westin in Scottsdale) to visit the Duck Shop. The Lovely Lisa needed a yellow tee shirt and Lenny wanted "Duck Lips" (noise maker, shaped like a duck bill that produces a duck call sound). 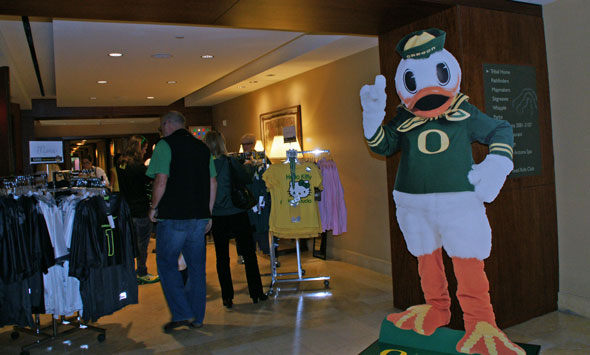 I hope you all notice the adorable Hello Kitty tee shirt - it says Hello Kitty on the top and Hello Ducky on the bottom. Adorable? Yes. Did The Lovely Lisa want this tee shirt? No. Growing up in Southeast Asia, I am not sure Lisa owned anything that was not branded Hello Kitty or Little Twin Stars. How quickly kids grow up these days.

Next, we headed over to the FanFest again to meet up with a group of our friends. 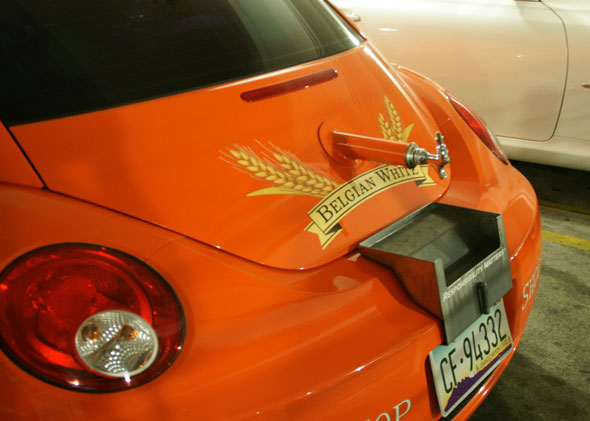 We parked next to this very cool car in the parking garage at the FanFest - it was custom painted to advertise Shock Top Belgian White Beer and it had a tap coming out of the back. I used to think the Magna Peregrinus had a very cool custom paint job, but I now regret not adding a beer tap. 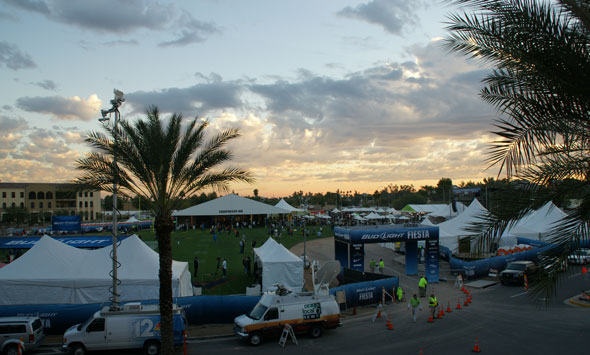 Here is a shot of the FanFest from the adjacent parking structure. There were several celebrity sports people in attendance and even newscasters from the Portland television stations. 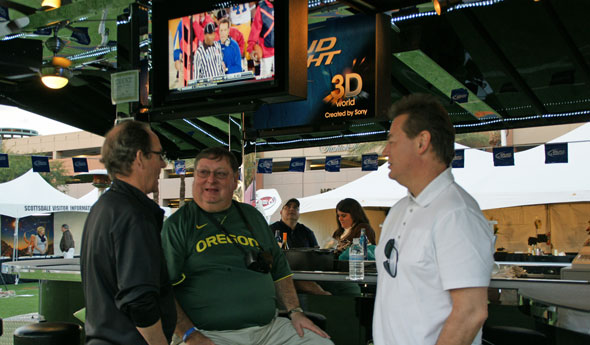 We found Donnie & Roger - our dinner dates from last night - and enjoyed a few cold, frothy adult beverages while listening to live music at the FanFest. Who knew we had so many friends in Phoenix this week! Such fun! Everyone is so excited for the game. Everyone is telling tales of being offered thousands of dollars for their tickets. 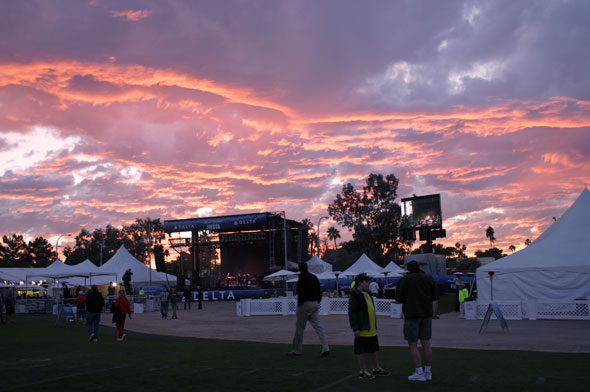 Look at the beautiful sunset! 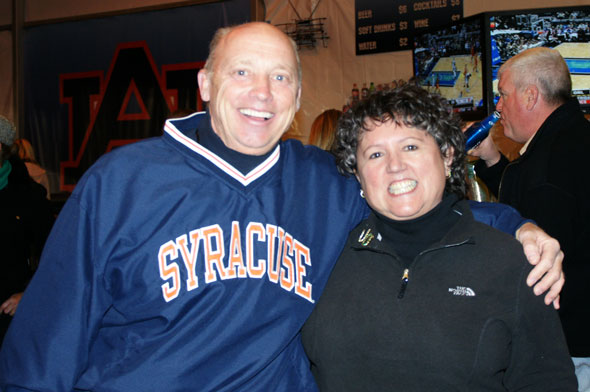 One of My Dear Readers, the handsome Peter L., of Vermont, saw us at the FanFest and came over to say hello. Peter is on a three-month RV trip - avoiding the Vermont winter and playing golf across the Southwest. He will attend the game Monday night with his son. Such fun to meet Peter and so happy that we have turned him into a huge Duck fan. GO DUCKS!

As things were winding down, we went back to our RV's - stopping for delicious Mexican food on the way.

This is a cheese enchilada and a chile rellano with rice & beans.

And here we have green chile chicken enchiladas. Great food at unbelievably low prices - less than $9 per person, with tip!

It has been a long day. Too much running and too many phone calls with tech support. Tomorrow The Lovely Lisa & Lenny arrive! Until my next update, I remain, your Scottsdale correspondent.
« Too Much Information Oregon Pep Rally »