Las Vegas, Nevada:  We had a quiet morning. Dave worked out on a bicycle in the hotel fitness center, we had coffees and then walked over to the new T-Mobile Arena to watch the Oregon Ducks v. Arizona State. 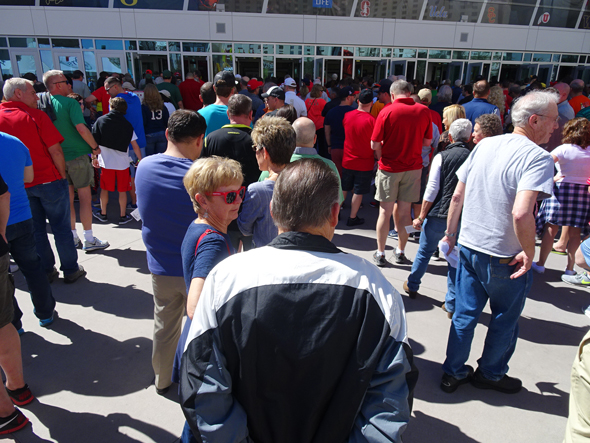 Entry lines were very long. We had to go through a purse-search and pass through a metal detector to enter the arena. Once inside, we were really impressed with the huge stadium! So neat and tidy - so roomy. Massive escalators carrying spectators up three levels. Our seats were in an area with access to a private bar and restaurant area. No matter this is a NCAA event. The tournament is in Las Vegas. Not only can you bet on a game at the casinos, you can have a cocktail in your stadium seat. (BTW: I do not bet on college sports... but I do drink cocktails.) 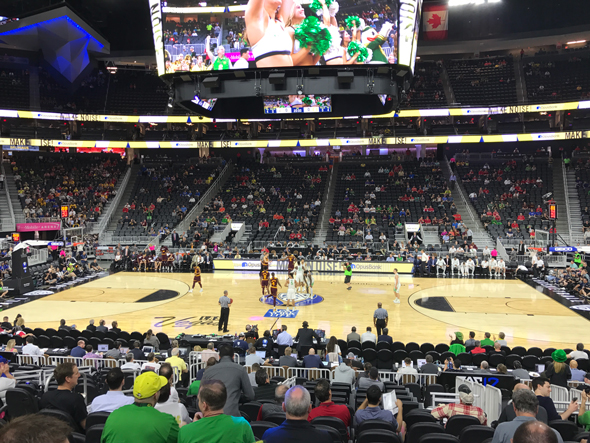 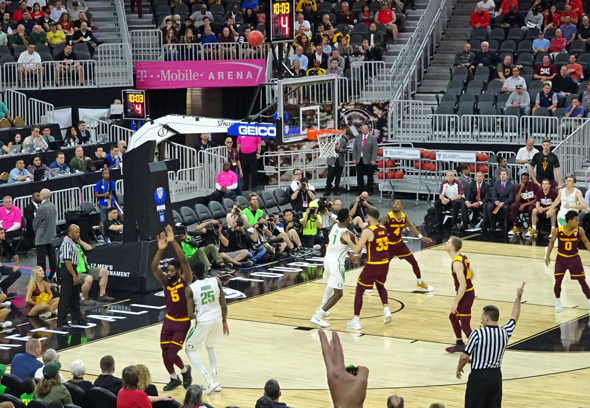 The game was very close throughout the first half, but after the break, the Ducks pulled away and never looked back. 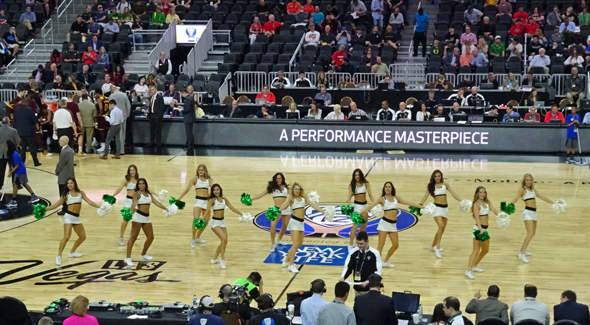 The Ducks won the game, 80-57. Before the next game, Cal v Utah, we went up to the bar for a drink. After waiting forever in line, I ordered a vodka soda. The bartender asked if I would like to make it a double. Considering how long the lines were, I agreed. 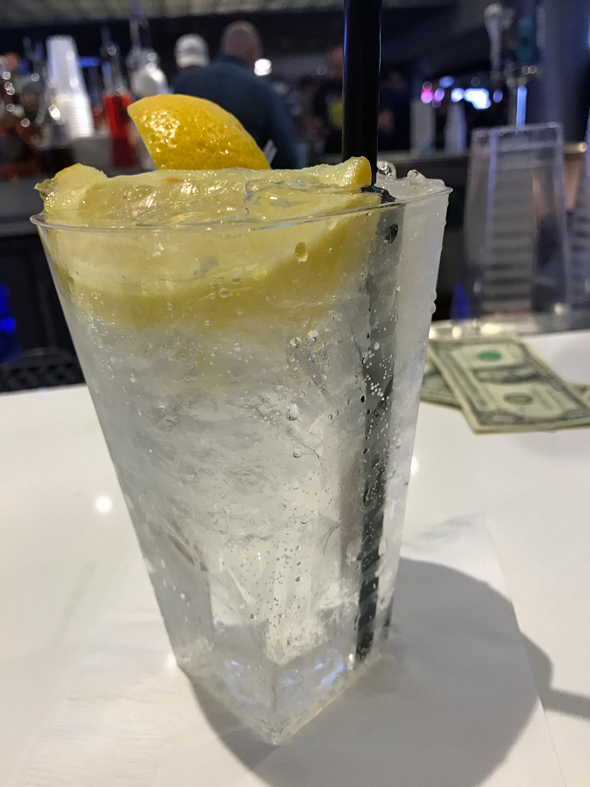 Please enjoy this photo of my $32 vodka soda. 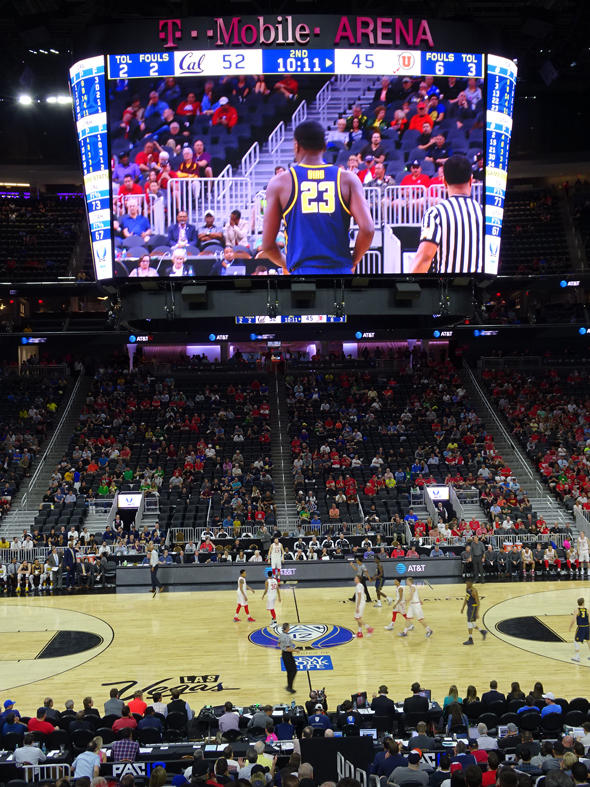 The screen above the court is so large, and the picture so clear, it is distracting! Beautiful arena.

Between the (two, two-game) sessions, Dave and I walked back to our hotel room so he could ice his knee again. Though very close to the arena, it is a half-mile walk from our hotel room to the arena. On a normal day, this would be nothing for us. We average six-to-seven miles a day walking in Las Vegas. Everything is so huge here. It can be a quarter-mile walk from a hotel lobby to a hotel room! But since My Driver had his meniscus repaired (two weeks ago today), he is using a cane for support and must ice his knee often. We are trying to walk as little as possible... which is, honestly, impossible to do in Las Vegas.

Before heading back to the last two games, we stopped in the hotel lobby and split a burger at the Burger Lounge. 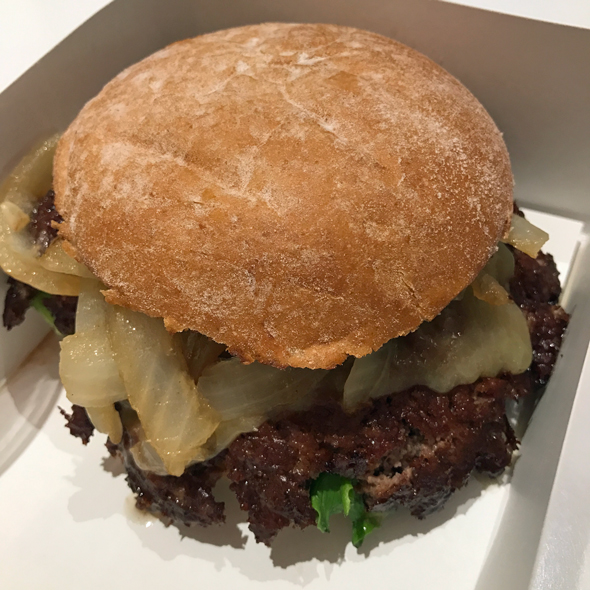 Bill Walton was the television announcer for the last two games this evening. We saw him seated in front of us, court-side, in a most peculiar situation: 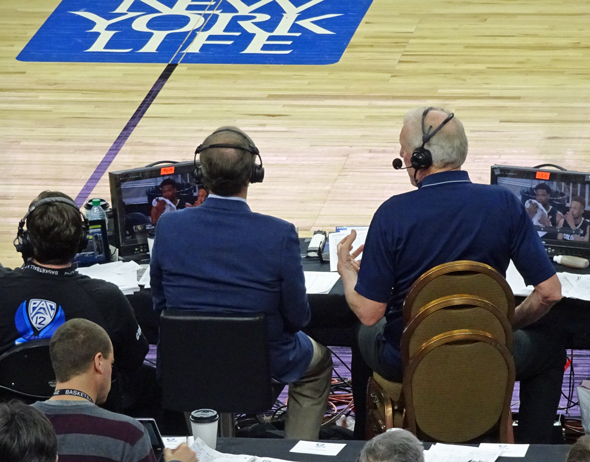 Three chairs stacked together to give the Big Guy the height he needed - most likely to aid his always-ailing back. 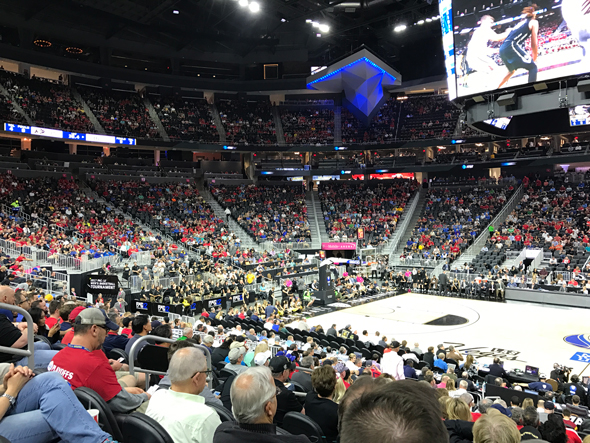 The University of Arizona really represented at their game v Colorado this evening. The arena was about 70% filled with red-shirted Wildcat fans. Arizona fans are quite vocal and had a great variety of organized chants and cheers to root their team to victory... which they did this evening, 92-78. Dave and I are great fans of the Arizona coach, Sean Miller. While Lisa was in college at The George Washington University, Miller coached at their rival, Xavier. We used to watch him brilliantly coach the X-Men to victory after victory and were not surprised when he was chosen to coach the mighty Arizona Wildcats. We love Sean Miller - unless he is coaching against the Ducks.

The final game was USC v UCLA and this game was on ESPN. We left around the half, and finished watching the game on television at our hotel. UCLA beat USC, 76-74.

Y'all know I love My Ducks. I'm pretty opinionated - especially when it comes to the members of the track team. The Ducks win games. The Ducks lose games. But one thing the Ducks will never lose is a mascot contest in the Pac-12 (or possibly the entire NCAA). The Conference of Champions should be embarrassed. 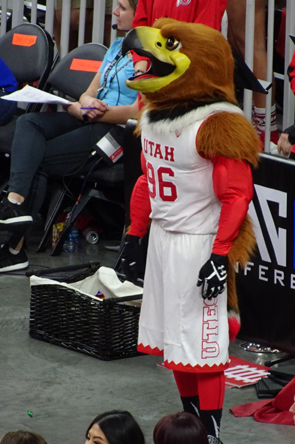 Oski, the Cal Bear and the Utah Utes mascot, Swoop. 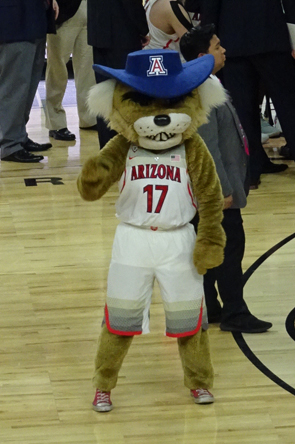 The University of Colorado are the Buffaloes. Ralphie (left) is their Buffalo... even though he is, of course, actually a bison. The University of Arizona Wildcats have a wildcat as their mascot. His name is Wilbur. Wilbur is married to Wilma, a female wildcat mascot.

NOTE: A CU reader corrected me - see comments below. Ralphie is the name of the (real, live) bison who attends the football games. The mascot pictured above is named Chip. 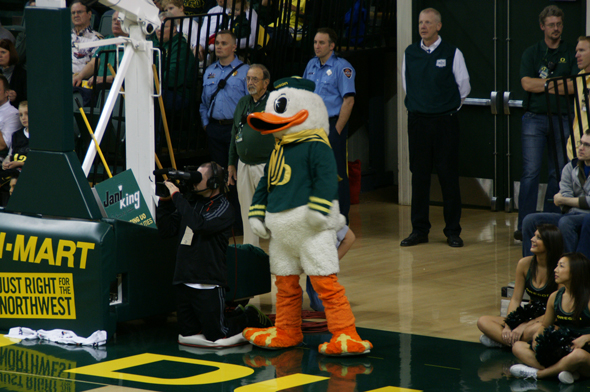 Compared to The Duck, the other mascots are amateurish. I know we have Disney on our side, but honestly... step it up, Pac-12! The Duck is unofficially recognized as Puddles.
(NOTE: The above photo was taken - by me - in Eugene in 2009.)

Until my next update, I remain, your sleepy correspondent.