Las Vegas, Nevada:  Another quiet morning. Thankfully. Dave returned from the hotel fitness center (stationary bike) reporting Duck hurdler, Devon Allen, was also working out in the gym. Allen was the NCAA 110m hurdle champion, USA national champion, placed 5th in the Olympic high hurdle final in Rio, and (in his spare time) was a wide receiver on the Duck football team. Devon had a devastating ACL injury last football season and has decided to focus his athletic talents on the hurdles. (GOOD DECISION!) Graduating in June, Allen signed with NIKE last week. He promised Dave to be fit and ready for the World Track & Field Championships in London this August. Love me some runners hurdlers!

The basketball games didn't begin until 6p, so... with an entire free day... what else is there to do in Las Vegas? Shop! Though a bit short after my $32 cocktail - window shopping is still free. We took a taxi to the Forum Shops at Caesar's Palace, had a nice Italian lunch and walked and shopped as much as Dave's knee would allow. We took a taxi back to our hotel. This taxi use is just a temporary situation. Normally, we walk everywhere in Las Vegas. Dave will be back to his normal form in short time. 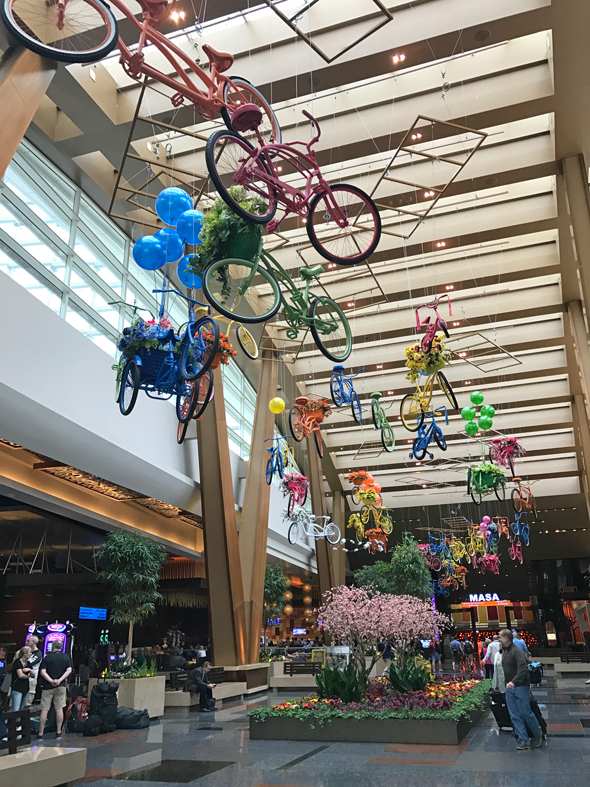 Though just-not-quite the lobby at the Bellagio, the lobby in the Aria has an interesting display of colorful bicycles and flowers suspended from the ceiling.

We headed over to the arena at 5p to meet Mary's sorority sister, Jill, and her husband, Blake. Even though Blake is a Bruin, we still like him. They live in San Diego. 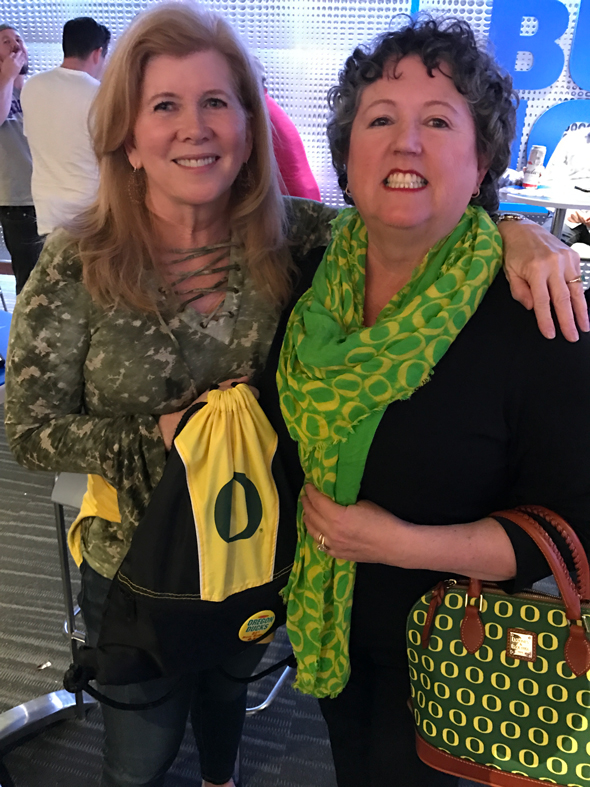 NOTE TO READERS: Fashion sense makes no sense in Las Vegas. It was reported, by a fellow elevator passenger, a male guest was spotted - asleep - in the hall of the 4th floor early in the morning, wearing only underwear and shoes. How many times must I suggest people are staying in hotel rooms without mirrors? How the heck else would they be walking around Las Vegas dressed like they were about to weed their garden... without the benefit of foundation garments? 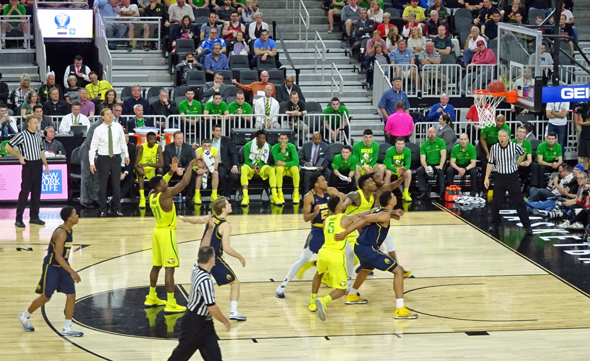 I did not expect the Cal Bears to give the Ducks quite so much trouble, but it was a very close game until the last bit. Of course, as with any Pac-12 game, there were a few questionable ref calls on both sides. The final score was 74-65.

We all stayed to watch the UCLA v Arizona game, but it never was much of a game. Arizona was on fire, putting up three-pointers like it was their job... and UCLA could only return with a 2-point answer. UCLA just could not defend, so the Wildcats were in control the entire game.

At half time, the above mentioned Devon Allen was recognized - along with an Olympic athlete from each Pac-12 school - on center court. 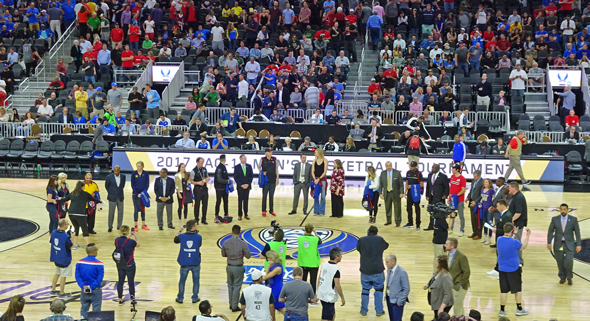 I can't rationalize how each school chose but one athlete. Many school honored an athlete from the 2016 Rio games. Oregon State honored Dick Fosbury (below, with orange shoes), the famed high jumper from the Mexico City Olympics in 1968. 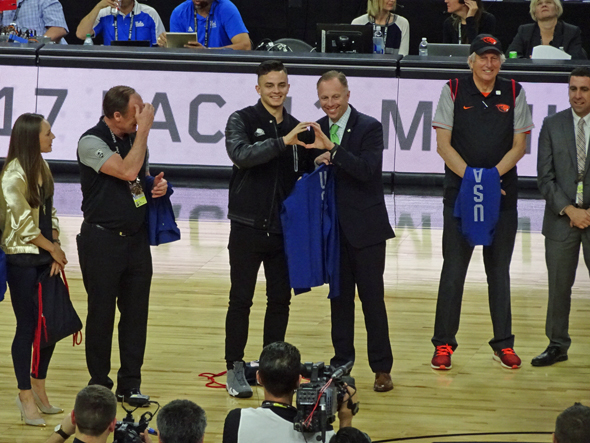 No idea how the Ducks settled on only Devon Allen. There were 11 Ducks in track and field alone at the Rio Olympics.

According to Bill Walton, the Pac-12 are the Conference of Champions.

The second half of the game was hard to take. UCLA could not answer Arizona. Just after writing yesterday that I loved Sean Miller (except when he is coaching against the Ducks)... wouldn't ya know it?

Ducks v Wildcats for the conference title tomorrow night. It is on TV. ESPN. 8p pacific.

We went for a very late dinner, with Jill and Blake, to Javier's in the Aria after the game. The restaurant features a very large and very unique wooden art installation - a Day of the Dead interpretation carved with a chainsaw by an artist from Sisters, Oregon.

This is one of the most ornate and unique piece of art I have seen. It is amazing and occupies one entire wall in the restaurant.

Speaking of chainsaws, I hope the boys from Oregon carve a little history on the Arizona Wildcats tomorrow night. It will certainly be an epic battle.

Until my next update, I remain, your optimistic correspondent.