On The Road Again

Eugene, Oregon: After the most boring, sickest (me, for six weeks), summer ever, complete with major house-purging and reorganizing, after only one summer vacation (cruise to Alaska with the kids), we are finally in our beautiful motorhome again and she is pointed south towards sun, fun, family, and friends.

The master bath in our house has been cleared of everything and anything except light bulbs. The contractor will begin right-away with demolishing the ancient two-by-two-inch blue tile. So long. Goodbye. Sadly, the tile still looks as good as the day we moved into the house in 1994. It is just blue, and so out of style/date. If we keep the house two more minutes, no doubt blue tile would make a major design come-back... like our brass door hardware... but, it's not going to happen.

We are remodeling the master bath in boring beige natural-colored stone and tile.

We arrived to the Magna Peregrinus (in her storage facility) just after noon today, having taking only two trips previously to pack the bus for a winter away. We loaded the bus with our last-minute belongings and the remainder of our refrigerator, and prepared to hit the road.

That was until we heard a big crash as the living room slide room extended. THUNK. 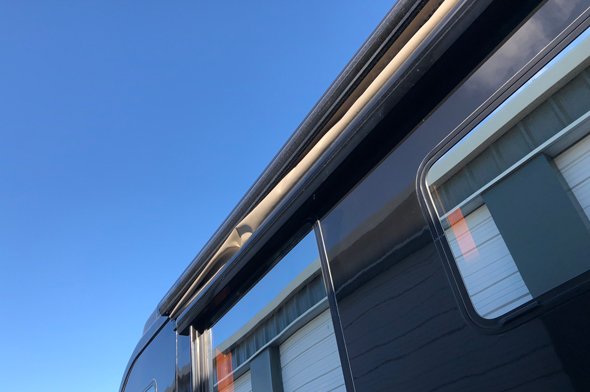 After placing our belongings in their designated spaces, the awning cover over the living room slide did not retract as it should. We tried several times to retract the awning cover, with Dave giving the awning a bit of "help" with an extended window-washing wand. So we traveled to Eugene (two hours south on I-5) with this (photo above) awning situation... because we are classy like that... 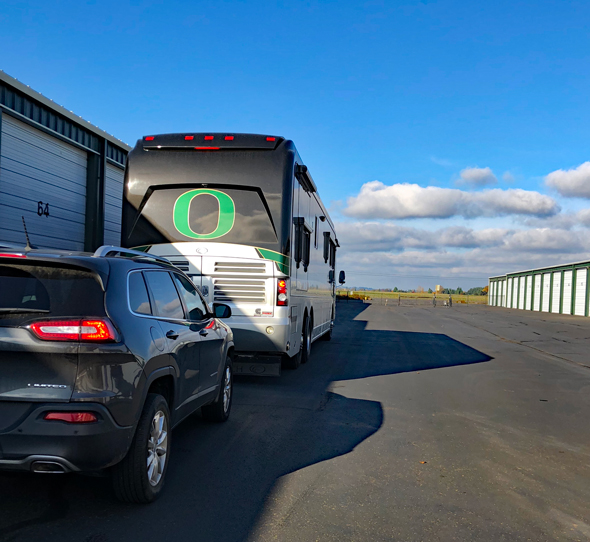 We decided to leave anyway. Between our tech, Brian, and Cummins Coach Care (where we had an appointment for a lube, oil, filter on our 650hp diesel engine tomorrow morning) someone could certainly figure-out how to get this dang canvas rolled-up into the awning cover?

Someone, not us-one... mostly because we do not have a ladder tall enough to even peer into this situation. (Brian sent a text saying the awning cover needed a little tightening, a little lubrication, and should be a quick fix.)

Meanwhile, there is a lot of text-messaging happening between my phone and our already-arrived-for-the-winter friends at the Motorcoach Country Club in Indio. 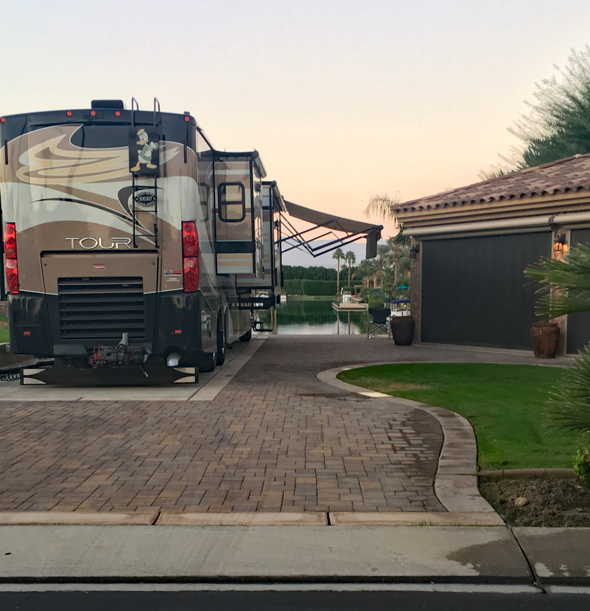 A bus is squatting on your campsite!?!?

Nah, it is only fellow Ducks and good friends, Captain Jim and Mary. They arrived to MCC only to find their contractor a bit behind with their casita build-out, so DT suggested (when he saw them at the UCLA game last weekend in Eugene) they crash at our pad. Wonderful to be able to help-out our great friends. They kinda class-up the joint, don't ya think?

Mary sent the most beautiful photo, showing us what we are missing: 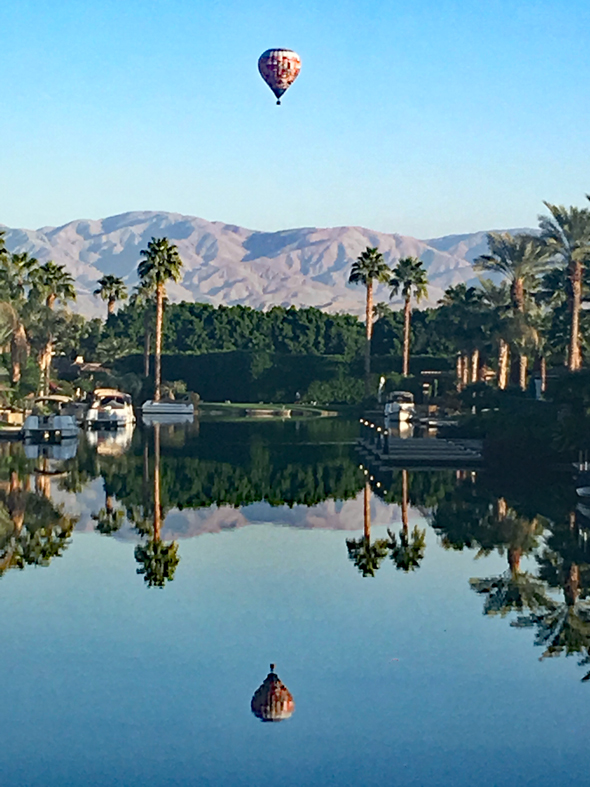 I swear, this is the best view in the Motorcoach Country Club.

After arriving to Eugene, setting-up camp, bumping the satellite television signal (after not using it at all this summer), setting the radiant-heat floor tiles to "INFERNO" for a 30-ish-degree night in Eugene, and reacquainting ourselves with our RV, we met Elizabeth and Vin for dinner at Marché.

This past spring, Elizabeth told me a story of their eldest grandchild, Brian, telling her he always wanted to spend the 4th of July at their family vacation home on Cape Cod, because he loved watching the fireworks over the water. The next day, I saw this needlepoint canvas: 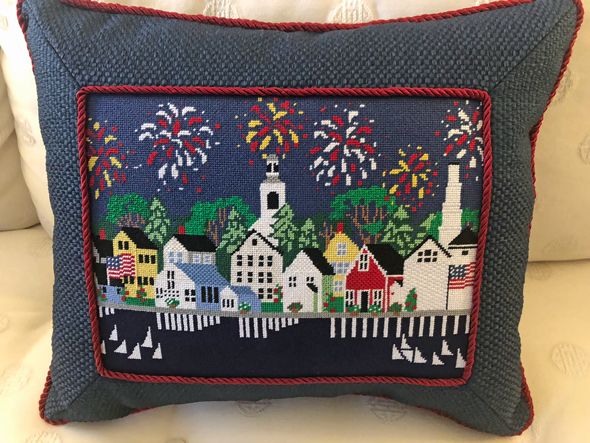 There was no way to pass it by. The sentiment was perfect. Fireworks and a New England village on the water. I needlepointed the canvas in silk, making different decorative stitches on each building and roof. Elizabeth and Vin loved the pillow, and I hope Little Brian will rest his head on it many years while watching fireworks over the sea outside their beach house. My finisher turned the canvas into a beautiful pillow, and it was delivered to me last week. Perfect timing - twice - on this pillow.

Until my next update, I remain, your traveling correspondent.