Canyonville, Oregon: Oh Dear Reader, it was very early this morning that we were up and getting organized to have the Magna Peregrinus across the interstate to Cummins for her annual engine servicing at 8a. It's not that difficult, of course, but then we have to occupy ourselves from 8-noon. Over the years, we have developed a bit of a routine, so stuck with our usual morning-stretching plan. 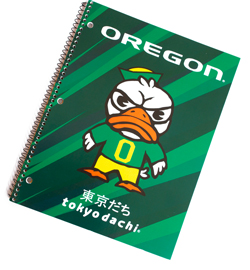 First stop: breakfast at the Glenwood Cafe in the University of Oregon neighborhood. This cozy spot has massive breakfasts at student-friendly prices, and gave us energy for our next few stops, including a one-block walk to the massive University of Oregon Bookstore, where we found Tokyodachi Duck junk for Leo, and a cute little (normal, old-school) Fighting Duck tee shirt for his sister. This brand (I think a play-on-words in Japanese) have created mascot caricatures for most American colleges and universities. I completely do not understand the concept, but since Leo spent ten days in Tokyo this summer, maybe he will appreciate his new notebook and maybe he will be able to explain the Tokyodachi craze to his old Bubbe?

The Tokyodachi Duck looks so mean and so unhappy. Why?

The next item on our checklist was to see what we could see as the University of Oregon builds a new track and field stadium, to be completed just in time to host the IAAF World Track & Field Championships in the summer of 2021. All we could see today was a big fence surrounding the footprint, and a lot of cranes and a lot of massive cement-and-rebar posts rising from the sacred grounds. I'm so excited. With fabulous modern basketball, volleyball, soccer, softball, lacrosse and baseball venues - not to mention football facilities that rival most NFL teams - it is about time the sport with the most NCAA Champions at the University of Oregon gets a modern arena. GO DUCKS!

Not getting enough excitement at the campus Duck Shop (and with several hours still left to kill), we went to the fan shop at the football stadium. As we left our car to walk to the store, we could hear the roar of a crowd! Like thousands of people were in the adjacent football field, Autzen Stadium, cheering for their team. What the heck? Turns out the football team (shouldn't they be in class at 10a on a Thursday?) were training at the indoor practice facility, and every time they took a snap, crowd noise roared from a speaker system, so as to completely re-create the noise level the boys would hear during a game. As I am sure this sound-blasting isn't something new (just new to me), so am not giving-away a Duck training secret, this informtion is shared on this blog. I found it fascinating and very clever. But... just in case... there was a man at the open (garage-style) door to the practice facility, urging us to run-along - nothing to see here - and not linger, and definitely not watch, nor snap a photo. We found cute Duck cocktail napkins, and the always-inspiring Herb Yamanaka in the Duck Shop. A lucky day!

We were back to Cummins before noon. Our coach was nearly finished. The annual servicing went well, with no issues found. However, we learned the massive spring in the awning cover over our driver-side slide room had broken. Ten years of countless in-and-outings, and it just snapped. Piece of junk! Cummins did not have the replacement part in stock.

We had been in communication with or tech, Brian, all morning via text messages, telling him we could live with a bit of awning flapping in the breeze as we continued to Indio, and could certainly find a roving repairman in our RV resort to do the job. Brian was having NOTHING to do with this. What if someone saw us driving down the interstate with exposed awning canvas? Not on Brian's watch! (I think the term he used was: unacceptable.) We were instructed to high-tail-it, as soon as our engine service was complete, to his shop, Premier RV Services, in Junction City (about 20 miles west). The spring would be replaced - and he had the part in stock! Did I mention I adore Brian? Oh, yes. I have. About a zillion times.

Brian was off-site this afternoon, and had arranged for another tech to do the job. One hour later, we were on the road... except Brian returned to Premier RV just as we exited the parking lot. Brian jumped out of his vehicle, DT pulled-over to the side of the road, Brian ran across the road to our bus, opened the door, came inside, gave me a big hug, and departed just as quickly. Thank you, Brian!

Our drive south lasted only two additional hours. It gets dark so dang early now, and we needed fuel, so here we are again at Seven Feathers RV Resort, exit 99 on I-5. One of the best parks in America, we usually stay here anytime we traverse north-south on I-5. The campground has absolutely everything anyone could possible expect in a fancy RV resort, and if you need more - across the freeway (but far enough away there is no traffic noise) you will find the Seven Feathers Casino - complete with gaming, restaurants, hotel, convention facilities, bars, a spa, and entertainment/concerts galore. A free shuttle is always cruising through the campground to carry you to the casino. And don't forget the truck stop for all your RV fueling needs. 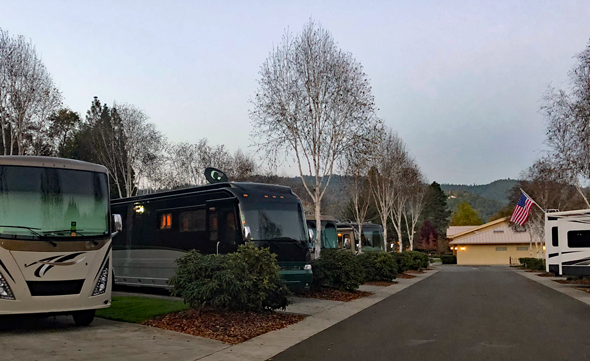 The Magna Peregrinus, with her pretty "O" satellite TV dish 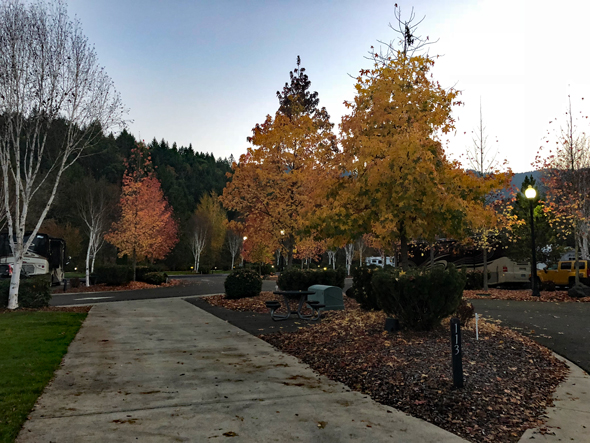 The last of the fall color in southern Oregon

Oh, wait! About ten miles north of Seven Feathers, our rear-view camera decided to stop working. Hopefully restarting the RV tomorrow - or hitting a big bump - will restore the service as we continue south.

And I did serve our traditional lasagna - first night on the road meal - for dinner tonight.

Until my next update, I remain, your lubed, oiled, and filtered correspondent.

« On The Road Again Smoked-Out »