Merced, California:  We have stayed in the tour bus/trucker area at Thunder Valley Casino (Lincoln, California - east of Sacramento) several times prior to this week. The first time, we went to the Security Desk and they gave us a flyer for our front window, alerting the security officers patrolling the parking lots we were legit. The next time we stayed here, we went to the Security Desk for our window sign and they shooed us away, stating they no longer required visitors to register. (I'm surprised the parking lot hasn't turned into a huge homeless camp.) This time, we did not even attempt to register, but a security guard finally stopped this morning and knocked on our door. Noticing us over the past several days, maybe he thought we were going to take up permanent residence in the parking lot? DT told the agent we were on our way out in a few minutes. The officer said we now need to register with Security for a stay over 24 hours.

Would it really be asking too much for Thunder Valley to possibly post an informational sign in their big-rig parking lot? (Or - I'm dreaming - how about following the lead of most of so many other casinos and install a full-service RV park?)

We tidied, put belongings away, brought-in the slide rooms and attached the Jeep to the back of the RV. I put the Jeep through the usual (but complicated to me... I still need to read step-by-step instructions... Every. Single. Time.) towing procedure. Not only does this procedure entail completely disengaging the transmission via a button, it then requires putting the disengaged transmission in PARK - totally freaking me out. Every. Single. Time. Then we do the safety check (turn signals, brake lights) and DT ever-so-slowly pulls the motorhome forward. The tow bar locks and the car begins to roll - a double-check to me that the transmission is not engaged and all is well. Except for today.

Today when the bus moved forward, the car took a deep downward-forward dip. The tires did not go around. Dave stopped immediately (he actually watches in the side mirror to see if I scream!) and I went back into the car to see what was wrong.

The transmission was not engaged. Everything looked normal... until I noticed the electronic parking brake (a pull-up-lever on the console) was set. What? DT swore he did not set the parking brake. I had not set the parking brake. (I needed the parking brake a few weeks ago in Emma's driveway and seriously had to look around the car to even remember where it was located!) Not only was the emergency brake ON, it would NOT GO OFF. I reversed the towing procedure (only about a 6-step procedure!), then started the car. The parking brake would not disengage. I stopped the engine. Restarted. The parking brake would not disengage. I decided the brake was stuck due to being dragged three inches? I started the car, put the car in reverse and drive, let my foot off the brake pedal each time. The car moved a bit and I was finally able to disengage the brake. (This may have just been a fluke. I know NOTHING about cars or brakes or obviously pretty-much anything.)

So, I started from scratch. Went through the entire towing procedure again. Dave came over to help/watch me, opening the passenger door of the car. Dang if the brake mysteriously set itself again. Something was wrong. I was going to have to drive the Jeep two hours south to Merced, following My Driver.

Not so fast. I did a little Googling. Seems the Jeep has a feature (many cars have this now), that if a door is opened, the parking brake will engage. Why? Not sure. It seems so unsafe! (This emergency-brake-setting-itself thang is a huge problem - especially in attendant-driven cars in drive-through car washes. The cars lock-up on the car wash tracks.) I had kept the driver door open while performing the initial procedure. (It was really warm today.) Dave had opened the passenger door while I was going through the later towing procedure. Holy Crap, People - do not open a door while putting a Jeep through the towing procedure - and ALWAYS double check the parking brake is OFF.

(PS: There is an optional feature available on my Jeep that the parking brake automatically is set when the car is turned off. This feature is set to OFF on our car. I am also going to disable the parking sense feature that tells me that I am about to back into something or bump into something while parking. Luckily this feature is just an easy button on the dash.)

Why is everything SO COMPLICATED???

All of this - setting, unsetting, getting the brake to disengage, doing it all again, Googling, starting over - took nearly an hour.

That said, except for My Beloved Chevy Suburban, this little Jeep Cherokee is the nicest car I have ever owned.

We finally left Lincoln, worrying (and I'm not going to lie, stopping one more time to double-check the parking brake was not mysteriously engaged). OCD much? How odd that we have had this car for over a year and we have never had a door open during the towing procedure? I am very curious about this situation and not 100% satisfied.

Our luck did not improve. Electronic reader boards began to appear on I-80 stating Highway 99 was CLOSED around Modesto. North and South-bound lanes. A fuel tanker had crashed and spilled 8000 gallons of diesel and gasoline on Highway 99. (No injuries. No fire.) The highway was closed and traffic was snarled for 14 hours. (Highway 99 is just west of, and parallels I-5). Our GPS took us out into beautiful farmland, along roads that normally handle a few hundred cars a day, but were clogged with thousands this afternoon. It was terrible. Terrible.

We didn't arrive into Merced until 4p, doubling our usual drive-time between Sacramento and Merced. We quickly set up camp and put the television satellite dish up to catch the Oregon v USC game live from Los Angeles. 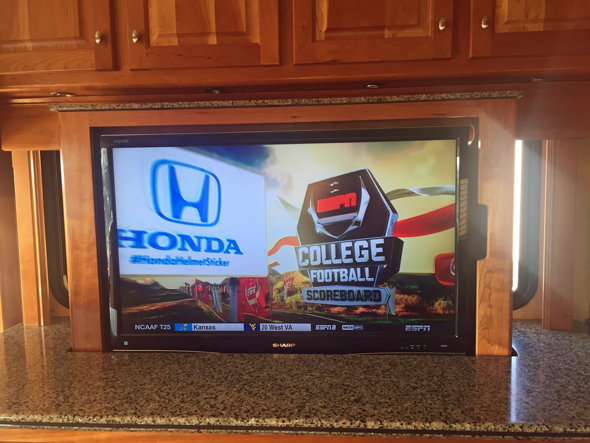 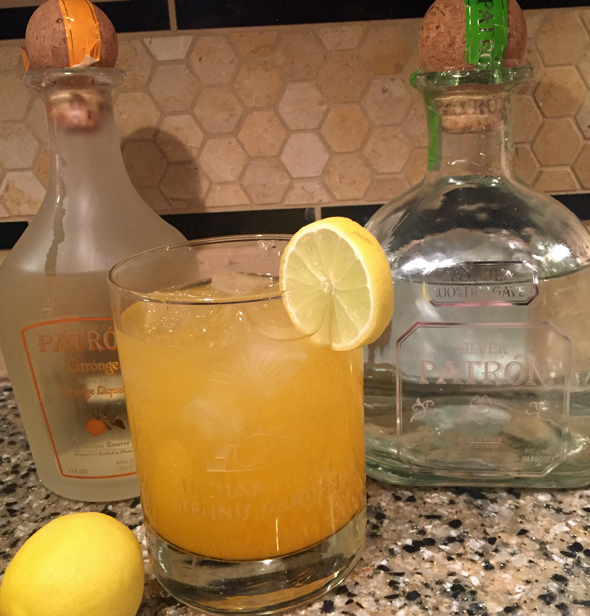 Thank goodness for Gina! She gave us so many mandarins and so many Key limes! I made a margarita, but cut the orange liquor in half with mandarin orange juice. Perfect. 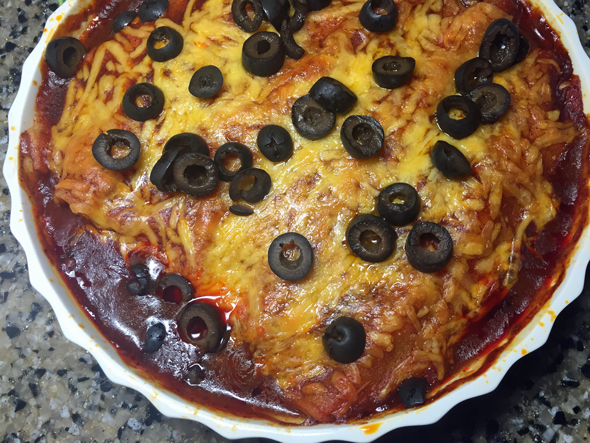 The cocktail went really well with the Green Chile Enchiladas (made weeks ago and frozen for such an occasion). All I had to do was pour a can of enchilada sauce over, sprinkle a little cheese and garnish with olives when finished cooking. I also served tossed greens.

Until my next update, I remain, your "it's been a strange and confusing day" correspondent.

RV Park: Castle Air Museum RV Park. Near the Castle Air Museum in Atwater, California. Just a few (12) sites (make a reservation). There are several dry-camping sites as well, with a dump station. No bathhouse, laundry, no cable or anything - but they now have wifi! 30/50 amp back-in sites with water and sewer. We paid $25 per night.

« In Lincoln with Family We Have Arrived »