Paris, France:  Since we had walked so much yesterday - way too many miles for My Limping Driver - we decided to make use of the many Hop-on Hop-off bus tours available in Paris. And by Paris, I mean next door to our hotel. It could have not been easier to get a good view of the city, especially since we scored two seats on the upper deck of the open-top bus. It is amazing what you can see from the top of a bus: 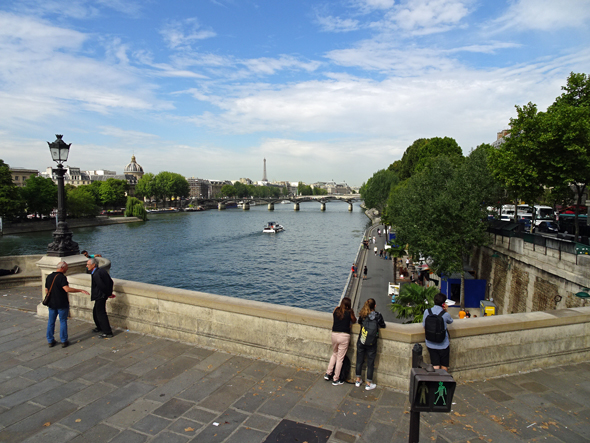 We drove along the Seine River, onto the river island with Notre Dame, then down the other side of the river, down the Champs-Elysees, around the Arc de Triomphe, and to the Eiffel Tour, where we exited for the first time. We had a date with Brandy. Brandy was in Ha Long Bay in Vietnam and we were at the Eiffel Tower, so we were going to facetime. Our connections would not work, so we sent photos of ourselves back and forth instead. Close enough. 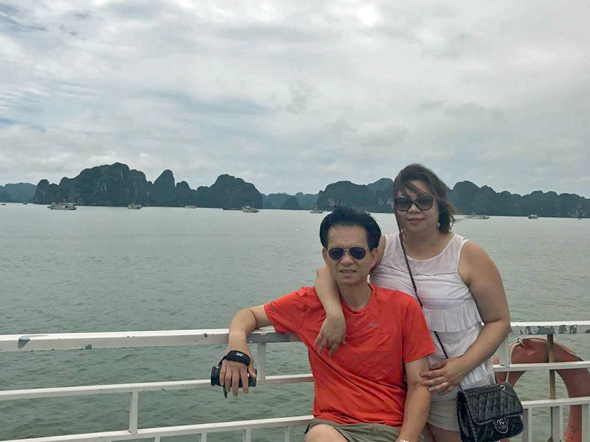 Brandy, with her husband, in Vietnam 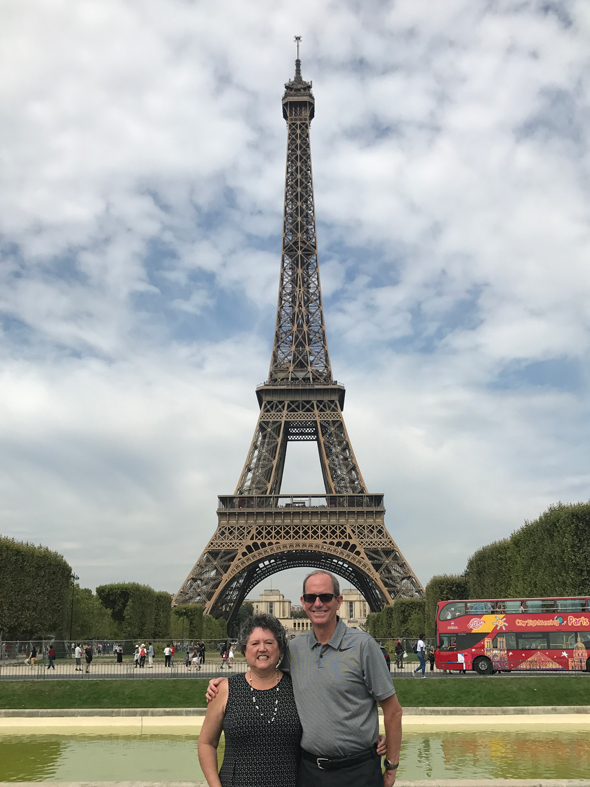 We did not even try to go to the top of the tower. This is our third visit to the Tour Eiffel and the third time we have visited Paris. We have yet to go up inside the tower. Too many people and too long for DT to stand. Seriously, there were so many people crowding around the area, we just wanted to leave and view the monument from our hotel room window. 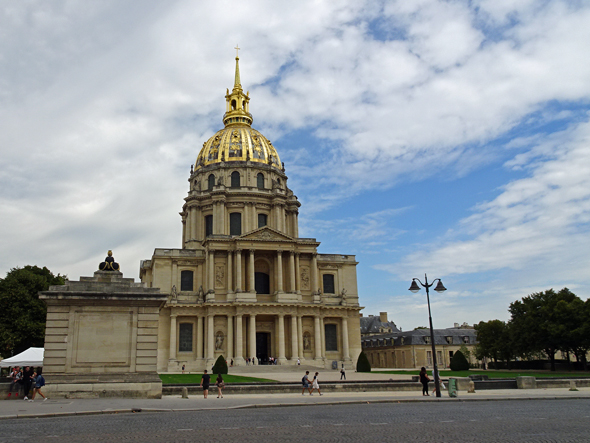 We walked downhill a bit from the Tour Eiffel to see the Musee de l'Armee (the military museum) which is in Invalides. Napoleon Bonaparte is buried in Invalides. And then it was time for lunch. 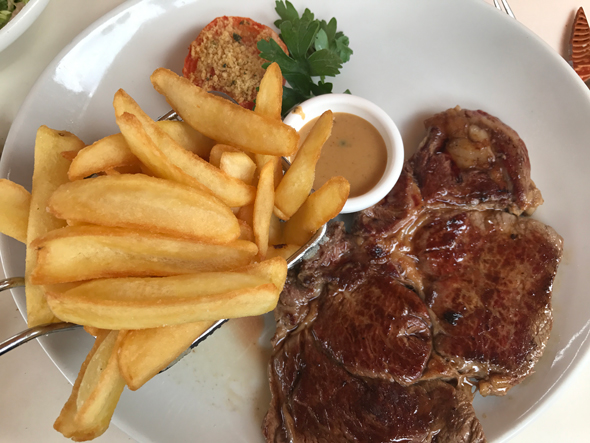 Set price lunch: green salad, steak frites and a glass of wine for 19 euros. Our jaws had quite a bit of exercise chewing the steak.

We hopped back on the bus and rode to the Opera district, which houses a magnificently massive department store. We had a mission: a dress for Lucy for her birthday Saturday. Mission accomplished, but not without some difficulty finding the correct building which held the children's department in the new Printemps department store(s) and not without a bit of shopping. As much as I love Our Lucy, I was not going to spend $500 on a dress for a three year old, and that was the going rate on many of the frocks. We found a beautiful (more practical) dress made by a brand her mom used to wear when she was a girl, Petit Bateau - and it was made in France. Hope she likes it and hope it fits; it can't be returned.

After shopping, we stopped for a rest, a coffee and piece of Opera Cake from the famous Cafe de la Paix in the Grand Hotel, the hotel we stayed in during our first visit to Paris in 1992. 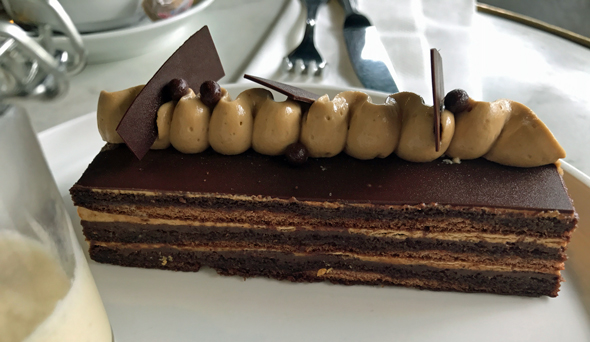 A girl can't live only on chewy beef. 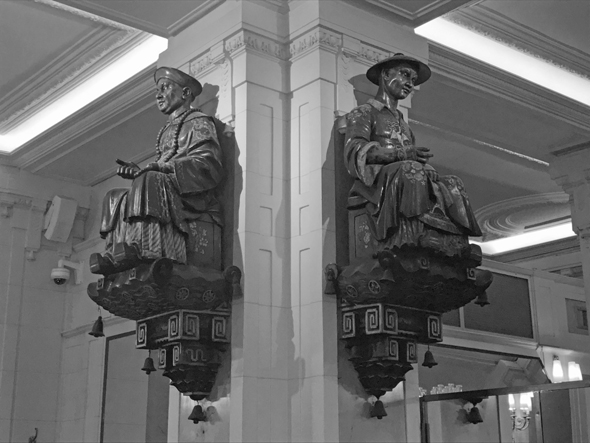 We hopped back on the bus and returned to our hotel for more rest and then set out again (via taxi) to St. Germaine to a very touristy restaurant - Les Deux Magots, roughly translated to The Two (Chinese) Magicians. This cafe has been in operation since 1884, and is famous for the two Asian statutes of magots (magicians) watching over the customers from the ceiling of the dining room. We had not visited this restaurant during previous trips to Paris, so decided to give it a go tonight.

The cafe was a favorite of Oscar Wilde, Ernest Hemmingway, Pablo Picasso and a score of other writers, painters, politicians and poets. Tonight we joined the crowd. 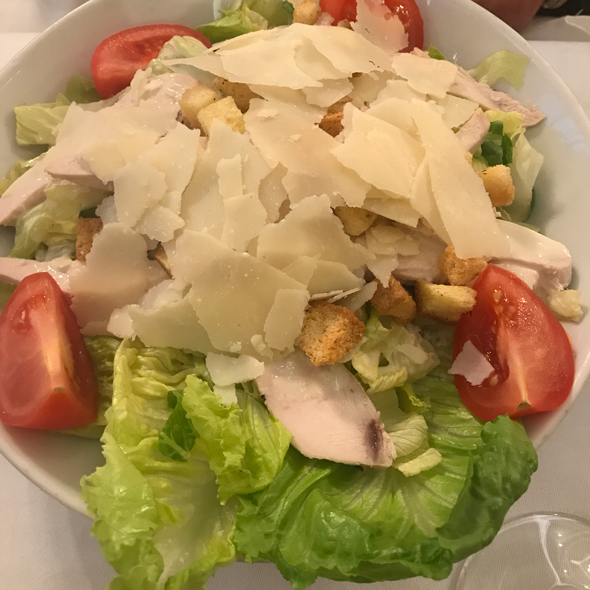 After such a big lunch, DT had a chicken Caesar Salad 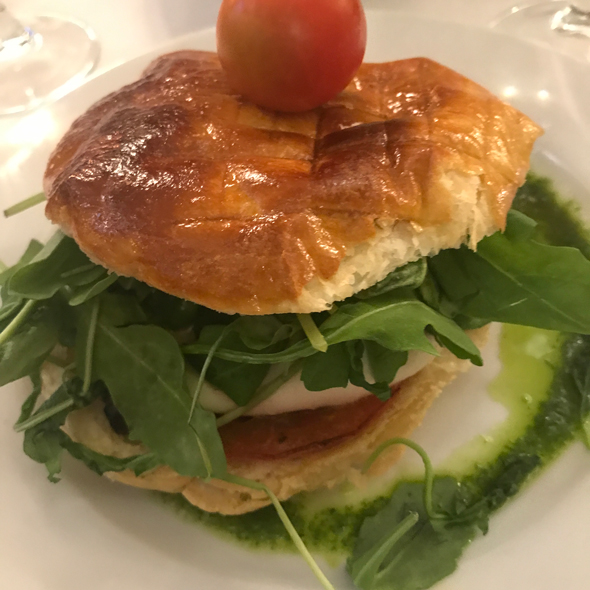 I ordered grilled vegetables and mozzarella in puff pastry and pesto

Another fun day in Paris!

Even though we used the bus and a taxi back/forth for dinner, we still walked 5.5 miles. Poor DT! He continues to do his PT and ices his knee twice a day - every day!

All that activity did not stop him from wanting to ride the Ferris wheel across the street from our hotel when we returned from dinner. I had several glasses of champagne at dinner, so it did not take much convincing. They sent us around six times, so I had time to video one rotation so you can ride with us:

You know we smooched when the car stopped at the top! 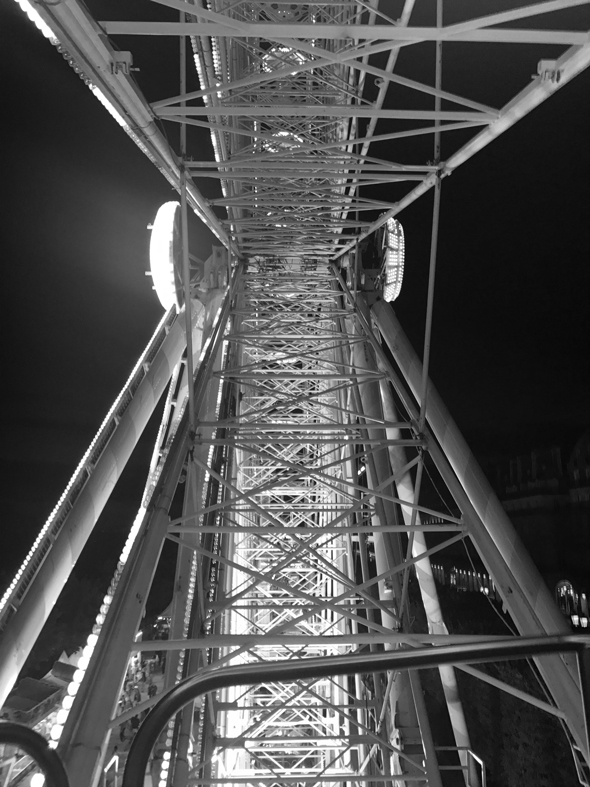 After returning to our room, DT was icing, and staring out the window at the Eiffel Tower - all lit up and shiny in the night sky - when the 11p light show began. The tower sparkles for five minutes. So pretty:

Until my next update, I remain, your sparkly correspondent.