Phoenix, Arizona:  It is with a very sad heart I announce (like you haven't already heard?) the Ducks lost their Final Four contest against North Carolina. They fought and fought. Neither team was hitting shots, but in the end, The Tar Heels made one more shot than the Ducks to win 77-76. One lousy point.

Dave and I had a good morning. He worked out in the hotel fitness center (while I slept) and then we walked a few blocks to a restaurant to attend a brunch hosted by the University of Oregon. Then we put on our game-day attire and boarded a shuttle bus from the hotel to the University of Phoenix stadium. The six hotel buses were escorted by police cars - complete with sirens and flashing lights - through downtown, onto I-10 and finally north to the stadium. Kathy and Woody arrived from Palm Springs this morning. The Family of Friends Posse ride again. 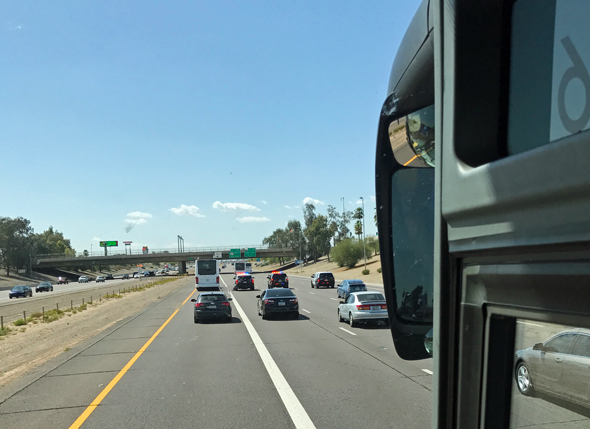 This was the closest I will ever be to feeling like a rock star or a politician... and the first time I have ever had a police escort when not actually handcuffed or riding in the back seat of a squad car.

But, dang, wouldn't that make a great blog post?

Once at the stadium, we had to make a quick trip through the Fan Fest, because we were less than one hour from tip-off to the Gonzaga v South Carolina game. The lines through security were not too long (I had my plastic see-through purse!), but the lines to show the entry ticket were ridiculously long. It took us 40 minutes to get into the stadium after we cleared security. 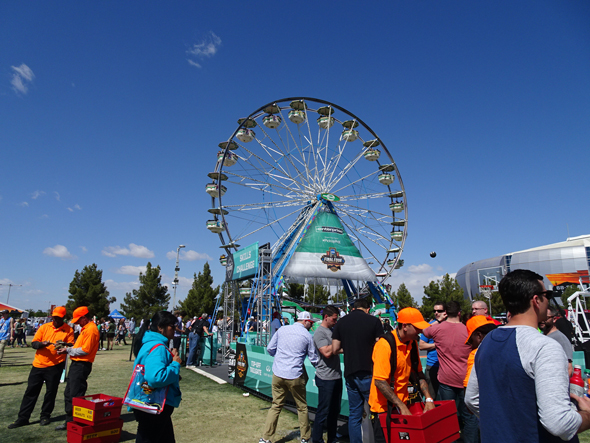 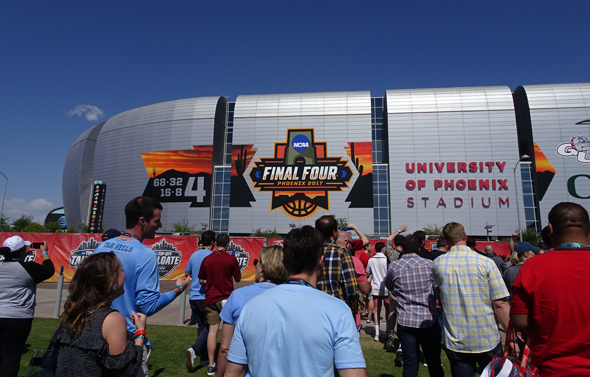 Then the concourses were so packed, and the lines to the bathrooms were so long, we did not reach our seats until three minutes were gone in the Gonzaga v South Carolina game. We were unsure as to why the chaos was so extreme. Did no one at the stadium remember the Final Four games were being held today? Did no one do the math to realize the seating was reconfigured to include about 15,000 additional seats when converting a football stadium into a basketball stadium? I will probably never know, but the bathroom lines were out of control and the concessions ran out of food before the second game even started. No fun.

Dave had arranged great seats. I guess our seats could be best described as "somewhere along the sidelines of a football game" if the stadium had not been reconfigured to house a basketball game? We were in temporary bleachers set up below the usual football seats.

In the first game, the Gonzaga Bulldogs beat the South Carolina Gamecocks. Gonzaga will face the winner of the next game. Our game. Oregon fans cheered wildly for the Zags. They are so good. Always a very popular NW school. The Zags are the only team we follow outside the Pac-12 and The George Washington University (Lisa's alma mater). 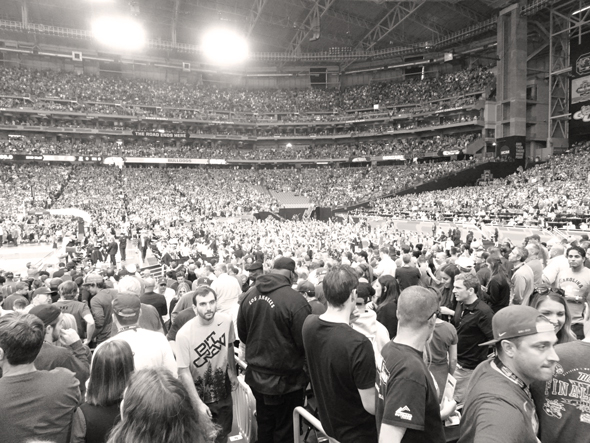 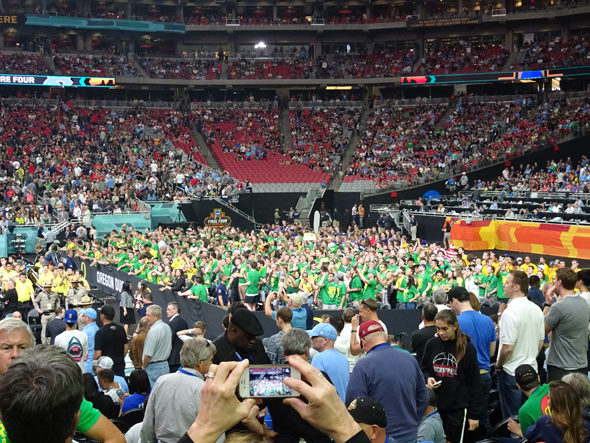 Oregon student section behind the bucket 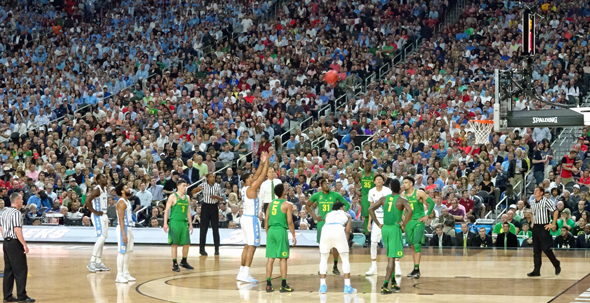 The view from our seats

The Ducks never could get control of the game. It's not like either team shot lights-out. Neither team went on-fire with three-pointers. North Carolina led most of the game, with the Ducks continuously trailing by a few points. We came so very close in the end.

The Ducks lost to North Carolina. 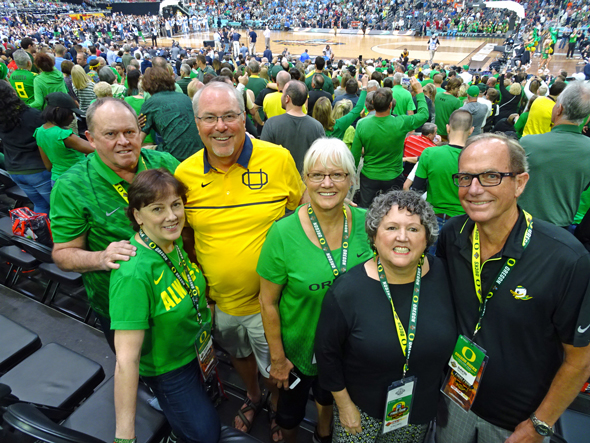 How many stadium photos do you suppose we have together? More losses than victories in the Big Games, but we still keep attending. We love Our Ducks.

After our loss, we grabbed the shuttle bus back to the hotel and ordered snacks and cocktails in the lobby bar. The hotel is still serving every drink - from a draft beer to a Manhattan - in a tacky plastic cup. Happily, I did not have to endure such low-class shame - thanks to Hans. 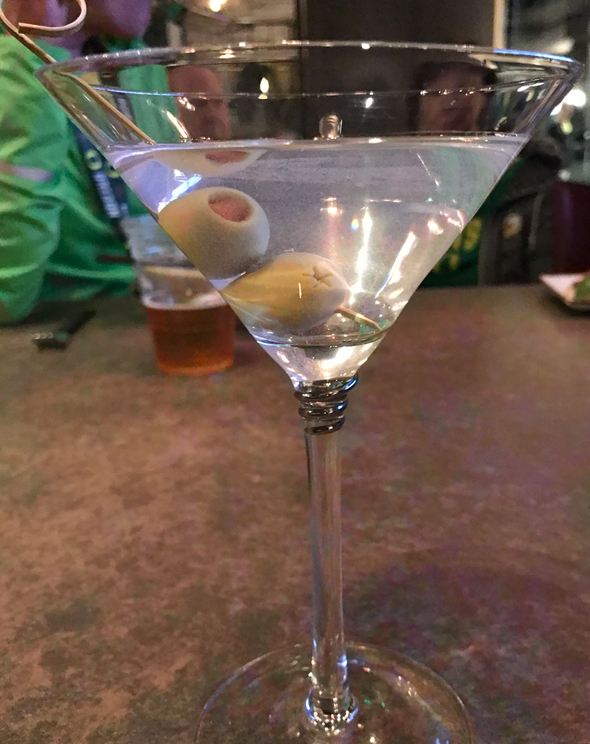 Y'all have heard of BYOB? I am now guilty of BYOG.

Until my next update, I remain, your "I LOVE MY DUCKS" correspondent.
« Report from Phoenix Take Me Out to the Ball Game »