Newport in the Rain

Newport, Oregon: We must have a storm cloud following us up the coast. Meanwhile, in Indio, the temperatures are in the high 70s-low-80s. I guess we left for Oregon too early this year… or so My Driver tells me every day. The bad weather didn’t stop Dave from riding his bike along the trails down the jetty and through South Beach State Park this morning.

We drove to Historic Nye Beach (shops, hotels, restaurants, and a beach) area for lunch at our usual haunt, Nana’s Irish Pub. 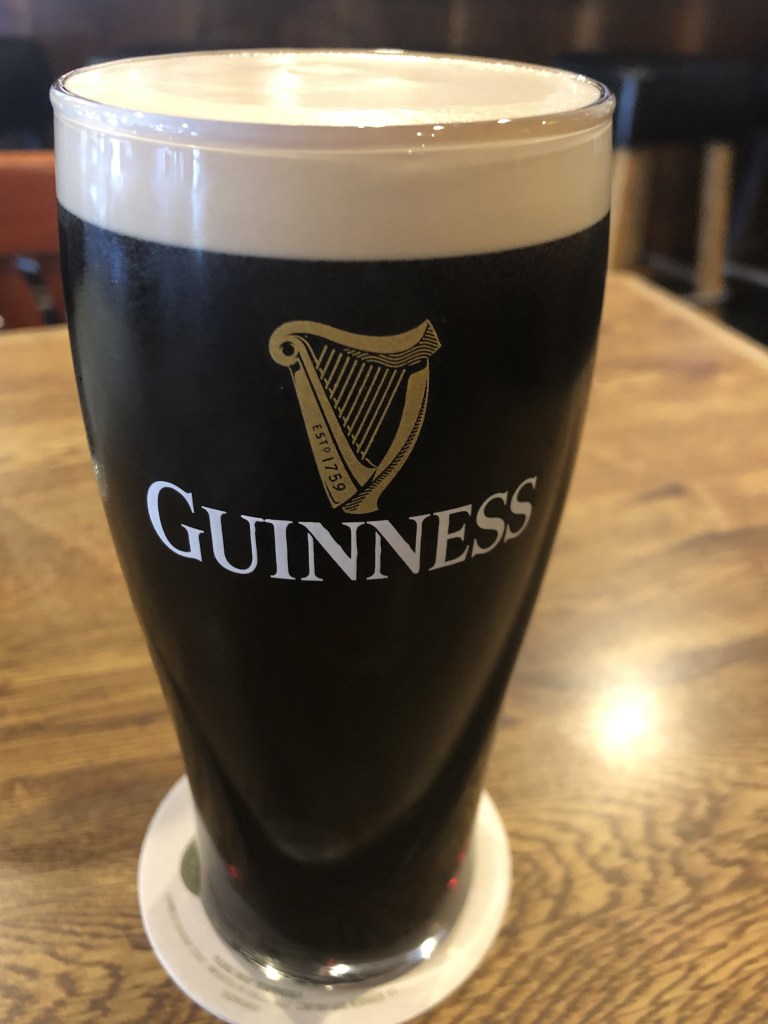 Every time we come here, we split the Reuben, or share fish and chips. I have no reason why today we decided to have something completely different – chips doused in corned beef and onion and cheese. Like Irish nachos. They were really good, though we could not finish the order (it is an appetizer). It usually comes with bacon as well, but we asked for it without. Don’t you think it needs a little parsley or green onion garnish? 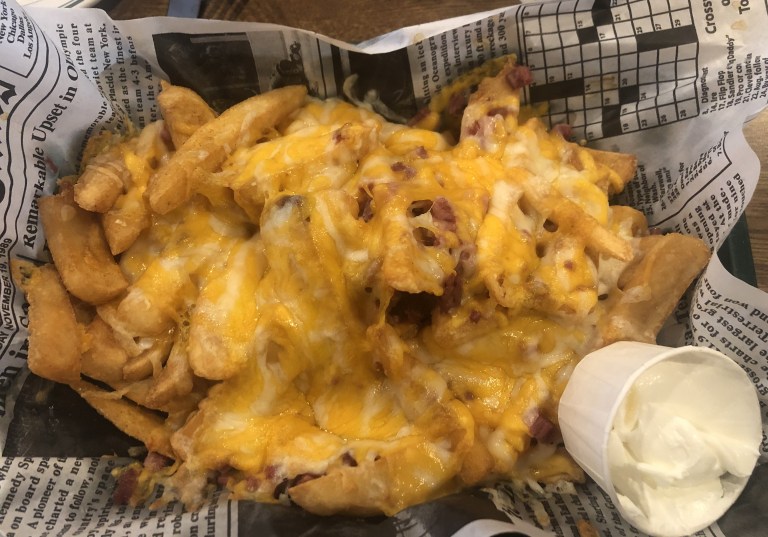 There was a pause in the droplets, so we walked down to the beach after lunch. What a dreary scene. A few lone souls on the foggy grey beach, with grey water and grey skies beyond… and this dreary old woman with grey hair. 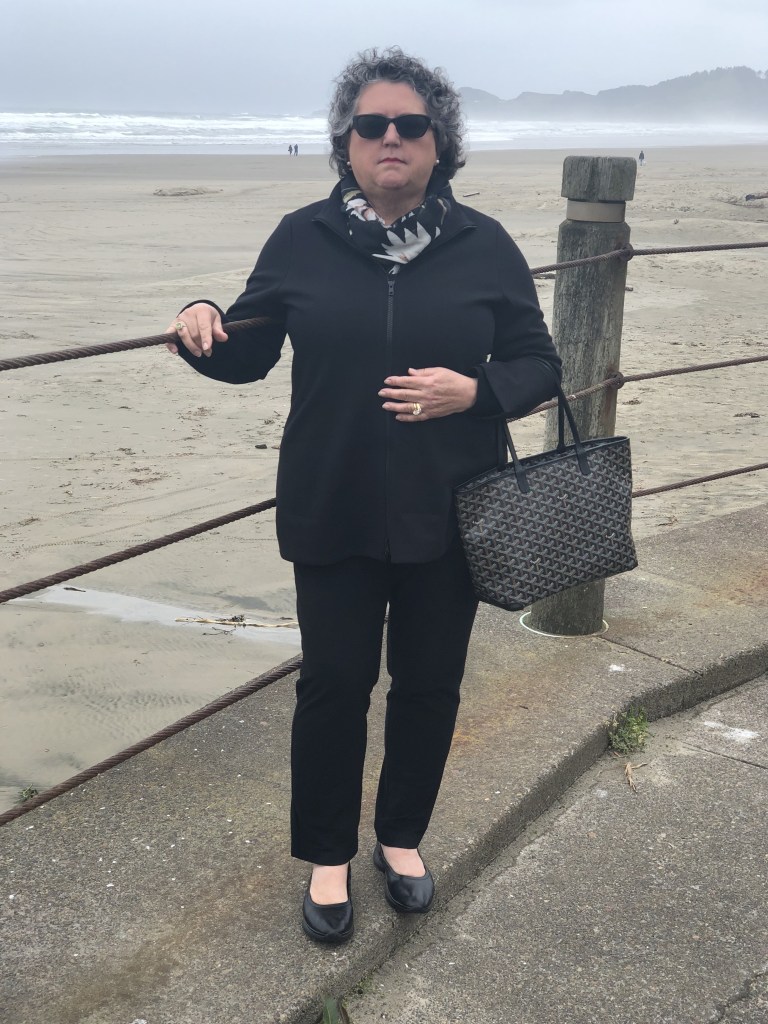 Why all the photos of me suddenly appearing on this website? First of all, this blog serves as a personal journal of our life and travels. As you may remember, the photos and stories are printed into a hardcover book annually, like a fancy-schmantzy scrapbook. Not that I want to ever see a photo of myself, but there are so few of me. Dear Reader, listen to me! I learned a valuable lesson as the family gathered photos of Dave’s mom to use on a slideshow to play on a loop at her memorial service – there are few photos of the photographer! Virginia was well into her 80s, and we found 70 photos for the program. Not even one per year! True, 80+ years ago people didn’t have digital cameras or cell phones in their pockets 24/7/365. Having a photo taken was often done in a studio by a professional, I imagine at some expense. Many people (especially my mother-in-law) simply hate having their photograph taken. Virginia refused me countless times.

We need to get over our fear of photos! Okay, I am not over it and have notable photoshop skills, but, so what that I am in my mid-60s, wrinkled, fat, short, and grey? This is what I look like. Wouldn’t want to wait for the funeral to see these gems:

After our walk, we drove down to the Historic Newport Bay Front. This area is filled with shops (most of them tacky and most of them selling candy and tee shirts), fish canneries, a few touristy museums, several seedy bars – but a few good restaurants and a few nice shops. Best thing? A group of sea lions have taken-over a dock for many years now, and we love to watch them, listen to them bark, and fight for real estate on the small dock. 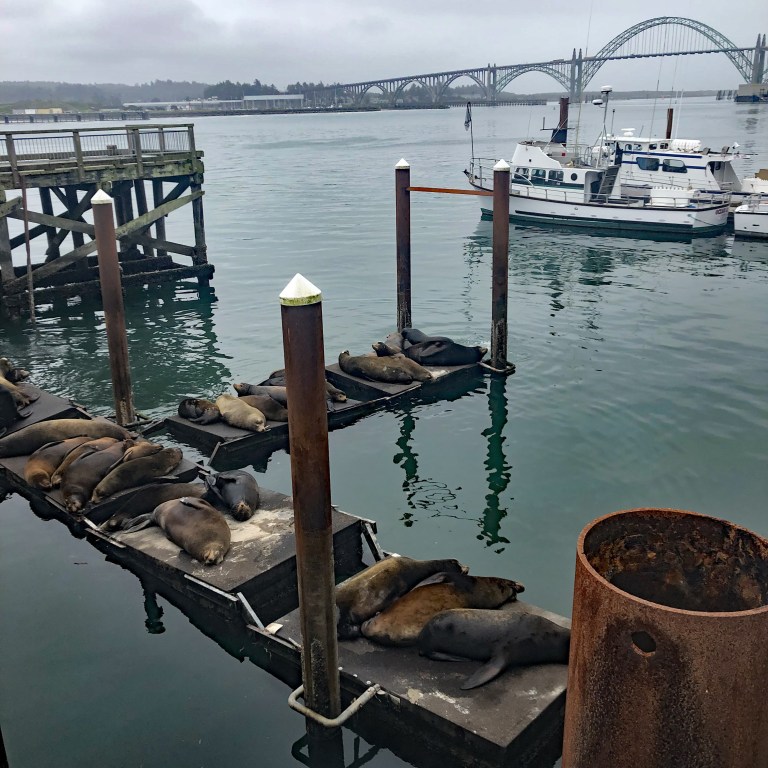 For the first time, we saw two pups in the group. Pretty dang cute, except there may be a bit of trouble. All of the sea lions on this dock are male. The females are down in SoCal giving birth. Only the boys come up to Oregon for the summer season. We can’t believe these two little dudes made it all the way from the south (possibly as far as Baja) without a mom. The smallest one can’t weigh much more than 40 pounds. Everyone in town is commenting on how they have never seen a pup here. Apparently the authorities have been notified, but it’s usually not wise to mess with Mother Nature… but… seriously, he is so teeny. 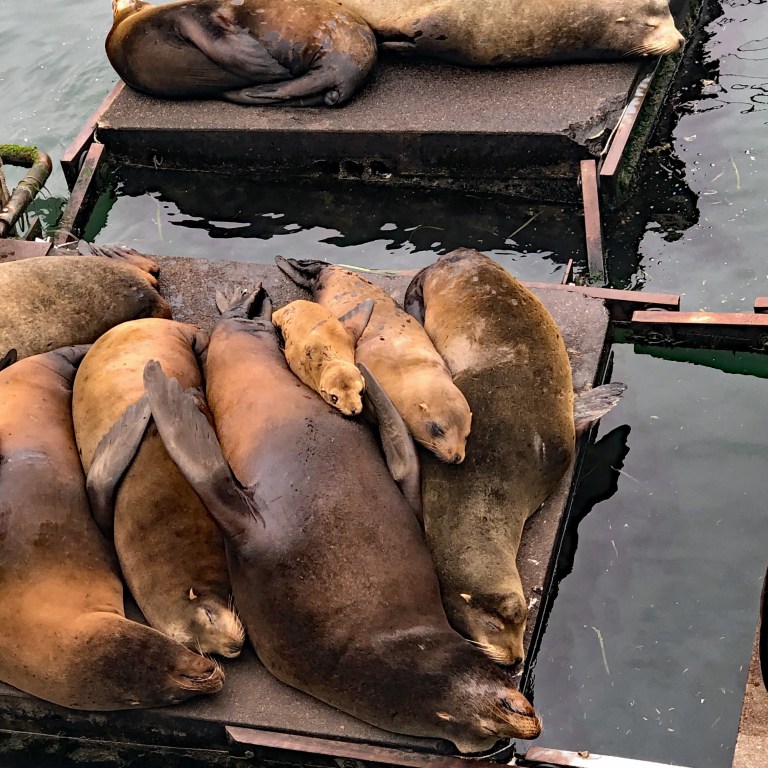 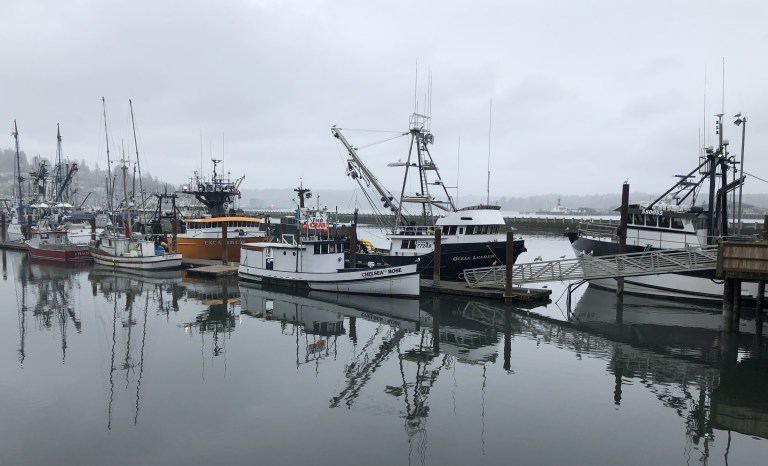 It really started raining, so we came back to the warm RV. Before dinner, DT went out to brave the fog to see what the crabbers were catching, and to see what was happening on the dock behind the campground. He captured a few great shots with his phone: 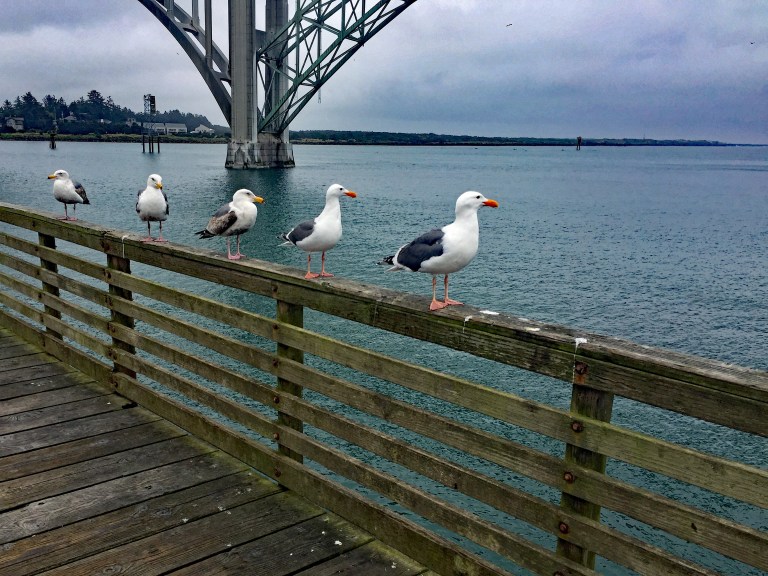 Ducks Gulls in a row – Photo by DT 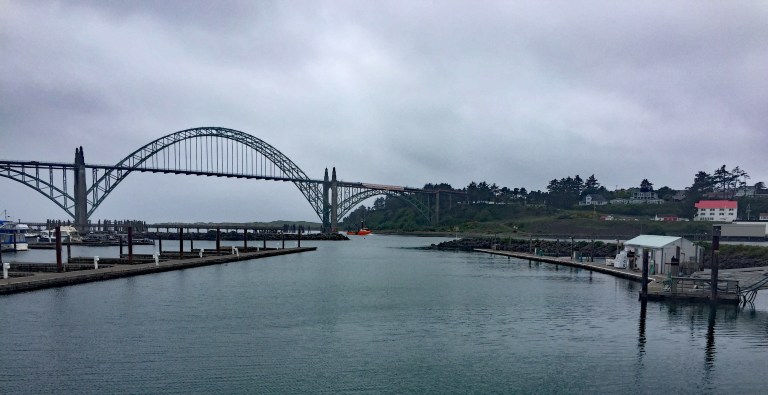 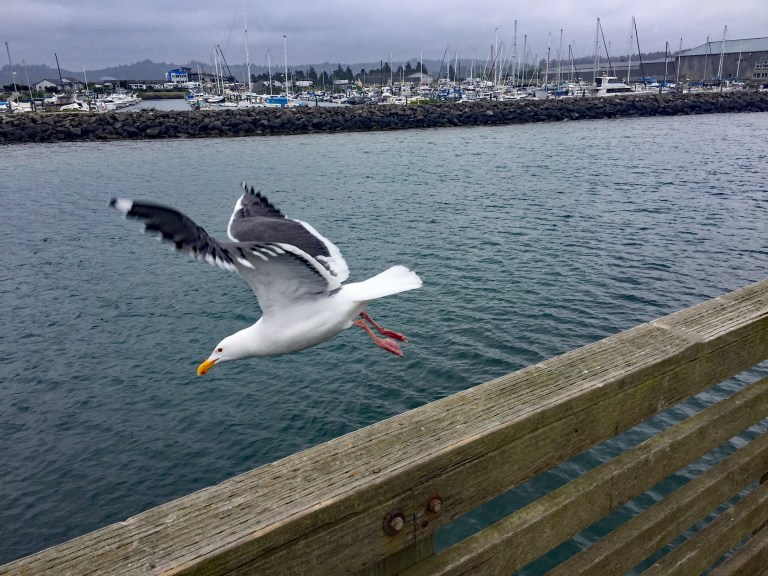 For dinner this evening, we tried a new-to-us place on the Historic bay front, Clearwater. The restaurant features locally-caught seafood, has a full bar, and is situated directly above the dock hosting the group of sea lions spending the summer in Newport. 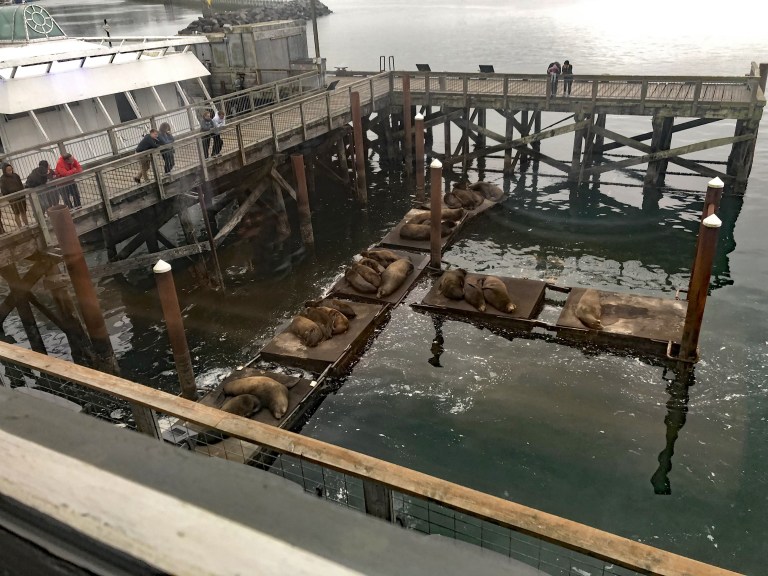 The view from our table at Clearwater

While we were dining, the old boys kicked-out the teeny little baby. I think they were barking telling him to go out and get something to eat or you are not going to make it through the week. The little guy slithered off the dock, but returned about 10 minutes later and tried to slide back up into his group of warm pals. The old dudes barked and barked and barked. Baby sea lion left again, and did not return during the rest of our meal. Will he make it? 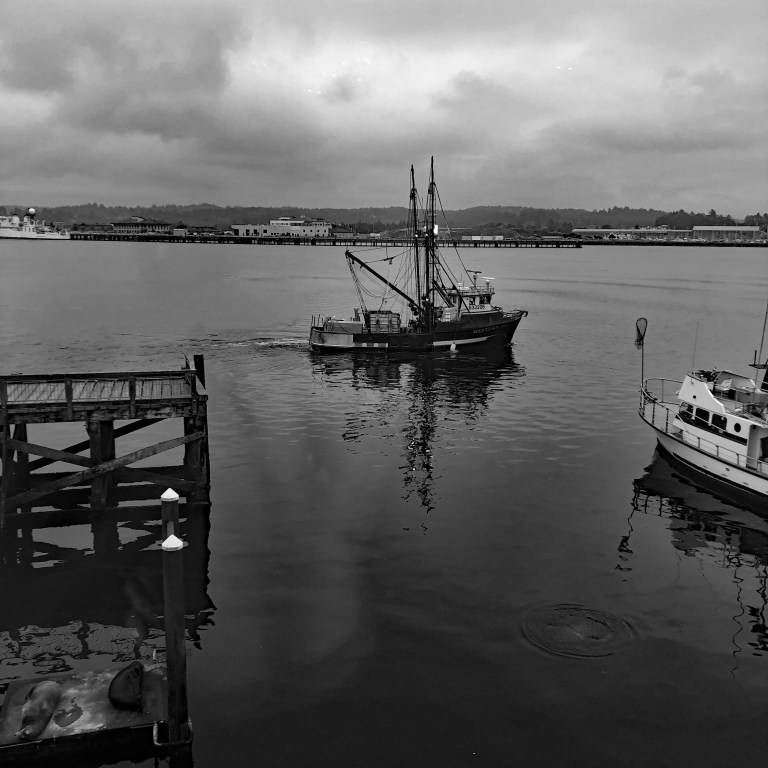 Fishing boat heading out to sea this evening in Newport, Oregon.

We are in no chance of not making it through the summer with our seafood consumption this week. Clearwater (as with every restaurant in America) serves massive portions. 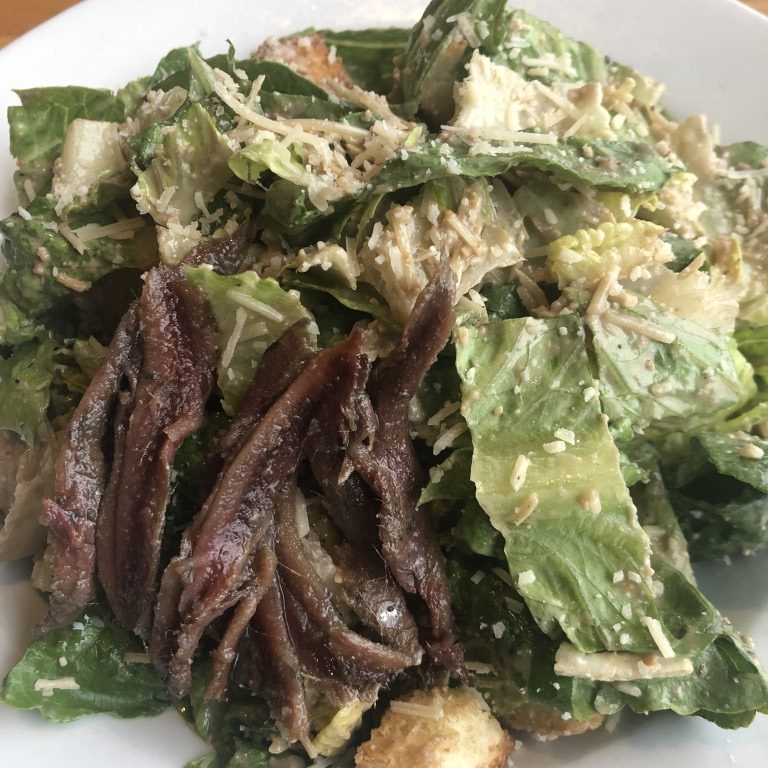 We split the Caesar, but it was way over-dressed (soggy) and – with the anchovies –
ridiculously salty. We did not eat this. DT wondered why I order something in
a restaurant that I make several nights a week at home. He has a point. 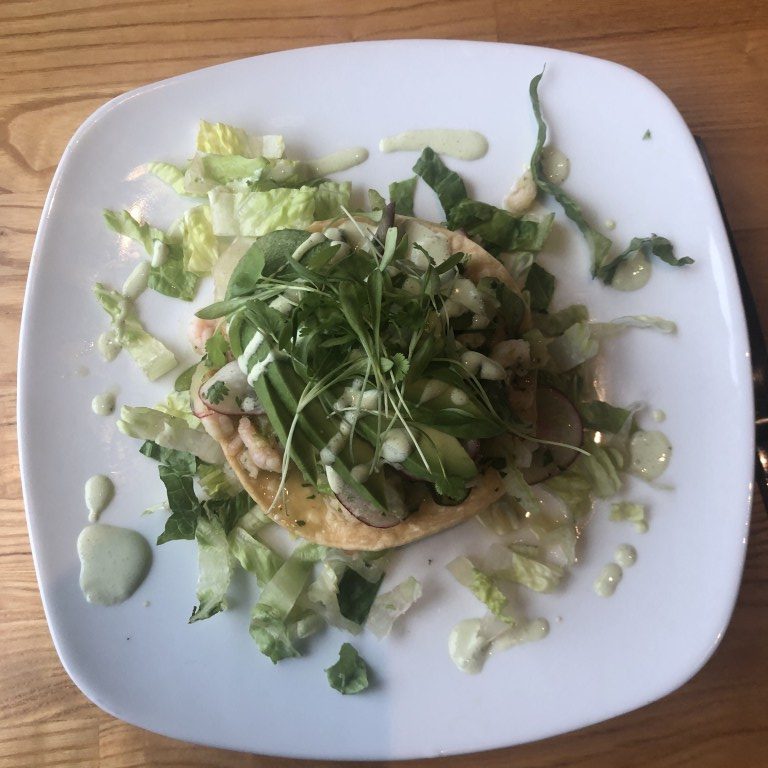 DT had the shrimp ceviche tostada and ate every bite. 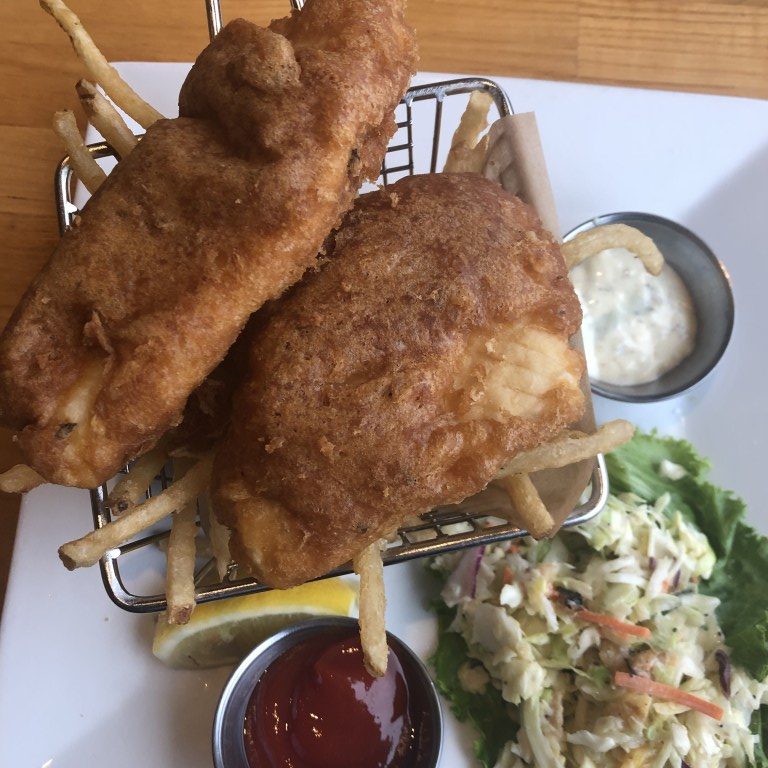 Halibut Fish & Chips – it was crunchy!

Though my martini was perfect, there was just something just not right with the food at Clearwater. Our server was very good, and the view to the bay and sea lions could not be topped. We will give this place another try at another time.

Until my next update, I remain, your photographed correspondent.

RV PARK: Newport Marina RV Park – city-operated campground just east of the famed Newport Bridge. From this campground, you can walk to the Hatfield Visitor Center, the Oregon Coast Aquarium, and the Rogue Brew Pub. The Hatfield Center and the aquarium are across the street; the brew pub shares a parking lot with the campground. Full service, 50 amp, cable, wifi, laundry, bath house, etc. We are paying $50 per night.