Newport, Oregon: Six months after pointing our motorhome south to winter in Indio, we have returned to our Home State. Sadly, our state was not happy to see us, and gave us a free bus/car wash much of the day. Our drive north on Highway 101 was much longer than we usually attempt, and the road is basically never straight. We are much happier at less than 200 miles per day.

Miraculously, we left Crescent City before 10a. Probably because I did not even attempt to exercise in the windy rain. (I cannot say the same for My Driver. He jogged.) While Dave was out slogging through the storm, I showered, then put everything together for a recipe that popped-up on one of my (way-too-many) feeds – Sheet Pan Chicken with Garbanzos, Cumin and Turmuric. Randomly, I had everything in the RV to make this interesting dish. (Except I did a half-recipe and used lime juice, instead of lemon juice, because I had a bunch of already-sqoozed lime juice.) The chicken marinated all day in the yoghurt sauce.

We only stopped three times on our long drive north today. The first stop was in Gold Beach to Fishermen Direct. Long-time Readers will remember we love their canned tuna. First, it is local and sustainable (as is possible these days), the tuna are small/young, so no mercury, and thus is safe for children and pregnant women – which means… for all of us. The only problem is that after you have canned tuna from the Oregon coast, the supermarket stuff (most of it is caught/canned in Thailand these days) just won’t do. 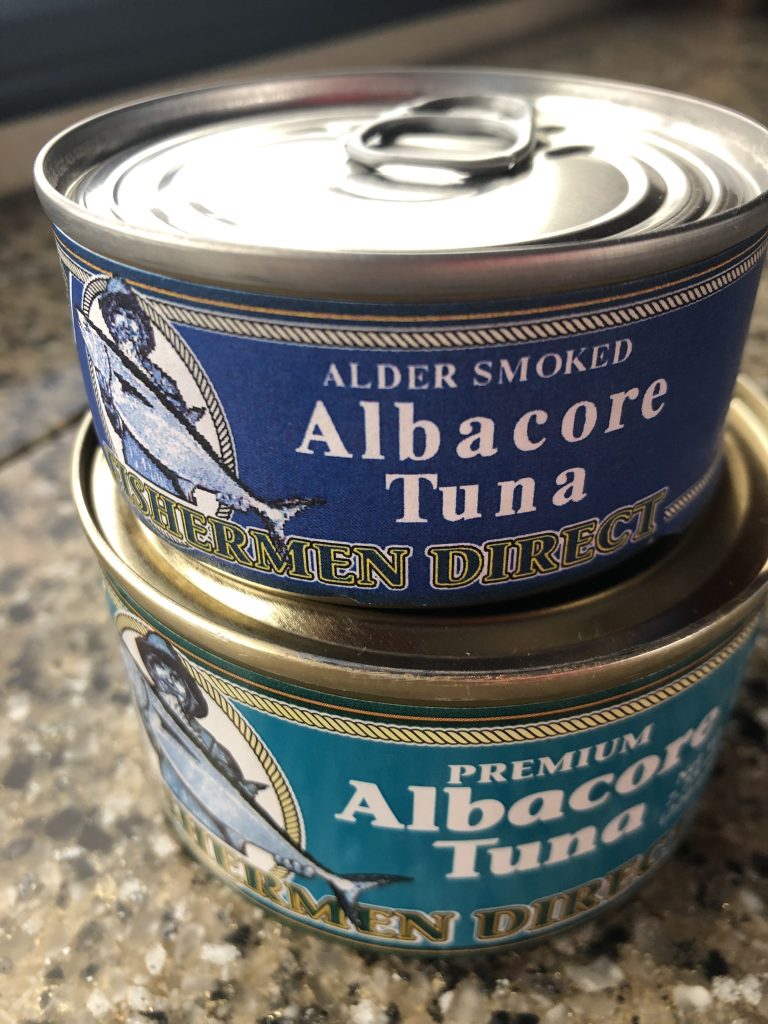 We bought albacore and a few “appetizer” sized cans of alder-smoked tuna. Just so delicious. They ship!

Our second stop was in Coos Bay for lunch. We pulled-into the Old Mill Casino over-sized vehicle parking area along the bay. I heated-up the last of the soup from last night, while My Driver had a little rest before trudging north again.

The last stop was for fuel. Diesel is a full dollar cheaper in Oregon, compared to what we paid in California. $3.24 per gallon today. When we filled up in California last week, we spent $450. Today, at nearly the same volume, we paid $316. Oregon roads are so much nicer as well. Come on, California!

Most of the day was rainy. The route from the California border to Newport, Oregon – on Highway 101 – is truly a spectacular drive, even in rain. The road is pretty good – though it does get a bit slow-going at times with tight turns and occasional landslide-go-arounds, but we always found a spot to turn-out if too many cars were gathering behind us. We could see patches of blue out to the west, and occasionally we had sunshine. The sea was very angry, and waves were high and roaring into shore all day. Huge monoliths dot the coast in southern Oregon. They are spectacularly beautiful, even in rain, with massive waves pounding over the rocks. Pretty vistas. Lighthouses. Cranberry bogs. Lakes. Oregon is a wonder.

I bet we saw 50 bicyclists heading south (only a few were pointed north) on the highway today. They were all soaked, and so many were wearing shorts. It was so cold today! Brave athletes, exposing their legs to rainy environs.

As we checked-into the Newport Marina RV Park, we noticed new construction at the Mark O. Hatfield Marine Science Center, operated by Oregon State University. They are undergoing a huge expansion. Yeah, Beavers! 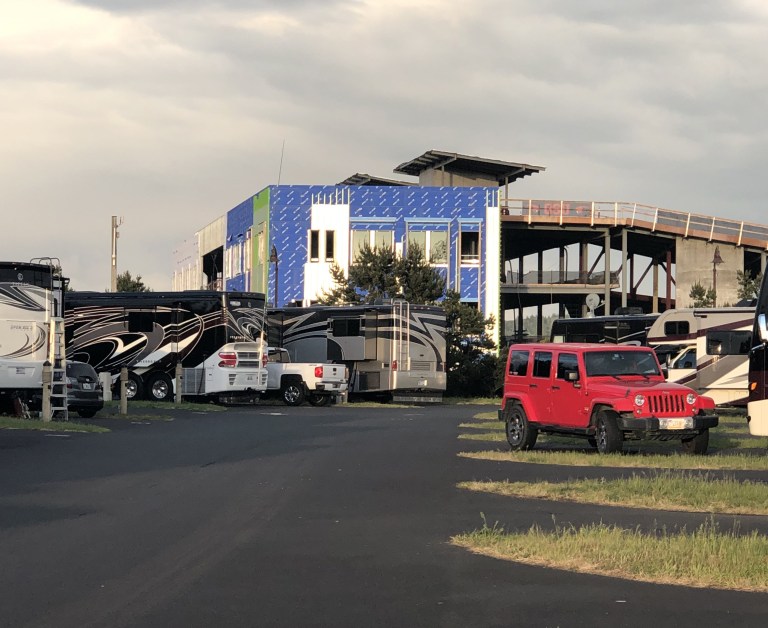 The chicken dish was not the greatest thing to ever come out of this kitchen, but we enjoyed it enough, with roasted asparagus spears… and the Giants – winning – on television. 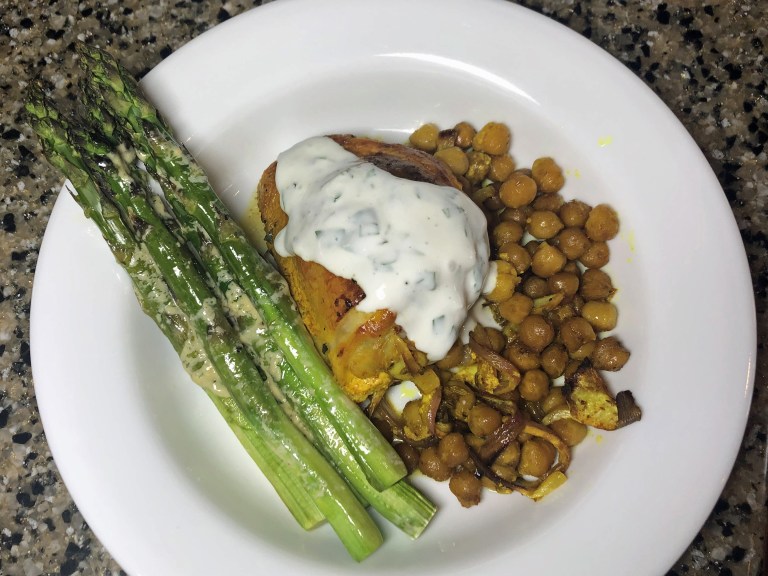 Sheet-Pan Chicken with Chickpeas, Cumin, & Turmeric. I was lazy and
just put the fresh mint (from our Indio garden) directly into the yoghurt sauce.

I think this was maybe the second time (ever) to use the oven racks in my new convection oven.

Calling it an early night. From our camper to yours, have a lovely evening.

RV PARK: Newport Marina RV Park – city-operated campground just east of the famed Newport Bridge. From this campground, you can walk to the Hatfield Visitor Center, the Oregon Coast Aquarium, and the Rogue Brew Pub. The Hatfield Center and the aquarium are across the street; the brew pub shares a parking lot with the campground. Full service, 50 amp, cable, wifi, laundry, bath house, etc. We are paying $50 per night.