TrackTown, USA: For those of you not following along, today was the final (last) day of the national collegiate track and field championships, hosted by the University of Oregon at Historic Hayward Field in Eugene.

Every event today was a final. Everything was on the line. Put up or shut up.

And though I warned a few days ago of no food photos, what girl could resist using her phone to snap a photo of a Cafe Yumm! Hot & Jazzy rice bowl topped with tofu? 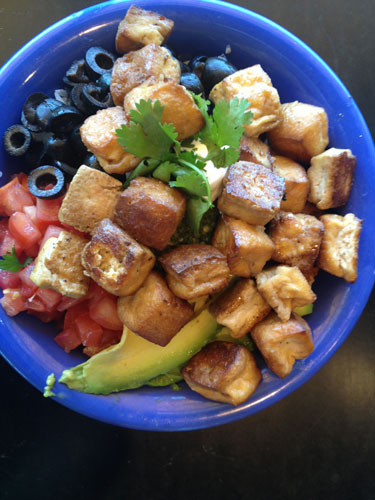 Cheap eats in The Eug

Seriously? I could roll in this stuff.

Back to the track for the final day of competition. 82°. Sunny. Every seat filled. Just a perfectly fantastic day for The One True Sport. I so love that athletes dream to compete at Historic Hayward Field. Over and over again, when interviewed after their victories, the kids wax on and on about the glory of Hayward, the crowd, the history of the track, and the knowledge of the fans in the stadium. It is true we cheer loudest for Our Ducks, but we root for every athlete, clap hard when they win and emote when they fail.

TrackTown USA has a booth at the Championships where you can pose for a photo in front of a fan-filled stadium backdrop. Dave and I found ourselves in the crowd photo - taken during the 2012 Olympic Trials and posed in front of ourownselves! 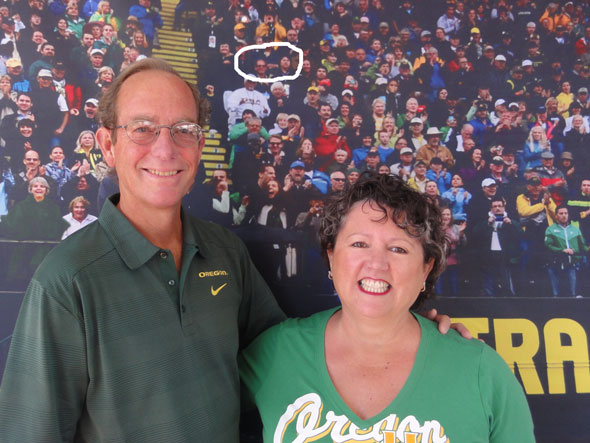 It's like a Twilight Zone episode sometimes, our life. 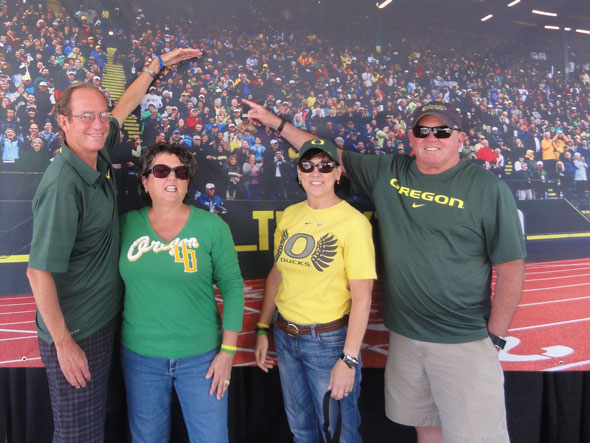 Not to be left-out of the TrackTown USA love-fest, Mary and Steve found themselves in the crowd photo and joined us in a group selfie. 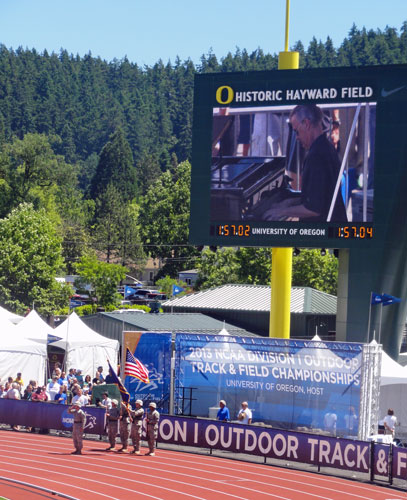 Another interesting tid-bit: musician Bruce Hornsby's son, Russell, is an 800m man for the Ducks. Today Mr. Hornsby played a free concert for fans the hour prior to the meet and he played the national anthem, with a color guard from the Army as escort. Every day during the competition, veterans were asked to stand - to be honored by the crowd. Thank you!

It was a most interesting afternoon at the track. Given a few scenarios, the Duck men and women teams could have won the national title. It was not to be. Very sad, indeed, as the women had already captured the NCAA cross country and indoor titles. Winning the outdoor championship would have been the Molotov Cocktail on the cupcake. Instead, the Women of Oregon finished in third place behind a very surprised University of Kansas Jayhawk team. Buoyed by an unexpected first-place finish from their heptathlete, Lindsay Vollmer, the Lady Jayhawks won with 60 points. This is the first-ever national title for the Lady Jayhawks. Texas A&M finished second with 44 points and the Ducks had one less for third. 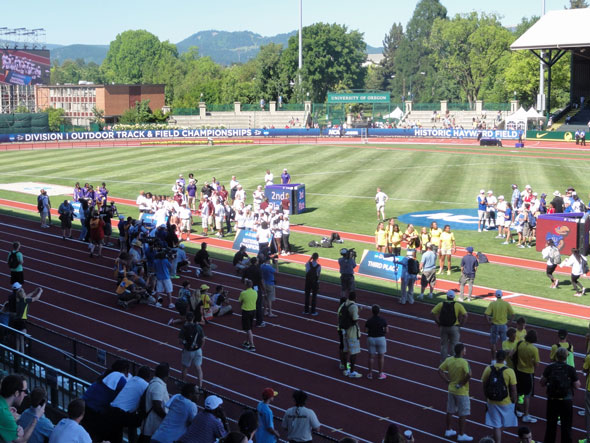 I'm not sure when this started, but now the NCAA awards trophies to the fourth-place team. (In our day, it was 1-2-3 only. Maybe soon, it will be like Little League where everyone is a winner and receives a trophy?)

To quickly recap the races today for the Women of Oregon: they finished 4th in the 4x100 and 4x400 relays. Sadly/oddly both girls finished last/second-to-last in the 1500m and our high jumper finished out of scoring contention. Ending the competition as the 3rd best team in the country is an amazing accomplishment. Congrats to the Lady Ducks! 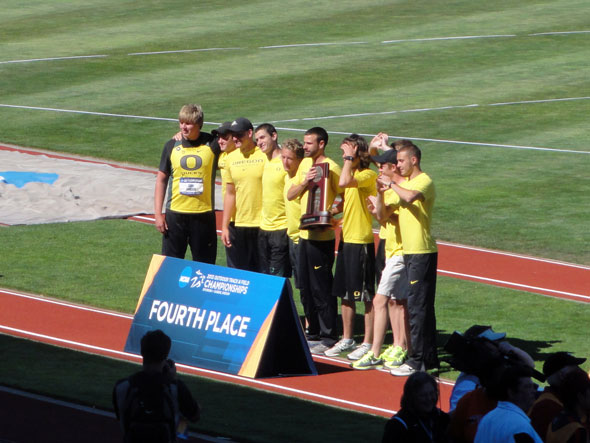 The Men of Oregon had a very exciting day as well. Jonathan Cabral finished 5th in the 110m hurdle final, Sam Crouser finished 3rd in the javelin and junior Mac Fleet won the 1500m in an electrifying performance (10 huge points!). In the final race of the meet, Michael Berry killed it on the final leg to bring the 4x400m relay team to a third place finish. The Duck men finished in fourth place over-all. 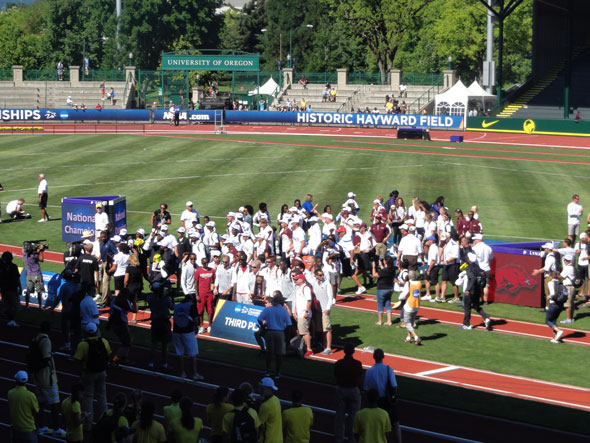 In a scoring oddity, two teams tied for first place in the men's competition. Texas A&M and Florida tied with 53 points. Arkansas was third with 46.50 points and the Ducks were fourth with 44 points. 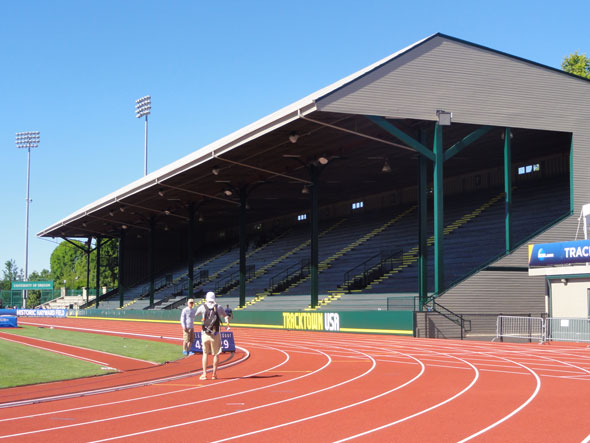 Suddenly, it's all over. The stands were empty. The fans went home. The athletes are resting, icing or having dinner with their parents.

Our trip is also coming to an end. This is my last Postcards from the Road column for a while. Tomorrow we will point this motorhome north to our home in Portland. It has been 215 nights since our trip started on November 5th. Time to go home.

Until my next update, I remain, your GREEN & YELLOW correspondent.

You may also like:
Official NCAA website
Beautiful photos from The Oregonian
Great photos and coverage from the local Register-Guard newspaper