TrackTown, USA: We continue on! Day Three was just a short program and races did not start until late in the afternoon. Dave went golfing with Woody. I stayed-in during the morning to be here while Brian finished our checklist of repairs and twiddling, and a crew came by to wash the exterior. The Magna Peregrinus is back in tip-top shape. The water heater is working properly again and we should be good-to-go for another year.

With a lot on the line, the Women of Oregon rose to the occasion and scored 32 points today, apparently with a lot of help from the cheering fans. English Gardener won the 100m in a personal best time of 10.96. English scored 10 points for the Ducks, besting Gail Devers Pac-12 record, set in 1987! GO DUCKS! Laura Roesler was second in the 800m for 8 points, Phyllis Francis was third in the 400m (with a personal best) for six points and senior Jordan Hasay finished third in the 5000m to score six points in her last race in the green and yellow. With one point scored yesterday in the javelin, the Ducks have 33 points for second place, and sit 15 points behind Kansas State. Oregon has competitors Saturday in the 4x100 relay, 4x400 relay, the high jump and two racers in the 1500m.

Senior Elijah Greer did win the 800m final - in 1:46-something - to score a huge ten points for the men's team. With five points from Greg Skipper's 4th place finish in the hammer throw and three points from Parker Stinson in the 10000m, the Duck men have 18 points for 6th place going into the final day of competition. Tomorrow they have athletes in the 110m hurdles, javelin, 1500m and a 4x400 relay team.

After the races, we attended the annual Lame Duck Reunion - a night for past Oregon tracksters to get together, catch-up, brag, joke and reminisce about the good old days. Anyone who used to be on the track team is eligible to attend, along with a guest. Since it is a reunion of Oregon track & field team members, it is a room full of champions! Though many people in the room tonight were grandparents, I am so happy to report many newly-graduated team members are joining the club to become Lame Ducks. 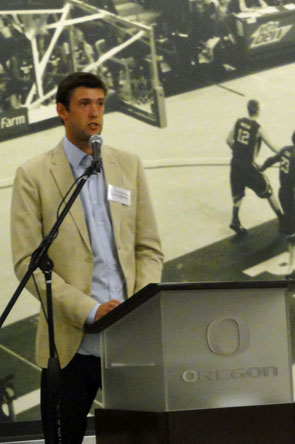 First-year member, Olympic (Canada) Heptathlete Brianne Theissen spoke to the gathering about what it meant for her to compete for Oregon and how the "Hayward magic" has continued in her professional career. Three-year member, two-time Olympian Andrew Wheating also talked to the Lame Ducks about the Power of Green & Yellow.

Another attendee tonight was Lame Duck Tommy Skipper. Skipper won the NCAA pole vault title every year he competed for the University of Oregon! He also won the indoor title in 2006. The only other Oregon track & field athlete to accomplish a four-time championship was Steve Prefontaine in the 5000m.

Tommy Skipper posed for a photo with me after his victory in Sacramento in 2006 - and again this evening. 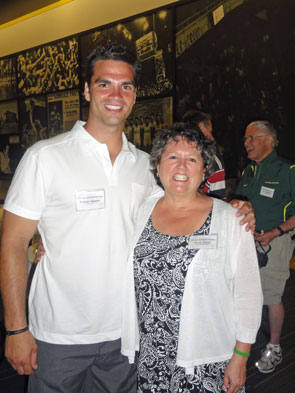 We tried to recreate the pose! Such fun and what a wonderful young man. Mr. Skipper is married to another Lame Duck - hurdler Amanda Santana - and they own a gym in Eugene. The Skipper family have a tradition at the University of Oregon. Tommy's brother, Art, threw the javelin for the Ducks (1992 NCAA Champion) and Oregon hammer thrower, Greg Skipper, is Tommy's nephew.