TrackTown, USA: It seems we have been here for a month and that we have been watching people run around in circles for eons, but this was only Day 2 of the Championships. Getting into a routine, watching amazing college athletes, catching up with old friends and Dave's teammates. The weather continues to cooperate. 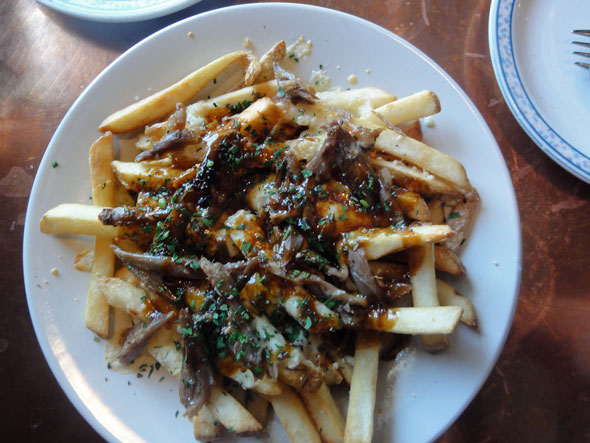 Though I warned of no food photos this week... before the meet today, we had lunch atrye. We were a bit skeptical as the building used to house a total dive bar frequented by one of our friends. It was the place you would go for a cheap flat beer. Then it became a restaurant and then (I think) it became another restaurant and now it is a fabulous place - totally unrecognizable from the beer joint of the past. The menu is very ambitious and they are all local/organic/sustainable and you know I just love that in a restaurant. Not only that, rye has a poutine appetizer. And not your regular poutine - this heart-stopper has fries, cheese curds, duck confit and is topped with a duck demi-glace. Come to Mama! 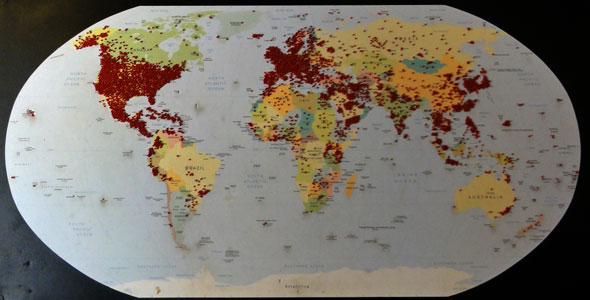 On the way to the track, we stopped to a toy store in the 5th Street Public Market. On a wall, I discovered a map where visitors had left a maroon pin on the location of their home. Isn't that fun? We also found what we were looking for at the Elephant's Trunk, a recycling truck made by Green Toys

for our little guy who is fascinated with garbage trucks. This cool toy is made in California entirely from recycled milk jugs.

We were now ready for an afternoon of The One True Sport.

We watched most the meet from our seats in the grandstand, but Mary, Kathy and I moved to the Bowerman Building to watch the men's 1000m final and the decathlon 1500m. The Bowerman Building sits on the corner of the final straightway. On a normal day it holds offices and training facilities for track & field athletes. During a track meet, the building is used to host assorted University, TrackTown USA, Oregon Track Club staff, donors and friends (i.e. food and drink). 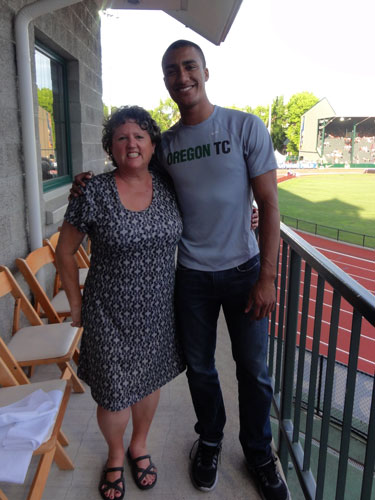 Ashton Eaton (and me)

The WGA was in the house! What was the World's Greatest Athlete, Olympic Gold Medalist and Decathlon World Record holder talking about? He was describing our motorhome to his friend. (Ashton has twice attended our football tailgate party.) According to Ashton Eaton, our RV is "massive and has TVs popping out everywhere, even in the bathroom." We certainly do not have a TV in our bathroom, but I really enjoyed the young man's descriptive skills.

We teased him quite a bit and when Eaton posed for the above photo, we asked "who is the guy in the picture with Terry Taylor?" Then the joke was on me - I asked him to stick around because DT was giving out the awards for the men's 10000m. Eaton said he was sticking around because he was giving out the awards for the decathlon. (Of course he was - oh goodness, can you even imagine how excited the winners were to receive their prize from the WGA???) Mary gave him a parting zinger: What? They couldn't find anyone else? Though we do make an attractive couple if you crop me out of the photo, Ashton is set to marry his lovely fiancee, Canadian Heptathlete Brianne Theissen, next month. 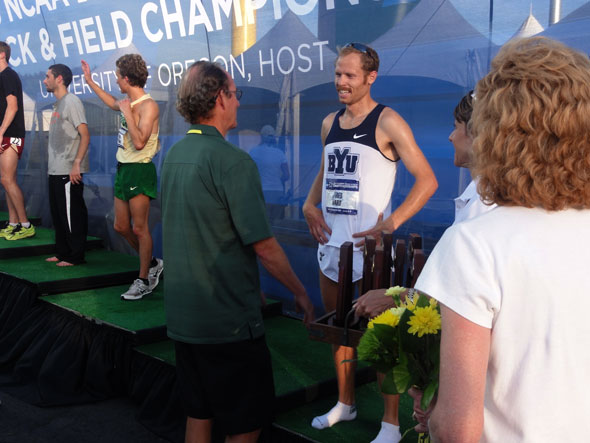 Dave ran the 10000m at the University of Oregon, so has first-hand knowledge of what these eight men had just suffered through. Dave said he and Jared Ward discussed why, exactly, anyone would ever do such a thing? Jared was 8th in the NCAA Championship and scored one point for BYU. My Driver continued down the line, handing each scoring racer an award (including to 6th place Duck, Parker Stinson) before giving an award and a bouquet of flowers to NCAA Champion Lawi Lalang from the University of Arizona (via Kenya). Lalang scored 10 points for UA, finishing in 29 minutes, 29 seconds. 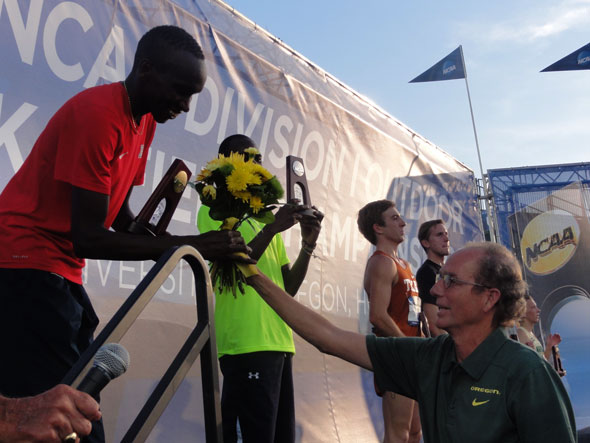 The final event in the decathlon is the 1500m. It may as well be a marathon. The men are so tired after competing in nine other events over the past two days. Their legs feel like they are made of cement. Sometimes a decathlete has to improve on his very best time ever to score enough points to win. Sometimes he knows an easy jog will clinch the title. It's all about the points. The 2013 NCAA Decathlon Champion is Johannes Hock of the University of Texas (via Germany). Hock and second-place finisher, Jeremy Taiwo of the University of Washington scored high enough to qualify for the World Championships in Moscow this August. 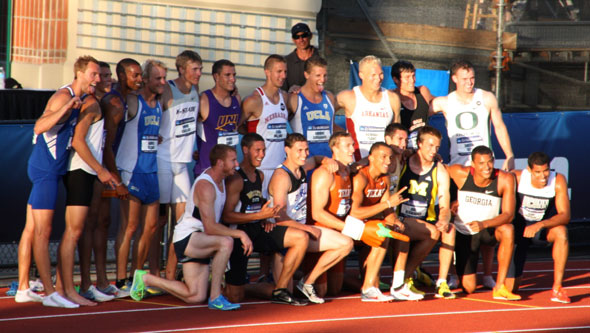 It is tradition that all the decathletes take a victory lap together and it is not uncommon for them to jump in the steeplechase water hazard if the weather cooperates. Mary snapped this fun photo of very tired young men. Will one of these men one day become the World's Greatest Athlete? 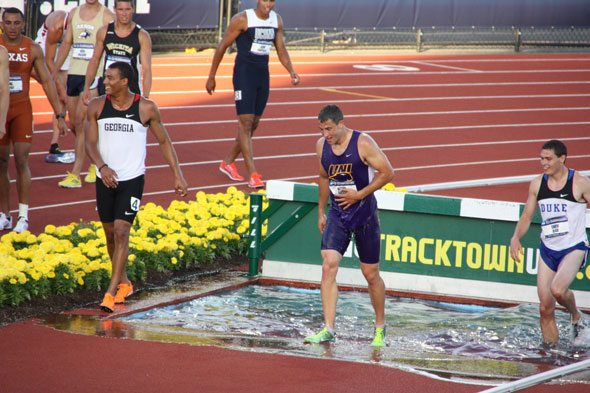 No more prelims. No more heats. From now on, every event is a final. Go fast, or go home.

Until my next update, I remain, your amazed correspondent.