TrackTown, USA:  The weather was not promising, but we did not need to be to Historic Hayward Field until late afternoon, so Dave, Steve, Mary and I drove up to the King Estate for a lovely relaxing lunch. We had a walk around the property and were luckily in the dining room by the time the sky opened to a torrential downpour. 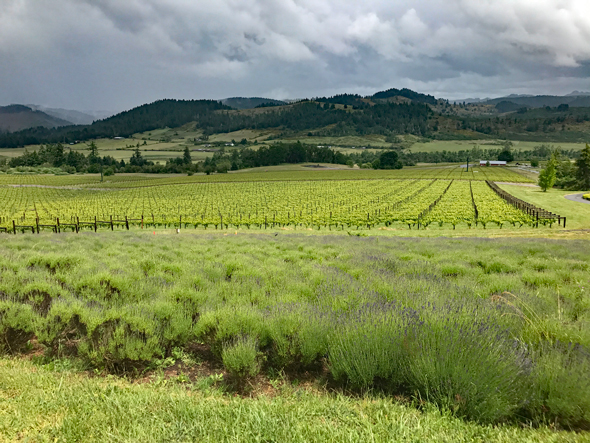 Ed King and the King Estate winery have been very generous supporters of The One True Sport for many years. King Estate hosted events for the Olympic Trials in 2008 and 2016. The King Estate Vineyard is situated about 30 miles outside Eugene in a spectacular hilly setting. The property is not only a working vineyard, but has a restaurant and spaces for events large and small. The views! The landscaping! The Pinot Gris! 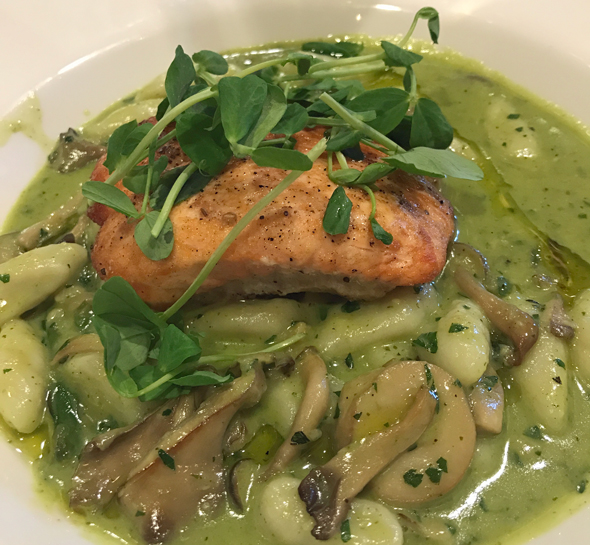 Steve and I ordered the wild-caught salmon in a green pea/mint puree with wild mushrooms, asparagus and potato gnocchi - garnished with pea shoots. Wow! 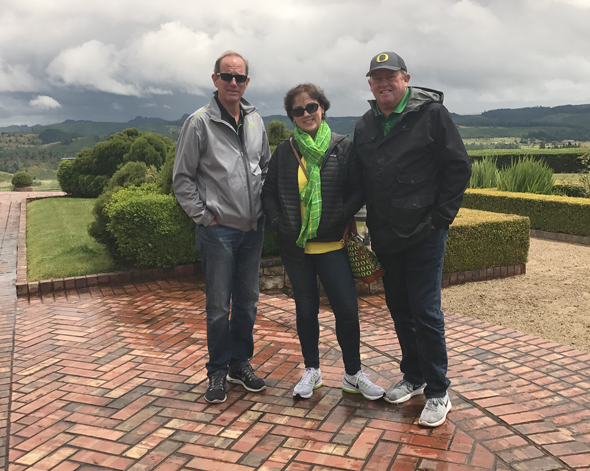 DT, Mary and Steve at the beautiful King Estate Vineyard

As I said, we saw/heard a terrible storm during our meal. The sky grew black and it rained so hard, gallons of water were cascading off the roof in a spectacular show of Mother Nature. (Mary and I quietly sipped King Estate bubbly during the shower.)

By the time we returned to Eugene and walked to the track, the sky was merely threatening, but we learned we had just missed a big hail storm at Historic Hayward Field. One thing not welcome at a track meet (where athletes are throwing metal spears, balls, discs, pole vaulting and running through steeplechase water hazards) is lightning. 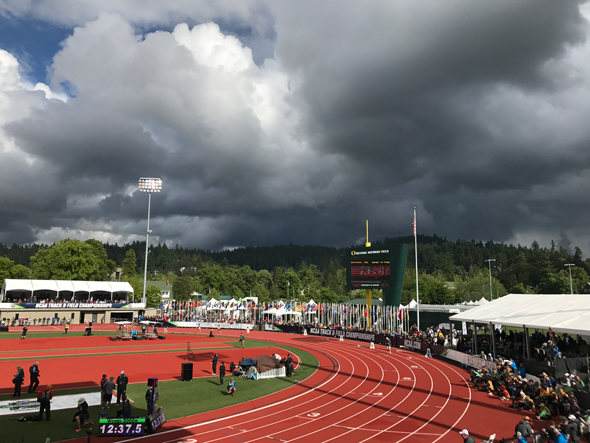 The events progressed over the evening. The Ducks were looking very good to win the NCAA title. Then disaster struck when junior sprint sensation Deajah Stevens stumbled just a few feet from the 200m finish line. Stevens tripped, fell, and - splat - did not finish her race. She was later officially disqualified. The entire stadium fell silent. Everyone was doing math-like-mad in their heads, figuring if this meant the Ducks could no longer win the championship title. Oregon sophomore Ariana Washington (who won the 200m final last year) finished in second place in 22.39. Kyra Jefferson, Florida senior, won the race in 22.02. FAST.

But the night belonged to Olympian Raevyn Rogers. First, she killed-it in the 800m, winning in 2:00.02. Duck junior Brooke Feldmeier was third in 2:01.32. The 800m gave the Ducks 16 lovely points (learn how track and field championships are scored). 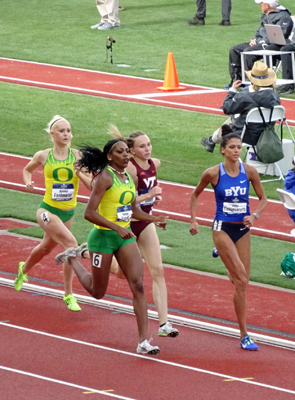 As it often happens, the entire fate of the championship came down to the final event, the 4x400m relay. The Ducks had to win the relay to win the meet. Seems simple enough, but the relay is a whole-nother beast. As seen from yesterday's hand-off photos, anything can happen. The hand-off zone is a crazy mess of confusion and it all happens so fast! Batons can be dropped. Passes cannot be accomplished within the permitted space. Racers can trip. These horrible things happen just as often in high school track meets as in Olympic finals. There is no rhyme or reason to the mystery of the relay race.

A brief re-cap of the 4x400m relay in hand-off photos:

In the Green & Yellow: first leg Makenzie Dunmore hands-off to Deajah Stevens
(in braids, who had fallen just a few minutes earlier in the 200m final!). 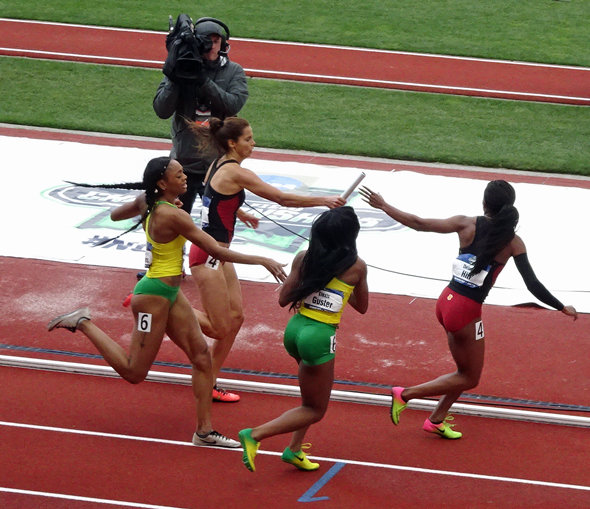 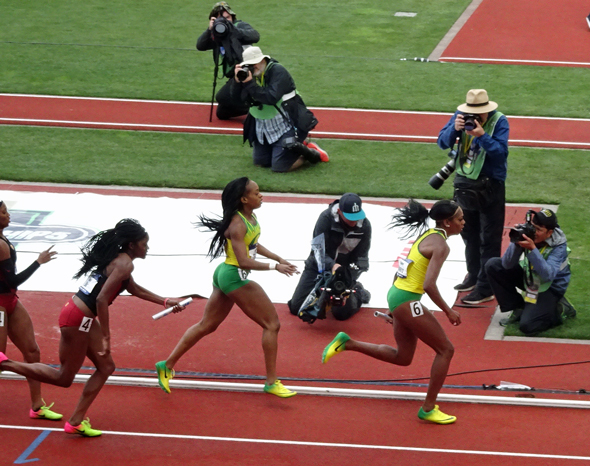 Note how close USC's Kendall Ellis (hip 4) is to Ms. Rogers! The two women fought a crazy-fast battle for one last lap around the track, with Raevyn Rogers blasting past Ms. Ellis on the back curve and powering to remain in front of the talented USC sprinter and lead the Ducks to an amazing victory. The crowd erupted! 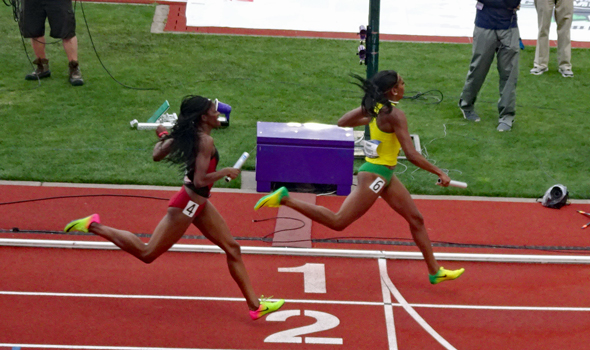 It was a very close race, but the Ducks won in 3 minutes, 23.13 seconds. It was a NCAA record, NCAA championship record and Hayward Field record time!

Not only did they WIN - the Women of Oregon became the first school to ever win the Triple Crown by capturing the national cross country, indoor and outdoor track and field titles in a single season. What an amazing group of women. 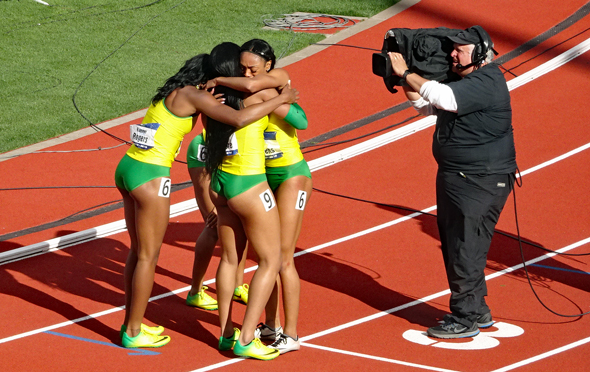 I would love to tell you about how we stuck around for the victory ceremony and celebrated with the team and coaches... except about five minutes after the 4x400 finish, the stadium was evacuated due to a terrible lightning storm. Evacuated! Steve and Mary evacuated to their car and drove back to Portland. Dave and I evacuated to the law school building across the street from the track (it is a brick building and we felt safe... and it was super quiet with diligent law students prior to finals). After the storm calmed, we walked back to our hotel after learning there would be no medal ceremony. The awards were simply handed-out to the athletes so they could all get to safety quickly.

Anti-climatic ending to a very exciting day. No matter. The Ducks won the meet and captured the Triple Crown. Hayward Field magic, once again.

I apologize for my passionate use of exclamation points in this column.

Until my next update, I remain, your over-joyed correspondent.