TrackTown, USA:  Another dark-sky day! Rain in the morning. We didn't have to be to the track until 4p, so spent a leisurely day - out to a nice lunch at the Excelsior Inn, followed by a nap (one of us) and needlepointing (the other one of us). Mary and Steve arrived late afternoon and we walked over to the track together.

A very exciting program this evening - all finals - for the conclusion of the men's competition. Tennessee's Christian Coleman won the 100m and 200m, but as he took his victory lap, Coleman never acknowledged thousands of (standing, cheering, clapping) admirers in the grandstands. He didn't smile, wave or nod. Coleman just kept on walking. I do not know if he was shy or rude, but it was completely odd behavior and no way to win-over a Hayward crowd.

But today belonged to the Florida Gators. In their attempt to beat favored Texas A&M, they kept racking-up points with wins in the high hurdles, 400m hurdles and the triple jump. 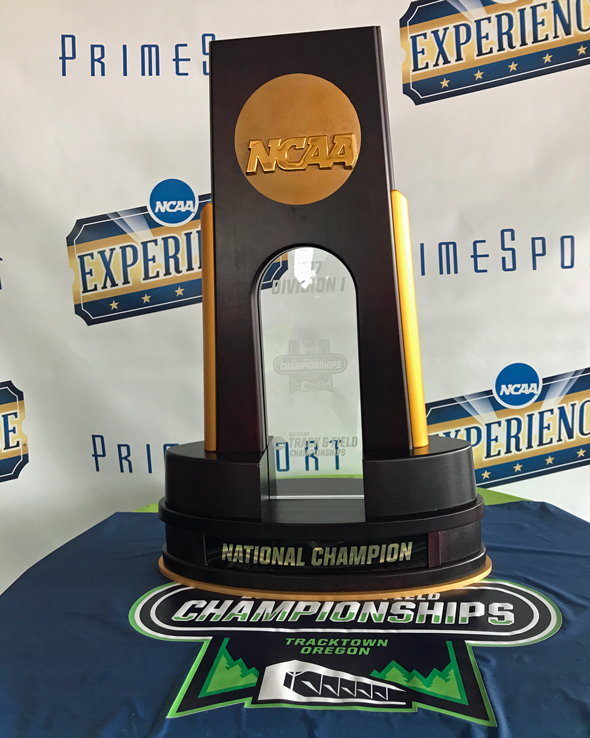 The men were fighting for the NCAA Championship trophy - conveniently on display in the hospitality tent.

As always seems to be the case, the championship would be determined by the final event - the 4x400 relay. If the Gators could get fourth-or-better, they would clinch the title. Near the end of the meet, a steady rain began to fall. 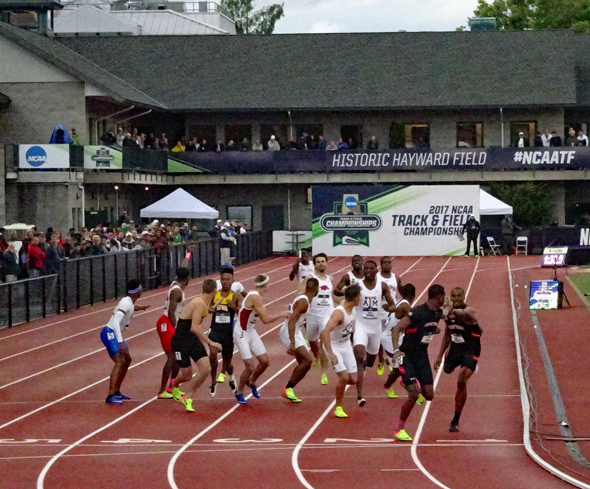 Hand-offs are a scary, fast-paced, jumble of confusion through the eyes of a fan. I assume the racers know what they are doing. Texas A&M won, but it didn't give them enough points to beat Florida. Florida came in 3rd and jumped for joy - hugging each other - knowing they were national champions. (Yes, they are huge athletes with bulging muscles, but they are still college kids.) The Thrill of Victory! Florida's team won with 61.5 points, Texas A&M earned 59.5, and Virginia was third with 36. Oregon men made 19.5 points to finish ninth.

As is customary during a big meet, the University of Oregon track alums, known as the Lame Ducks, get together for a reunion. Tonight 150 people attended the event. It is a time to catch-up with old friends, re-tell old tales and share camaraderie. The group donate to a scholarship fund. For the past four years, Edward Cheserek, the most gloriously titled NCAA distance runner in history, has been the recipient of the Lame Duck Scholarship. King Edward, injured, and not competing in the championships, will graduate in a few weeks. 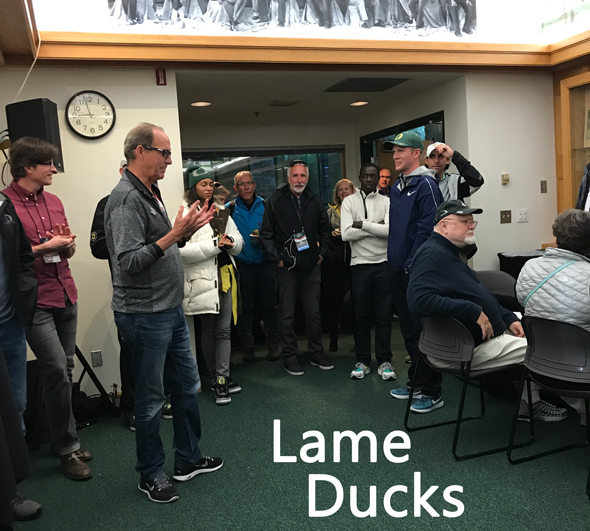 There wasn't really a program at the reunion, but DT thanked everyone for coming, for contributing, and introduced Edward Cheserek (in the white jacket, arms crossed) to the group. There were nibbles and drinks. Some bragging. Memories recalled. Grandchild photos shown. It is an interesting group of very interesting people. I met a man who was on the Oregon track (shot put) and football teams. He played in the 1958 Rose Bowl. And I met runners who had recently finished college. Keep coming to the Lame Duck reunion and keep donating to the scholarship fund.

Another great day of sport. Tomorrow we do it all again as the Women of Oregon fight for the NCAA title. It is within their reach. GO DUCKS!