TrackTown, USA: We woke to cloudy skies and cooler temperatures. Ugh! Not good conditions for the athletes. (Or fans.)

Since the events didn't start until late afternoon, we drove up to the King Estate winery for lunch with friends, Louise and Bob. Fresh salmon was on the menu today, so Louise and I both indulged: 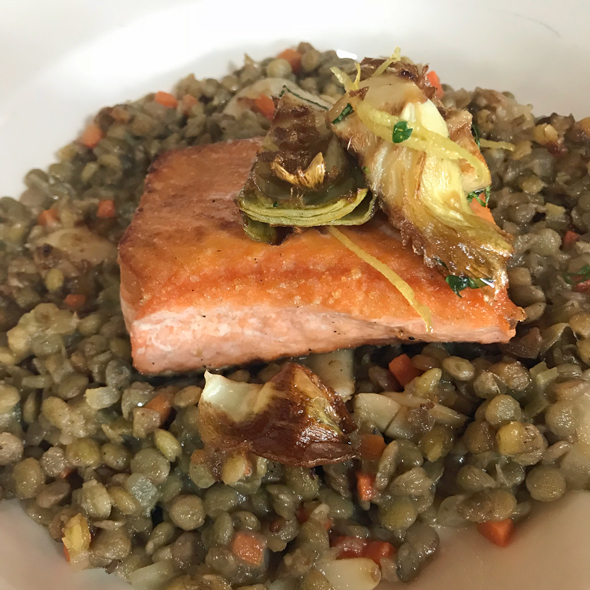 The fillet was on a bed of veggie-rich lentils, and topped with fried artichoke hearts. 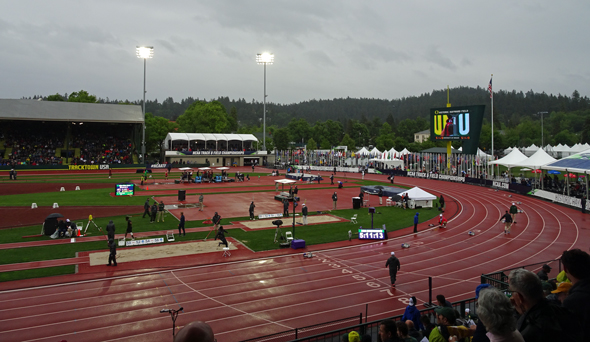 By the time we arrived to Historic Hayward Field for the races, the sky was dark and was depositing a steady drizzle. 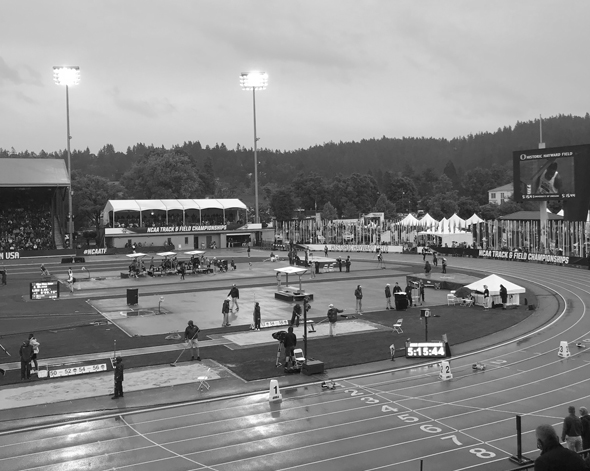 Today was the final day of the men's competition and every event was a final. The Fighting Ducks came away with a lowly 8 points, one of their lowest scores ever, by picking up 3 points from Sam Prakel (6th in 1500m), and Craven Gillespie, placing 4th in the 100m, for 5 points. 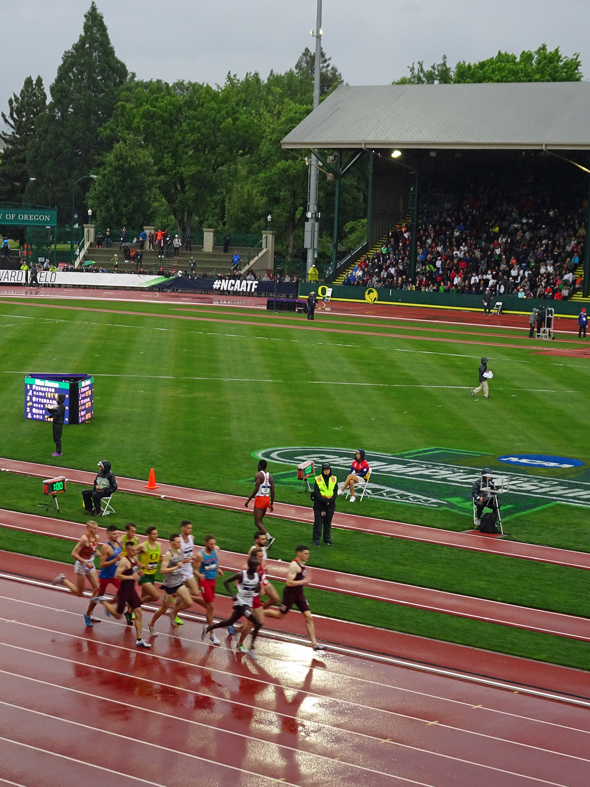 Craven Gillespie, Oregon, lines up for the 100m final

So, maybe things weren't going so well for the Ducks. This doesn't mean there wasn't a lot of excitement on the track.

In the 100m, Cameron Burrell (University of Houston) won in 10.13. Remember this name. Burrell's mother is Michelle Finn-Burrell, who was on the gold-medal 4x100 relay team in the Barcelona Olympics, and his father is Leroy Burrell. Leroy Burrell twice held the 100m world record and has a gold medal from the 4x100 1992 Olympics. Leroy Burrell is the head coach at Houston. 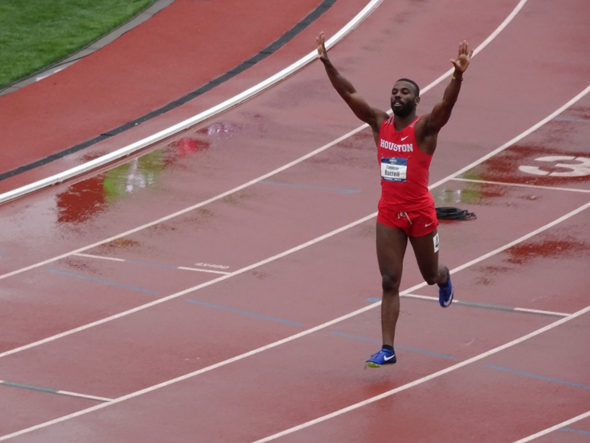 More excitement: Michael Norman, USC, won the 400m in 43.61, breaking the NCAA and Historic Hayward Field records. In the 400m hurdles, USC junior, Rai Benjamin became the second fastest man in the world by running 47.02 - smashing all sorts of meet and NCAA records at the same time. In the last event, Houston (Burrell ran the 4th leg) smashed the NCAA record by winning the 4x100 relay in 38.17. Fast times!

After the meet, past Duck track team members met for their annual Lame Duck Reunion. It is always fun - food and drink, everyone telling the same old stories, and welcoming recent grads into the fold. The University of Oregon coaching staff always stop-in to say hello and it is enjoyable night for all... even though it was pouring rain outside (we were under cover). As usual, DT was somehow wrangled into being the emcee. 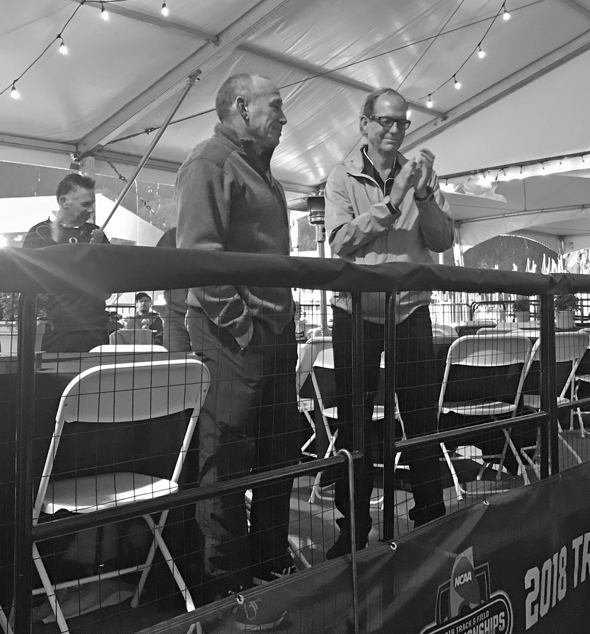 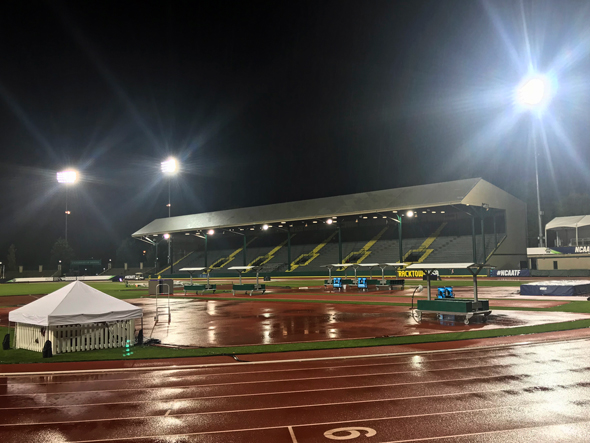 Please take a moment to enjoy this shot of the 100-year-old wooden bleachers at Historic Hayward Field. This venue was originally the football field. The stands are iconic, but they are rotting and have none of the safety features required these days - handrails for instance. At the end of the month, the stands will be razed. The grandstands on the opposite side of the track will also disappear. Something new will rise: 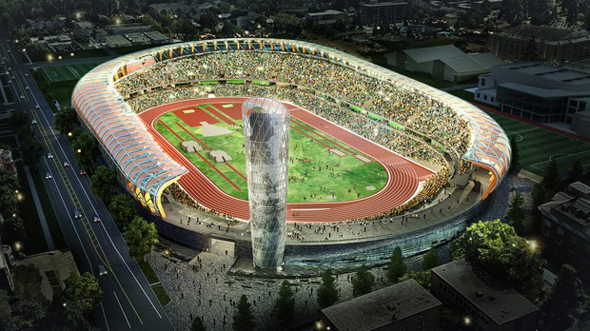 Hello! The venue can change, but the magic will be the same. Except this time the fans get seat-backs, elevators, more than five toilets, and hand-rails. The athletes (who have won countless NCAA Championships titles for the school) will get the best training and locker facilities in the country.

TOMORROW: If the planets align, the Women of Oregon have a good chance of winning a spot on the podium. It's on TV. GO DUCKS!