TrackTown, USA:  I know we are in the middle of a fantastic track meet, but there was a major event in Leo's life today - he graduated from kindergarten.

Leo is the best. We love him so much and are so proud of him. Too cute.

The next thing on this blog agenda involves birds. Osprey. 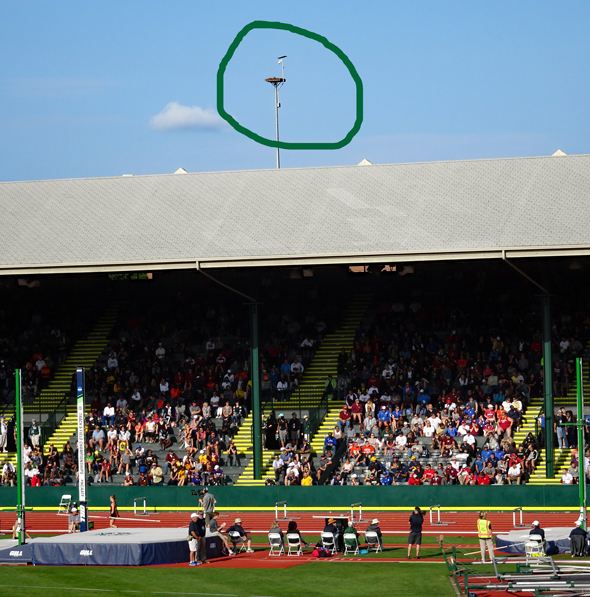 A few years ago, a pair of Osprey built a nest atop one of the light poles at Historic Hayward Field. As Oregonians, no one wanted to mess with the nesters, but they made a heck of mess along the concourse at the track stadium, and the nest mess (and droppings, and the occasional trout dropped on the track) were a bit of a concern to the athletes practicing, and the audiences attending the events. There was also the worry that the noise from the meets (starting gun and crowd noise) could upset the hatchlings... and then there was also the fear the field light heat could actually cause a fire in the nest. (Osprey nests are not made with grasses and moss. They are made with branches. Basically, kindling.) Finally, it was decided to physically move the nest, after the babies flew the coop, a few hundred feet across the street to an area above the University of Oregon Law School. Now the birds are happy as clams and reproducing like it is their job, and track fans no longer need to worry about the eggs being hard-boiled by stadium lights. The law school has even installed a nest-cam, which you can watch 24/7/365. (FYI: the UO Law School is about 1/4 mile - as the osprey flies... LOL... from the Willamette River - a major food source for the birds. Trout. Salmon. Etc.)

A beautiful for a track meet

Back to our regular program:

All women's events today, and the ladies from Louisiana State University started the meet with a Historic Hayward Field record in the 4x100 relay heats. LSU ran four women around the track in 42.09 seconds. (For comparison, the world record for men is 37+ seconds.) After nearly blowing the second hand-off, the Duck women won the 3rd relay heat in 42.95, the second fastest time, to qualify for the final Saturday. GO DUCKS!

Duck sophomore Jessica Hull progressed to the final by placing second in the 1st heat of the 1500m semi. Oregon Junior, Alaysha Johnson, was second in the first heat of the 100m hurdles (12.70) to advance Saturday. In the 100m, Duck Ariana Washington progressed in the 100m sprint, finishing third over-all in 11.08. The women in front of Washington, Aleia Hobbs (LSU senior) and Shania Collins (Tennessee senior) finished under 11 seconds, becoming the 6th and 7th collegiate women to ever run 100m under 11 seconds. Way to finish-off your collegiate careers, ladies!

Duck sophomore Makenzie Sunmore moved on to the 400m final, Sabrina Southerland, (senior, Oregon) advanced to the 800m final, finishing in 2:02.76. Though we had three Oregon women in the 200m, none moved on to the final and our lone entrant in the 10000m failed to finish.

But guess who finished first amongst the 4x400m relay teams? Oh, you are so right! 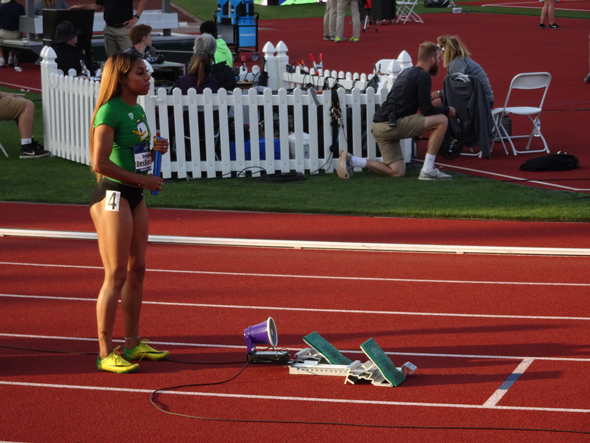 Briyahna DesRosier (Junior) prepares to run leg one of the 4x400m relay for the Ducks. 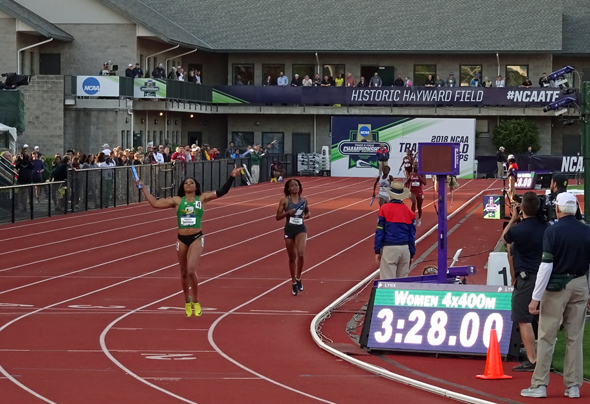 After the meet, my favorite poser posed with the NCAA trophy (which was on display in the hospitality tent). He may be posing today, but he was on two NCAA Championship Cross Country teams with the Oregon Ducks back in the day. 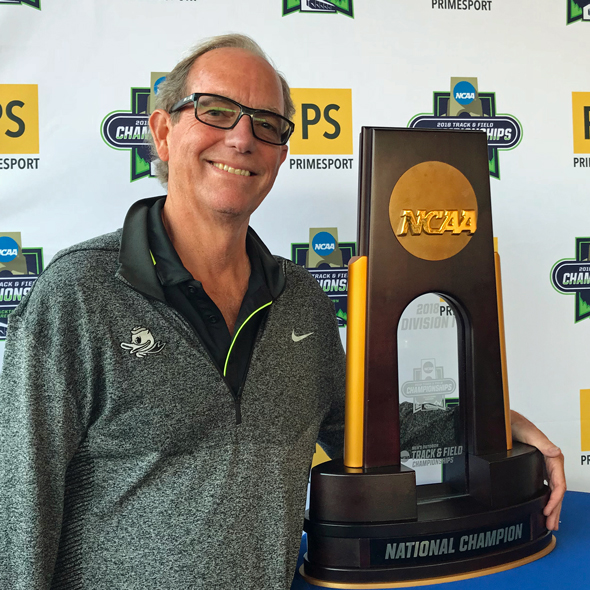 Which school will bring this trophy home?

Tomorrow the men will compete for the final NCAA team and individual championships. It's going to be amazing... and it's on TV: ESPN at 5p (pacific) Friday and at 3:30p (pacific) Saturday. You have a DVR.

Until my next update, I remain, your championshiptastic correspondent.

NOTE: I am not a sports reporter. There were many other events today - even a new NCAA 10000m record. If you want the real news, read the sports section of your favorite newspaper (that actually covers The One True Sport).

* it's a joke. Typo on the Thurday ticket.

You may also like:
Official results here
Photos of Day 2 from the Eugene Register-Guard