TrackTown, USA: The running events on the last day of the track meet did not begin until 3p - and Dave had no meetings scheduled - so we had a bit of a lazy morning, and went to lunch before heading over to the track. We went to the Steelhead Brewery, where we have enjoyed decent food previously, but were really disappointed today: 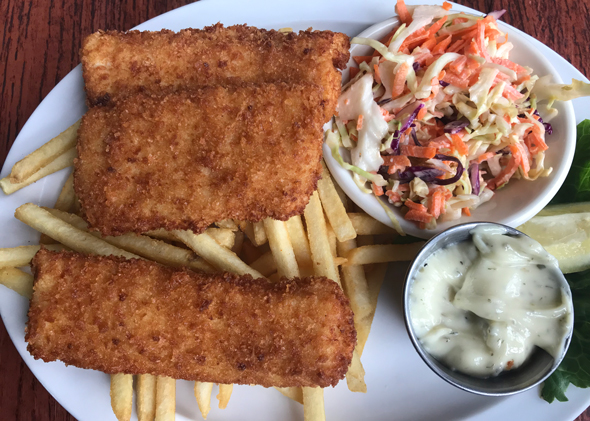 The fish (halibut) was light and crispy, but the fries were limp and the tartar sauce was gummy. Blech. Don't get me started on the soggy, ugly, tasteless slaw.

After lunch, we fetched Mary and Steve from their hotel and drove to Historic Hayward Field in the rain.

The last day of the four-day Championship was the second/final day of competition for the women. Again, the weather was just simply awful. 52 degrees and pouring buckets. Buckets. 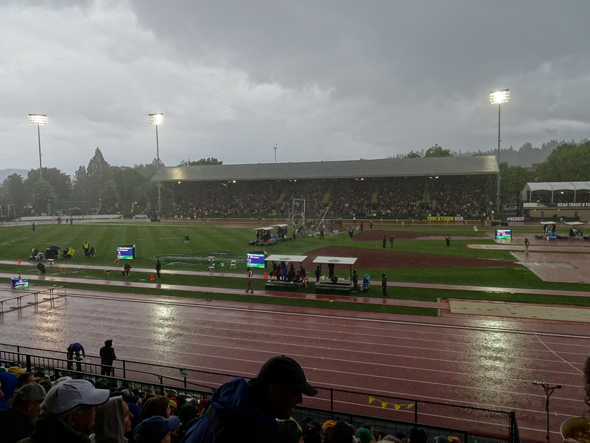 We had a fantasy that the horrid Oregon weather (where the weather is usually not so great) would be a Duck-advantage over the other teams. The Ducks are used to training in these conditions, right?

Wrong. Things went from possibly promising, to cringing in only an hour. 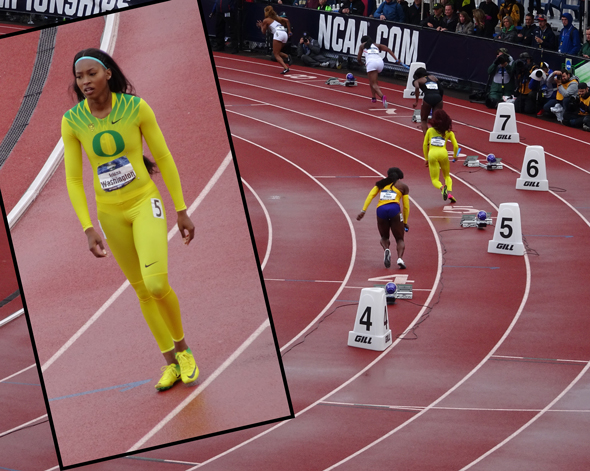 In the first running event, the Ducks entered the stadium in shockingly-yellow body suits... which only a few people on the planet can probably carry-off... young sprinters belonging in the "yes" category. Oregon flew around the track, with flawless hand-offs. The anchor leg, Ariana Washington passed three runners on the home stretch to finish in second place in 43.06. LSU won the relay in 42.25, but they were not as fashionable.

This second-place finish scored 8 points for the Ducks, and the crowd became even more excited when, unexpectedly, Oregon sophomore Jessica Hull WON the 1500m final in 4:08. Won! It seemed promising for the Ducks that they could maybe finish in the top three.

Then things went terribly wrong. A few athletes typically winning (or placing well in) races, came in far behind the leader. And sometimes last. 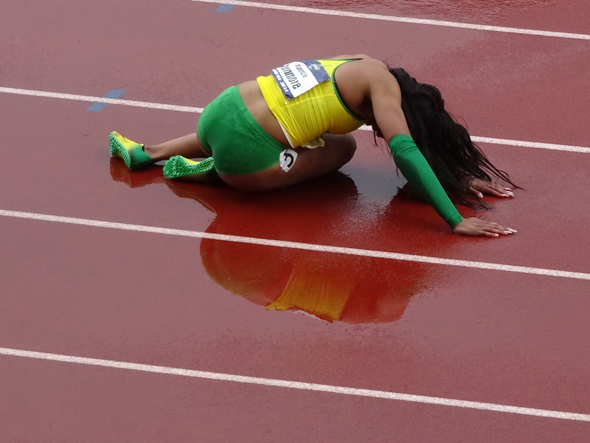 In the 400m (one lap), Sophomore standout Makenzie Dunmore pulled-up on the straight-away as she neared the finish line and fell to the track in obvious pain. The crowd moaned in unison, in sympathy for the writhing sprinter. The other racers had finished, yet Dunmore still was curled-up on the track. The dilemma: she needed to cross the finish line (about 20 feet ahead of her) to score for the Ducks... but if anyone touched her, or helped her in any way, she is disqualified. The poor medical personnel hovered over her, talked to her, wanting to help (it's their job!), but they held back. Dunmore stood and took a few steps, only to fall to the track again. Oh. The. Drama.Finally she stumbled across the finish line and was herded away in a wheelchair. Ms. Dunmore officially finished a full minute after the winner. 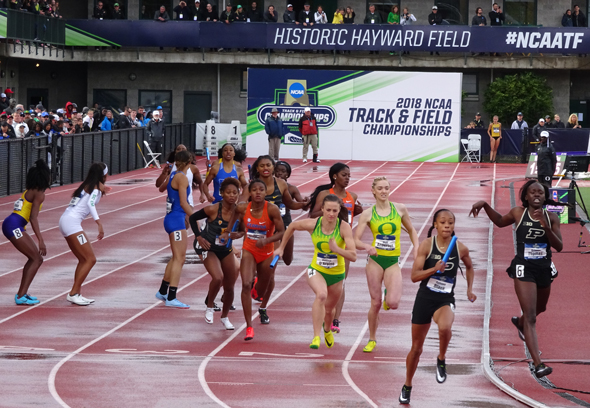 The final race, the 4x400 relay is often a do-or-die event in a big meet. Oregon was out of contention to take the crown by this point, but how a few teams placed in this race could determine which school would win the NCAA title. In one off the most exciting races I have ever witnessed (and I've seen my share), USC came from 5th place at the last hand-off to crush the field in the relay, earn 10 points, and win the 2018 NCAA Championship by one point. (One point doesn't always seem like much, does it... but now you know how important it was for Dunmore to cross the finish line in the 400m, even if she had to crawl.) Georgia finished second with 52, Stanford third with 51. Oregon ended up 7th with 39 points. Of the top ten finishing universities, four were from the Pac-12 and four were from the SEC.

We were chilled to our old bones and quickly left the stadium, taking Mary and Steve back to their hotel and we continued home to Portland. In the rain.

Until my next update, I remain, your GO DUCKS correspondent.
« NCAA Championships: Day 3 When Life Gives You Fava Beans… »