TrackTown, USA:  We woke to an icy cold motorhome. Okay, possibly a bit of an exaggeration. There was no ice at all. After all those months in Palm Springs and after a week of 100-degree temperatures in Oregon, the weather has suddenly turned to 66 degrees. Sixty six. For a high. Not fair and not fun.

Dave and I had a meeting early this afternoon with the staff at the University of Oregon Library. For several years we have funded a unique program where old photographs from the Athletic Department have been scanned, repaired and digitized by the University Library. Athletes are identified and every photo is cataloged. Leadership & Legacy now houses thousands of photographs that can be searched, viewed and purchased on line. There are even photos of My Driver on the website: 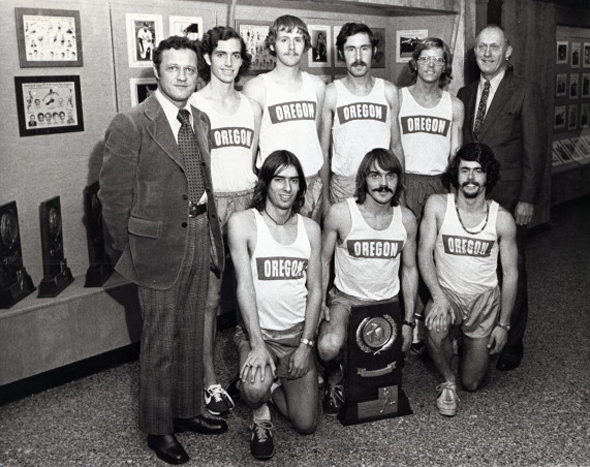 Looky who had been to school for just a few months and was on the 1973 NCAA Championship Cross Country team?

Our meeting today was to learn about another archival project the University Library is undertaking - thousands and thousands of reels of film of Oregon athletics that need digitalizing before they disintegrate. The film collection has reels from 1930 until the world went digital around 2003-ish - old film reels, in canisters. The crew have found amazing stuff, including footage of Duck Jim Bailey (Australia) running the first sub-four-minute mile on American soil at the Los Angeles Coliseum in 1956, a race that included young Oregon runner Bill Dellinger.

The film clip above is NOT the one we saw today from the archives, but just an example of the subjects needing digitalizing and archiving. Interesting fact: while it is important the film be transferred to a digital format, the University will also strive to preserve the original film reels.

Oh goodness, libraries are changing so rapidly. Visit, and donate to, your favorite library today.

After this informative session, we walked to Historic Hayward Field for the first day of the women's national collegiate track and field championships. It was cold. It was raining. The sky grew dark. 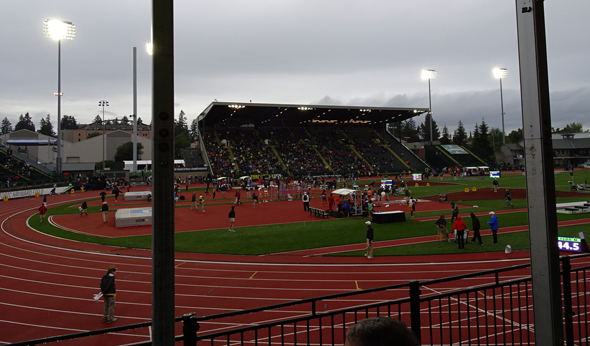 Not going to lie. Though it was a sold-out stadium, there were many empty seats today. Miserable weather? The meet is on television?

We are not wimps, so stuck it out all afternoon... though we did remain in the hospitality booth sipping on sorta hot and sorta strong coffee. It didn't help. We were cold.

There were two NCAA records set this afternoon. Raven Saunders (Mississippi) set a new shot put record at 63 feet, 5 inches. Saunders broke a 33-year-old record (set in 1983 by Arizona's Meg Ritchie). The other record was set by Maggie Malone (Texas A&M) by throwing the javelin 204 feet. Amazing work - and in the pouring rain. 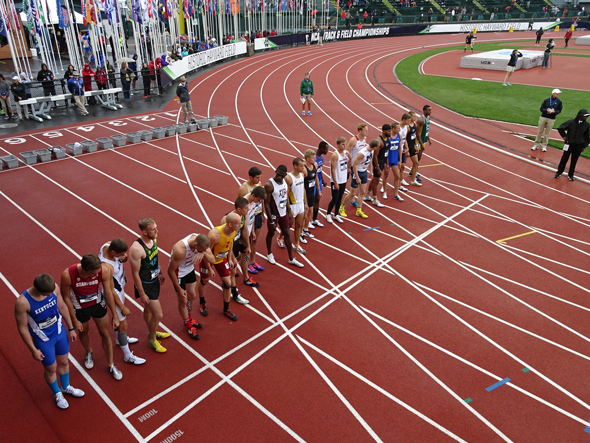 It's enough to make me cry. The decathletes are so brave. So crazy. So strong. I just love this event. Lindon Victor (Texas A&M) is the 2016 NCAA Decathlon champion, with a very high score of 8379 combined points. Zach Ziemek (Wisconsin) followed with 8300 points. Maicel Uibo of Georgia was third, 8294.

While the Oregon Duck women were not 100% favored to win, it was a very good possibility. The Ducks had a very tough evening with an injury to 100m sprinter Hannah Cunliffe, and then... oops... the Ducks dropped the baton in the 4x400m relay prelims. 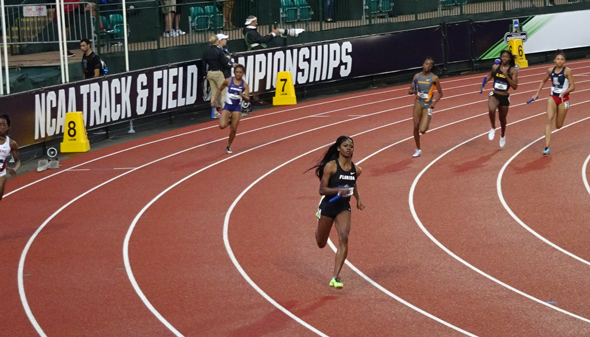 Notice the big empty space in Lane 5? No Ducks in the 4x400m final. Dave was so sad. I'm not going to say it's impossible for the Duck women to win, because anything (and I mean anything) can happen in college sports. Many things have to go right for the Ducks and many things have to go wrong for a few other teams... and I will never, ever (no matter how devoted I am to the Ducks) wish bad mojo on another team. Ever optimistic, My Driver has a scenario where the Duck women can still win the championship. GO DUCKS!

After the races, after 8p, we went to Marche for dinner. 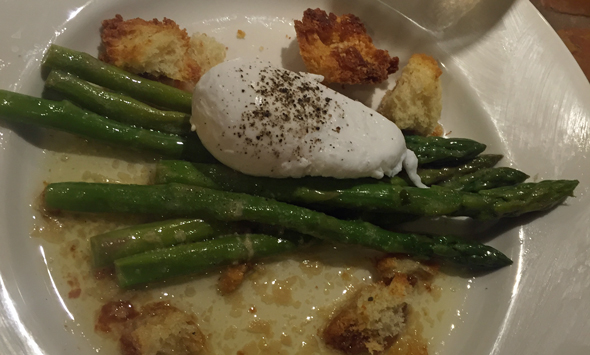 Dave had an appetizer of roasted asparagus with a poached egg 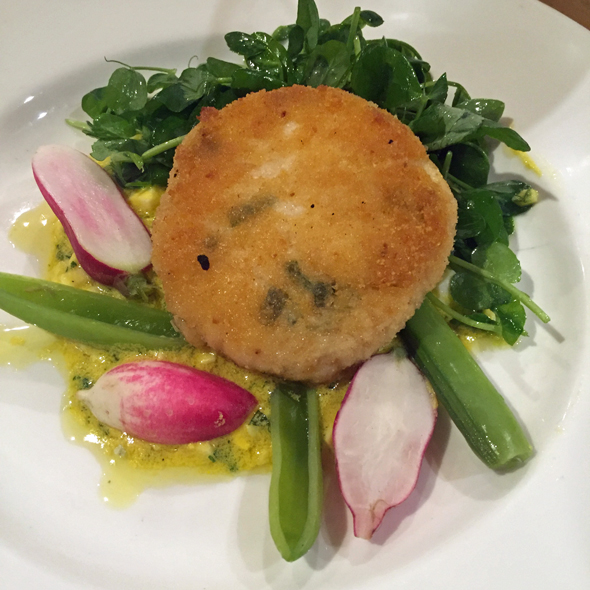 I had a great treat - a fish cake made with a fish I can actually eat: Halibut. 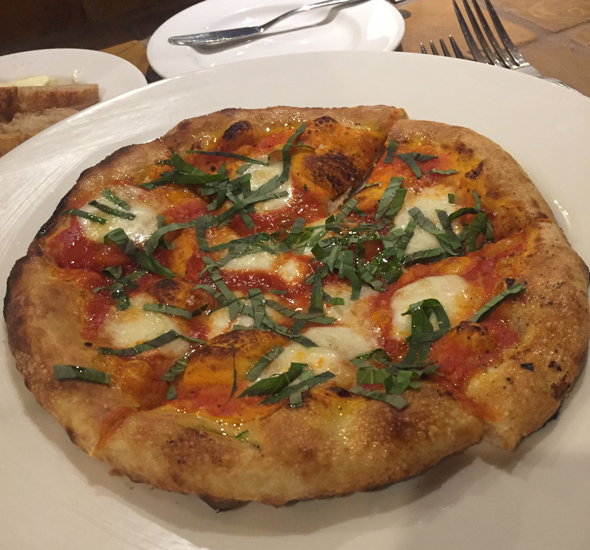 I'm not sure who DT ordered this little pizza.