Red Bluff, California:  I have no other way to describe the past 24 hours or so. After dinner last evening, the wind started to blow. By midnight, it was howling. By two o'clock in the morning, the winds were so strong, I stowed our satellite television and internet dishes. By three o'clock in the morning, we brought-in the bed slide because the wind was causing the awning over the slide to vibrate - making a huge racket. We had a miserable night of little sleep. Our motorhome was rocking in the wind. We tossed and turned all night. Miserable.

The winds were so strong this morning, neither of us exercised. We just wanted to get out of Dodge. The winds were strong as we left town, but the road immediately follows Walker Lake for over twenty miles, and the vistas are so remarkable, it is easy to forgive the wind. 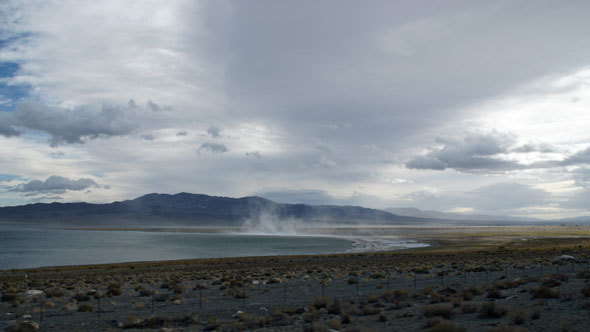 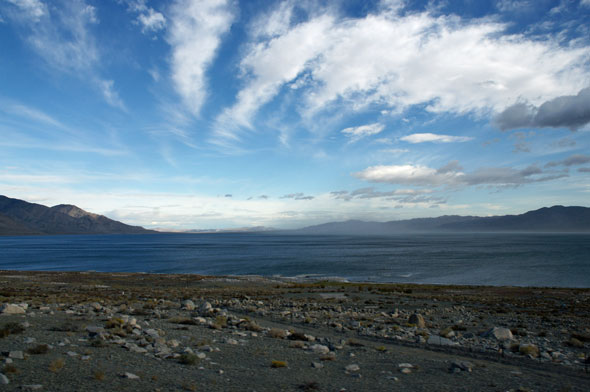 What a way to greet the day!

Please forgive a whole bunch of photos snapped through the windscreen today:

We ended up going through Reno and heading north on Highway 395 to Susanville, where we had several options to cross the Cascades. (Yes, Dear Reader, at Mt. Lassen the Sierra mountains end and the Cascade mountains begin.) We stopped in Susanville, made a sandwich and surfed the web on my phone. We checked the Caltrans website. Passes that had been closed earlier in the day were now open, so we chose the pass-o-least-elevation - Highway 36. 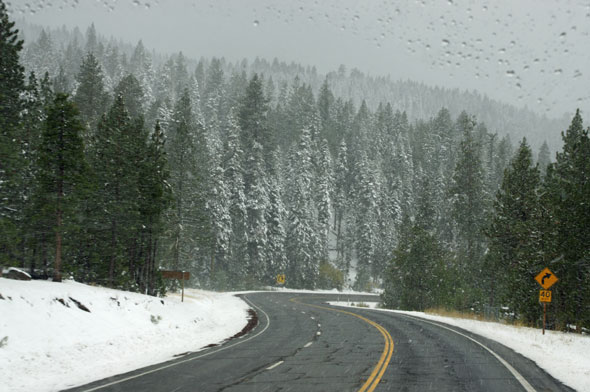 Moments after leaving Susanville, where the road climbs to nearly 6000 feet, the snow started. The outside temperature gauge on RV read low 40's. 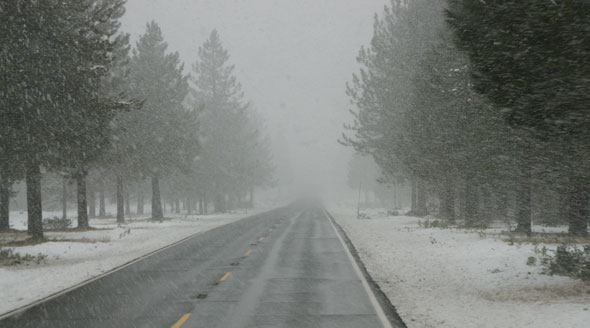 I kept checking the weather and altitude on my phone. We did not see many cars (nor truckers) on this road and were worried we had made a bad decision. I was remembering the nearby Donner Party and wondering how long I could survive on my skinny husband.

Some runners never think of others.

Socially progressive, I could feed a village. 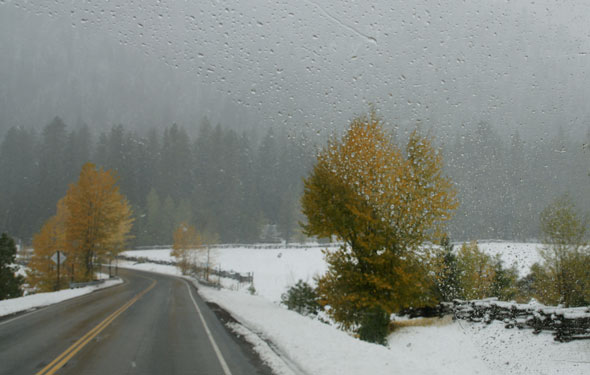 This autumn-leaf vista from the passenger seat was snapped just before we passed the southern entrance to (probably DT's favorite) Lassen National Park (which was, naturally, closed due to snow). 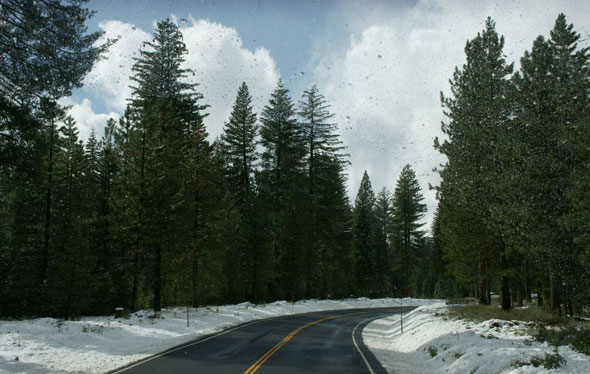 After crossing the pass, the weather seemed to improve (fooling us) for a few quiet moments... only to return to a full-on blizzard until we reached Lake Almanor... where things calmed down a bit at the 4000 foot elevation.

The weather may have improved, but our windscreen was covered with ice and snow: 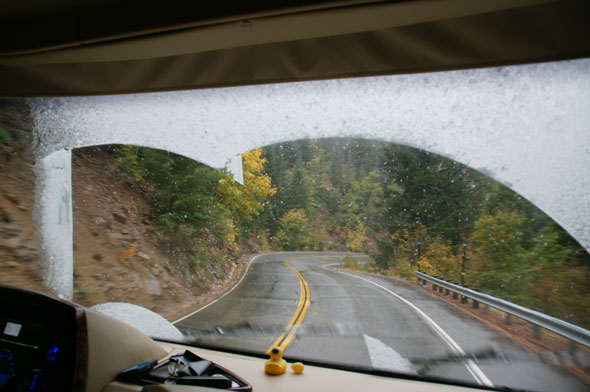 Remember when we settled on those smaller/cheaper The Wal-Mart wipers? Mistake! 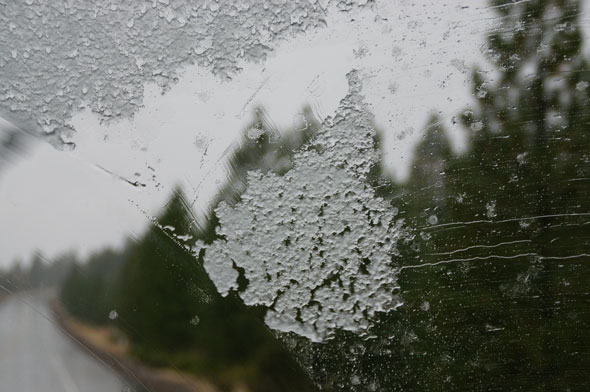 At least we had a pretty show as the snow slipped off our windscreen...

We knew it was all down hill from here. Red Bluff - and a great RV park - awaited. Just as DT started to relax, the sky grew dark. 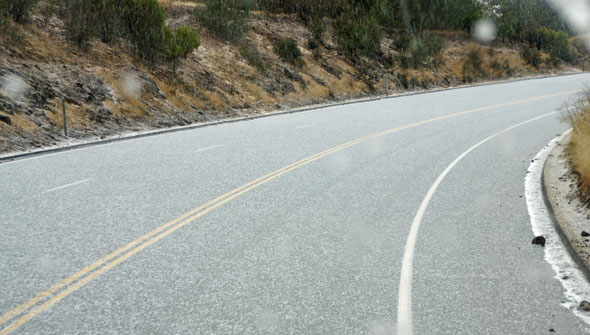 If you haven't driven downhill in a 54,000-pound, 45-foot RV (towing a car!) on a one-inch sheet of frozen ice crystals - well... count yourself LUCKY! The noise from the hail pounding our bus (no damage!) along with the noise of the crackling lightning and roaring thunder... well, let's just say those boys in San Francisco had it easy tonight.

By the time we pulled into the Durango RV Resort, we were simply at the end of our RV ropes. I was exhausted and I was only manning the iPhone. DT is such a trooper to handle the Magna Peregrinus over the longest 300 miles we have EVER traveled.

A miserable day on the road.

We watched the debate/Giants win the National League Series and I made a super yummy and super-easy veggie (Donner Party pun intended) dinner. I put brown basmati rice in the rice cooker with the zest of one lime. (I used the juice of the lime to make myself a much-needed margarita!) I heated a can of black beans with a 7 ounce pop-top can of Herdez Salsa Casera. Then I chopped fresh cilantro, tomato, jalapeno, avocado, green onion and shredded some cheddar. We filled bowls with the rice, beans and the fresh toppings. Great dinner - plus all the leftovers were tossed together and will be zapped in tortillas for lunch tomorrow.

Hopefully to be enjoyed in less-stressful circumstances. 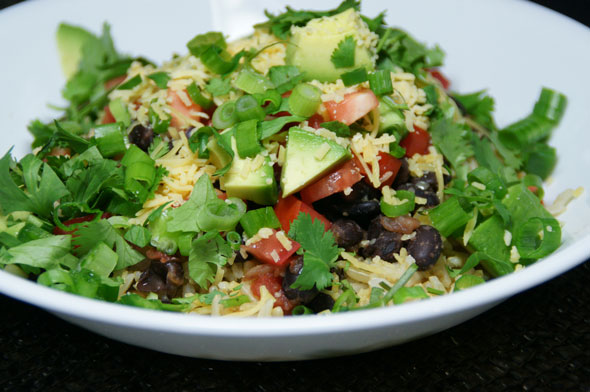 Until my next update, I remain, your vegetarian correspondent.