Hawthorne, Nevada: I will begin with a few Tales from Late Last Night. Where we last left off, DT and I were about to head off to the MGM Grand Garden Arena for a Jimmy Buffett concert. Lenny had been texting me all afternoon, asking if we were going to have our traditional pre-concert healthy snack (truffled house-made potato chips with Maytag blue cheese) at the Wolfgang Puck Cafe in the MGM Grand Hotel. Lenny loves this dish. I told Lenny we should not, as we have been over-indulging for several days. Lenny said we had to have this dish because he had been thinking of the potato chips all day. Sorry, Lenny - the wait was over one hour. We had sashimi instead. 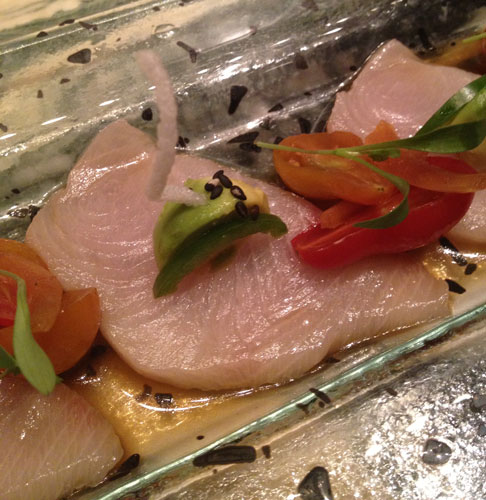 Really, really good sashimi and sushi at Shibuya in the MGM Grand Hotel. We only had to wait a few minutes for premium sushi-bar seats. The menu was fantastic and we were able to order many of our favorite dishes - including yellowtail sashimi with avocado, jalapeno, cilantro cherry tomatoes and ponzu salsa (pictured above). We tried several sashimi dishes and loved them all... but it was time to get our Jimmy on... 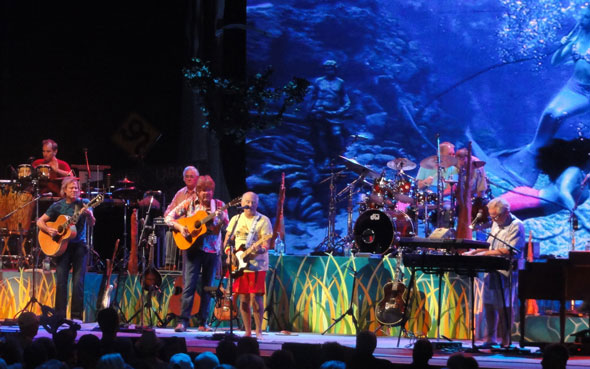 You all know I love me some Jimmy Buffett. Loved him since college and let's face it - that was a long time ago. Before computers. Before cell phones. Even before cassette tapes. Jimmy sings hundreds of song. (I have nearly 300 on my iPod.) I know there is a possibility that I will go to hell for saying this, but not every song in his repertoire is a great song. The thing that keeps Mr. Buffett in Lear Jets is his marketing skills and his band. He has 14-17 (depending on the tour) of some of the best musicians, singers and song writers in America. His wingman, Mac McAnally has been named CMA best musician of the year for the last four years. It is a joy to watch the Coral Reefers play/sing with Jimmy Buffett. 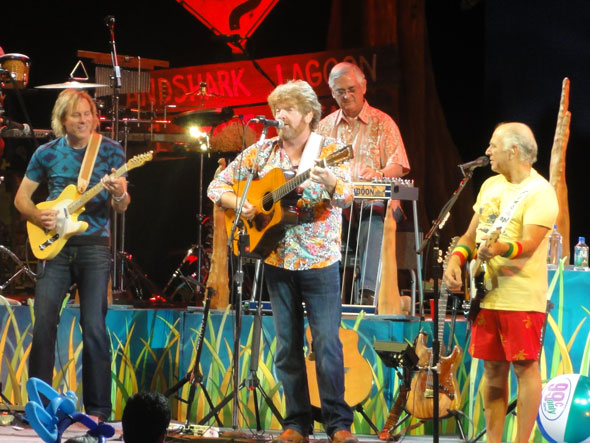 Not to mention, these guys have been playing together for so long, they are practically related. They have been singing the same songs for so long, I wonder how they can even stand it, yet they play "Margaritaville" and "Cheeseburger in Paradise" with true passion at every concert. (They are probably only have to think about their bank accounts to get them in the mood to rock it out.) Still, it must be fun to continue to play to happy-drunk Parrotheads in sold-out arenas across the country... even if much of the crowd are now drawing social security. A marketing genius, Jimmy vends his own brand of beer and tequila at his own concerts!

Tonight, Jimmy told a story I had never heard before. He said 110 years ago he went to a try-out thing where hundreds of bands played before agents, trying to be "discovered". One of the bands that "tried out" were a group of guys called The Commodores. Seems they did alright and Jimmy said he and Lionel Ritchie are friends to this day. 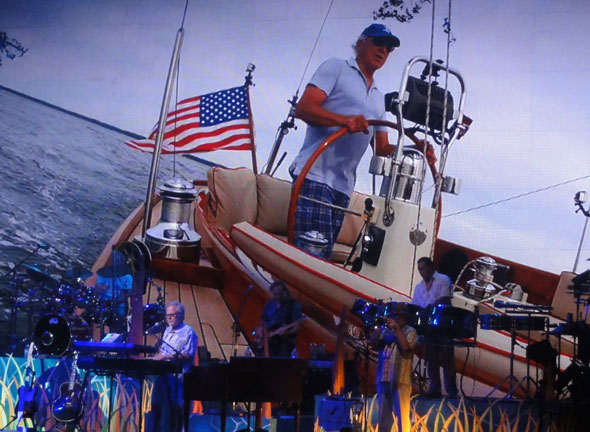 Remember the olden days when they searched your handbag before entering a concert to make sure you didn't have a camera? Ha. Now you walk through a metal detector (weapons?) and everyone in the concert was snapping away like mad and making videos with their phones. Probably the entire show is on YouTube already.

Lisa and Lenny were at their home in Los Angeles, waiting up until I phoned them during "Brown Eyed Girl". They had to wait until nearly the end of the show, but instead of phoning, we facetimed (live video chatted) during the song!

It is good to be a bad-a$$ iOS6-iPhoning Bubbe! 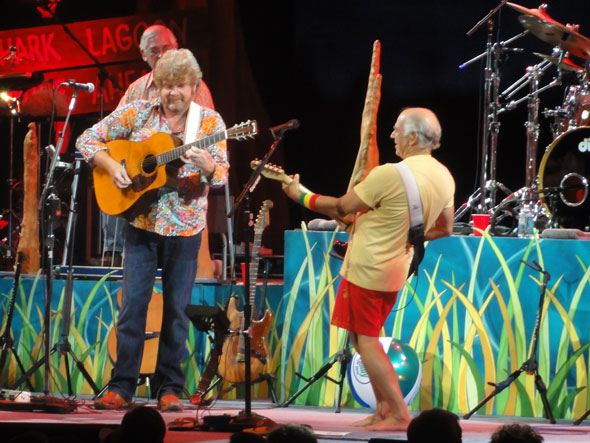 This is my favorite photo of the night. He may be pushing 66. He may have no hair. He may have no shoes. Dude is still rocking it. Another fabulous night with Mr. Buffett. We can't thank Lenny & Lisa enough for this great evening - and great weekend.

But all good things must come to an end. We wanted to head back to our RV, but the taxi lines were miles long. We decided to play the tables for a bit. We had bad luck, so decided to call it a night and wait it out for a taxi.

On a whim, while walking to the cashier (to cash-in our sad remaining few chips), I decided to drop a stack of chips on black to win at a roulette table. Dang, if I didn't win.

We continued to the cashier window, until I decided to drop the fattened stack of chips on black to win at another roulette table. Again, victory was mine.

We continued towards the cashier window... until... you guessed it... I double-doubled our stash and hastily made a retreat before our luck ran out. As Jimmy always says:I'd rather die while I'm living, than live while I'm dead. 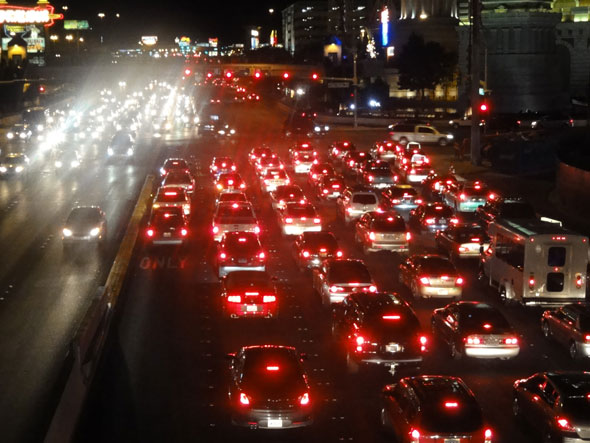 So, after a good sleep, we were up and on the road by nine o'clock, which as you all know is basically the best we can do if you want to get in a little exercise before sitting on your backside all day.

We drove all day, north on Highway 95. DT said he just couldn't stand to hit the major interstates again for a while and it had been years since we had been on this very beautiful route through the Nevada desert. We stopped for fuel about 80 miles from Las Vegas in Lathrop Wells, Nevada. The fueling station is nothing more than a glorified gas station, bar, convenience store... and brothel! 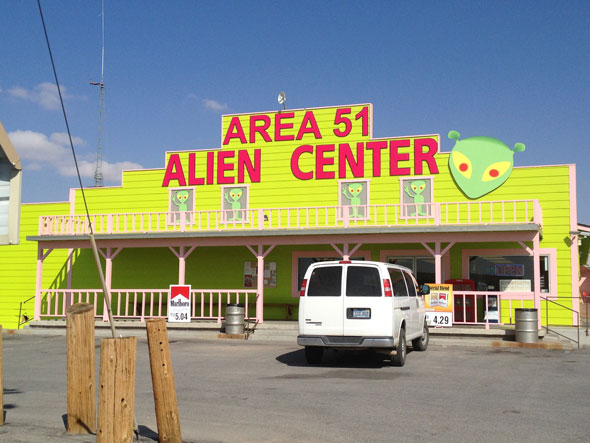 A sign on the door reads, "Welcome Humans" and diesel was only $4.10 per gallon. As you know, we only patronize the classiest spots in America, so you will not be surprised we fueled-up at a gas station that has a brothel open 24/7/365. 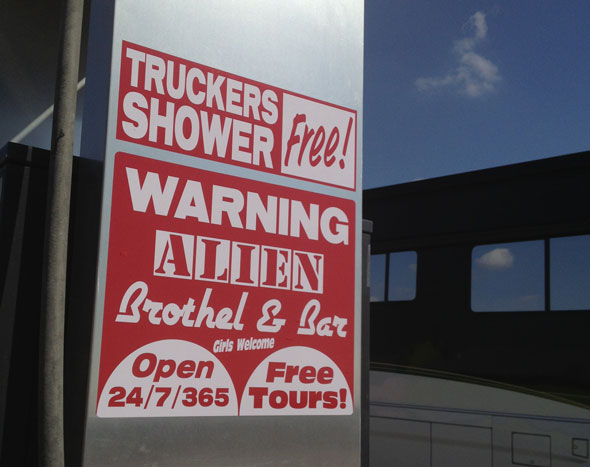 Before you ask, no, we did not take the tour. My favorite part of this sign is the little GIRLS WELCOME at the bottom of the sign. DT thinks for the $445 he dropped at this gas station, something more than a shower should be free. We will never know what it is like to have sex with an alien.

Happily, the rest of our day was uneventful. Just beautiful scenery, smooth Nevada roads (every cent we have ever lost in a casino is worth it - the roads in Nevada are as smooth as glass) and little traffic. We saw vistas like this:

And many dried salt flat/lakes: 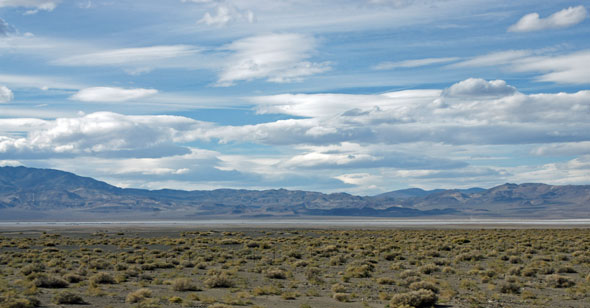 We also saw around 100 wild burros. They were everywhere. We also crossed countless cattle guards on the highway today.

Around 5 o'clock we pulled into Hawthorne and found a campsite at Whiskey Flats RV Park. Our neighbors are fellow Ducks and though we have never met, they are friends with our friends Alberto & Molly. This massive world is so small at times. 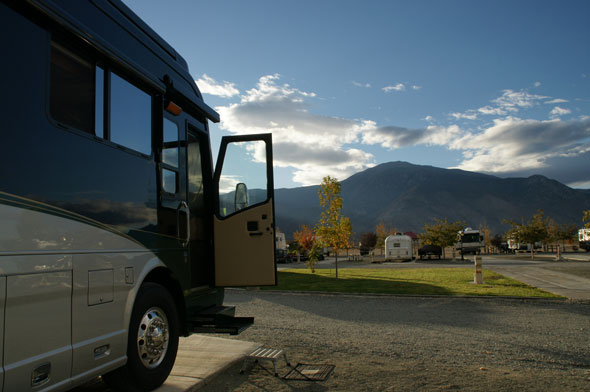 We will spend a quiet evening watching the Giants from San Francisco. I am preparing a delicious Italian vegetarian meal - one of DT's favorites - Spaghetti con Pepe and a tossed green salad.

Until my next update down the road, I remain, your Nevada correspondent.

RV PARK: Whiskey Flats RV Park. 60 long pull-through paved campsites with picnic tables, cable and wifi. Propane, bathhouse, laundry. Close to a large Safeway grocer. Beautiful mountain views. Friendly owner. We paid $24.75 with our Good Sam discount. It has been a very, very long time since we have paid less than $25 for a campsite.