Indio, California: He didn't want to go, and we didn't want him to leave, but there is this thing called school, so we drove Leo back to Los Angeles this morning. We knew traffic would be terrible with all the 3-day-weekenders returning to LA, so we tried to leave early... but Leo wanted to go to the swimming pool. Why not? 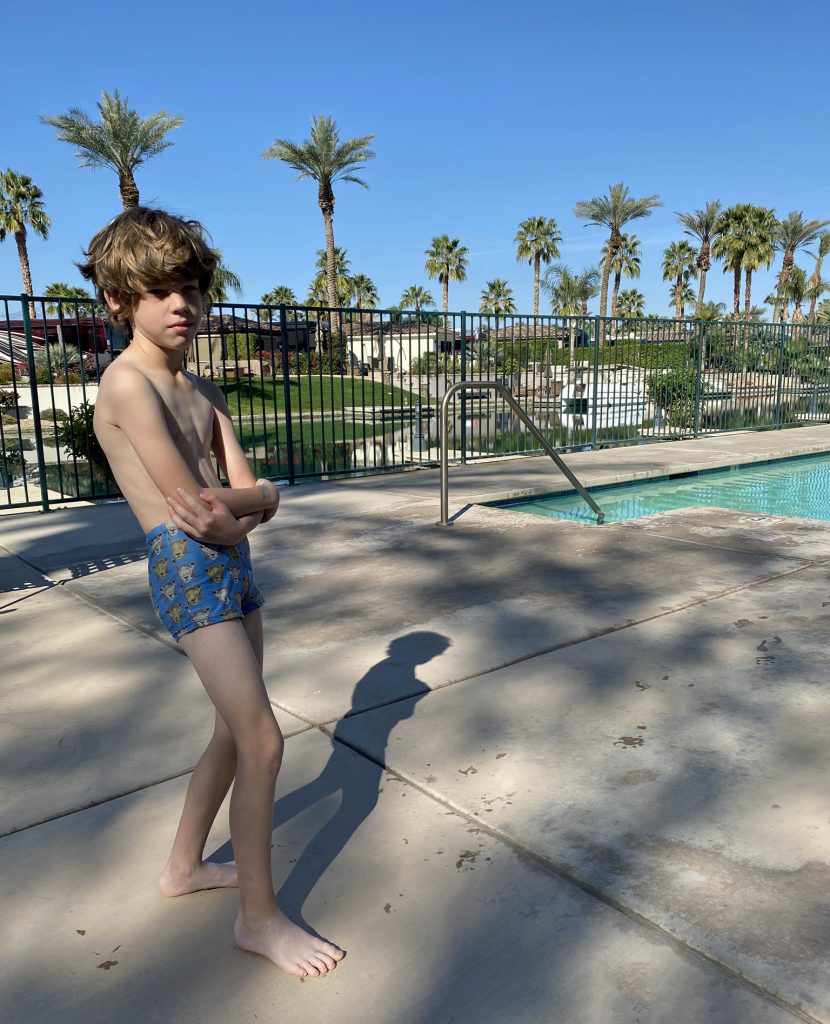 All 46 pounds of him, jumping into the pool. Nothing like the joy of an 8-year-old boy with an entire swimming pool to himself!

I had Leo swim a few lengths, he dove a few times, sat in the hot tub, and tried to squirt me with a water gun. His swimming has improved so much that we no longer have to be in the pool WITH him, but remain vigilant from a lounge chair. Leo is becoming a great little swimmer.

We packed him up, I downloaded a few videos to my iPad, and we hit the highway at 11:30a. It took us FOUR HOURS to make the usual 2 hour drive. Ugh. Leo didn't mind as he was glued to his screen and headset. He had snacks. I was playing Words With Friends on my phone. Poor DT was the sole sufferer.

I told Lisa we were going to slowly drive-by her house, roll down the car window, and throw Leo and all his belongings to the curb to avoid their germ-filled house. I exaggerate, but not by much. We brought-in Leo's stuff (bike!), stayed ten minutes inside the Petri dish and began our drive back to Indio. As much fun as Leo had with us, he was so happy to be home, so happy to see Lucy, and to give her the carnival loot/treasures. Lucy is feeling better, with no fever for two days, but still coughing quite a bit. Lenny is still dragging. Lisa is strong!

The return drive was just over two hours. We had dinner at the clubhouse and called it a night.

Random coincidences? My new California driving license/REAL ID arrived to our mailbox the same day our house closed... and we learned today the couple who bought our house are moving to Portland to be closer to their grandchildren.

Until my next update, I remain, your "planets aligning" correspondent.

« 2020 Riverside County Fair We Are Cruising to Mexico! »