DAY 2 | Track Town USA: After a much-needed 4 hours sleep, DT and I were up and over to Hayward Field, switching-around cars and picking-up/dropping-off items, etc. He went to work and I was able to come back to the motorhome (using my own car!) and get a shower and a little more rest before Rick & Ali (my brother and sister-in-law) picked me up around ten o'clock and we all headed back to Hayward Field.

It was another really (really, really) hot day in Eugene. Rick and Ali were impressed with the facilities for the fans and thought everything just looked so great. That made me happy. We went through security - just a breeze, not even a hint of a line (take that, Sacramento), and walked up to meet DT in the organization office. He was not there, but he had left me a few clues. One, he did not have his hat. Two, he had not logged in to his emails, and three - he must have snapped at someone in the morning meeting, because just walking the two blocks from the entrance to the office, several people had stopped to ask how DT was "holding up". In a few minutes, DT appeared through the door, with a huge smile on his face, and I knew all was well.

The few issues that had come-up on Day 1 had been resolved and things were flowing very smoothly. Fans were absolutely flooding into the Festival and it looked to be another great day of track & field at Hayward Field. 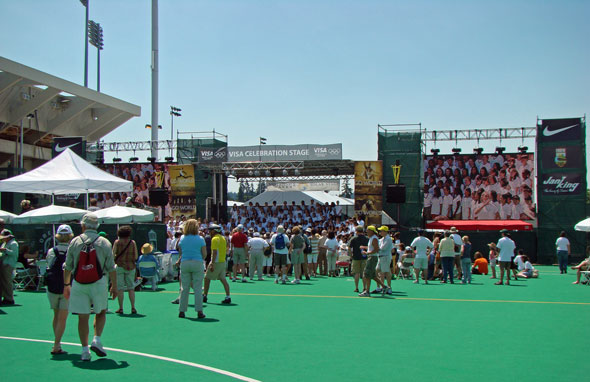 Ali & Rick took off to explore the festival. DT headed over to the temporary bleachers to check on a repair. I was assigned another important task: flattening piles of water bottle boxes and crates. What would this committee do without me?!

Just before the races started, I had lunch with Rick and Ali in the Sponsor Hospitality restaurant. Today they were serving chili and tuna sandwiches (which I thought was a most unappetizing combination) but the sandwiches were delicious. DT said he would join us... but he did not... so I grabbed a sandwich and was going to leave it on his laptop before I headed over to the track with Rick & Ali. But, just as we were approaching the event headquarters, DT walked/ran by with Vin. I gave him the sandwich and he ate it in about three bites. DT had eaten! Mission accomplished - we went to watch a few races. DT joined us later to watch the last half of the meet. 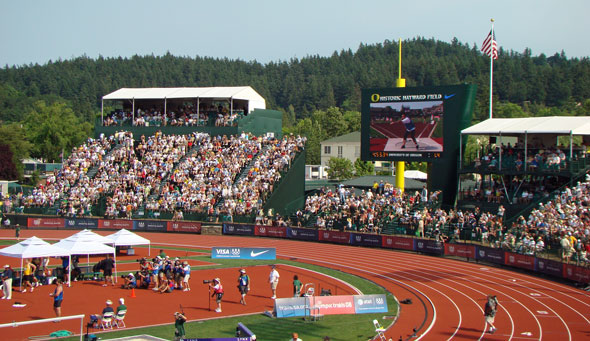 Hayward Field, in all her glory

The Devoted were treated to another spectacular day of The One True Sport. Tyson Gay set an American record in the 100m dash. In the quarter final. 9.77 seconds - and seriously, he let-up a bit the last two steps. Everyone went absolutely crazy in the stands with excitement. 9.72 is the world record. So close!

The 800m semi-finals were brutal. Ex-Duck Matt Scherer did not make it out of his heat, but Duck sophomore Andrew Wheating is running in the final. The fans just love young Wheating and they cheered wildly for him as he came around the last curve and sprinted towards the front of the pack. This guy is GOOD! In the second heat, Nick Symmonds made it into the final. It is going to be a fantastic race. 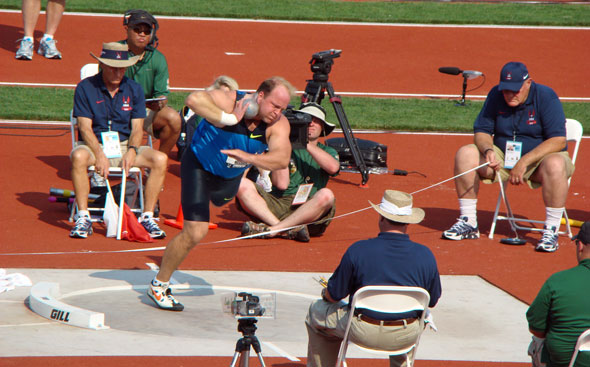 The men's shot put final was immensely entertaining - as we will send Reese Hoffa, Christian Cantwell and Adam Nelson to Beijing. A virtual Dream Team.

Muna Lee, Torri Edwards and (DT's favorite) Lauryn Williams will be representing the USA in the women's 100m. Darling Girl Allyson Felix did not make the squad - though we are sure she will make the 200m team and be entered in a relay.

After the meet ended, we headed back to the Festival area and had a light dinner with Rick and Ali before they headed back home. We were joined by a cast of thousands. 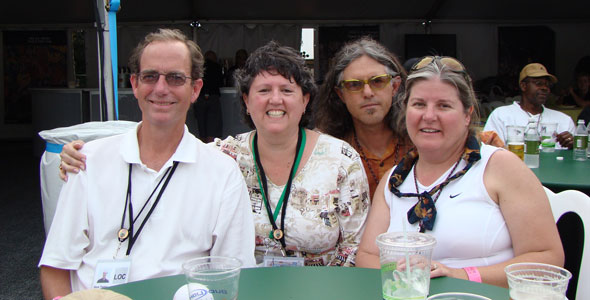 DT with our old friend, Dennis Olafson (head of meet referees and judges)

Rick and Ali headed home and DT headed out on his many-time daily walk-abouts. I went along again as he gathered his evening-end reports from security, catering, vendors, etc. Fascinating stuff to me. It was great spending the day with Ali & Rick. I think we have turned them into huge shot put fans! 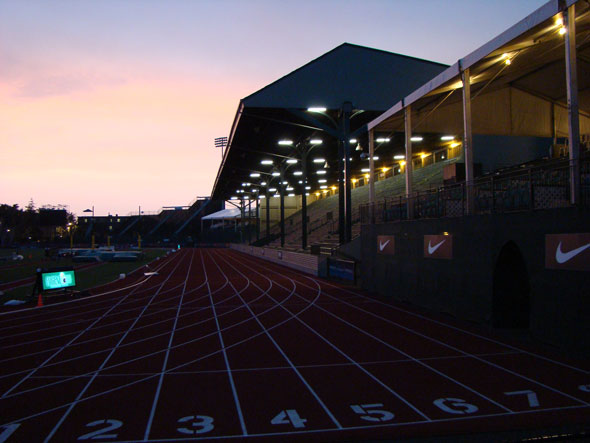 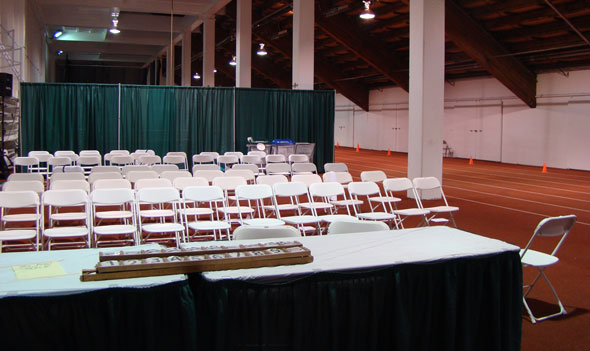 FINAL CALL: Under the grandstands -
the athletes gather here just before being escorted onto the track

As DT completed his circuit of the facilities, we saw lightning strikes. Then we heard thunder. Time to shut it down! There were over a thousand people still in the festival and the last band of the night was getting ready to take the stage. As soon as DT told him they were shutting-down the festival, the singer said OKAY - he did not want to go out there in a storm. In the photo below, all the white area is the back side of those huge video boards flanking the stage. If lightning would strike one of the video boards, it could be disastrous! Good night everyone - about one hour early. 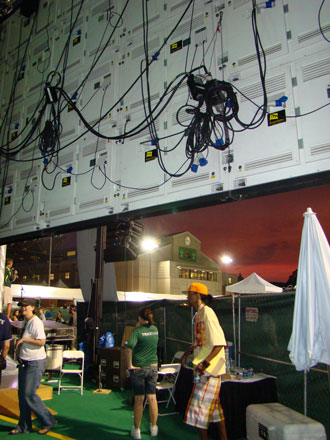 The backside of the video board

Things wrapped-up and we were able to get back to the motorhome before 11p! We were just getting ready for bed when DT's phone rang with the news that a strong wind storm had come through the track and had blown off the green mesh covering part of the temporary bleachers around Powell Plaza. He headed back to the track. Such is the duty of a volunteer. As I type this, a nice shower is tapping on our roof and I hear thunder and lightning off in the east.

Until my next update from Hayward Field, I remain, your stormy correspondent.

ADDED LATER: The damage was not as bad as first thought (it was dark and difficult to access). DT was back here and in bed around 1a. However, the wind left Hayward Field and headed over to our RV park! We had a terrible storm here last night - wind and rain. Gusts were so strong, I stowed the satellite dish and put in all the awnings. DT slept through all the commotion.

« Jumping in Just a normal day »