DAY 1 | Track Town USA: The first day has finished. Though there were a few logistical problems, most felt the first day was a success. The meet itself was fantastic and the fans were loving every moment of the competition. It was very hot in Eugene today - into the 90's. The crowds were a little heavier than expected on a Friday. Because of all the added temporary bleachers, Hayward Field set a new attendance record at over 20,000. Another 8,000 fans attended the adjacent festival. That's a lot of people! When I went on a walk-through with DT around noon the food vendors were wondering where all the people were. By four o'clock every vendor was completely sold out of food. At one point, during the races, over a thousand people were sitting on the grass watching the events (occurring 100 feet away) via a monstrously huge video board. It was awesome. DT was hearing (mostly) praise. 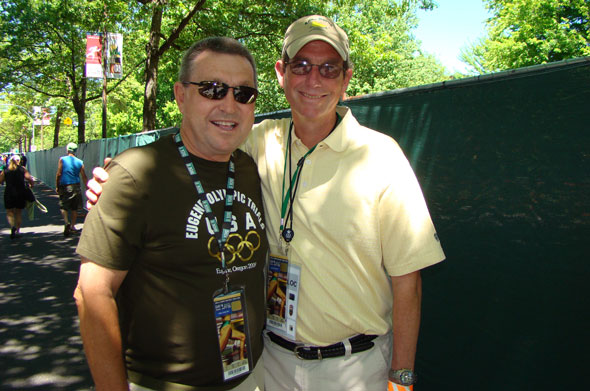 Look who we ran into at the entrance gate - Nellie, with a crew cut. You can take the boy out of Montana...

DT and I were at the Eugene08 office around eight o'clock this morning. DT went directly into a meeting and I was sent to a supply closet to organize wrist bands. Catering uses the wrist bands to determine who is supposed to be in which hospitality tent and if they are over 21 years of age, etc. Every day and area has a different colored band and they needed to be sorted. (Wow - I was right on this important task and did an excellent job. I was also hot, sweaty and a little dirty the rest of the day.) Later I was even sent up to the volunteer center to repair a printer! Is there no end to my talents?

Later, I grabbed DT and forced him to sit down and eat something. Since he didn't eat at the party last night - I was starting to worry that it had been over 24 hours since he had consumed anything (besides a few glasses of wine at the party last night) and didn't think that was a good idea. I could only get him to eat half a puny sandwich before he rushed off to solve another crisis.

Kathy, Woody, Mary & Steve stopped in to say hello to DT. It is so exciting that everyone is here for the meet. I just hope DT can get away from his desk/phone long enough to spend some time with our friends. 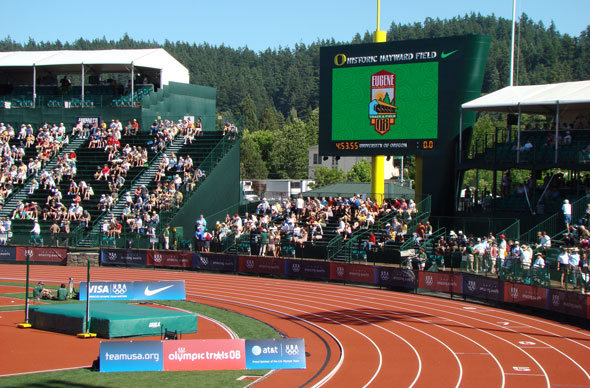 Before the meet - the crowd starts to fill the stadium. There was not an empty seat tonight.

At 5p we were all in our seats for the Opening Ceremonies, organized expertly by DT's Number One Assistant, Rob Vermillion. First there was a Chinese Dragon dance (the road to Beijing and all that) and then the 1980's team walked around the track as they were introduced. A choir from the Bach Festival sang the National Anthem and just as the anthem finished the National Guard (Klamath Falls) did a fly-over with two F-16's. The crowd went crazy!

We were seated just above the finish line, in the shade, with Marshevet Hooker's parents. Hooker (U Texas '07) won her heats in the 100m and will advance to the final. As if that isn't enough, the Hooker family has another daughter (still at UT) who will compete in the high jump. These people need to market their DNA.

DT and I have been waiting months for one race tonight - Dustin Emrani had qualified to run the 800m. His parents had flown out from Long Island for the race and Dustin had asked DT and I to sit with them during his race. We made sure to have great (shady) seats and the four us watched together. Dustin was in a very strong heat - Matt Scherer and Nick Symmonds also raced - but this heat turned out to be one of the slowest and only four runners advanced. Though he ran a very gutsy, strategic race Dustin finished 7th (it was a blanket finish) and will not advance. Still, Dustin ran in the US Olympic Team Trials - something he will be able to tell his grandchildren. Bets the hell out of sorting wrist bands.

The Ducks had an outstanding evening. Charming sophomore Andrew Wheating easily won his 800m heat and Galen Rupp won his 5000m heat. Tommy Skipper sucked big time in the pole vault and is going home early. But the race of the night was the women's 10,000m final. And the "race" in this race was not for first or second. It wasn't even actually for third. Amy Begley was going to get third place, but she did not yet have a fast enough qualifying time for Beijing. (Even if you are a champion in your own country, you can not run in the Olympics unless you have reached an Olympic qualifying standard sometime within the past year.) The crowd (being that it was an Eugene crowd) knew that Begley was going to cut it very close. If she could shave just a few seconds off her last few laps she would run faster than the required 31:45.00. The fans went absolutely nuts cheering for her and we carried Amy across the finish line with two seconds to spare! After she crossed the finish line we all asked, "who won?". We were so focused on Amy that we hadn't noticed! Such is the One True Sport.

Dustin joined us in the stands after his race. His foot was bandaged covering a very disgusting gash. Runner's feet should be banned from polite society. (I can say this from years of experience).

The meet was over, the crowds faded away and DT went back to work. I found Nellie, Donnie & Julie in the 100 Meter Club Hospitality Suite and we discussed the races and had a little critique session about the meet later when DT joined us for a beer before we headed home.

Overall it was a good day. Tomorrow I promise to take photos of the Festival and the crowds. Tomorrow I am going to find some food and force my husband to eat something - he can't work at this pace on half a sandwich and half a beer!

Until my next update from Hayward Field, I remain, your GO DUCKS correspondent.

« And so it begins An electric day »