And so it begins

DAY 0 | Track Town USA: The countdown clock sits at mere hours as I type this first report from the 2008 USA Track & Field Team Trials. Finally, all seems (nearly) ready to go! This morning I had a (top-secret high-security!) printing job to do for DT, then I went over to Command Central and accompanied DT on his "walk-about". The entire area is a hive of activity with trucks, golf carts and workers going every which way to get their booths, displays and restaurants ready for the opening tomorrow. 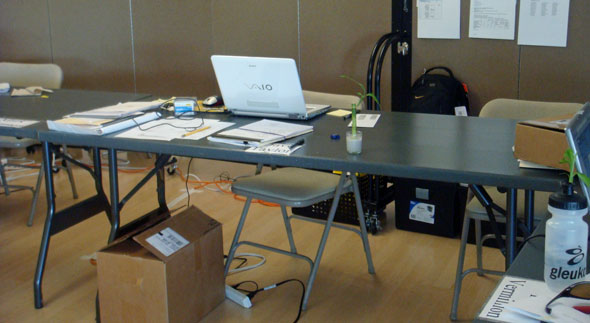 Command Central. How official. Notice I haven't yet removed the stickers from his new laptop?

Testing new video boards at the main festival area. Vendors are busy setting up their displays.

NIKE has set up an entire shop at the Festival - of course it is very cool (air conditioned too). 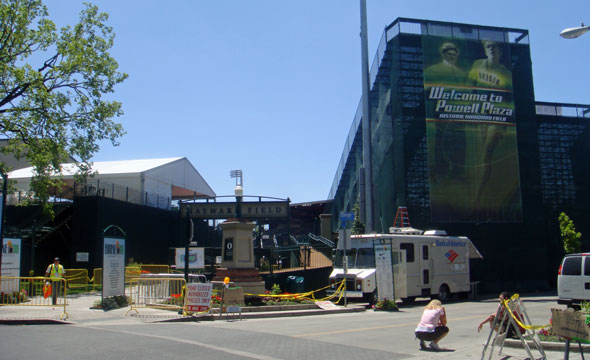 The main entrance to Hayward Field, Powell Plaza has been a bit refashioned for the Trials. 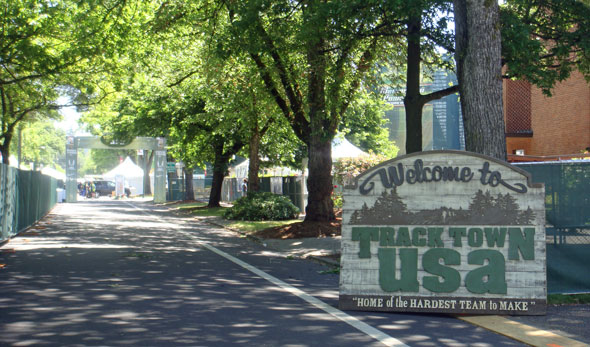 One of the entrances to the Olympic Trials

We left the secure area and went to where Michael's Catering (Phoenix, Arizona) operates the main kitchen which will feed thousands of people every day during the trials. The entire parking lot directly across from the hammer ring is now devoted to the caterer and various semi-trucks. Crazy busy here today with all the employees picking up their uniforms and receiving their marching orders. We did, however, get a nice little lunch.

After lunch DT gave me a tour of the recycling center. Everything used at the Olympic Trials is recyclable. My lunch was served in a bowl made from corn and I used a fork also made from corn. Very cool that the local organizing committee decided to really make the games as green as possible. Twenty thousand people a day for ten days can produce an immense amount of trash. There is a team of workers that actually go through each piece of trash, item by item, to ensure everything has been sorted correctly. 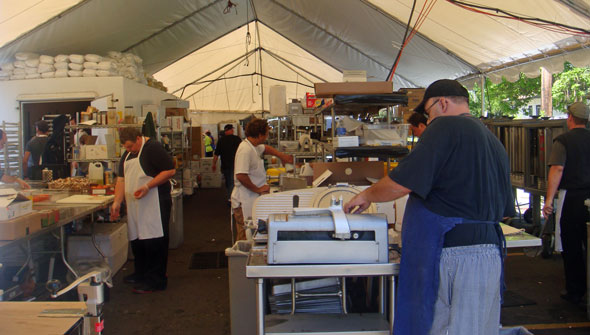 Something the fans will never see - the caterer's main kitchen 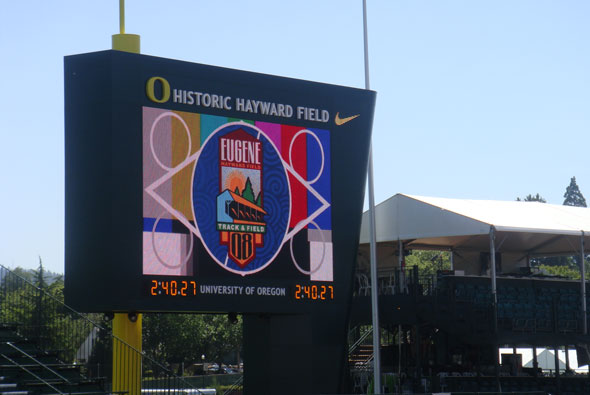 The view from Cap's Corner Castle

The temporary bleachers and another video board now in place on the east turn.
A few athletes were working out too, so that was fun. 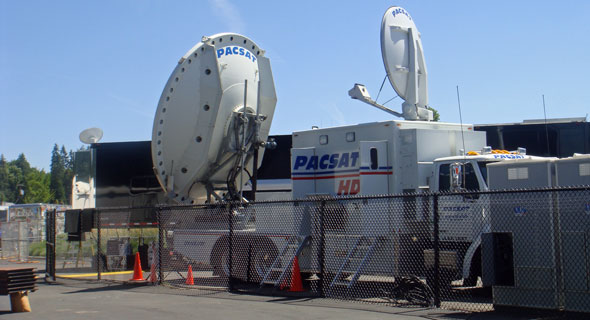 On the way to the media area, I snapped this photo of a few of the satellite dishes.
Think they are big enough?

I went over to the accreditation center and gave a complete stranger a ride to his hotel on my way back to the motorhome. He thinks Oregonians are very friendly.

In a bit, DT will come fetch me and we will head out to the party for the 1980 US Olympic Team. Check back later for that update. Do you think I will post a photo of Centrowitz... and his date - The Colonel???

Added much later: Well, Dear Reader, it is well past dark-thirty as I post these photos for you to read with your morning coffee (or tea). We did attend the wonderful party at the King Estate (completely hosted by King Estate by the way, so please pick up bottle or case of their delicious wine the next time you are out, will you?) celebrating the 1980 Olympic Team. Guests gathered for wine and appetizers and then the team was announced one-by-one. I had goose pimples several times realizing the caliber of athletes gathered on the 1980 team. Possibly the greatest team America ever produced never competed at the Olympics.

The Team to Nowhere. 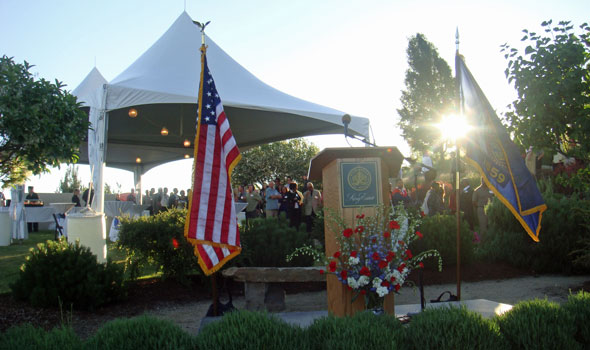 Behind the podium the 1980 team lined-up awaiting their introduction

Madeline Manning Mims sang the National Anthem. The first woman to ever run under two minutes in the 800m, Madeline represented the USA on four Olympic teams. From Tennessee State University, Manning Mims is the first (and still the only) American woman to earn the gold medal in the 800m.

It really was a magical evening in a magical setting. Here are more photos from the event. I realize a few of you may have flashbacks seeing these photos... I apologize. I claim no responsibility for hair loss or waist-line expansion. 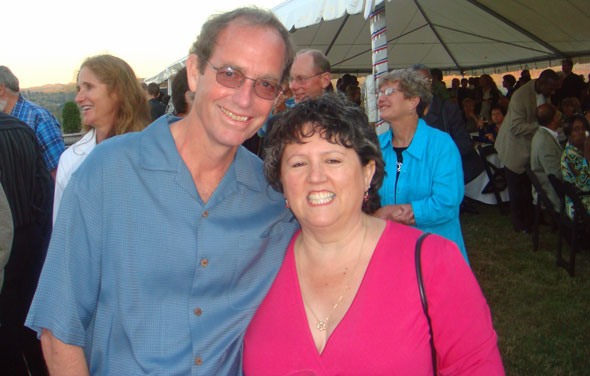 To get the hairline/waistline scenario off to a good start - let's begin with a photo of DT & me. 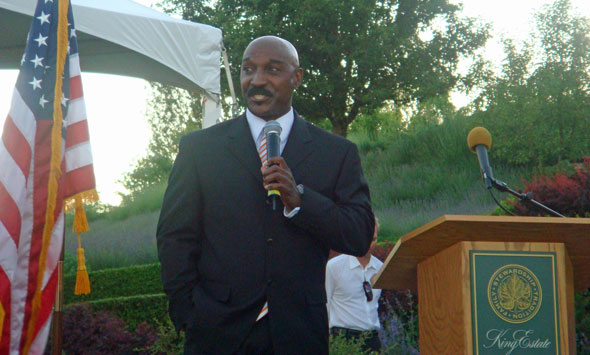 Harvey Glance looks better than ever and is still charming 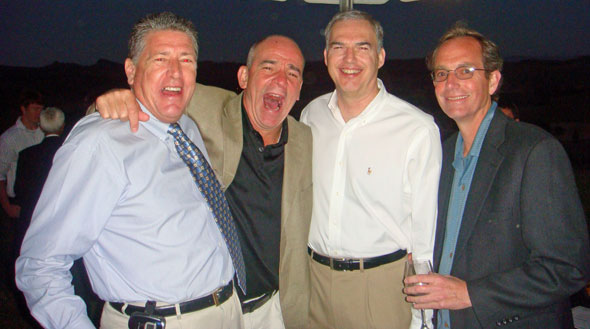 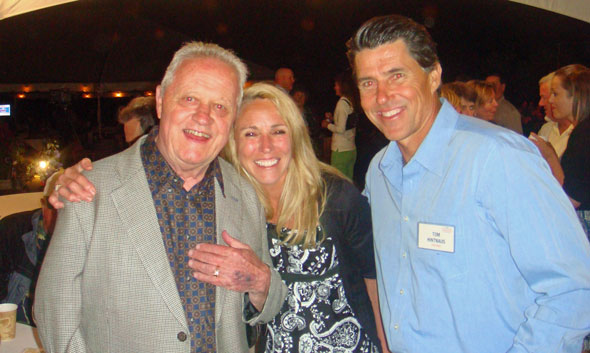 Don't try this at home: Our Beloved Dellinger with Mary Decker Slaney and Tom Hintnaus

After such a lovely party (and lots of lovely foods that we never were able to try) we decided to leave early to get some much needed rest. Ah, but as we came closer to Hayward Field, the lights beckoned and DT thought maybe it would be a good idea if he stopped by to check on a few things.

He needn't have worried. While we were enjoying the fete at the King Estate, thousands of elves had completed their tasks and the track - and the adjoining festival - were ready for opening day. 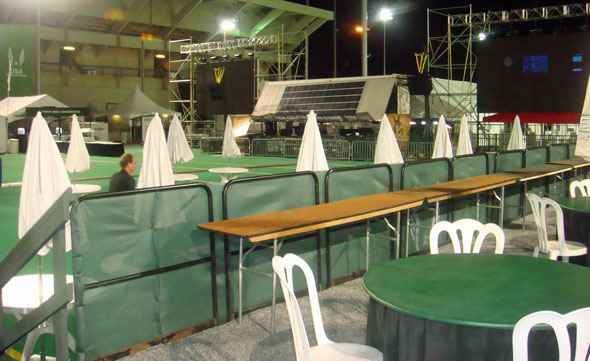 Tomorrow begins the best track meet in the world. Dustin runs in the 800m heats tomorrow evening - watch the meet on TV! Until my next update, I remain, your very ready correspondent.

« An owl comes to call Jumping in »