San Diego, California: Thanks to Readers who guessed why we are in San Diego for the weekend. Kudos to those who guessed we were here for the San Diego half marathon. (Extra points if you thought I was running and not DT... I appreciate your faith in me.) No, we are not here for the race, the Ducks are not in town, and our wedding anniversary is in July. We are here to see Mr. Buffett!

Since I cheated a bit with wording on the contest "rules" and wrote the prize would go to the "best correct guess" - not the first correct guess - the prize is going to "Pam" only because "Pam" said Leo was cute. (Hey, it's my website and I get to make up the rules.) Dear "Pam" - please send an email to terry@rvgoddess.com and I will tell you about your very fabulous prize as soon as I decide what your fabulous prize will be.

The weather was simply perfect in San Diego today. Sunny and warm and light wind. Great day for a stroll... first stop was breakfast at Cafe 21, where DT had very non-Kosher shrimp-potato pancakes with poached eggs and I had their version of stuffed French Toast. 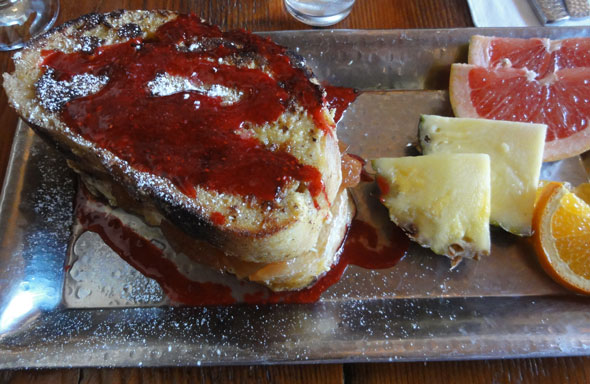 I ordered mine stuffed with organic apples and cream cheese. Strawberry sauce was poured over the top. It was delicious, but more like dessert than breakfast and I am more a "savory girl" than a "sweet girl". I managed to finish half of this huge breakfast. 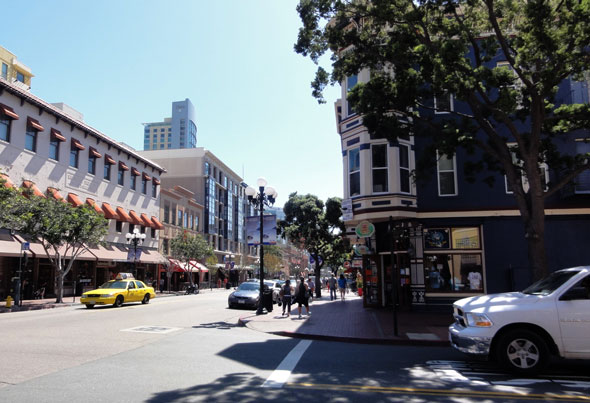 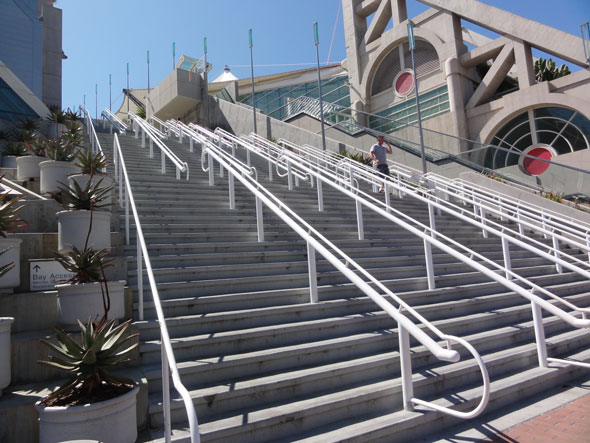 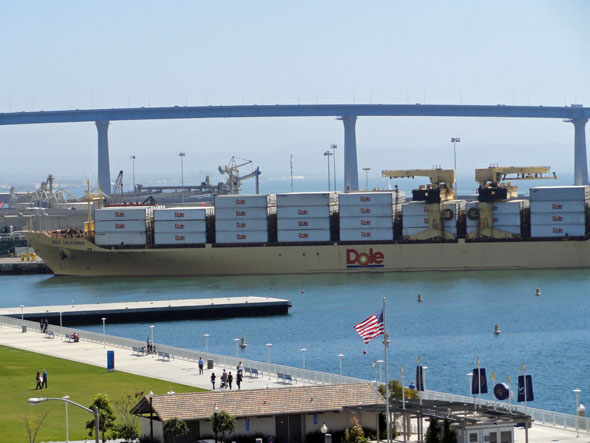 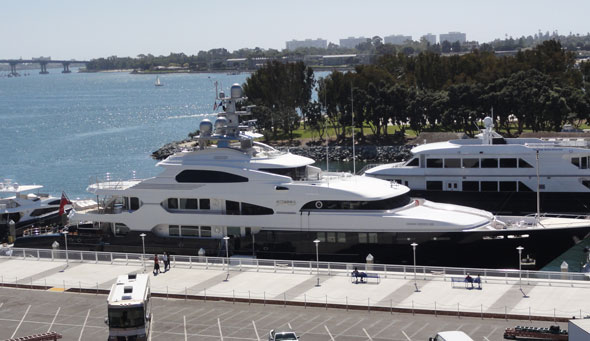 Gorgeous yachts were docked along the bay 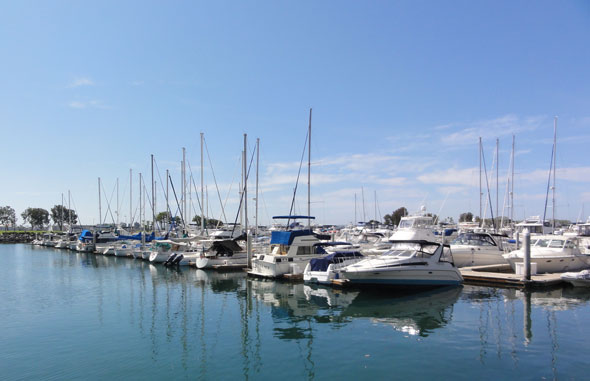 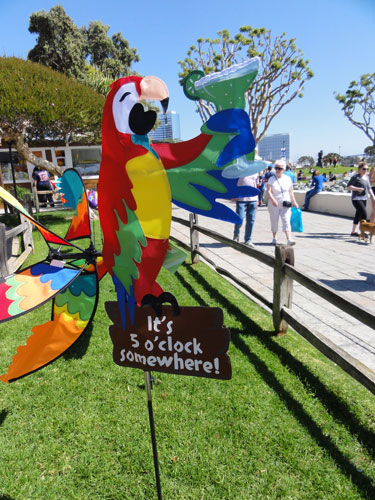 One of the shops in Seaport Village was getting ready for
the Jimmy Buffett concert tonight!

The Best Connected Daughter Ever arranged for us to have super-duper seats at the concert tonight. Did I ever mention how much I love Our Brown Eyed Girl? DT and I hopped on the trolley to Old Town, where we would need to change trains. We took this opportunity to find some tacos and that frozen concoction that made My Favorite Singer kinda famous. (The rest of today's photos were taken with my iPhone.) 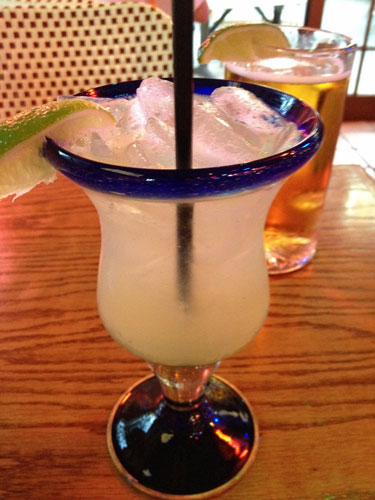 Grand Patron Rita from the Rockin' Baja Coastal Cantina.
(It's like TGI Friday's, but with a Mexican beach-shack twist.) 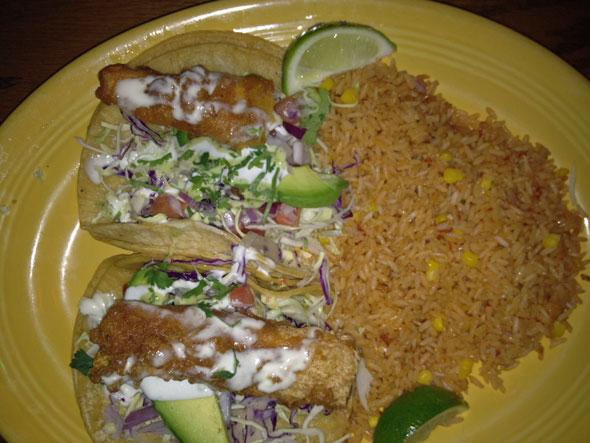 And why visit a beach shack unless you are going to eat some fish tacos? 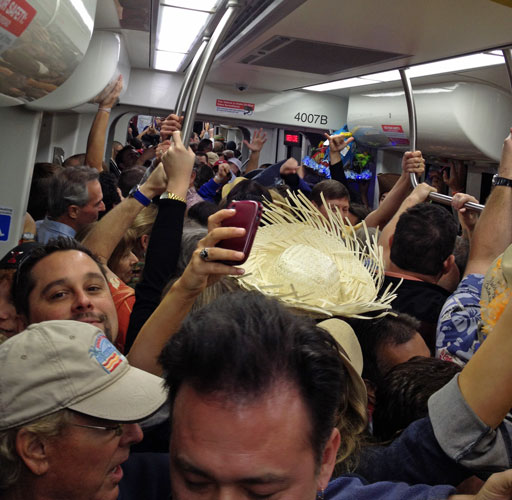 Back on the train, the situation was sardine-like. So many Parrotheads trying to get to the Viejas Arena (at San Diego State University). Everyone was in a good mood and the ride went quickly. 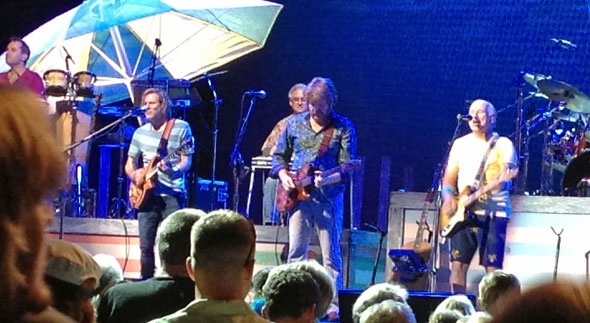 Our seats were in the 12th row. Hello Mr. Buffett! The stage show was less elaborate than most tours. Just the band, a few beach umbrellas and different tropical scenes being projected on the screen behind the band. All of the Coral Reefers were in attendance, but apparently three different percussionists wouldn't do, so James Taylor's drummer was also on stage. Since Jimmy knew I was there, for his last song, he sang Lovely Cruise, alone on stage, with only his guitar - just for me. So sweet!

We met several people at the show who were attending their first Jimmy Buffett concert. Jimmy is drawing-in a younger crowd via his collaborations with country singer Alan Jackson and the very popular Zac Brown Band. (Still, please note, there were more people on Social Security at the concert tonight than living off student loans.) After the show, DT was chatting-up four boys from USC visiting San Diego for Spring Break. One boy said the first time he heard Jimmy play was at "my Dad's 60th birthday party". The boys couldn't stay to talk because they had to "get back to the yacht by 10:30".

A limo was not waiting to take us back to our yacht, so we took the train back to our hotel. Unfortunately the ride was a ridiculous 90 minutes. The trains kept stopping and waiting on the tracks. They kept making people get off one train and loading them into another train. Get organized, San Diego train people. It said on your website that you are running additional trains after the Jimmy Buffett concert... where were these trains? By the time we returned to our hotel, it was just past midnight! Still, it was a wonderful evening - another great Jimmy Buffett show.

Until my next update, I remain, your wasted away again correspondent.
« Here We Are + an Impromptu Contest Weekend Update »