It Started with Wipers…

Portland, Oregon:  After a fantabulous Olympic Trials, we are home. Back in Portland. Unpacked. Semi-organized. But, good grief, what an long day... which started yesterday. 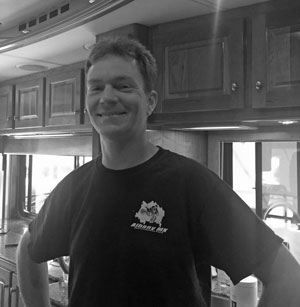 We had a few things that needed tweaking on the RV. Dave was working at Historic Hayward Field Monday, so I remained in the motorhome while our tech, Brian (pictured right), tended to a few tasks. The passenger-side wiper was not working. We made it all the way from Indio (did not use it due to decent weather), but knew the wiper harness needed to be replaced. Brian changed a few bulbs we could not access, reconfigured a few light switches and re-set our generator as it has been blinking with a fault code for several months.

I was able to fix one thing myownself! Somehow we did something to the safe (yes, Country Coach placed a small safe - similar to a hotel room safe - in their motorhomes) that caused it to freeze. Maybe we tried too many times using the wrong code? Maybe I messed everything up by replacing the batteries? Who knows, but after a few minutes on the phone with a tech from the safe manufacturer, the safe opened. (So, if you ever need to break into a safe, just call the manufacturer and they will walk you through how to open the door?) Whatever... Dave's passport is now freed from captivity.

Tempting fate by encouraging rain, we had our motorhome washed Monday afternoon. This was a huge risk. We are in Oregon. It rains all the damn time. We only had one wiper and a two hour drive home. Every time we have our bus washed, it rains. The rain curse really jumped up and bit us on the back side yesterday... the guys washing the RV broke the wiper on the driver side! REALLY??? No wipers at all now + a clean motorhome = guaranteed rain. Possible monsoon?

Not to worry. Brian had our back side covered. Brian was working on a bus at Premier RV of Oregon and agreed to meet us there to replace the wiper harnesses. Situated in property once occupied by Country Coach, Premier RV of Oregon repairs motorcoaches, sells used motorcoaches, updates television systems and remodels motorcoaches. It was a little like taking your baby back to the hospital where she was born. Our coach came out of this facility eight years ago.

Dave and I knew nearly every current employee, as most of the staff were previously Country Coach workers. It was great to see everyone again and we were happy they have continued to thrive in a town so devastated by the 2008 economy crash and Country Coach going out of business. It is amazing the brand is still so popular, though the newest Country Coach available is eight years old (like ours - one of the last off the production line). People still respect the quality that went into the brand. Yes, we have had a few issues with our coach, but they have been minor. We remain positive about our poor orphaned motorcoach and recommend the brand. 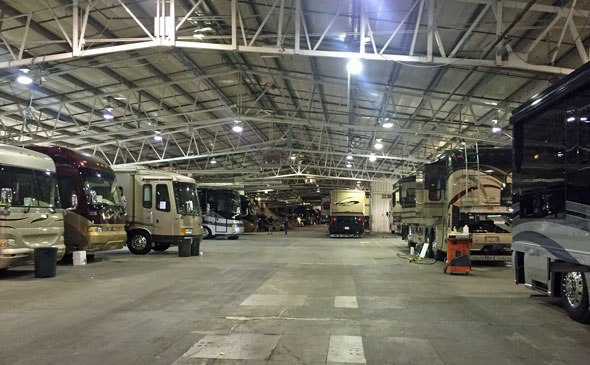 Brian gave us a tour, and installed TWO new wipers. 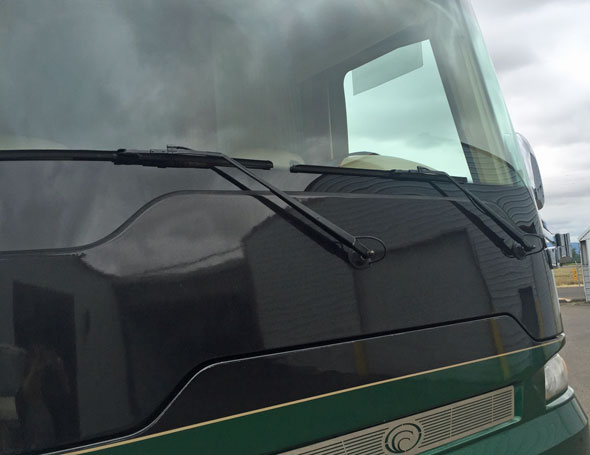 And then, like we should have predicted, our entry step would not retract! Again? At least if an entry step decides to not retract, it was our good fortune that it happened at a Country Coach repair facility. Brian found the disconnected wire and had it fixed within moments.

Because, he is, afterall, Brian. 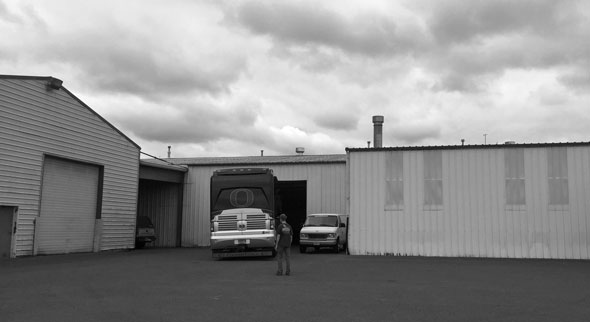 As we were backing out of the Premier RV facility, Brian knocked on my car window and thanked me for the recipes on my blog. Brian said they use several of my recipes and are especially fond of my Chocolate Chip Cookies. I was blown-away.

As long as we were in Junction City, DT next took the motorhome over to Les Schwab to have Paul look over our tires and tire monitoring system.

It was only 1p, but I was exhausted from ten days of The One True Sport. We still had a two hour drive to Portland, and we had two cars. Dave towed the Jeep behind the motorhome, and I followed in his 16-year-old Chevy Tahoe... meaning I had to drive a truck with no bells, no whistles. AM/FM radio only. No hands-free phone system. No satellite radio. No GPS. I may as well have been driving a mule-pulled cart. When will he ever get a new car???

It did not rain all day.

We arrived home, unpacked, had a lovely mushroom risotto and went to bed.