TrackTown, USA:  Saving the best for last? The last day of the 2016 US Track & Field Trials was filled with fantastic finals, fabulous fans and just a little rain. It was also a day to take a lot of photos with friends. 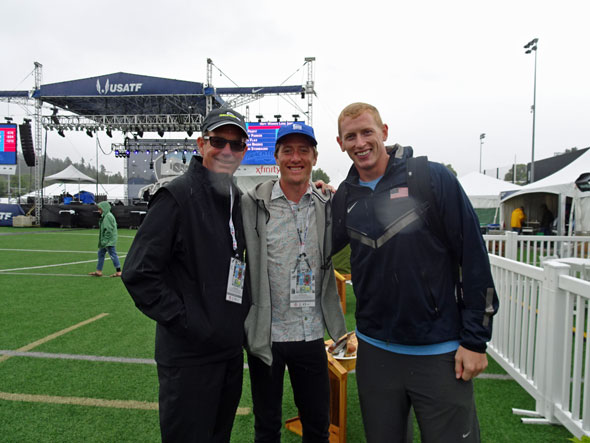 DT, posing with fellow TrackTown USA staff member, Calvin (remember when Calvin went to the Great Wall of China with us?), and US Javelin champion, Cyrus Hostetler. Cyrus is heading to Rio to throw the javelin. All three men are Duck alums.

Teams were selected today in the women's heptathlon, pole vault, 400m hurdles, 5000m, 1500m and 200m. A very surprised stadium saw America's Sweetheart, Allyson Felix, finish 4th and not make the 200m team. Ms. Felix had planned to double in the 400m and 200m in Rio... but a very surprised and very happy stadium realized Duck sprinter Deajah Stevens and Duck alum, Jenna Prandini (who somersaulted across the line) had made the squad, with Tori Bowie. Sophomore Deajah Stevens is the first Duck woman to ever make the US Olympic Team while still in school. 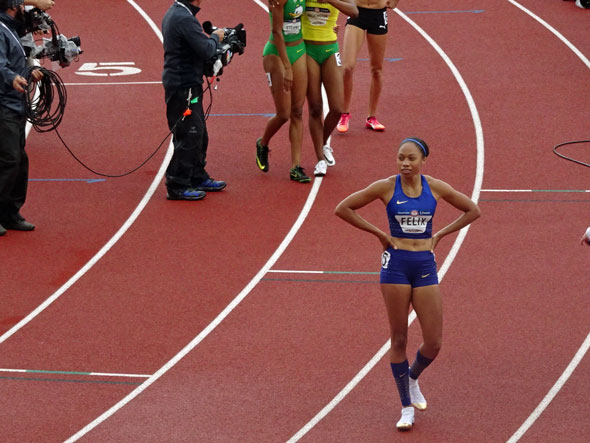 Not sure Allyson Felix has ever finished fourth. Ever.

The women's 1500m was another nail-biter. Lots of pushing, nudging and near-trip-ups, causing the crowd to swoon with tense energy. In the end, girls went flying - literally - over the finish line. Brenda Martinez was splayed over lane one, spent and crying, before hearing her name called as the third-place finisher. (See an amazing slideshow of the race from the Eugene Register-Guard.) Brenda will go to Rio with Jenny Simpson and Shannon Rowbury.

Men's final events included the high jump and 400m hurdles. The hurdles were another event where one of America's longest-running medalists failed to make the team. Bershawn Jackson finished 7th behind Kerron Clement, Byron Robinson and Michael Tinsley, and will not be on his third Olympic team.

No one would be surprised to learn Matthew Centrowitz won the men's 1500m final and will be on his second Olympic team. It was the other dozen men racing with Centrowitz who were the wild cards. This field was so deep - any of the men could have made the team, and six of them were Duck alums. Another favorite, Ben Blankenship, trains in Oregon and dates a member of the TrackTown USA staff. So much stress! I basically wanted EVERY racer to make the team... but that just can't happen.

The race went out fast. There was some jostling, but no one tripped or fell. At the final home stretch, Matthew was the easy winner, with Robby Andrews following. Ben Blankenship and Leo Manzano were neck and neck for third, until Blankenship looked to his right to see Manzano trying to pass and found another gear, flying in to finish third and earn a trip to Rio. Sorry Manzano. 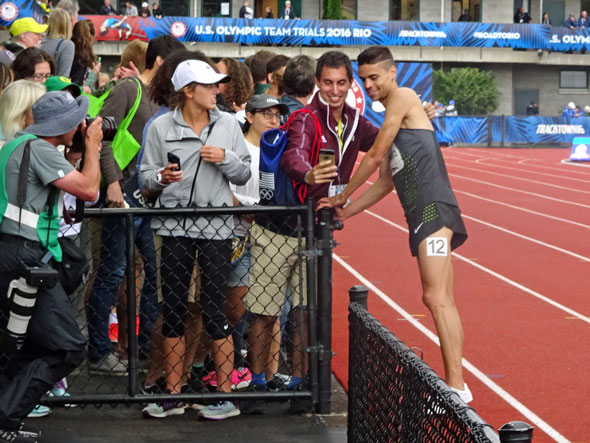 Matthew Centrowitz, posing with fans after his victory 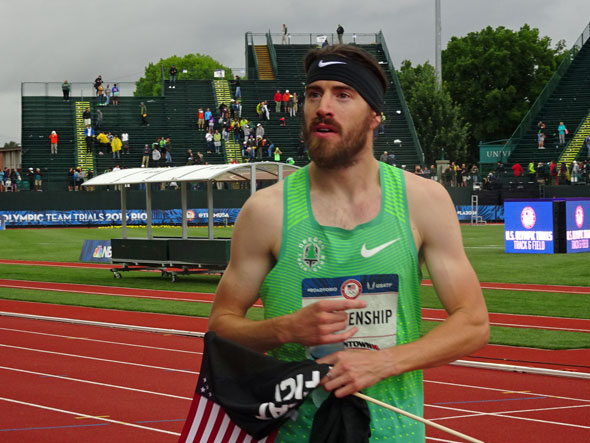 Ben Blankenship, after his victory lap

Suddenly, after ten long days, the Olympic Trials were over. What an amazing event and what an amazing team the US is sending to the Rio Olympics. Congratulations to everyone who participated.

Congratulations as well to a record-number TEN Ducks who have made the US team: Devon Allen (110m hurdles), Matthew Centrowitz (1500m), Cyrus Hostetler and Sam Crouser (javelin,), Ashton Eaton (decathlon), Phyllis Francis (400m), English Gardner (100m), Galen  Rupp (10,000m and marathon), Jenna Prandini and Deajah Stevens (200m). The University of Oregon could enter these ten as a country in the Rio games.

Congratulations and great thanks to the staff at TrackTown USA for planning and hosting the best Olympic Trials (since the last two Olympic Trials) ever. It clearly takes a talented and dedicated group of people to organize an event of this magnitude and the energy of this team is limitless. Their enthusiasm is contagious - yet they still managed to have fun and are still speaking to each other after months of non-stop work. What a pleasure it is to know you all. 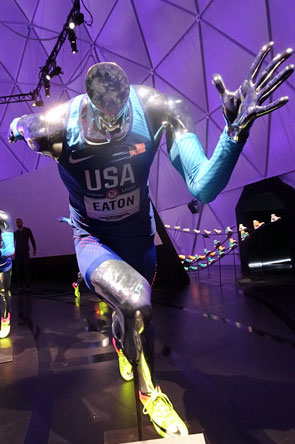 Over ten days, fans rode nearly 10,000 miles on stationary bikes and made it to Rio de Janeiro, Brasil - and NIKE revealed the USA Olympic Team uniform.

After the meet, we gathered with friends in the hospitality tent and took photos together. 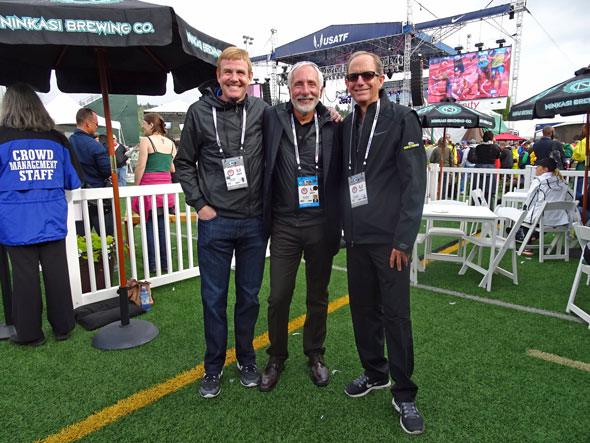 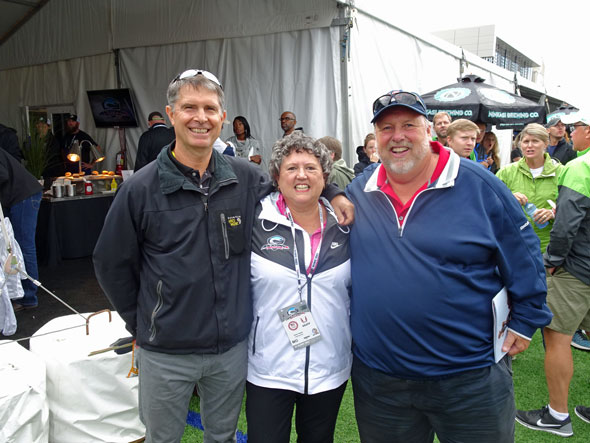 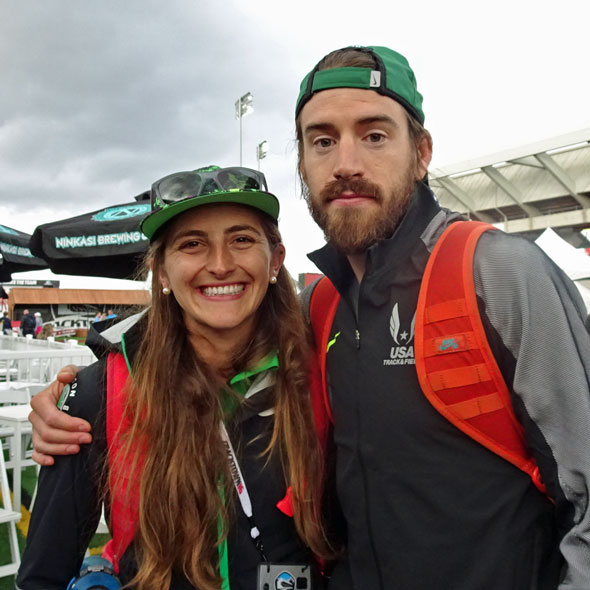 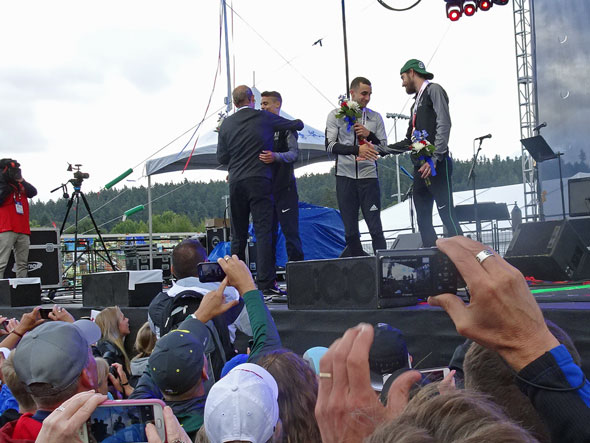 While it is not customary to hug a medal recipient, DT and Matthew embraced during the ceremony. 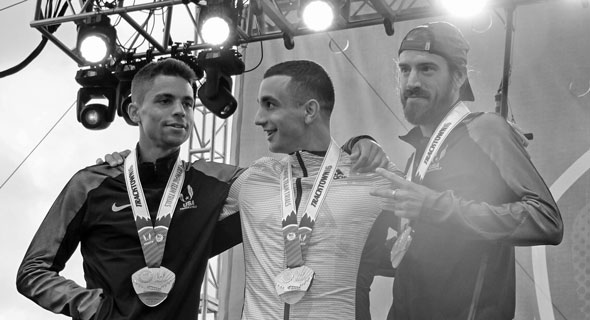 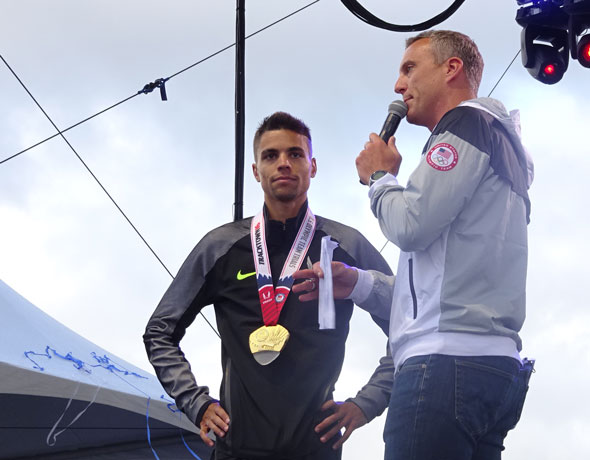 Matthew Centrowitz, being interviewed on stage by Rob Vermillion 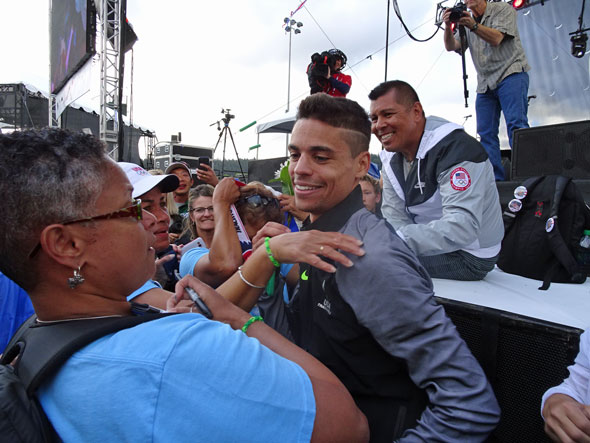 Matthew greets his family - Centro Nation - after the medal ceremony. His Mom is behind Matthew, placing his gold medal around her neck. 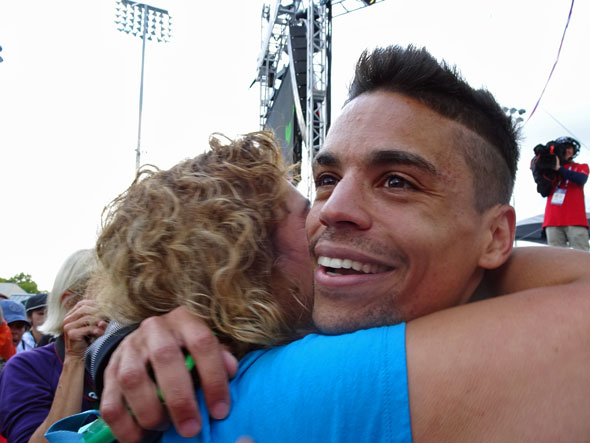 A very happy group of family and friends

And then we went home.

You may also like:
Official results
From NBC: How to Watch the Rio Games