London, England:  Day nine? You may be wondering if this series will ever end. I am pretty-much thinking the same thing, but, Dear Reader, the end is near. Tomorrow is the final day of the championships. It's a long slog for a fan. It must be brutal for the athletes. Especially sprinters who have long-since finished their races, but must stick around for the relays, which always conclude the last two days of the competition.

Carolyn and Tamra again spent the morning touring around London with Tamra's cousin. It was just me and the three guys at the track this morning to watch the relay heats and decathlon. 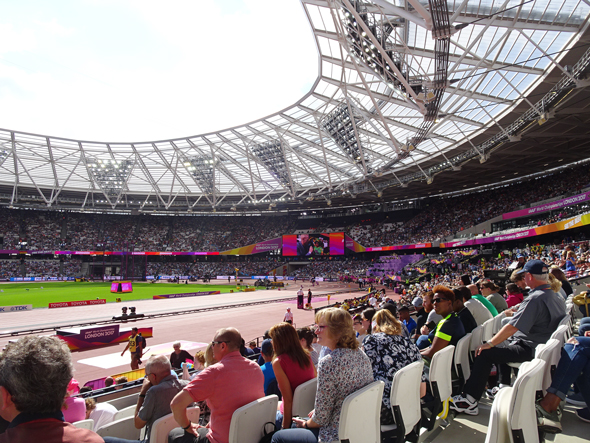 Our seats this morning were not in our usual section, but one section closer to the finish line and down a few rows - also great seats. It was sunny and warm this morning in London Stadium.

The men's 4x100m relay heats were, as usual, very exciting. The London crowd go mad when Usain Bolt steps onto the track. Everyone just loves him. Justin Gatlin didn't get too many boos this morning - probably because he was on a "team" and not racing alone. 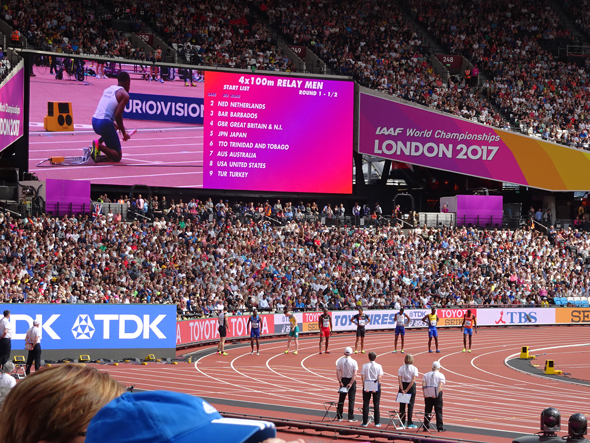 Not an empty seat on a Saturday morning 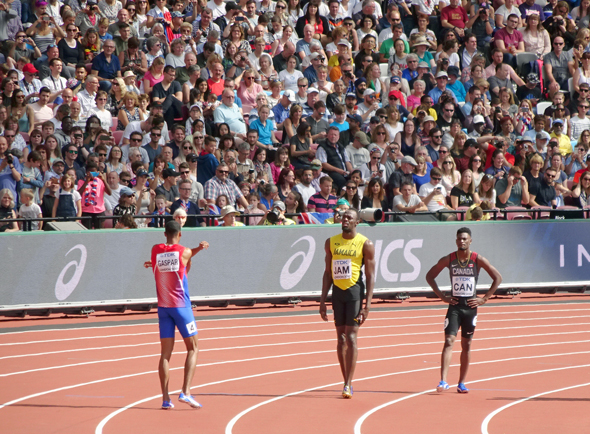 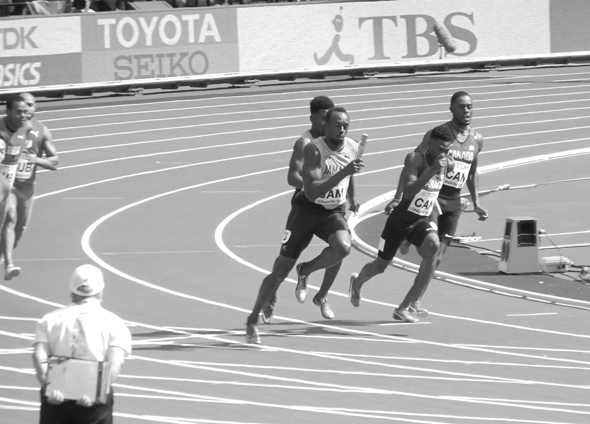 Jamaica and America made it to final later tonight. Other teams advancing include Canada, Turkey, France, Great Britain, China and Japan.

The US women 4x100m squad will face The Netherlands, Trinidad & Tobago, Great Britain, Germany, Jamaica, Brazil and Switzerland. Both American relay squads finished with the fastest times in the heats.

American women and men also advanced to tomorrow's 4x400m relay. The women's team from Botswana set a new national record in their heat. 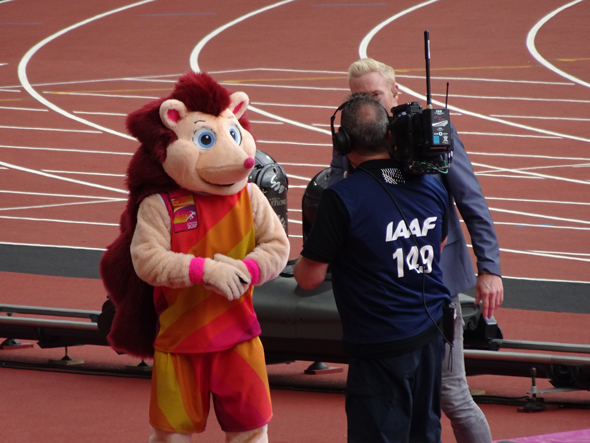 I have yet to post a photo of Hero the Hedgehog - the official mascot of the 2017 IAAF World Championships. He is quite a funny fellow, pulling all sorts of pranks. Today he kicked the TV presenter in the backside, then planted a beach umbrella in the long jump sand pit, and pulled a bag of sand toys from a duffle bag. Next, Hero grabbed a toddler from the stands and they built a sand castle together. Hero was selected through a contest held for kids on a British television program.

I am sorry to report American decathlete, Trey Hardee, fell during the 110m hurdles, was DQ'd and has left the competition. Americans Devon Williams and Zach Ziemek remain.

After the relay heats concluded, the four of us took the train back to the hotel and walked to a nearby pub for - guess what? 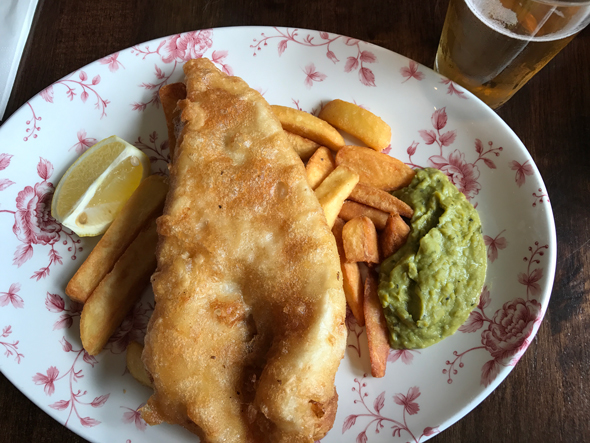 After a rest, and a little needlepointing, it was back to the Olympic Park for the evening session. The decathlon finished this evening with Kevin Mayer (France) taking gold. American Devon Williams finished the ten-event contest in 10th place. Zach Zeimek didn't show up to the 1500m start.

Everyone was standing for the entire 5000m final this evening - Mohamed Farah's last 5000m race and actually his stated "last race" on the oval. 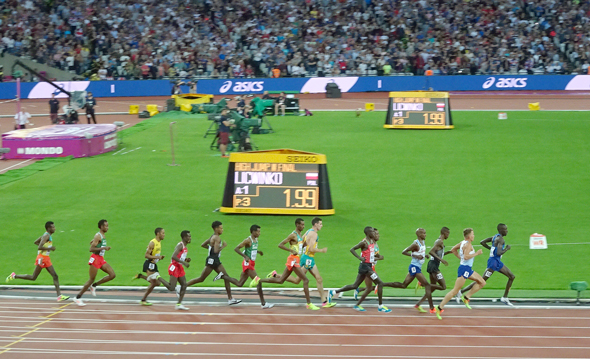 Farah is racing in 4th position above, in white singlet

The pace was slow, the pack remained tight. In the end it would be a kickers race. 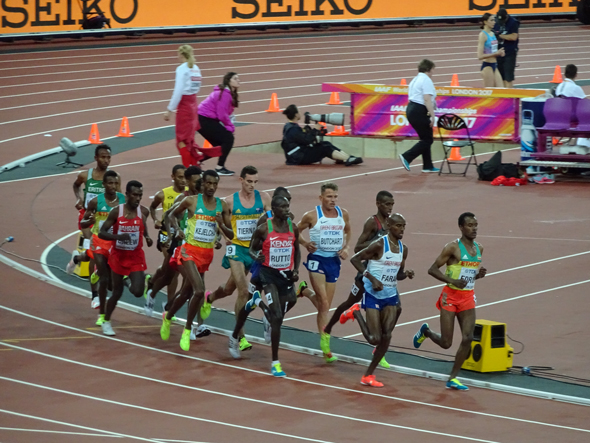 Muktar Edris (first position in above photo) had more kick than Mo Farah tonight. (Maybe because Edris had not raced in the 10000m last week?) No matter, Mo Farah won the silver medal on his last track race. American Paul Chelimo (who runs for the US Army) won bronze. The time was nearly a minute slower than the current world record, but this was the first time Mo Farah has lost a global championship in six years. 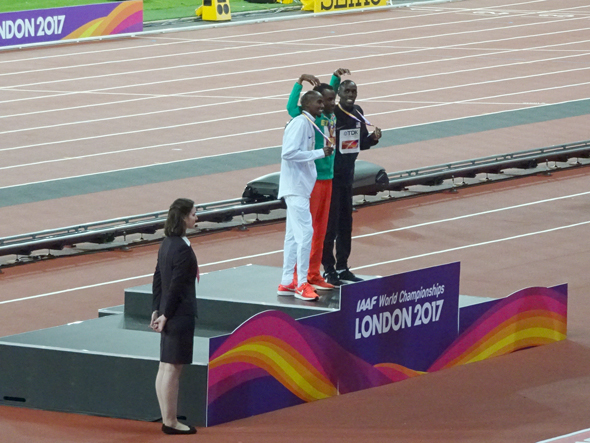 Farah, Edris and Chelimo do the "Mo-bot" on the award podium

There was no trouble during the women's 4x100m final. The American women - Aaliyah Brown, Allyson Felix, Morolake Akinsun and Tori Bowie brought the stick around in smooth perfection, again taking the gold medal, besting Great Britain and Jamaica in 41.82 seconds. It was the fastest time in the world this year... but relays are not often raced except in big championships, so let's just say, the ladies were fast tonight.

As were the men. The final event on the track tonight was the men's 4x100m relay, with Usain Bolt running the anchor leg for Jamaica. The fans just love Mr. Bolt and the field was electrified with excitement as he entered London Stadium. The American squad tonight included Michael Rodgers, Justin Gatlin, Jaylen Bacon and Christian Coleman.

Wild cheering as the teams carried the baton around, with tight milli-seconds separating the teams as the last sprinters took the stick for the final 100m straight-away. Would it come down to a sprint-off between Jamaican Usain Bolt and America's Christian Coleman?

Then something went horribly wrong. Usain Bolt fell onto the track mid-way down the straightaway. 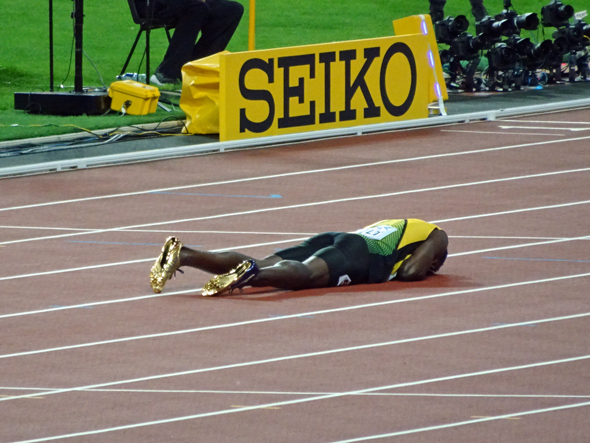 I'm not sure that I actually saw the exact finish because the eye was captivated by this hugely tall man writhing in pain on the track. Great Britain won gold, the US team was second, Japan won the bronze. Jamaica did not finish. I'm very happy the World Championships were not held in Las Vegas - a lot of money would have been lost this evening.

The crowd were elated with the British victory, yet torn due to Usain Bolt splayed-out on the home stretch. There was a bit of drama, with Mr. Bolt remaining down for quite a while, a large contingent of medical staff appearing - even a cameo role by a wheelchair - but the Champion finally rose on his own and hobbled off with his teammates, $80,000 poorer, to appreciative roars from the fans. The "last race on a track" scenario did not play out as planned for Mr. Bolt and Mr. Farah this evening. 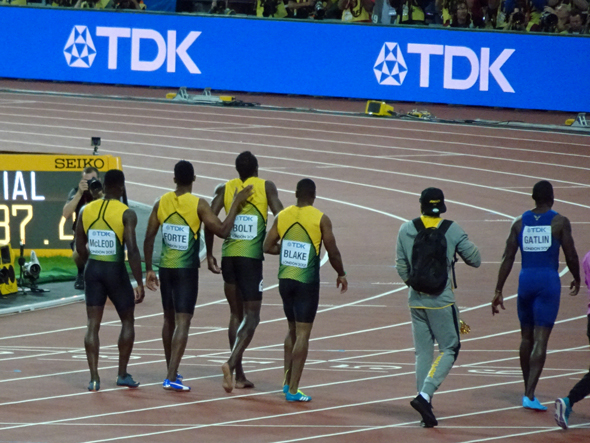 All finals tomorrow, the final night, including the 4x400m relays.

Until my next update, I remain, your one-more-night correspondent.