London, England:  The last day of competition - and a beautiful warm sunny Sunday in London. Dave and I had a lazy morning - the first without needing to set an alarm - and met our friends for lunch at the same French place we visited a few days ago, Cafe Rouge.

You will not be surprised to learn we will be celebrating this trip with "Vegan September" once we return home.

After lunch, Dave and I were given a behind-the-scenes tour of the underbelly of London Stadium. It was fascinating and so interesting to see how this meet is organized and how much work is required to have an event of this caliber run smoothly. The fan sitting in his/her seat knows nothing of the entire ant farm working below. 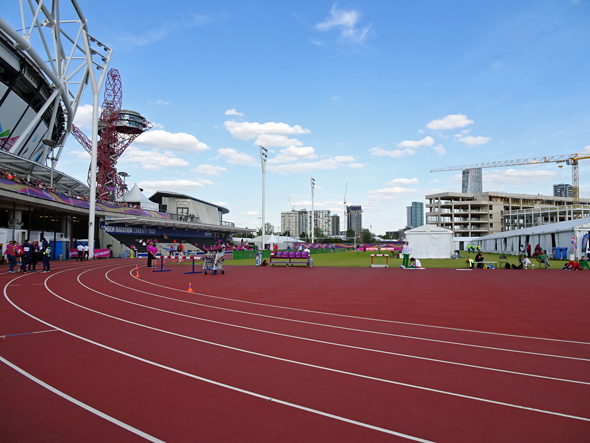 Practice/warm-up track just outside London Stadium. Each country has a little white tent, and there are practice, weight room, and medical facilities in this area where the athletes can warm-up before their event.

On the track: the finish line area. 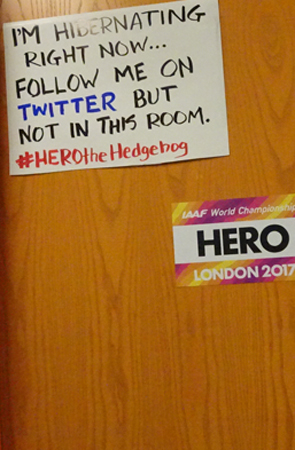 This mascot has been a huge hit during the Championships. We learned he is "played" by two NBA mascots, especially hired for this gig. Tonight Hero entered the stadium via a zip-line from the top of the arena. 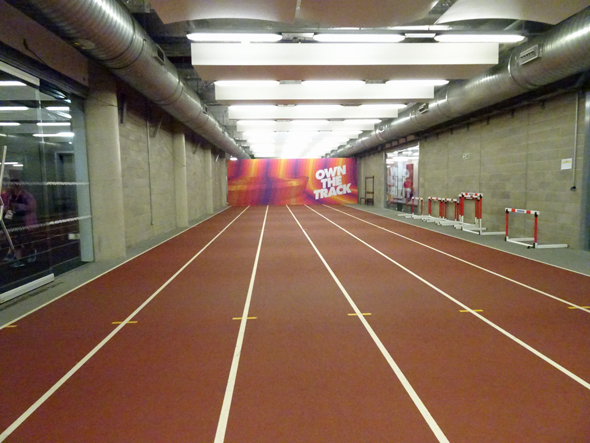 Another warm-up area, just before the athletes enter the stadium 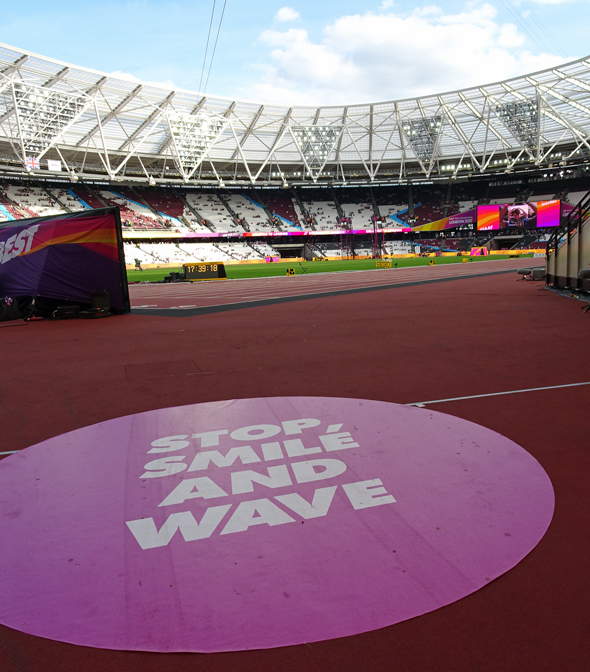 This reminder greets the athletes just as they leave the tunnel and enter London Stadium to thousands of cheering fans. Final events are introduced with fireworks. Fancy. 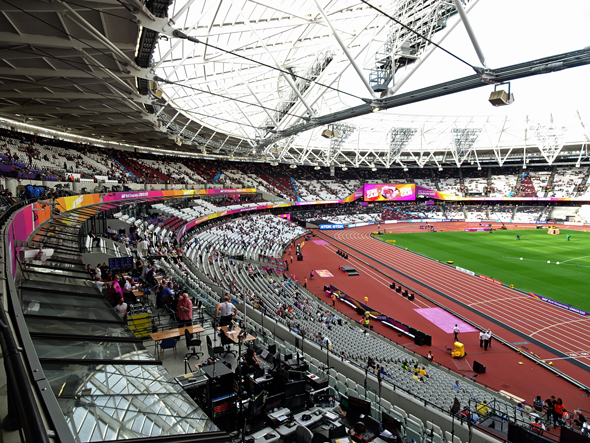 The stadium from the media area - fans have started to arrive.

I was fascinated by the tour, which included the media areas for photographers and writers (along with help desks set-up by the major camera companies for advice and repairs), miles and miles of electrical cables, and a room where the medals and flags are prepared for the medal ceremonies. The name of the medal winner is engraved immediately before the award is placed around her/his neck and a woman was in a room ironing each flag before it was placed on a flag pole.

Then it was time to get one last glass of rose from my favorite hospitality bartender, Mamadou (mah-mah-dew), and make our way to our seats for the last night of the Championships. 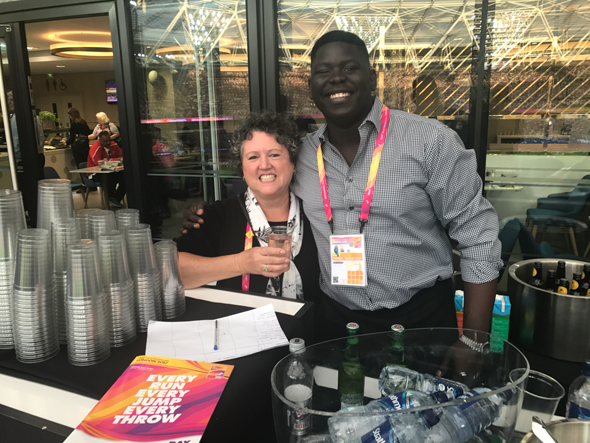 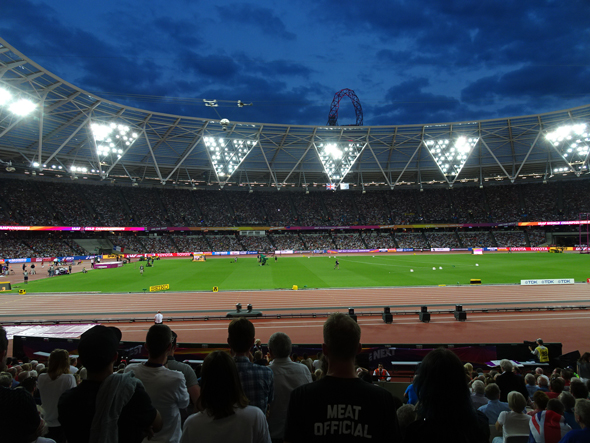 A beautiful night for Track & Field 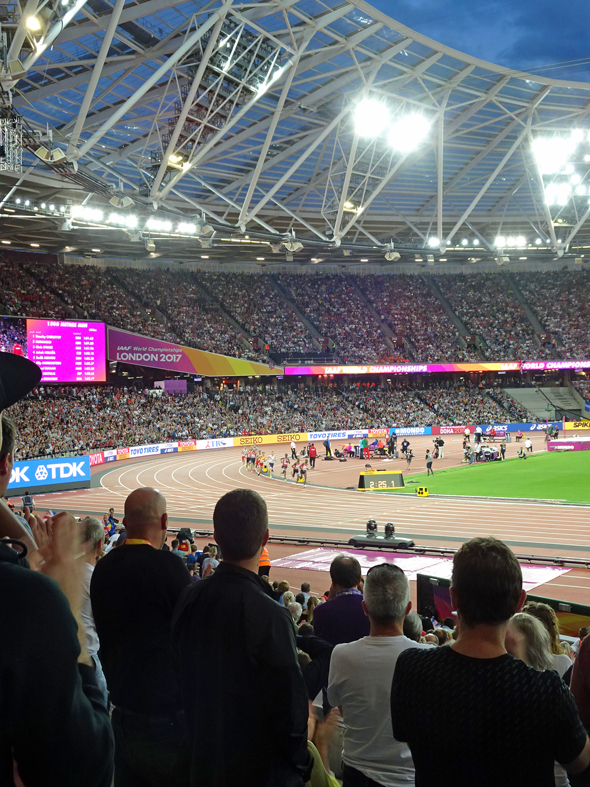 Every event is a final on the last evening of competition. 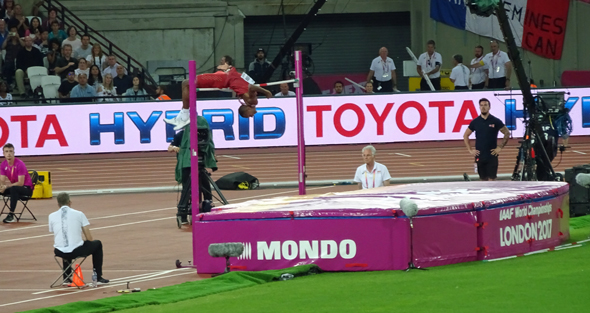 All three American women failed to finish in the top-8 places in the 5000m final, in a slow-paced start. Hellen Onsando Obiri of Kenya won gold. Sifan Hassan, who trains in Portland took the bronze. No one was surprised that Caster Semenya (South Africa) won the 800m. American Ajee Wilson won bronze. It was not the night for America in the men's 1500m either. Elijah Motonei Manangoi and Timothy Cheriuyot of Kenya won the gold and silver medals. Filip Ingebrightsen of Norway won the bronze. American/ex-Duck John Gregorek finished 10th. 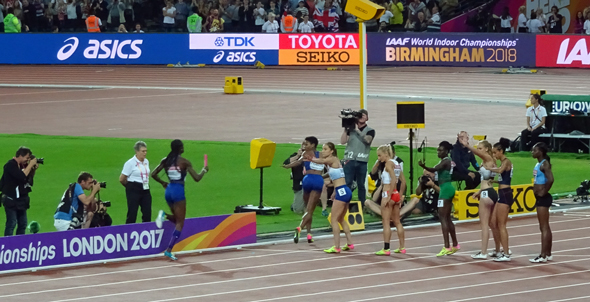 Last leg: Wimbley passes the baton to Francis in the 4x400m relay.

The 4x400m relays were the last events. The women ran first, with the first leg being very tight and the US not in first place. That was until first-leg racer, Quanera Hayes, passed off to Allyson Felix and Felix took off so fast, she blew-past all other competitors, giving the US such a large lead, it was impossible for the other teams to ever catch up. Felix (her parents and brother sat in the row behind us tonight, so that was fun) handed-off to Shakima Wimbley and then Duck-alum Phyllis Francis brought home the gold for the USA. The UK finished second, with Poland taking the bronze. Jamaica dropped out.

As in the 4x100m relays, the US women win the relay and the men come in second. The US men placed second behind Trinidad & Tobago, and the UK placed third. With Great Britain doing so well in the relays, the crowd went wild after each race. So much fun in the stadium tonight. It was a great meet. The British people was so welcoming and friendly. The stadium worked like a well-oiled machine, with thousands of volunteers aiding in the flow. The food was good, the wine was cold, the staff were fantastic. The shuttles, trains, buses and subways worked well to get fans to/from the stadium. Only the weather didn't always cooperate, but there is nothing to be done about that. The US won the most medals and DT will tally the "Duck Medals" before too long. Most important - Dave and I had a great ten days with friends! Until my next update, I remain, your Championship correspondent.